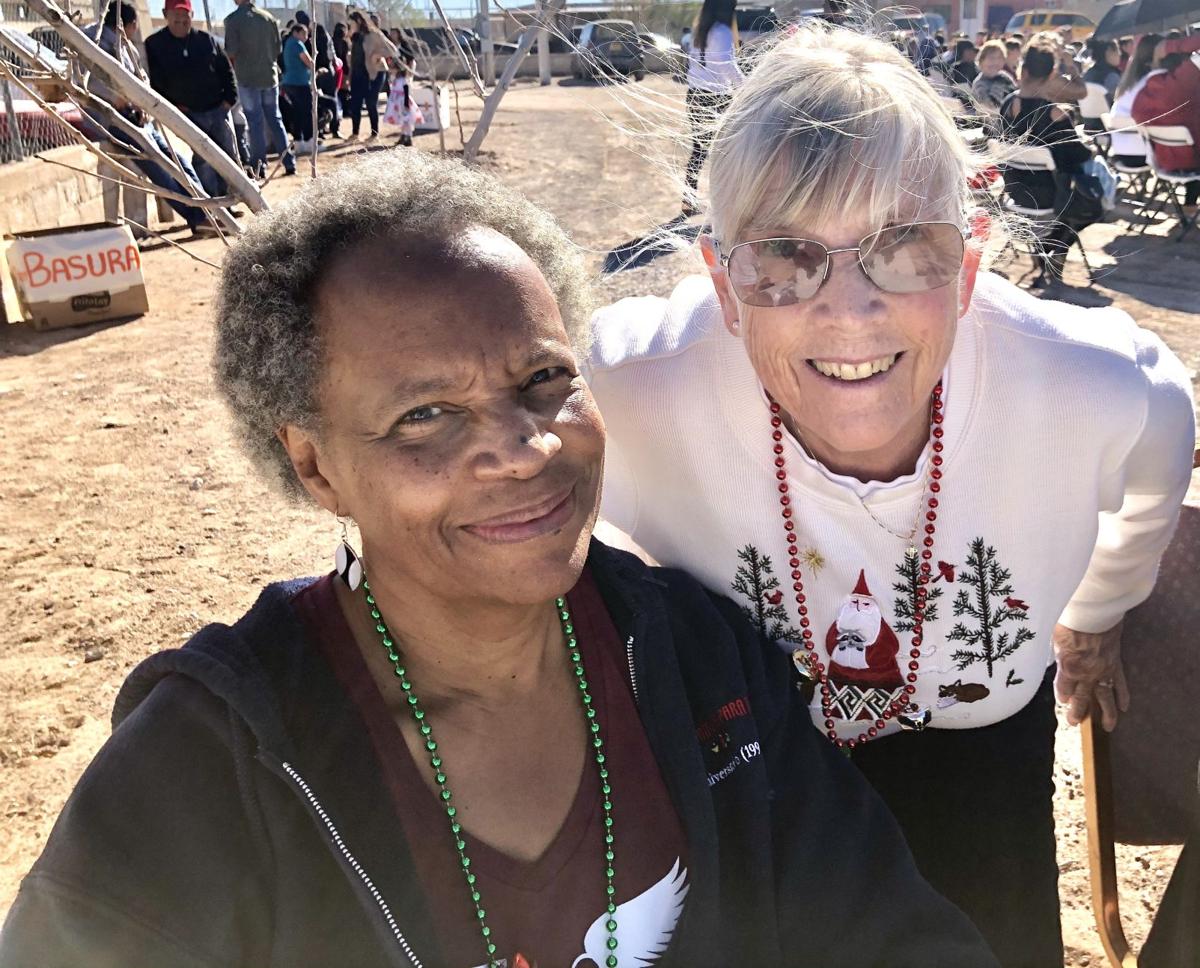 Pat Noble with a volunteer at La Casa de Amor para Niños before the pandemic. She founded the organization with her husband in Palomas, Mexico, more than 20 years ago. 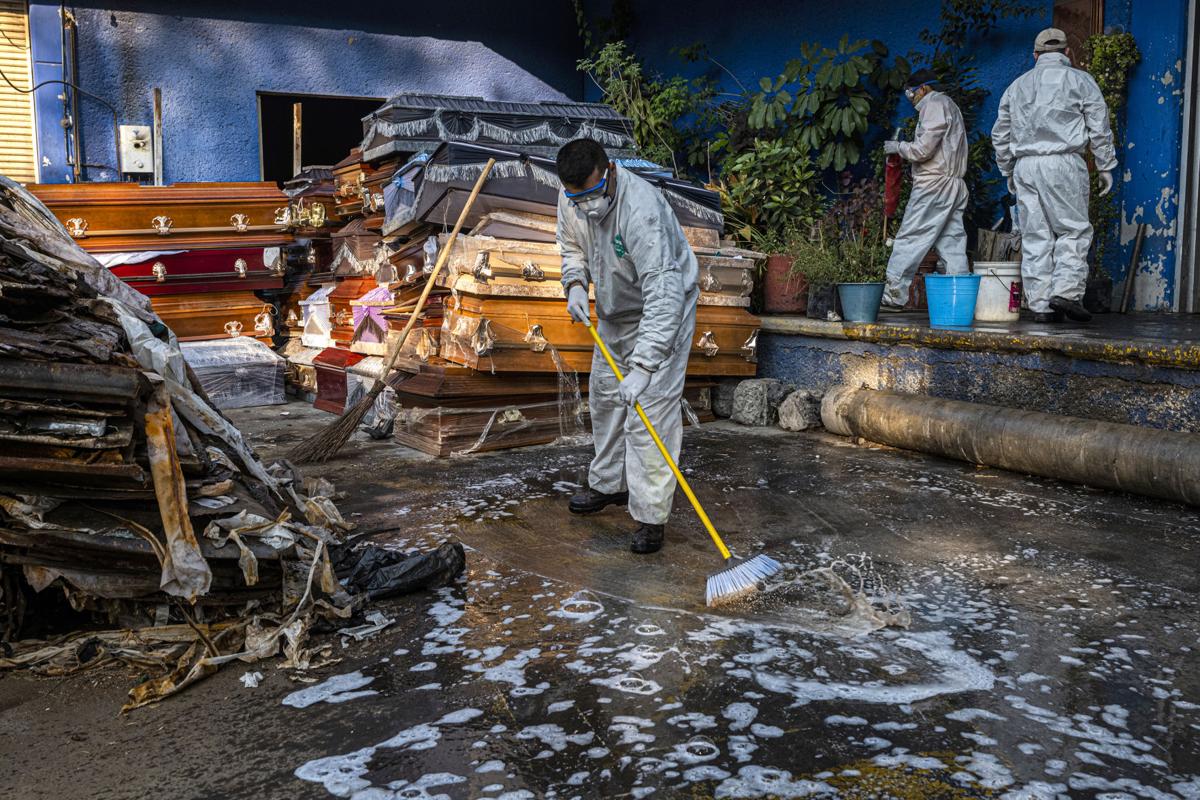 A sterilizing crew cleans the exterior of a crematorium at Xilotepec Cemetery in preparation for the arrival of a coronavirus victim in Mexico City on May 7. 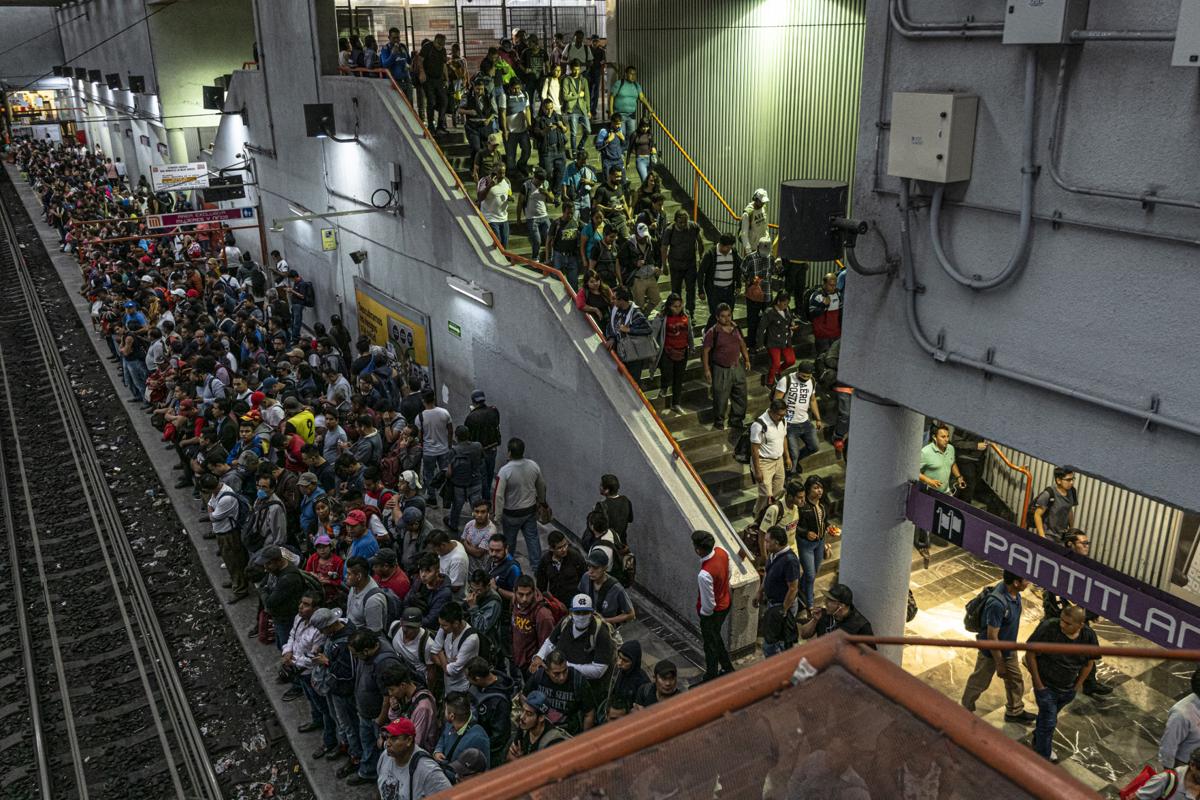 Commuters in a crowded subway station in Mexico City on April 3. The Mexican government is not reporting hundreds, possibly thousands, of deaths from the coronavirus in Mexico City, a New York Times report found.

Pat Noble with a volunteer at La Casa de Amor para Niños before the pandemic. She founded the organization with her husband in Palomas, Mexico, more than 20 years ago.

A sterilizing crew cleans the exterior of a crematorium at Xilotepec Cemetery in preparation for the arrival of a coronavirus victim in Mexico City on May 7.

Commuters in a crowded subway station in Mexico City on April 3. The Mexican government is not reporting hundreds, possibly thousands, of deaths from the coronavirus in Mexico City, a New York Times report found.

Recently I wrote about the failure of Mexico’s president, Andrés Manuel López Obrador, better known as AMLO, to take the coronavirus seriously and the even larger problem of a continuing lack of programs for the poor.

This has been confirmed by a May 8 front-page article in the New York Times. That article focused mainly on Mexico City and indicated that the federal government there had only reported about 700 deaths whereas officials in Mexico City had tabulated more than 2,500.

This dramatic under-reporting has led residents to believe that the coronavirus is not a serious threat and that “social distancing” is not important.

Juan Carlos, a Mexico City businessman adds, “AMLO is an irrational animal who has done everything wrong and is hiding the number of deaths. I have no idea how this is going to end. And then there will be the economic problem, which will be even more painful.”

Tito Jimenez, a friend from Oaxaca makes a similar report, saying that coronavirus deaths have been reclassified as pneumonia. How does he know? Because the number of reported pneumonia deaths this year is seven times higher than it has been in past years. Obviously, something is fishy.

How has this affected those U.S.-based organizations that do so much to provide aid along the border? Here is how they are reacting.

Missions Ministries has its headquarters in Colorado but has been heavily involved in the colonies on the west edge of Juárez since 1992, building houses and maintaining a medical clinic and two libraries.

Susy Pineda with the staff in Mexico reports, “While food, masks and gloves are needed, Missions Ministries is not able to take items across the border at this time.” She adds, “Even those who are sick are fearful of going to the hospital as there was a shortage of medical staff even before the pandemic.”

Adrian Walker, the executive director says, “Groups are not allowed to cross the border, only essential personnel.”

Jim and Pat Noble from Santa Fe, New Mexico, founded La Casa de Amor para Niños in Palomas more than 20 years ago. They visited Palomas the weekend of May 9-10 and were able to provide despensas for 75 families.

Pat Noble reports, “We bought flour, rice and beans in Mexico” and “took toilet paper, oil, sugar and candy from here. (The Mexican customs officials) did not stop us at all.

“They still have the Central Salud tent set up where they ask you who you are and where you are going. Ana said they sprayed with a Clorox solution on that day in April. They were supposed to spray two days but they had so many complaints that they only did it one day.”

Molly Molloy from New Mexico State University crossed on foot at Palomas on May 8 and said there was no spray or bleach and that “a young woman wearing a mask wrote down your name, phone number, asked if you had health insurance, your citizenship, quizzed you on whether you had any symptoms. Then she took your temperature with a little device aimed at your forehead. I had a mask on and it was all very friendly.”

As for Juárez, reporter Angela Kocherga says that she has gone through the process entering Juárez. “The sanitizing ‘modulo’ sprays a fine mist over you and it happens quickly as you walk through the ‘tunnel,’ which is hardly long enough to qualify as a tunnel. The ‘modulo’ looks like an inflatable plastic arch. I don’t know how effective (or unsafe) it is since it does not seem like enough disinfectant to do much.”

An independent journalist, Debbie Nathan, crossed into Juárez on May 2 to buy medications and “went through a 5-foot tunnel that sprayed me with some kind of mist, and also had my temperature taken by a Mexican official.” Coming back she asked a U.S. Border Patrol agent to help maintain six foot social distancing and says that he screamed at her and told her to get out of line and go back to Mexico.

The director of Siguiendo los Pasos de Jesús (Following the Footsteps of Jesus), Jane Fuller, reports that there are no masks and no social distancing in the area on the west edge of Juárez where her program has built about 500 homes.

In short, it is a very confused and rapidly changing situation. On May 5, the mayor of Juárez, Armando Cabada, announced that he had tested positive for coronavirus. Let’s hope that he is well and that this brings about a stronger commitment to safety.

As for those from the United States who are continuing to cross over to their programs, this is a mark of their commitment. I wish them well.

Morgan Smith writes frequently on border issues and can be reached at morgan-smith@comcast.net.