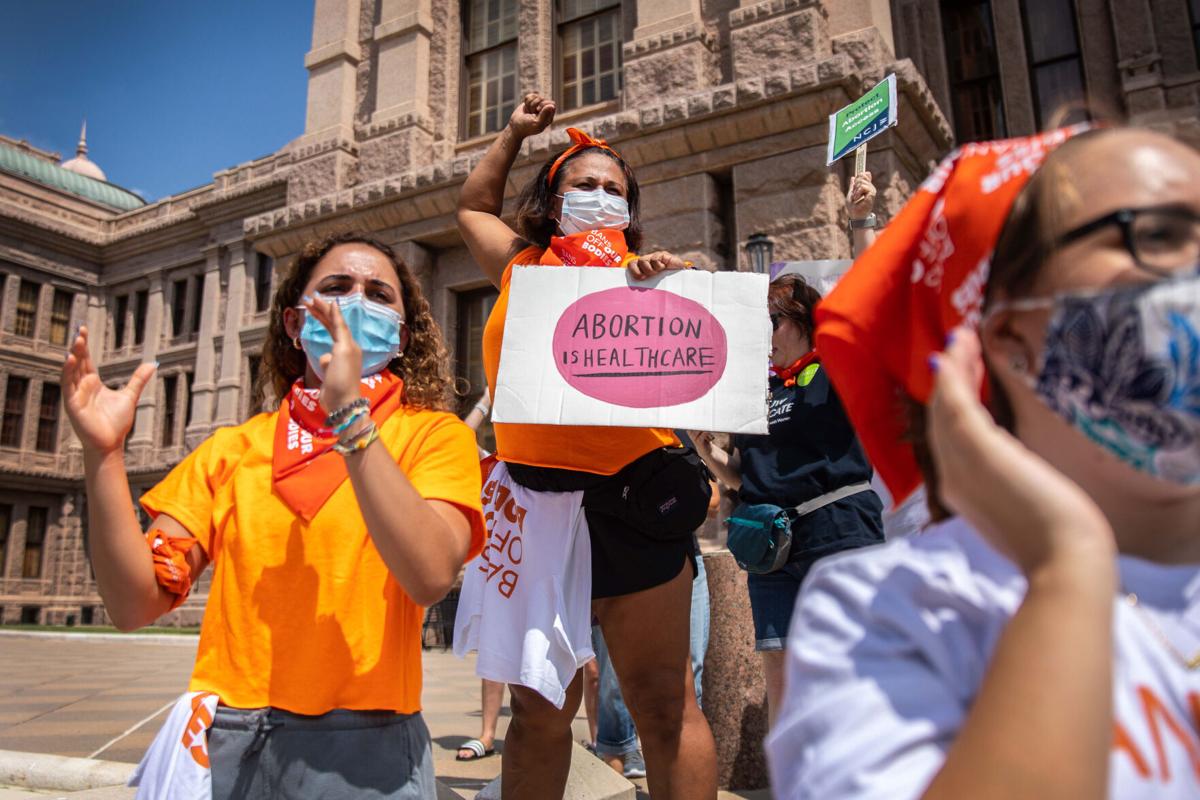 A “Bans Off Our Bodies” protest at the Texas State Capitol in Austin on Wednesday, Sept. 1. 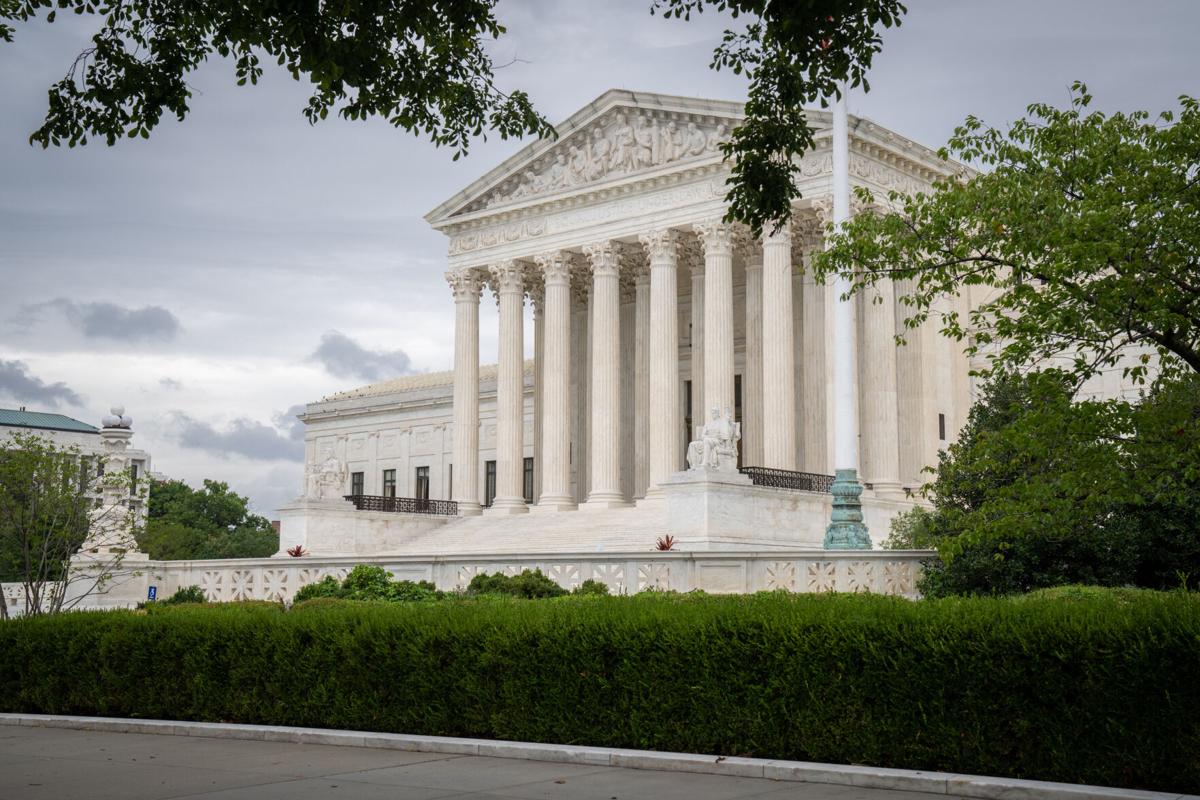 A Texas law prohibiting most abortions after about six weeks of pregnancy went into effect on Wednesday after the Supreme Court failed to act on a request to block it, ushering in the most restrictive abortion law in the nation and prompting clinics in the state to turn away women seeking the procedure.

The Supreme Court refused to block a Texas law prohibiting most abortions just before midnight Wednesday, less than a day after it took effect and became the most restrictive abortion measure in the nation.

The majority opinion was unsigned and consisted of a single long paragraph. It said the abortion providers who had challenged the law in an emergency application to the court had not made their case in the face of “complex and novel” procedural questions. The majority stressed that it was not ruling on the constitutionality of the Texas law and did not mean to limit “procedurally proper challenges” to it.

But the ruling was certain to fuel the hopes of abortion opponents and fears of abortion rights advocates as the court takes up a separate case in its new term this fall to decide whether Roe v. Wade, the landmark 1973 decision establishing a constitutional right to the procedure, should be overruled. It also left Texas abortion providers turning away patients as they scrambled to comply with the law, which prohibits abortions after roughly six weeks.

“The court’s order is stunning,” Justice Sonia Sotomayor wrote in her dissent. “Presented with an application to enjoin a flagrantly unconstitutional law engineered to prohibit women from exercising their constitutional rights and evade judicial scrutiny, a majority of justices have opted to bury their heads in the sand.”

“The court has rewarded the state’s effort to delay federal review of a plainly unconstitutional statute, enacted in disregard of the court’s precedents, through procedural entanglements of the state’s own creation,” Sotomayor wrote. “The court should not be so content to ignore its constitutional obligations to protect not only the rights of women, but also the sanctity of its precedents and of the rule of law.”

Roberts wrote that he would have blocked the law while appeals moved forward.

“The statutory scheme before the court is not only unusual, but unprecedented,” he wrote. “The legislature has imposed a prohibition on abortions after roughly six weeks, and then essentially delegated enforcement of that prohibition to the populace at large. The desired consequence appears to be to insulate the state from responsibility for implementing and enforcing the regulatory regime.”

The chief justice underscored the tentative nature of the majority’s ruling. “Although the court denies the applicants’ request for emergency relief today,” he wrote, “the court’s order is emphatic in making clear that it cannot be understood as sustaining the constitutionality of the law at issue.”

“Today’s ruling illustrates just how far the court’s ‘shadow-docket’ decisions may depart from the usual principles of appellate process,” she wrote. “That ruling, as everyone must agree, is of great consequence.”

“Yet the majority has acted without any guidance from the court of appeals — which is right now considering the same issues,” she wrote. “It has reviewed only the most cursory party submissions, and then only hastily. And it barely bothers to explain its conclusion — that a challenge to an obviously unconstitutional abortion regulation backed by a wholly unprecedented enforcement scheme is unlikely to prevail.”

“In all these ways,” Kagan wrote, “the majority’s decision is emblematic of too much of this court’s shadow-docket decision making — which every day becomes more unreasoned, inconsistent and impossible to defend.”

The Texas law, known as Senate Bill 8, amounts to a nearly complete ban on abortion in Texas because 85-90% of procedures in the state happen after the sixth week of pregnancy, according to lawyers for several clinics. On Tuesday night, clinics were scrambling to see patients until the minute the law went into effect, with six-hour waits for procedures in some places. By Wednesday, the patient lists had shrunk, clinic workers said.

The law is the latest battle over abortion rights in the United States. In recent years, anti-abortion campaigners have found success through laws in state legislatures, and a broad swath of the South and the Midwest now has limited access to abortions.

Texas has about 24 abortion clinics, down from roughly 40 before 2013, when the state Legislature imposed a previous round of restrictions. It was not immediately clear Wednesday if every one of them was complying with the law, which the Republican governor signed in May, but many said they were.

In the emergency application urging the justices to intervene, abortion providers in the state said the new law “would immediately and catastrophically reduce abortion access in Texas,” and most likely force “many abortion clinics ultimately to close.”

Supreme Court precedents prohibit states from banning abortion before fetal viability, the point at which fetuses can sustain life outside the womb, or about 22 to 24 weeks into a pregnancy. The law in Texas says doctors cannot perform abortions if a heartbeat is detected, activity that starts at around six weeks, before many women are even aware they are pregnant.

Many states have passed such bans, but the law in Texas is different. It was drafted to make it difficult to challenge in court.

Usually, a lawsuit seeking to block a law because it is unconstitutional would name state officials as defendants. However, the Texas law, which makes no exceptions for pregnancies resulting from incest or rape, bars state officials from enforcing it and instead deputizes private individuals to sue anyone who performs the procedure or “aids and abets” it.

The patient may not be sued, but doctors, staff members at clinics, counselors, people who help pay for the procedure, and even an Uber driver taking a patient to an abortion clinic are all potential defendants. Plaintiffs, who do not need to live in Texas, have any connection to the abortion or show any injury from it, are entitled to $10,000 and their legal fees recovered if they win. Prevailing defendants are not entitled to legal fees.

Dr. Jessica Rubino, a doctor at Austin Women’s Health Center, a small, independent clinic in the state capital, said that at first, she wanted to defy what appeared to be an unconstitutional law. But she said she concluded that doing so would put her staff at risk.

“If this was a criminal ban, we’d know what this is and what we can and cannot do,” Rubino said. “But this ban has civil implications. It requires a lawyer to go to court. It requires lawyers’ fees. And then $10,000 if we don’t win. What happens if everybody is sued, not just me?”

Doctors who are sued, even if the suit is dismissed, have to report the lawsuits when they renew licenses or obtain hospital admitting privileges, according to Amy Hagstrom Miller, the chief executive at Whole Woman’s Health, which operates four clinics in Texas.

There was little indication of the shifting legal ground outside the Planned Parenthood Center for Choice in Houston, the group’s only location in the city that provides abortion services. A blue bus offering free pregnancy tests from an anti-abortion group, a regular presence, sat across the street. But inside, the effect was clear: Dr. Bhavik Kumar, a staff physician, said he had seen six patients by Wednesday afternoon, down from his usual 30.

“It was absolutely organized chaos,” said Sadler, who had come from San Antonio to help out. “Patients were waiting upward of five and six hours to have their procedures done.”

The immediate question for the justices was not whether the Texas law is constitutional, but whether it may be challenged in federal court. The law’s defenders say that, given the way the law is structured, only Texas courts can rule on the matter and only in the context of suits against abortion providers for violating the law.

The Supreme Court’s ruling was provisional. The challenge to the law remains pending in the lower federal courts, and they are poised to sort through the complex issues in the case.

As the law came into force, Democrats assailed it and pledged to fight to retain abortion rights in Texas and nationwide. In a statement, President Joe Biden said the measure “blatantly violates” the constitutional right to abortion established by Roe v. Wade.