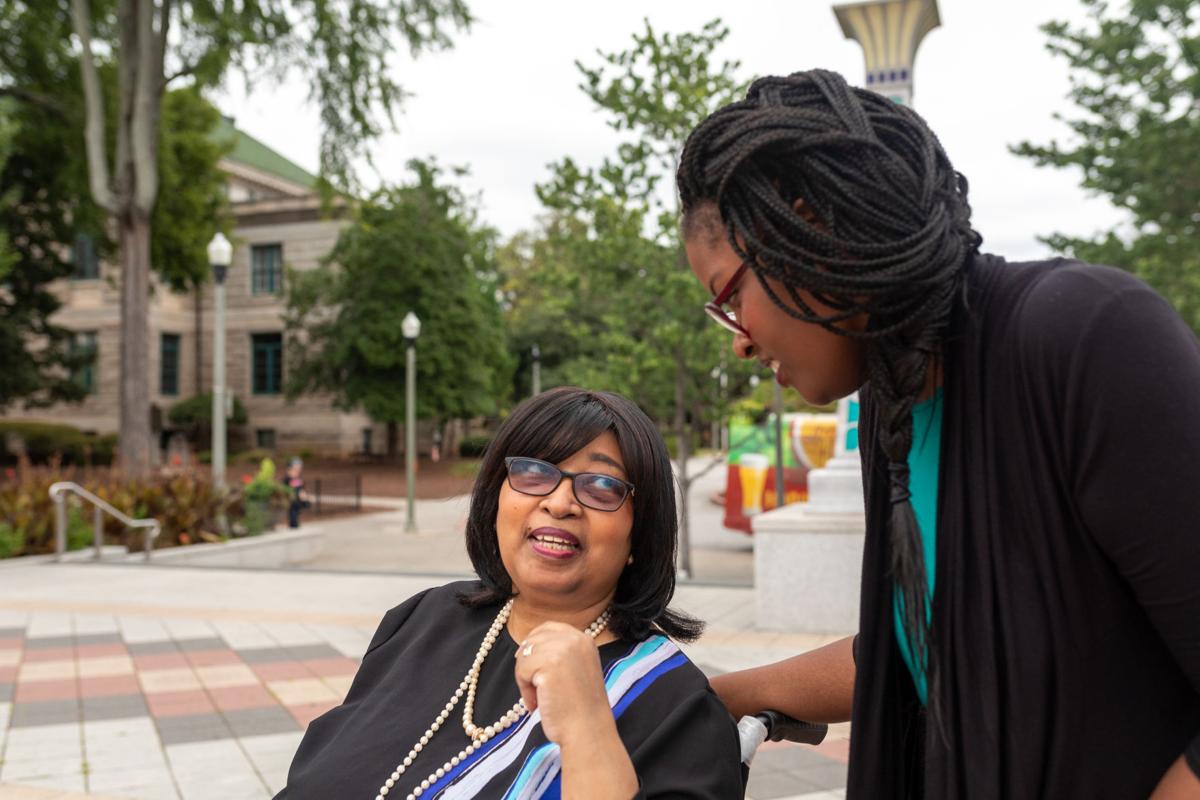 Aisha Adkins with her mother, Rose, whose dementia was diagnosed six years ago. 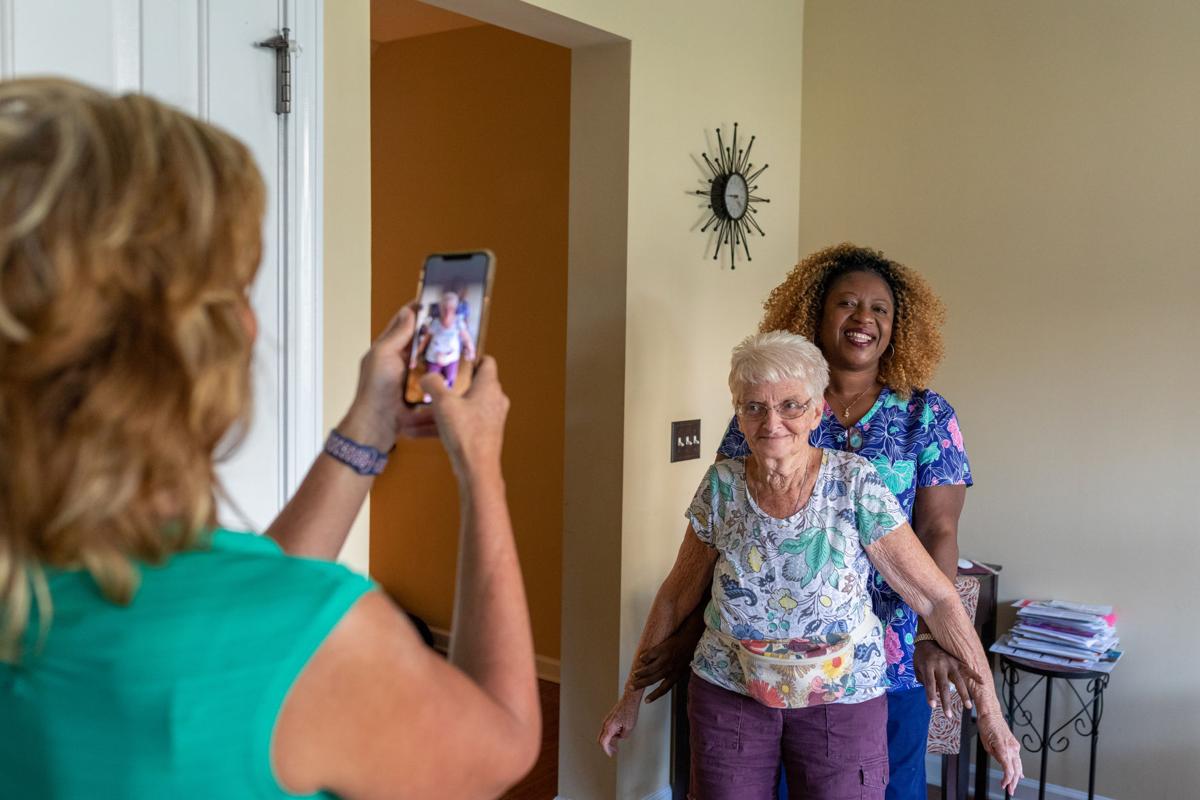 Heather Oglesby with her mother, Patricia, and a caregiver.

Aisha Adkins with her mother, Rose, whose dementia was diagnosed six years ago.

Heather Oglesby with her mother, Patricia, and a caregiver.

DUNWOODY, Ga. — Aisha Adkins would rather have her own place, instead of living with her parents. She would also like a job, a car, a master’s degree and savings. But at 35, a decade after graduating from Georgia Southern University in Statesboro with a specialty in social services, she has had to put off those goals.

Her mother, Rose, received a diagnosis of dementia six years ago, at 57, and cannot be left alone. Since then, Adkins has been consumed with her care. “I’ve gone on three dates in the last three or so years,” she said.

She ensures that the family’s home in an Atlanta suburb is stocked with her mother’s medications. She prepares her mother’s breakfast — peanut butter and jelly, with a glass of milk. She bathes her and dresses her and sits her in front of reruns of “The Young and the Restless.” She cooks her dinner: mainly chicken (with a vegetable and a starch), spaghetti or chili. She retires to her room around 10 — entrusting her mother to the television set and Ron, her father, by then home from work.

The burden of care for aging relatives is reshaping the lives of millions of others. About 15% of women and 13% of men 25 to 54 years old spend time caring for an older relative, according to the Labor Department. Among those 55 to 64, the share rises to 1 in 5 Americans. And 20% of these caregivers also have children at home.

What’s more, demand for care is growing. “The boomer generation is turning 70 at a rate of 10,000 per day and living years longer than when the safety net was originally built,” said Ai-jen Poo, a co-director of Caring Across Generations, a coalition of advocacy groups. Her organization is pushing to add a benefit to cover care — for older adults, children and sick family members — to the nation’s safety net, alongside Social Security and Medicare.

While men, too, are being forced to step up, Poo noted that “women in particular are bearing the brunt.” By knocking from the workforce many women who are in their prime earning years, the growing strain from care is weighing down the U.S. economy.

Among the 36 industrialized countries in the Organization for Economic Cooperation and Development, the United States ranked 17th in 2000 in the participation of prime-age women in the workforce. By 2017, it had slid to 30th. While the lack of family-friendly policies like parental leave and child care subsidies played a role — making it tougher for American women to juggle motherhood and work — economists say the virtual absence of support for eldercare is a prime suspect in explaining why the share of women taking part in the labor force stalled in the late 1990s after rising relentlessly for 50 years.

For many, of course, leaving the labor force is not an option. More than 60% of the people caring for an older person work, too — and 45% of the caregivers work full time. But altogether, U.S. families forgo at least $28.9 billion per year in wages when they take time off to take care of their children or sick relatives, according to a study issued in 2016 by the liberal Center for American Progress.

The burden of care has not become a political concern with the urgency of health care policy; it is mostly absent from proposals by candidates for the Democratic presidential nomination. But it is seeping into the conversation. Sen. Bernie Sanders’ “Medicare for All” proposal includes a benefit for long-term care. Sen. Elizabeth Warren supports universal child care, which she has proposed to finance with a wealth tax.

Poo argues that it is only a matter of time before care becomes a political priority. “There is no feasible way in this economy that people can manage care without more institutional support,” she said.

And the economic benefit would be substantial. A 2015 study by the Labor Department estimated that if prime-aged American women worked as much in the formal workforce as their counterparts in Canada or Germany — which have more generous policies to subsidize care for the young, the sick and the old — 5.5 million more women would have been in the labor force in 2014, increasing gross domestic product by 3.5%.

In 2004, California became the first state with a paid family-leave benefit. It offered six weeks of partly paid leave for workers with a newborn, a sick relative or other caring needs. One study concluded that the benefit significantly increased the share of mothers who returned to work one year after giving birth. Other studies have also found some evidence that paid leave increases the labor participation of mothers, particularly those in less-skilled jobs. Some researchers have found that paid leave can raise mothers’ wages over the long term, by preventing them from having to interrupt their careers to care for young children.

Half of Americans who reach 65 will need long-term care, typically for 2 years, according to government projections. The bill will be $266,000. A little more than half will come out of the pocket of the person receiving the care and the family. In the typical case, these people will spend their resources until they become indigent enough to qualify for Medicaid. Once they are poor, they can be covered: Medicaid pays over a third of the country’s long-term-care costs.

In June, the National Academy of Social Insurance published a report exploring ways in which care for the young, the old and the sick could be added to America’s social insurance package.

One option the academy considered would cover child-care expenses exceeding 7% of household income. It would cover part of the salary of people who took leave to care for a relative. And it would pay for about $36,500 worth of long-term care over a lifetime. This would not cover the entire tab faced by families, but it would go a long way toward easing their financial strain.

dkins and her father understand that her mother will need full-time professional care at some point. But they have no idea how they will pay for it. Glencare — a company that offers long-term-care insurance and services — estimates that a home health aide costs $4,195 a month. A private room in an assisted-living center would set them back $4,000. A semiprivate room in a nursing home might take $7,441.

The Adkinses’ situation may be extreme, stemming from a dementia diagnosis at an early age. But even for caregivers who keep a foothold in the labor force, the economic cost can be substantial.

Take Heather Oglesby, a project officer for the Centers for Disease Control and Prevention in Atlanta. She was 42 when her mother received a dementia diagnosis four years ago.

Oglesby managed to get her mother on Medicaid — a bureaucratic feat that required perseverance and skill — so she could afford a care worker. Her own job requires being in the office only one day a week.

Still, she said, care has stunted her career prospects and weighed on her marriage. She has taken money from her pension plan and refinanced her home to cover her mother’s expenses.

“Caregivers are physically and mentally and financially dying,” she told me. “They are a health care crisis in the making.”