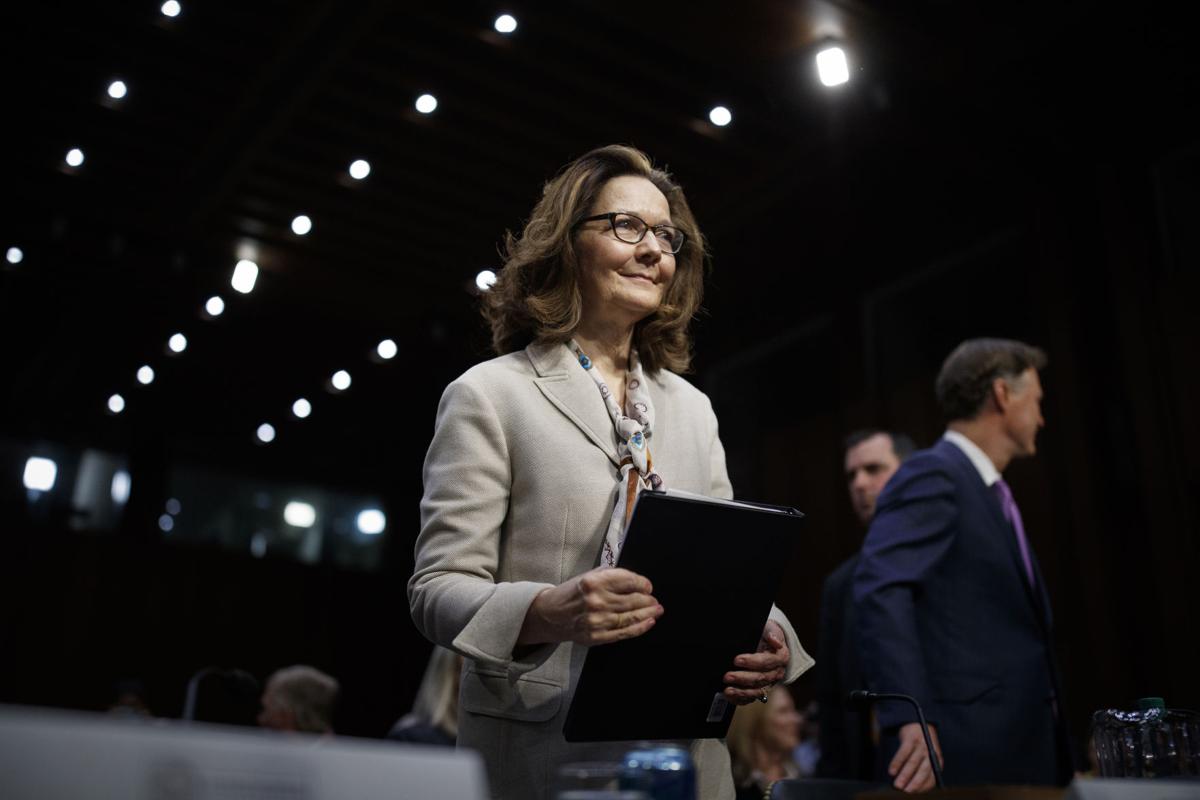 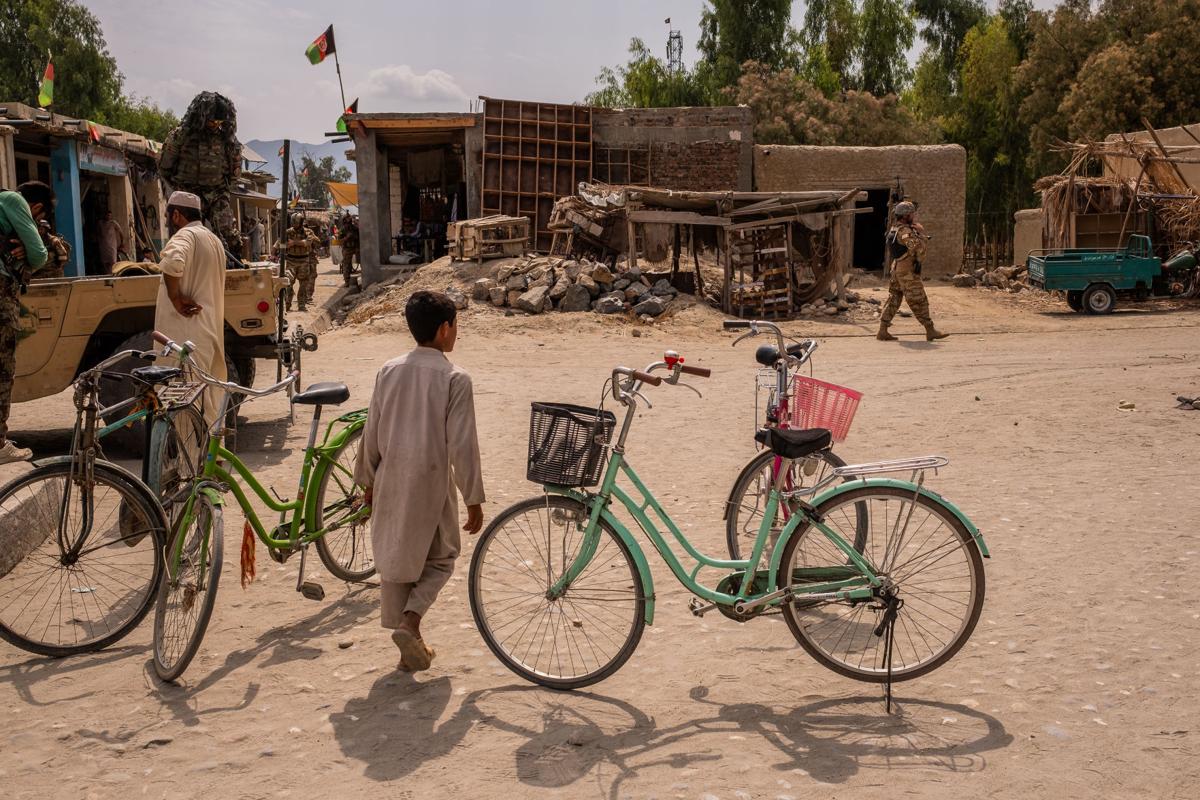 FILE -- A boy looks on as members of a CIA-sponsored strike force patrol in the Bati Kot district of Nangarhar, Afghanistan, July 24, 2018. White House advisers want to expand the CIA’s presence as troops leave Afghanistan, but the agency’s director and others expressed reservations. (Jim Huylebroek/The New York Times)

FILE -- A boy looks on as members of a CIA-sponsored strike force patrol in the Bati Kot district of Nangarhar, Afghanistan, July 24, 2018. White House advisers want to expand the CIA’s presence as troops leave Afghanistan, but the agency’s director and others expressed reservations. (Jim Huylebroek/The New York Times)

WASHINGTON — Senior White House advisers have proposed secretly expanding the CIA’s presence in Afghanistan if international forces begin to withdraw from the country, according to U.S. officials. But CIA and military officials have expressed reservations, prompting a debate in the administration that could complicate negotiations with the Taliban to end the war.

Some administration officials want CIA-backed militia forces in Afghanistan to serve as part of a counterterrorism force that would prevent the resurgence of the Islamic State or al-Qaida as U.S. military troops prepare to leave — in effect, an insurance policy.

But others are skeptical that the shadowy militias, many of which face accusations of brutality, can serve as a bulwark against terrorism without the support of the U.S. military.

CIA Director Gina Haspel has raised logistical concerns about the plan with other administration officials, emphasizing that the agency operatives — who marshal the militias to hunt Taliban, al-Qaida and Islamic State militants — largely depend on the military for airstrikes, overhead surveillance, medical support and bomb technicians.

Skeptics have also noted that U.S. intelligence agencies do not believe the Islamic State’s presence in Afghanistan justifies a vast increase in resources given limited budgets. The Islamic State’s affiliate there is not an immediate threat to the West, despite its regular attacks on Afghan civilians and continuing fight with the Taliban, according to intelligence officials.

The disagreement about the future of the CIA in Afghanistan underscores the fault lines within the administration between those who want a final withdrawal and those who fear it would expose the United States to terrorist threats. This article is based on interviews with a half-dozen current or former officials briefed on the administration’s discussions. The CIA declined to comment, and the White House declined to respond on the record to a request for comment.

The issue could pose an obstacle as U.S. and Taliban negotiators seek a deal to end the longest war in United States history. The Taliban have made clear that they see little difference between U.S. military troops and CIA officers, and they have insisted in the current peace talks in Qatar that the CIA must leave along with international military forces in the coming months or over the next few years.

The top U.S. negotiator, Zalmay Khalilzad, said over the weekend that the two sides were on “the threshold of an agreement” after the latest round of negotiations. They have broadly covered the fate of the Afghan security forces but have not dealt directly with the militia groups, or U.S. support for them, said a person familiar with the negotiations.

The Afghan government is not part of the negotiations, but the deal is expected to open a path for talks between the government and the Taliban.

Supporters of the plan to expand CIA support for the militias believe it could address the most potent critique of the peace talks: that a withdrawal of U.S. forces would leave the United States with little ability to prevent terrorist groups from once again using Afghanistan as a base of operations.

“The high-end forces, including CIA-supported forces, are not going to win any war for you, but they may degrade the capability of terrorist groups,” said Seth G. Jones, a scholar at the Center for Strategic and International Studies and a former adviser to the commanding general of U.S. Special Operations forces in Afghanistan.

But like other former officials, Jones said that ramping up the operations of the militias while drawing down the U.S. military would be impractical and ineffective.

A peace deal that pulls out U.S. forces but does not disarm the Taliban would give it control of larger parts of Afghanistan, effectively creating a haven for terrorist groups that no increase in CIA support to the militias could counter, Jones warned.

CIA-supported militias operate across Afghanistan and are used by the United States and the Afghan government to target terrorist and insurgent cells.

These militias have taken on increasingly dangerous missions in Afghanistan in the past year, seeking out hard-to-find and well-defended terrorist leaders, a former senior Defense Department official said.

They trace their roots to the immediate aftermath of the Sept. 11, 2001, attacks, when the CIA began assembling a patchwork alliance of warlord-led fighting groups to topple the Taliban and pursue al-Qaida fighters.

After the fall of the Taliban and the establishment of a new Afghan government, the CIA’s shadowy paramilitary arm, known as Ground Branch, began transforming the fighting groups. Some developed into large, well-trained and equipped militias that initially worked outside the auspices of the Afghan government. The militias were used for sensitive and covert missions, including pursuing terrorist leaders across the border into Pakistan’s lawless frontier territory.

In more recent years, the agency’s hold over militant groups and other regional counterterrorism forces and strike teams has waned some, former officials said. Many of the militias now fall under the command of Afghanistan’s own intelligence service, the National Directorate of Security. But there is little doubt they are still advised, and often directed, by the CIA.

The Taliban’s disdain for the CIA’s Afghan counterpart has been apparent in recent months. In July, a bomb targeting the Afghan covert service killed eight members and six civilians, and wounded hundreds more. In January, Taliban fighters infiltrated an Afghan intelligence base in Wardak province, killing dozens in one of the deadliest attacks on the service during the nearly 18-year war.

Fighting in Afghanistan has increased since peace discussions began as both sides try to strengthen their positions. Taliban fighters mounted two attacks over the weekend, including one in the northern city of Kunduz that killed the top police spokesman and wounded the police chief, according to local officials.

In a Fox News interview last week, President Donald Trump alluded to keeping U.S. forces, and perhaps the CIA, in Afghanistan after any deal with the Taliban is reached. “We are reducing that presence very substantially and we’re going to always have a presence and we’re going to have high intelligence,” he said.

Trump said that the troop level in the country would be reduced to 8,600, down from roughly 14,000. The military has pushed a plan to gradually draw down forces, but administration officials have fiercely debated the precise timeline.

The president has been vague about his preferred outcome on the current peace proposal or the plan to expand the CIA role, and Haspel has also withheld her opinion in meetings. Secretary of State Mike Pompeo has been driving the peace negotiations forward. John R. Bolton, the national security adviser, opposes the current peace deal, largely on worries about whether Afghanistan can keep terrorists at bay on its own.

Senior military leaders are divided. Some believe the peace talks are worth trying, but many remain worried that a troop drawdown that moves too quickly will lead to a collapse of the country.

Increasing the CIA’s role in Afghanistan as troop numbers decrease is not a new idea. In 2014, as the Obama administration considered withdrawing all U.S. troops from the country by 2016, policymakers weighed using the agency-sponsored militias as an Afghan counterterrorism force.

But the CIA-backed militias are deeply controversial within the wider Afghan population. Afghans have charged that they are responsible for attacks that left many civilians dead and use brutal tactics that have turned large swaths of Afghans against the forces. Last month, tribal elders said that a raid by the Afghan-intelligence-backed forces killed 11 civilians in Paktia province, prompting the Afghan government to begin investigating.

While the CIA’s precise footprint in Afghanistan is unclear, the agency invested more resources into the country at the start of the Trump administration in an effort to pursue Taliban fighters. Now, agency paramilitary officers — working often from an annex near the U.S. Embassy in Kabul — team up with militias and other small Afghan intelligence teams across the country to go after al-Qaida, the Islamic State, the Haqqani network and often various factions within the Taliban, current and former officials said.

For the CIA militias to serve as an effective counterterrorism force, those U.S. military teams would need to remain, even if only with a few dozen people, in different parts of the country, current and former officials said.

The exact size and nature of the agency’s presence in Afghanistan are closely guarded secrets, and details about the militia groups the CIA advises are also murky.

Even with continued military support, expanding the agency’s work would mean extending one of the deadliest missions in the agency’s history.

At least 20 CIA members have been killed in Afghanistan during the war, according to current and former officials. In July, an Army bomb disposal technician was severely wounded during a CIA-led mission, and an agency contractor was killed over Memorial Day weekend.