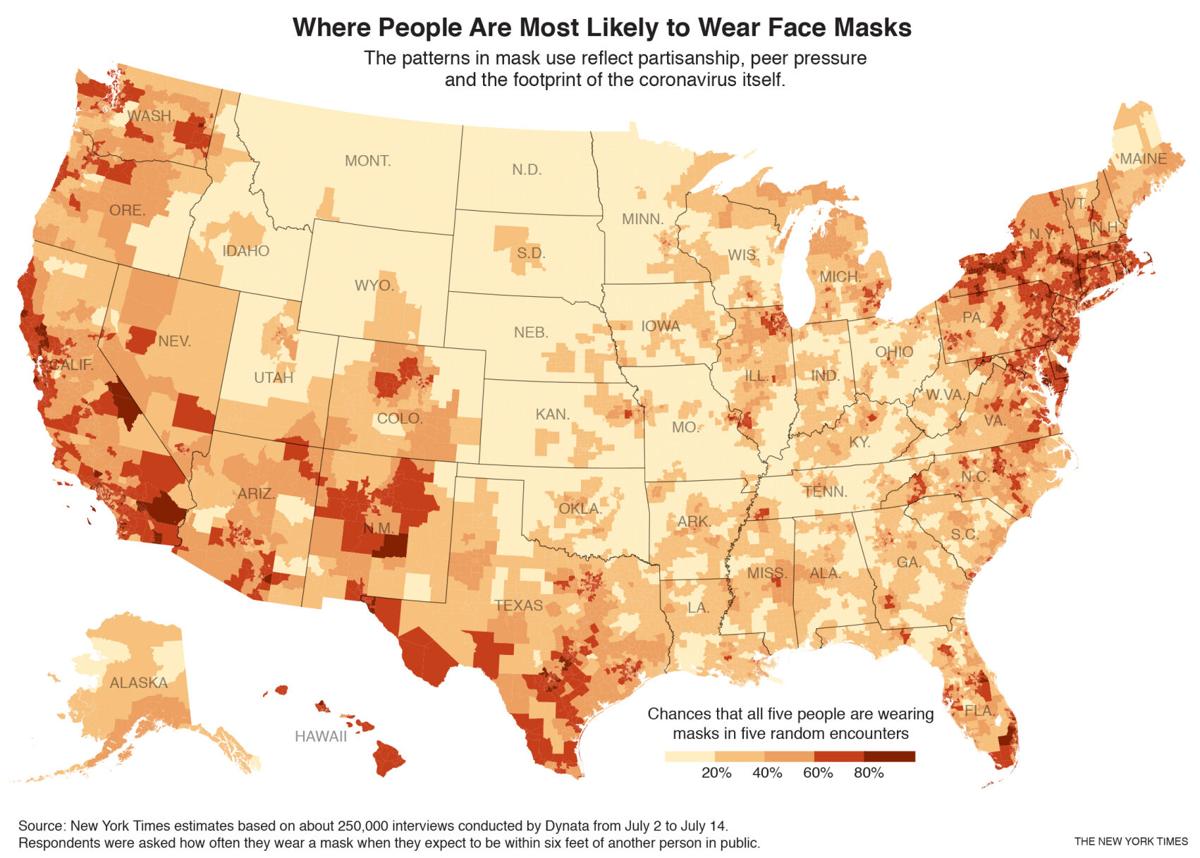 The patterns in mask use reflect partisanship, peer pressure and the footprint of the coronavirus itself. 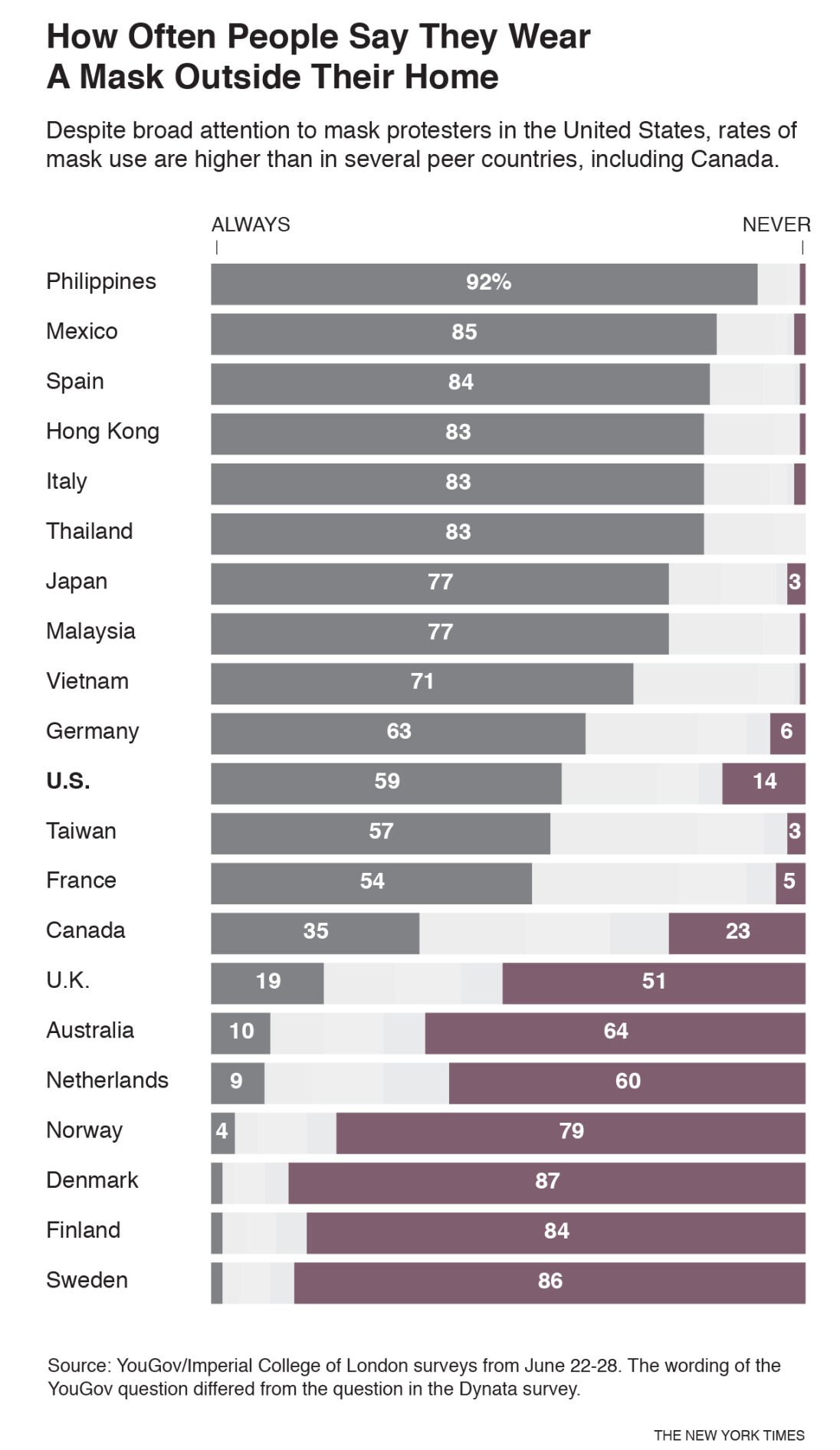 Despite broad attention to mask protesters in the United States, rates of mask use are higher than in several peer countries, including Canada.

In some American neighborhoods, it’s hard to spot even one person outside without a face covering. In others, your odds of seeing many maskless people are quite high.

Public health officials believe that face coverings can substantially slow transmission of the coronavirus, which is spreading rapidly in many states. But face coverings work best if they are adopted widely, and that is not the case everywhere. The accompanying map shows the odds of whether, if you encountered five people in a given area, all of them would be wearing masks.

Our data comes from a large number of interviews that global data and survey firm Dynata conducted at the request of The New York Times. The firm asked a question about mask use to obtain 250,000 survey responses between July 2 and July 14, enough data to provide estimates more detailed than the state level. (Several states have imposed new mask requirements since the completion of these interviews.)

There are broad regional patterns. Mask use is high in the Northeast and the West; lower in the Plains and parts of the South. But it also shows many fine-grained local differences. Masks are widely worn in the District of Columbia, but there are sections of the suburbs in both Maryland and Virginia where norms seem to be different. In St. Louis and its western suburbs, mask use seems to be high. But across the Missouri River, it falls.

Gov. Brian Kemp of Georgia recently barred local governments in the state from requiring mask use, but on Friday he urged residents to wear them anyway.

In many parts of Georgia, seeing unmasked people is common, but mask use is very high around the city of Albany, where there was an early and intense outbreak of coronavirus.

These variations reflect differences in disease risk and politics, but they also may reflect some local idiosyncrasies. Elizabeth Dorrance Hall, an assistant professor of communications at Michigan State University, said mask behavior can be subject to a kind of peer pressure: If most everyone is wearing one, reluctant people may go along. If few people are, that can influence behavior, too. Such dynamics can shape the behavior of friends, neighbors and communities.

“We definitely take our cues from our friends, and we often, almost always, already share values with our friends,” Dorrance Hall said. “It takes a strong person to stand up and say: This is what we’re doing and we’re all doing it.”

El Paso Mask Use Among Highest

Despite these variations, and despite the flare-ups over the issue that pepper social media, the rates of self-reported mask use in the United States are high. Several national surveys in recent weeks have found that around 80% of Americans say they wear masks frequently or always when they expect to be within 6 feet of other people. That number falls short of the sort of universal masking many public health officials have asked for, but it is higher than the rates of mask use in several other countries, including Canada, Finland and Denmark, according to a recent survey from YouGov.

“We can never expect 100% risk reduction,” said Julia Marcus, an epidemiologist and assistant professor at Harvard Medical School who has studied HIV prevention. “It’s not realistic.”

Still, some countries are clearly getting closer to universal mask use than the United States, suggesting there is room for improvement.

Compliance on all those other public health measures has risen through a combination of laws and public health advocacy. The evidence for laws on masks is limited, but it seems to support their effectiveness. A study of Mexican taxi and bus drivers during the H1N1 flu outbreak in 2009 showed that stronger rules increased compliance. A recent study in Health Affairs that looked at U.S. states found that state mask requirements appeared to have reduced virus transmission, though the researchers did not measure mask use directly.

Other public health campaigns also show that mandates may work. Laws are credited with increasing the use of seat belts and the vaccination rates among school-age children. Laws have been shown to be among the most effective ways to decrease indoor smoking, a behavior that, like declining to use a mask, can increase health risks to people nearby.

But public health and communications researchers emphasize that persuasion matters, too. Messages that make people feel empowered and address the downsides of masks are likely to be more effective than those that emphasize guilt or shame, Marcus said.

El Paso, Texas, Mayor Dee Margo, a Republican, has made limiting the spread of coronavirus a public policy priority, and for several weeks has been requiring mask use when indoors. When he makes public appearances, he wears a mask promoting Vanderbilt University, where he attended college on a football scholarship, and he emphasizes the importance of face coverings.

“We’re a pretty caring community, and I think people are starting to understand that wearing a face covering means you care about your community, your fellow man, and those around you,” said Margo, who said he sees people wearing masks even while they are working out at the gym. “It’s important to do, and you’re not a wimp if you do it.”

El Paso is among the communities where, according to our data, you are least likely to encounter maskless people.

Mask Use Is Often Partisan

From the moment President Donald Trump announced recommendations from the Centers for Disease Control and Prevention to wear a face covering, he made clear that he did not personally like the idea. Early on, he made negative comments about masks and criticized people who wore them, and he has routinely refused to don one himself, even in places where mask use is required (though he did allow himself to be photographed in a mask for the first time last week, when he visited Walter Reed National Military Medical Center). He is not alone among Republican officials in eschewing masks or downplaying their benefits, behavior that political scientists believe has encouraged a partisan split in who wears masks.

Mask wearing is common among Americans of both political parties, but there is a 20-point split in many surveys, with Republicans substantially less likely to say they wear masks often or always and much more likely to say they never wear a face covering.

You might think the divide can be explained by where people live. In general, Republicans are more likely to live in states with less population density, and in places that have had laxer rules about masks and lower rates of coronavirus infections, at least early in the pandemic. But research from a team that includes Shana Gadarian, an associate professor of political science at Syracuse University, has found that your political party is a better predictor of mask use than any other factor they measured. Her team compared people of the same age and living in the same ZIP code, and found partisan differences in mask behavior.

“The big takeaway of all of the data is partisanship is the big determinant of all of the behavior,” she said. “It’s not age. It’s not where you live.”

The behavior tracks other measures of the relationship between partisan identity and views about the coronavirus. A team of political science researchers tracked people’s concern about the dangerousness of the virus and their number of daily activities since the virus’s arrival in the U.S. Those researchers found that partisanship, more than any other factor, explained who was worried about COVID-19, and how many social activities they engaged in. Between March and early June, when the study ended, that partisan divide only widened.

But that doesn’t mean that politics is the only factor that matters. There is low mask use in several rural parts of the country with very few coronavirus cases. The survey question asked people about their mask use when they expected to be close to other people. The combination of those factors and party identification, may help explain why use of masks is low in places like North Dakota and Montana.

Mask Use Is Related to COVID Risk

Places that have experienced a lot of coronavirus, with a few exceptions, show higher-than-usual rates of masking. The Northeast is a Democratic-leaning area, but also a place struck hard by early waves of infection. Southern Florida and southern Texas, which tend to be more red, are suffering bad outbreaks and are now showing widespread mask use, too.

Political science research on anxiety has shown that some typical partisan differences tend to go away when people are most afraid. In parts of the country without a lot of cases, there are still wide variations in mask use that appear to be driven more by local custom and partisan identification than by specific disease risk. If coronavirus cases end up climbing in those areas, too, masks may start appearing on many more faces.