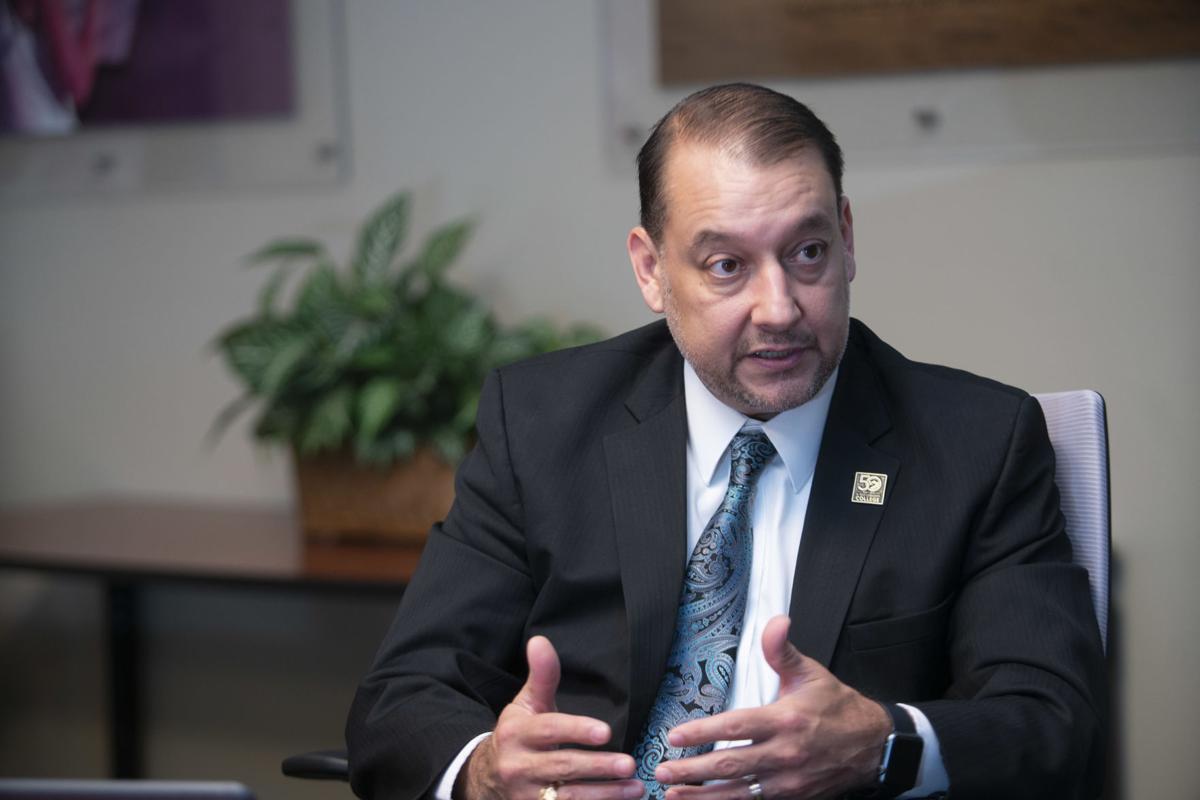 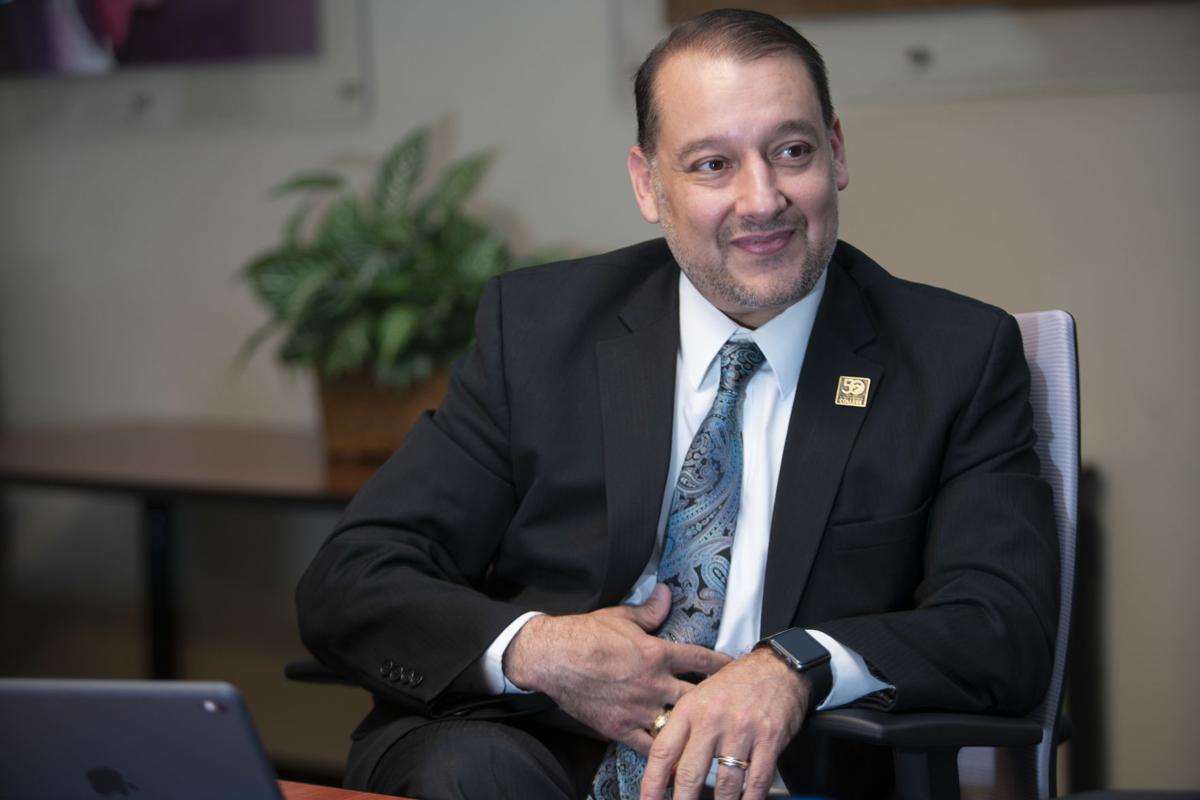 El Paso Community College President William Serrata has spent the last seven years overseeing the college during a time of growth for both the borderland and the institution, including doubling the number of early college high schools in the county.

The early college high schools are one piece of a broader effort to increase the number of young people in El Paso who earn a college degree. Fifty-eight percent of area high school graduates go to college, less than the national average of 72%, Serrata said. Fewer graduate with a degree.

El Paso Community College and other area schools and universities are working with nonprofits and the business community to change that.

Serrata, who is originally from Brownsville, said he’s happy both professionally and personally to be in El Paso as EPCC continues to grow.

There are improvements and additions going on at each of EPCC’s five campuses, and future plans to build a sixth location at Fort Bliss. Serrata said some of the additions include more space and equipment to offer more career technical education courses.

“We take the tagline very seriously: We’re celebrating the past, but we’re literally and figuratively building the future,” Serrata said.

EPCC is celebrating its 50th anniversary. The community college was established in 1969 by former Texas Sen. Joe Christie, who authored legislation to establish EPCC.

Like many of the students at EPCC, Serrata was the first in his family to attend college. He graduated from Texas A&M in 1993, earned a master’s from the University of Texas at Brownsville in 1999, and a doctorate in educational human resource development from Texas A&M in 2009. He came to El Paso from South Texas College in McAllen to become president of EPCC in 2012.

Serrata sat down with El Paso Inc. and talked about free college, what’s on the horizon and Tex-Mex.

Q: What’s the status of the Fort Bliss campus?

We signed a 50-year lease with Fort Bliss and the Department of Defense, with a renewable 50-year option. When we were looking at the master plan for the institution, the issue was really, at that time, the cost prohibition of starting a brand new campus. Phase 1 of Fort Bliss is about $40 million.

We’re committed to Fort Bliss. It will be our sixth campus. We’re just looking at the timing of it and when we can afford to do it, and if we choose to ask the community to help us with this.

We’ve been around for 50 years. In those 50 years, we’ve passed one bond, back in 1974, for about $19 million. We’re not a school district; we’re not going to do anything in the neighborhood of what we’ve seen the districts do – from $400 million to $700 million. The college would look at something probably no more than the $150 million range.

It would help us establish Fort Bliss and would add some of the facilities we need to the five existing campuses. It’s on the table. I’d imagine if we go forward, it’ll be in the 2021 time frame.

Q: Will the Fort Bliss campus be focused on any field or specialty?

When we did the master plan, we communicated with leadership and the staff at Fort Bliss who told us the kinds of programming they need. We’re looking at IT, cybersecurity and criminal justice. Many soldiers leaving active duty look at criminal justice.

The health care programs are always of interest. The new campus would be next to the new William Beaumont Army Medical Center. When we spoke to that colonel, he was really looking at nursing programs. We currently have the licensed vocational nurse program at the Mission and Rio Grande campuses, but we could easily move that into Fort Bliss.

We’re about 88% academic transfer programs. There’s nothing wrong with students going off and earning baccalaureate degrees. But from my experience, we should be at least 30% career technical education.

Part of that is that we didn’t have the space, the equipment in particular. When we were doing the new master plan, the board and I focused on that. This will get us more in line.

One of the first career technical education projects we’re opening is the transportation training center. We’ll have 22 bays that can look at diesel mechanics, auto body repair, logistics, hydraulics – really nice programs that are high-wage, high-skill.

Q: There are now 12 early college high schools in El Paso County. What’s the status of that initiative?

The rigor and quality are profound, and it’s because we provide the support. We have a good blueprint of partnerships with the districts, the college and UTEP. We’re excited about where we are.

When I got here about 15% of our enrollment was dual credit. This past fall it was 27%. That’s what you’re seeing across the state. It’s the fastest growing area of higher education, period.

Q: How do you feel about competing with for-profit institutions like Vista College and Southwest University?

They have a specific mission. For me, the competition isn’t any other institution of higher education. The competition is procrastination and apathy. We just don’t see enough students going to college and being successful.

What I will say is we offer many of the same career programs. It takes a similar amount of time to get through. We have many certificate programs that are a year or less. Our associate of applied sciences degrees are two years or less.

We didn’t have the facilities for some of them. Western Tech, for example, does a great job of getting students in those particular programs.

The transportation training center will be one of the facilities that will really offer students the opportunity to do those programs with us. The board’s vision is to offer all of those at the most affordable cost that we can to the students.

We’re by far the best value for higher education in this region. Tuition and fees is $1,500.

Q: What are the challenges for EPCC in the next five years?

This was a wonderful legislative session. This session had a real focus on public education, tax reform and tax relief.

Creating that college-going culture continues to be a challenge. We do it better in our region. Fifty-eight percent of our high school graduates go to college. But we’re still behind the national average of 72%.

Q: How has EPCC’s student population changed over the years? Are you seeing more students interested in a particular field?

There is always high demand for the nursing and health field. What we’re seeing now is also cybersecurity and STEM areas as well. We’re moving forward with those by adding facilities like the STEAM (science, technology, engineering, art and math) building at the Valle Verde campus.

Q: What are the trends in community colleges across Texas and across the U.S.?

Dual-credit and early college high schools are certainly some of the trends. We’ve also seen a movement toward community colleges offering baccalaureate degrees. Currently, it isn’t right for us. We have great relationships with UTEP and Texas Tech.

I think we’re also seeing the tie between education and workforce, and I think that will continue. I think students see it more relevant now. It’s more concrete to them and their families, particularly as the cost of education rises.

Q: Do many EPCC students take out loans?

We do offer loans but do not pre-package our loans. When students want to get a loan, we have counseling they can go through.

Right now, full tuition and fees is $1,500. About 87% of our first-time college students are on some type of aid, of which 97% is Pell Grants or scholarships.

There are not a lot of reasons for students to be looking at those loans. Right now, full Pell is just under $3,200 per semester. You still have half of your Pell for books and extras. We manage about $10 million in loans annually and disperse about $60 million in Pell annually.

Q: One of the ideas making the rounds during this presidential election cycle is that college should be free. Should it?

El Paso was one of the areas selected to participate in former President Barack Obama’s American graduation initiatives to try and get the U.S. back to being first in the world. He also had a bold idea of having community college free.

Nothing’s free; we as taxpayers end up paying for that. But it is a very good investment. His plan was “first-dollar,” meaning the government should pay for that first dollar, despite you being on financial aid.

I believe there’s an opportunity for “last-dollar,” meaning if you’re on financial aid or scholarships or anything, we’ll help you with whatever’s left. I think that’s a much wiser plan and also makes sure students have skin in the game and will take it seriously.

We have leadership here in El Paso, folks like CREEED, that are exploring this. We’ve been in communication with them and have helped them crunch numbers and look at different models that could be replicated in El Paso.

The data’s overwhelming, that if you have an increase in the educational attainment level in a region, the increase in the quality of life follows. It’s something I know leaders in our community are looking at, and we’re very much supporting that.

Q: Are you enjoying living in El Paso?

El Paso embraced us from the beginning. We’re very fortunate. I was born and raised in Brownsville; I lived in McAllen for 16 years before coming to El Paso.

I love the community. The people and culture to me are very significant. I always tease that the climate is different – thank God – and the food’s different. People say I’m used to Tex-Mex and I say, “Wait a minute. It’s influenced by a different state of Mexico.” Here we have Chihuahua, and down there it’s Tamaulipas.

Tex-Mex is just influenced by a different region. I also point out that I haven’t lost any weight, so the food’s just fine.