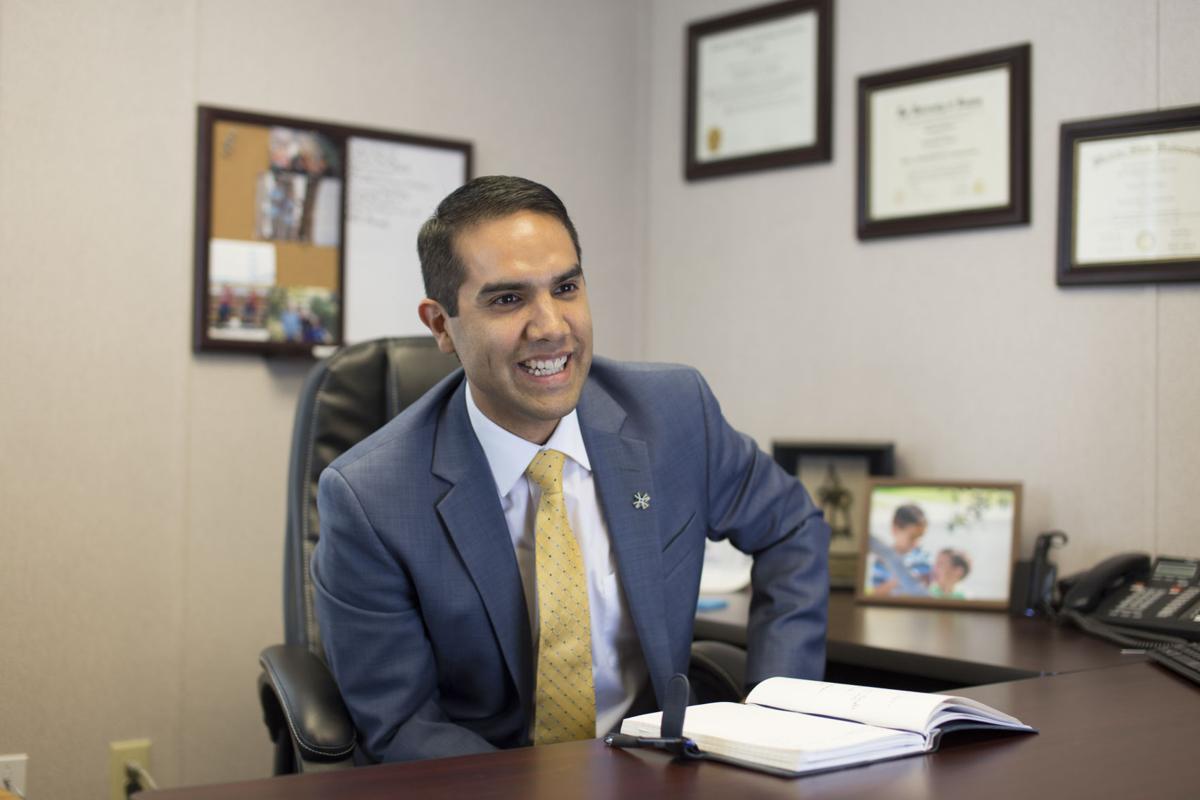 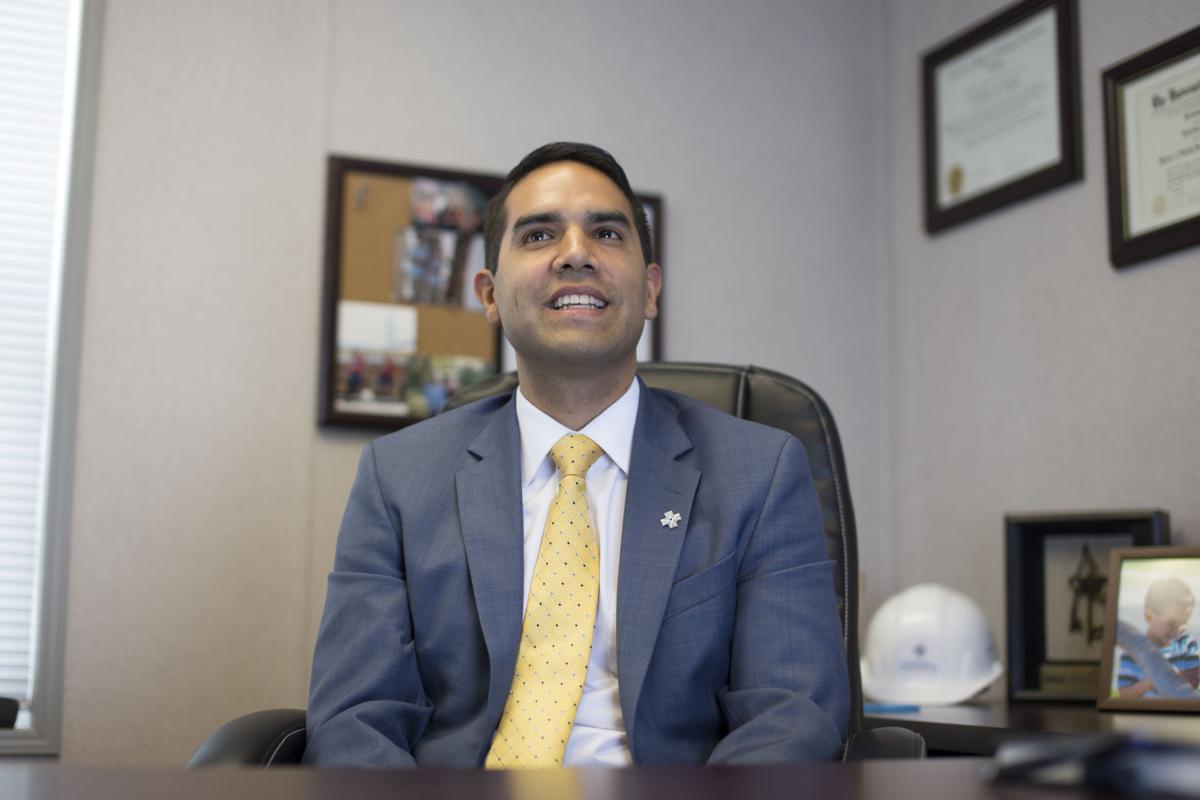 Nicholas Tejeda is overseeing the development of Tenet Healthcare Corp.’s first-ever teaching hospital in one of the for-profit hospital giant’s most important markets.

At 37, Tejeda is also the youngest hospital CEO in El Paso. He’s a rarity in an industry where C-suite executives tend to be older than they are in other industries, like the tech world.

Tejeda came to El Paso about a year ago to head the Hospitals of Providence East Campus, where he was CEO for 10 months. He was suddenly tapped for the top job at the Northwest Campus after Hank Hernandez left the position. Hernandez had been on the job less than a year.

The $200-million hospital, now under construction in Northwest El Paso, is expected to open next January. The project is a partnership between Tenet and Texas Tech University Health Sciences Center El Paso.

The 300,000-square-foot hospital will have 108 beds with the capacity to expand to 140 beds. Next to the hospital, a medical office building is under construction, and there is room on the property for another tower and office building.

Tejeda, who goes by Nico, grew up in Wichita, Kansas, the youngest of five kids. His dad was a pharmacist, and Tejeda began working for the family business when he was in high school.

“I called myself the director of product disbursement, which meant delivery boy,” Tejeda said. “I remember when there would be snow days and people wouldn’t have to go to school. My dad would knock on my door at 5 in the morning and say it is time to go to work.”

Tejeda has a master’s degree in health services administration from University of Kansas Medical Center and a bachelor’s degree in business management from Wichita State University.

He got his first job as a hospital CEO when he was 32. Before coming to El Paso, Tejeda was the CEO at Doctors Hospital of Manteca in California.

He was recently named one of the top 10 minority health care executives to watch by Modern Healthcare magazine.

Tejeda recently got a drone for his birthday. He says it has a practical purpose: taking video of the hospital, which he has used to recruit doctors.

El Paso Inc. got to see Tejeda and his drone in action. After the interview, he led a quick tour of the new hospital and sent the drone up to get some aerial footage. You can see his handiwork, along with our photos, on page 14A.

In his office, located for now in a construction trailer, Tejeda talked about the unique challenges of building a teaching hospital, the development springing up around it, and the interrogation that led to his career in health care.

Q: What makes this hospital a teaching hospital?

When we open, we are going to start off with medical students. By 2020, we will begin our residency rotations. Residents are doctors who have completed medical school, but they need that additional level of training.

There are classrooms in the hospital specifically designed to train physicians in the didactic and practical, and that is unique.

I can’t pick up a newspaper or magazine in El Paso without reading about growth – some new development. The city is growing, and as the community grows, we have to grow with it.

One of the limiting factors, of course, is the availability of physicians. How do we solve that problem? We analyzed it and realized one of the best things we could do is help train physicians. Studies show that where they train, they remain.

Q: How many physicians will you be able to train at the hospital?

When we have our residency program at full speed, we anticipate having anywhere from 75 to 90 residents. The core rotations for those residencies are going to be in six areas: internal medicine, family medicine, OB/GYN, pediatrics, general surgery and psychiatry.

Q: Why those areas?

Those are the ones most in need by the community.

Q: What is Texas Tech’s role?

The Hospitals of Providence fully owns and operates the hospital. That’s the same. It’s what Texas Tech provides that makes it unique. They have the faculty, they have the research and they have the curriculum. They bring a lot to the table.

We have an academic affiliation agreement that delineates this, but I’ll make it very simple. What we do well is run hospitals; what they do exceedingly well is prepare physicians to serve the community. That’s where we can blend the two together.

Q: Why build the hospital in Northwest?

Northwest El Paso will grow by 5 percent over the next five years. We see a huge opportunity to serve that population and also southern New Mexico.

Q: What development is happening around the hospital?

It’s remarkably similar to what happened at the East Campus.

Have you seen the aerial photographs? It’s amazing how it has changed. That is what you are going to see here. I have a drone now, and I have taken some of my own footage…

Q: You have a drone?

It’s so much fun. If you look around us there is nothing, but the ground we are sitting on right now, 30 acres, has already been purchased by a developer based in Dallas. It’s going to be mixed-use. It’s going to have retail and restaurants – a hotel.

Q: When was it purchased?

I’m not sure when Hunt Companies closed the deal. That project is already happening, plus I have had a number of discussions with developers and physicians very interested in acquiring and building on the land adjacent to the hospital.

My family and I have been here a year and everyone tells me we got here at a very unique time in El Paso because of all of the development going on. It’s incredible.

Q: Do you expect this to look very different five or 10 years from now?

I expect this to look very different in two or three years.

Most of our physicians live within five minutes of this hospital, so I think you may see an even faster development cycle here than the East Campus.

Q: How many people will the hospital employ?

When we open, we anticipate having at least 300 employees – median income of $45,000. In terms of physicians, we expect a strong demand from our community physicians to practice here. The number of physicians who could practice here ranges from 100 to 200, if you look at our other hospitals.

Q: You had to jump into the middle of this project rather suddenly. Were you surprised to get the call?

To take a quick step back, since 2005, my wife and I have gone from Kansas City, to Sacramento, to San Francisco, to Reno, to San Luis Obispo, to Manteca.

There we were in Manteca, California, and Eric Evans and Sally Hurt called me about the opportunity in El Paso. We had never been here, but we came out and liked the area and said let’s go. That was last July. The first time we ever bought a home was here.

Q: I bet you get asked that a lot.

When I was in Manteca, I was talking to a physician. We’re talking, and another physician comes up, interrupts, and asks, “What year of medical school are you in?”

At my previous hospital, my assistant and I used to have a bet on how many seconds it would take for the person I am meeting for the first time to ask me about my youth.

Q: How did you rise so quickly through the ranks?

You have to work hard and you have to deliver on your promises, but a lot of people do that. We’ve been lucky to have the opportunity.

Q: How do you manage a project like this?

The other portion of my day is working with Texas Tech and my staff here to work through all the nuance of what it means to be a teaching hospital.

Q: Talking with physicians to recruit?

You have physicians who are already here in town who are very curious about this hospital. They would like to practice here, but perhaps they aren’t familiar with what it means to be a teaching hospital. In addition, we also spend a lot of time trying to recruit physicians from outside to come here.

We are going to try to solve that problem. I can’t overstate that. That is what makes this hospital unique.

Q: El Paso has been medically underserved for years. Now clinics, urgent care centers and stand-alone emergency rooms are popping up all around the city. What changed?

I don’t think the reason is very different from the reason why you are seeing investment across El Paso in all industries. People see, finally, that El Paso is a place to be.

It goes back over 100 years. Providence has had a long history here. It’s one of the reasons I came here.

I was in California and could have gone to a number of different markets, but this is one of the most, if not the most important, collection of hospitals in the company.

If you look at other markets for any company in the U.S., very few have as complex of investments as Tenet has here. Essentially you have the entire spectrum.

You have a health plan, hospitals, freestanding emergency departments, urgent care clinics, imaging centers and teen centers. That is very rare to find in a community this size.

Q: What is the greatest challenge operating a hospital these days?

The increasing complexity you have from government mandates and consumer expectations.

The Affordable Care Act has fundamentally changed the dynamics of health care. More people have access, which is wonderful. Yet, we have to meet that demand, which creates an operational challenge.

In addition, you have a changing health insurance industry that has increasingly placed a cost burden on the consumer with higher co-pays and deductibles. With that, consumers have become more cost conscious.

That has created an elevated need for the health care industry to have better service – as any industry should.

You cannot assume because a patient comes to a hospital that they are going to come back a second time.

Q: How did you get into health care administration?

When I was in college I worked as a registration clerk at a hospital, simply because I could type fast and understood health insurance. I just needed a job. I didn’t know how the hospital worked and didn’t even really care.

But one day, somebody stole something out of the safe where patients’ valuables were kept. The only people who had access were registration clerks. The CEO was so upset he called in every registration clerk, one by one, to interrogate them.

I was excited. It was the first time I had met a CEO of anything. It just so happened that we had similar backgrounds.

By the end of that hour, he said, “Young man, whenever you are done with school and you need a job, look me up.”

That is how I found hospital administration.