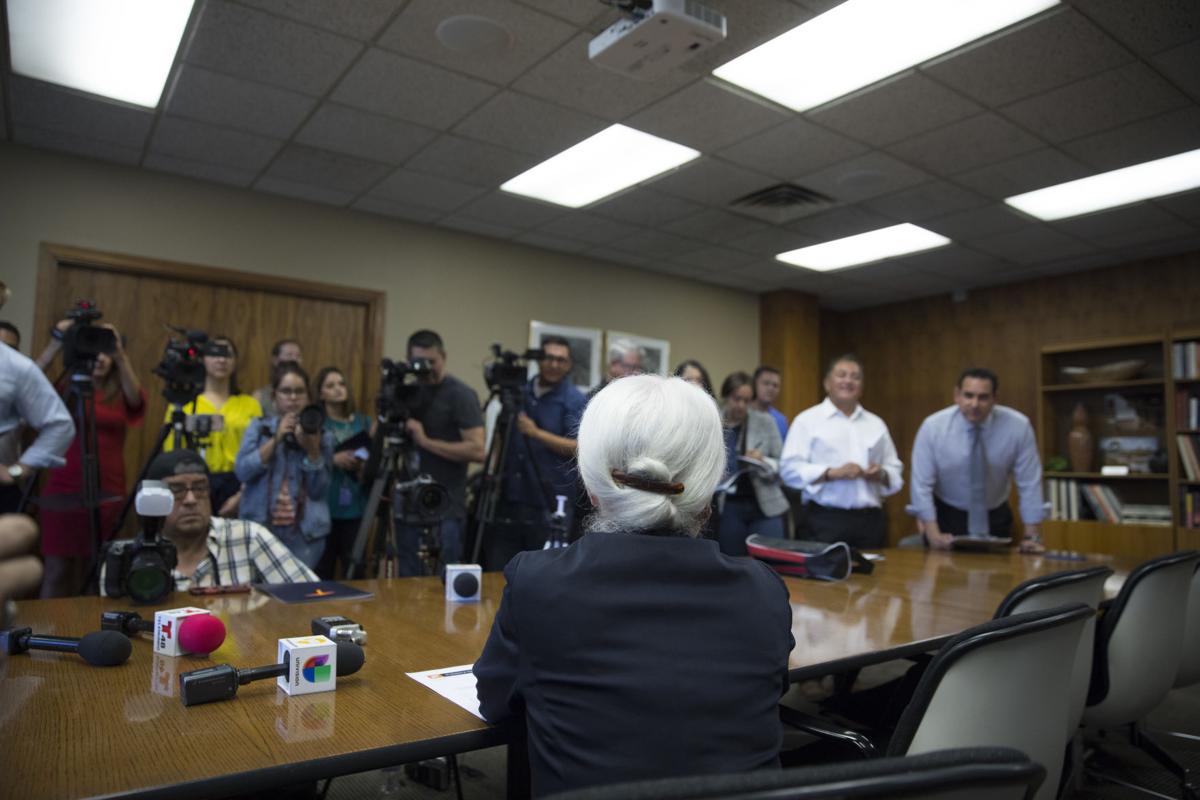 Natalicio addresses reporters at a news conference Tuesday announcing her plan to retire. 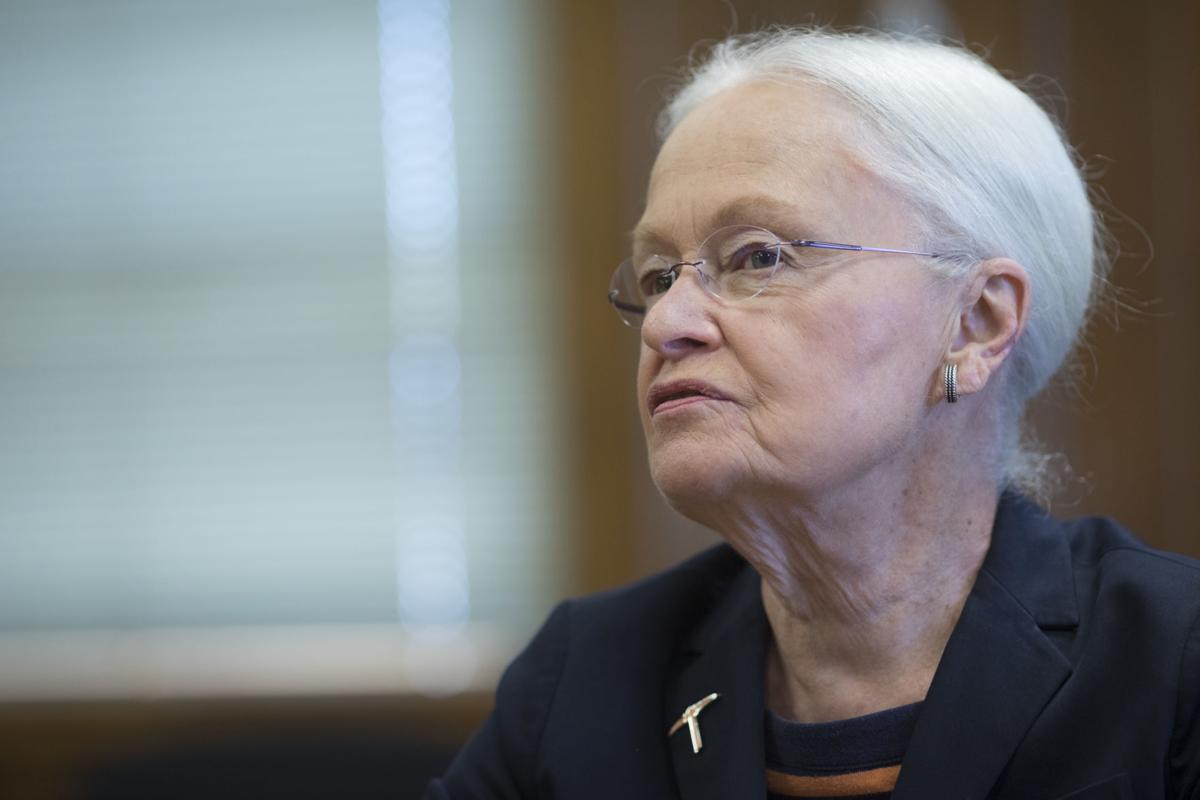 Natalicio addresses reporters at a news conference Tuesday announcing her plan to retire.

It was March 1997 and Dr. Diana Natalicio was ten years into her tenure as president of the University of Texas at El Paso when she was asked why she had stayed on as president for a decade.

“Tolerance for pain,” Natalicio jokingly told El Paso Inc. But she followed up by revealing a deep love for El Paso and the students she’s served year after year.

“I think that I’m very well matched to this institution in a lot of ways,” she said. “My life was a cake-walk compared to what many of our students face every day, but I was the first in my family to go to college. I really love these students. I love what this university represents for them, and that passion will drive you a long way.”

That commitment drove Natalicio through 20 more years at the helm of the university, where she oversaw the transformation of the campus and student body. Now she plans to retire once the University of Texas system finds a replacement.

Natalicio, 78, says she’ll remain in El Paso, which she calls home. She told El Paso Inc. she loves to travel and has trips planned to Slovenia and Croatia. She also wants to do some writing.

But she’s not ready to talk about her legacy.

“I am not ready to do that,” Natalicio said at a news conference on Tuesday. “I am not going anywhere today. This is just, as I put it, an early alert to people so that they can get prepared, but I am not going to think about my legacy right now.

Her career path was unusual. While one often moves up by moving around in academia, Natalicio stayed at UTEP, rising from her temporary position in 1971 to president in 1988.

After graduating from high school in St. Louis, Missouri, where she grew up, Natalicio worked as a switchboard operator.

“Within a month, I was so bored and so scared at what my life was going to be like … I ended up going to university,” Natalicio said, talking to the Rotary Club of El Paso on Thursday

She worked her way through college.

“I could work half-time as a secretary and pay my way through school. Today, students can’t do that,” Natalicio said.

She went on to earn a master’s degree in Portuguese and a doctorate in linguistics from the University of Texas at Austin. She then went to Brazil as a Fulbright student.

She arrived at UTEP as a visiting professor of linguistics in 1971 and was appointed UTEP’s president in 1988.

The following are excerpts of Natalicio’s remarks on Tuesday as she announced her plans to retire and answered reporters questions. She talked about being the first in her family to go to college, what’s next for the university and what she is most proud of.

Q: Any particular reasons, personally, why you are choosing to retire now?

Everybody has to retire sometime, right? I have stayed in this job for 30 years, which is a really long tenure for a university president. In fact, I think I’ve been told that I was the longest-serving president of a public university in the country. It is an unusually long tenure, and I think that at this point, we’ve accomplished a great deal.

Q: What is your idea of the ideal candidate?

Well, I don’t really think it’s my place to say exactly what kind of candidate it ought to be, but I do think there needs to be a commitment to access, which is creating opportunities for people who wouldn’t otherwise have it. That is extraordinarily important in public higher education because all the data show that low-income students don’t have access to higher education anymore. That’s because the cost has gone up and because everyone is focused on excellence and things like four-year graduation rates and SAT scores and things like that.

Q: Can you talk a little bit about your own past with higher education and how that informed your approach as an educator and administrator?

I went to a public high school that really was not up to college-readiness. They prepared us – they prepared the boys – to be apprentices in the various trade unions – electricians, carpenters and so on. They assumed that the girls would marry them, and so they prepared the girls for short-term careers or until their nuptials came along after secretarial studies.

Q: Throughout your time at UTEP, what were some of the changes that you saw in education and the workforce?

The second thing is the rising cost of higher education, which is very worrisome, particularly in public higher education. Public education has grown, and for a long time, it was a real generator of opportunities for young people from modest backgrounds.

It’s now becoming inaccessible because of rising costs, and that’s because states that used to invest a great deal in public higher education are investing less and less. With greater enrollment and fewer dollars, that’s a problem.

Q: When you look back at your 45 years here, what are you going to take pride in when you sit and look back?

Several years ago, a reporter for the Prospector asked me how many hands I had shaken at graduation, and that was a totally disarming question. I loved the question. Part of it is because people don’t ask in that way.

So we did some research and discovered that it was in the neighborhood at that time of maybe – this was eight years ago – something like 25,000 or something like that, which really seems astonishing to me, but that’s, I think, probably the biggest satisfaction.

Q: Looking at the actual campus physically compared to when you got here in the ‘70s, you see cranes out there. You’ve got a beautiful Centennial Plaza – all the changes. Can you talk about that?

Well, I think physical space is really important. We had an actual intersection right down here between University and Hawthorne. I was reminded of this when rain poured down yesterday. That area used to flood because the water would just rush down from the mountain and come around Old Main.

As the campus grew, there was a safety issue. We really had to do something about that, but it took far longer than I would have expected because we had to deal with the vehicle issue, and we had to build parking garages.

You don’t do aesthetic things very often, because you don’t have the resources. But celebrating a 100th birthday you can do something, so we did Centennial Plaza. That’s a very inviting space for people. I think physical space, being surrounded by beautiful things or by attractive space, makes us all behave better.

Q: How do you see whoever assumes your position continuing the efforts that you’ve made in trying to attract students from Juárez and Chihuahua, Mexico?

We are a Texas public university, and so first and foremost, we’ve really focused on ensuring that talented young people in El Paso – their talent isn’t squandered. We’ve always had students enrolled from Juárez but not in large numbers. We went up to about 1,800 maybe 12 years ago, and then, with some of the issues that arose in this region, that number dwindled. Now there are probably 1,100 or so Mexican students enrolled, about half of whom come on a daily basis and others who’ve moved over here.

Q: Where do you see the university going at this point?

Well, I see us growing in size. We’ve grown to 25,000-plus students, and that’s been very healthy growth. The reason that growth is important is that more El Pasoans are getting an education. That’s what we want. We’re going to continue to grow at a fairly steady pace.

Q: Is there anything you wish you could have done differently in your time as president?

Natalicio is retiring: What’s next?

The University of Texas System will have a deep pool of candidates as it searches for the next UTEP president, and the person who emerges will…

The UT System Board of Regents is expected to meet Friday to select the next president of the University of Texas at El Paso.