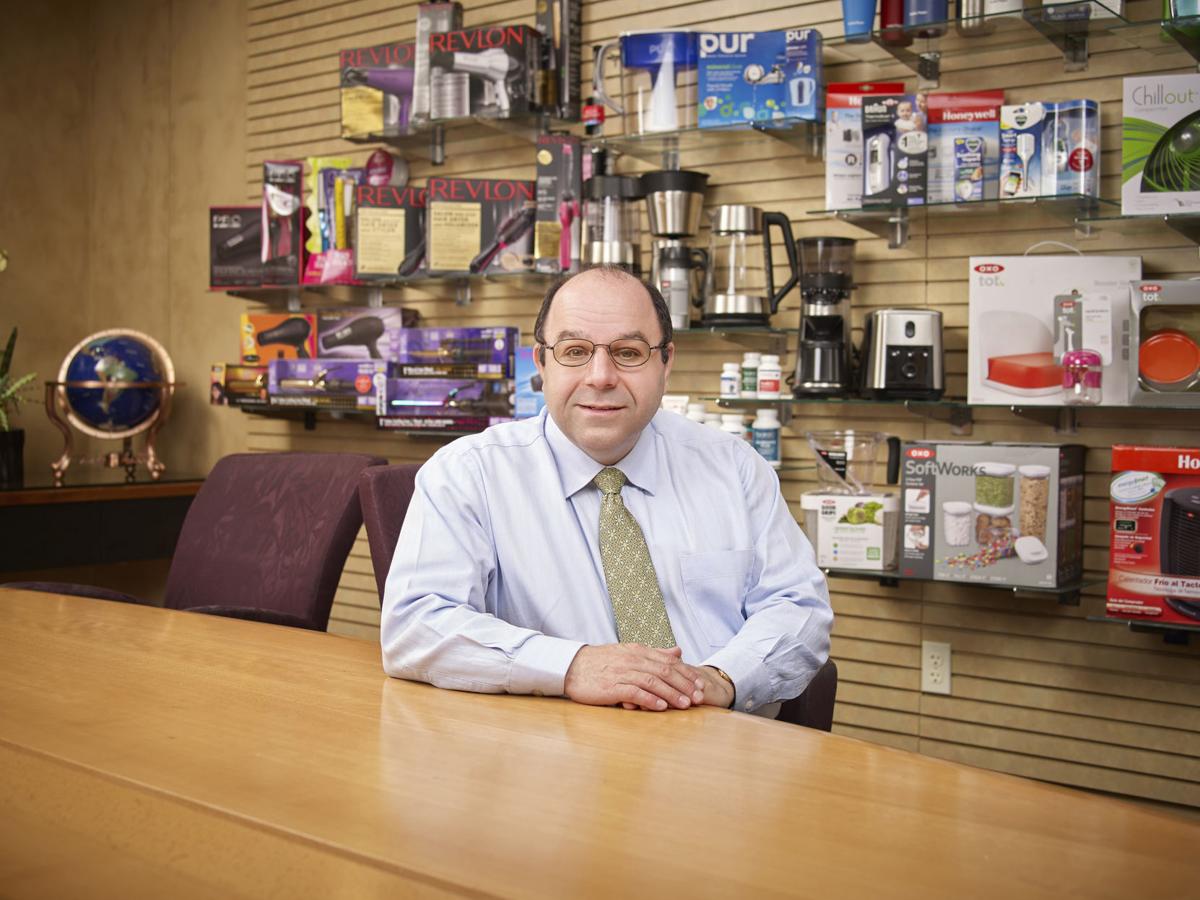 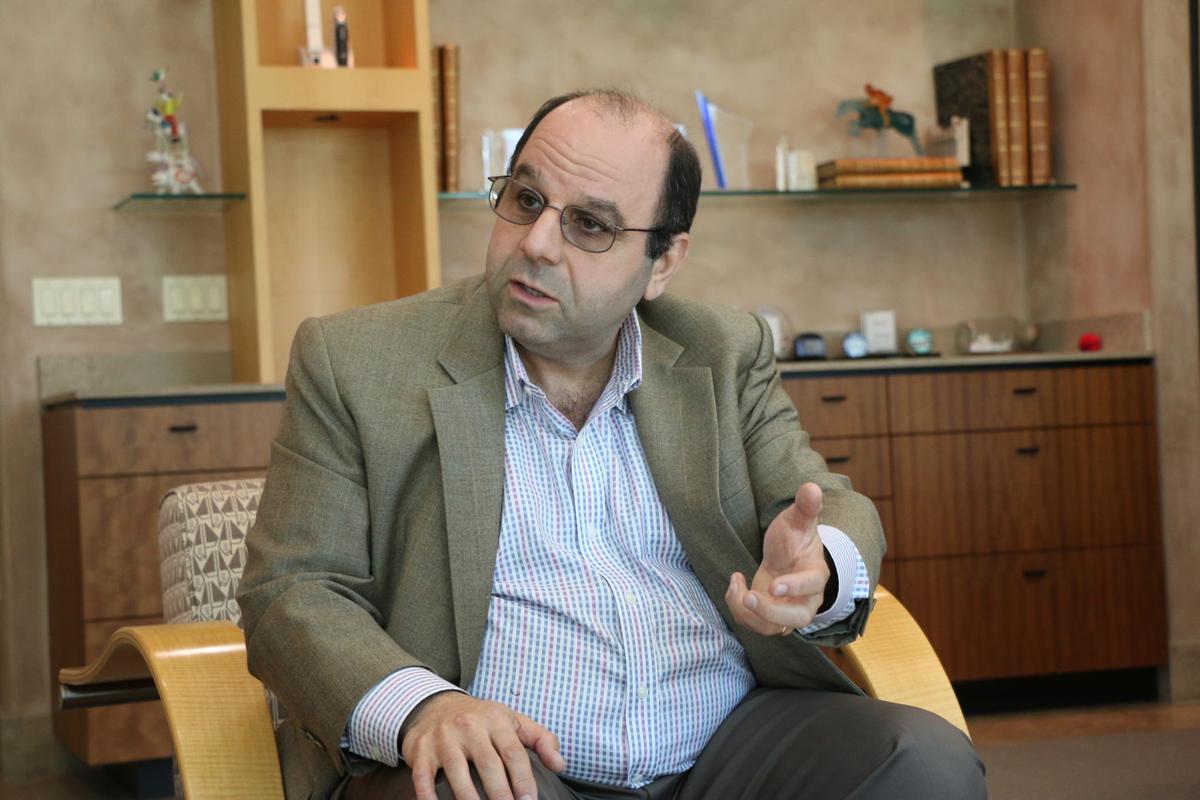 When Julien Mininberg was named CEO of consumer products giant Helen of Troy, the company’s leadership was in turmoil.

The board had ousted former CEO Gerald Rubin, who founded the company in El Paso in 1968 and grew it into a $1.3-billion enterprise. It was a messy breakup that spilled into the courts.

The conflict, which revolved around Rubin’s pay and leadership, also embroiled shareholders who overwhelmingly voted against Rubin’s $42 million pay deal in a non-binding “say-on-pay” vote – a rare investor revolt.

During it all, Mininberg was head of Helen of Troy’s largest business segment, health care/home environment, which had over $600 million in sales.

Helen of Troy (NASDAQ: HELE), one of only four publicly traded companies headquartered in El Paso, is better known by its brands, which include OXO, Revlon, Vicks, PUR, Dr. Scholl’s and Bed Head. The company had sales of almost $1.6 billion last year.

Mininberg, who lives in Boston, was named CEO on March 1, 2014. Less than three months later, he launched a transformation plan that included a major reorganization of the company’s leadership.

Shareholders have responded positively, and the company’s stock has risen 40 percent since Mininberg took the reins, closing Friday at $92.07 a share.

Mininberg, 51, was born and raised in New York City.

“I enjoyed being a kid in New York,” Mininberg says. “It was the 1970s and 1980s, so a different time from now. New York was a little bit rougher as a town than it is today.”

Mininberg went to college convinced he was headed to medical school; his father was a surgeon. But when he got to Yale University, Mininberg says he quickly discovered there were a lot of things in the course catalogue that interested him.

He ended up studying economics and art. After graduation, he worked at an investment bank for two years – long enough to know he didn’t want to be a banker.

He went back to Yale and got a master’s degree. He worked for Procter and Gamble Co. for 15 years, eventually overseeing the company’s business in Central America as country manager.

Mininberg grew up surrounded by art. His father was interested in ancient art and was a volunteer at the Metropolitan Museum of Art in New York. Mininberg’s mother has worked as a tour guide in the ancient Egyptian department for almost 50 years.

Mininberg is a woodworker. He also likes to draw when he can find time to, which these days isn’t as often as he would like, he admits.

Mininberg sat down with El Paso Inc. in the company’s headquarters at 1 Helen of Troy Plaza and talked about his transformation plan, why the headquarters remains in El Paso and what he has done to woo shareholders.

Helen of Troy was not a turnaround. This is not a broken company. In fact, it is a very strong company with a long and impressive heritage.

But to get to the next level, Helen of Troy needed nothing short of a transformation. We started that journey about 90 days after I started – a new strategic plan, major cultural changes and new capabilities the company did not have before.

It has made a huge difference in the results. We’re up 17 percent in sales over the two years and almost 40 percent on our earnings.

Q: What is the new strategy?

At the core is transformation, and it has seven basic planks. The idea of a global strategy at Helen of Troy is new since I became CEO. The company had no global leadership team, something that is common in many companies.

The strategy was approved by the board, and I went to every corner of the company, around the world, to implement it.

Q: What are a few examples?

The first plank is investing in our core. We have market-leading brands in the vast majority of the categories we play in, but we weren’t investing in them sufficiently to grow those positions.

Mergers and acquisitions have always been a part of Helen of Troy’s strategy; the company was built that way. What is new is to have very specific success criteria and a strategy to build the company in the shape we want to.

The third one is consumer-centric innovation. This is a huge shift in the beauty business.

For shareholders, we weren’t particularly active with shareholders in the past, and now we are. We’ve attracted new analysts. There were two and now there are five.

So we are little less of a best kept secret.

Q: I don’t think there are many CEOs that would disagree with investing in the core business and focusing on the consumer. What are some examples of how you are achieving that?

In our beauty business, we have been investing in core brands like Revlon that have been starved for either marketing investment or new product development investment.

As a result, we have turned it on its head, and there are major new products coming out of beauty. For example, the No. 1 new hairdryer in the country for the last six months is a Helen of Troy product. It’s now the No. 7 hairdryer in the whole country among any of them.

It’s not the only one. Our pro-beauty business has gone from roughly zero to north of $10 million in the last 15 months. We redid the line, redid the packaging, repositioned the product and sold it to two of the biggest customers in the country.

Q: The beauty segment, much of which is in El Paso, has been struggling. Sales were down 17 percent year over year in the most recent quarter.

For the last seven years, the beauty business has been on a declining trend. Last year, for the first time, it was flat. Of that 17 percent, part of the decline was due to hyperinflation in Venezuela.

Q: You mentioned cultural change. What was wrong with the culture, and what’s different now?

There were quite a lot of silos and a few kingdoms and fiefdoms that had to come down. They were changed substantially – maybe that’s an understatement. We now have a set of values and principles that apply across the company.

Q: Looking forward, what is your plan for growing the company?

We want to increase our organic growth rate, which was very anemic – below the level of GDP.

By investing in our brands. For example, sadly the lead found in the water in Flint, Michigan, is now widely known not to be limited to Flint. PUR is one of the very few products – the faucet mount – that can remove 99.9 percent of lead, and the business is growing.

Q: You became the CEO of Helen of Troy after the board ousted the company’s founder. What was it like stepping into that? Did you have any reservations?

No. I was very confident, because I had been working with the board when there was a possibility of such a change. It was only their decision – certainly not mine. But what would we do with the company? It has involved the things we have been talking about. I was very confident those were right for the company and didn’t feel at all concerned that the company would not do well even in a difficult transition.

Q: Shareholders were unhappy about founder Gerald Rubin’s $42-million pay deal, expressing their displeasure in a painful say-on-pay vote. What have you done to repair the relationship?

I made a personal effort to reach out to shareholders almost immediately. I got on the road to meet with shareholders. They were not pleased with the past situation and wanted change and wanted to be heard. It’s safe to say there have been more than 200 shareholder meetings over the last two years.

Q: Have you considered paying a dividend?

We have. Instead, we decided to deploy our capital differently for now.

It gives us the opportunity to take our significant cash flow and deploy it toward our strategy – like an acquisition. In some cases, we have also done stock buybacks.

Our debt is roughly 2.6 times our EBITA (earnings before interest, taxes, depreciation and amortization), so there is room to make further acquisitions.

Q: How many people does Helen of Troy employ worldwide?

Q: How many do you employ in El Paso?

More than 400. We’ve made a lot of changes in the organization, and people originally had the concern that we might leave El Paso or radically reshape it.

Q: How committed are you to El Paso?

Q: Why keep the headquarters in El Paso?

There are many advantages to El Paso. El Paso has a high quality and stable labor force. From a cost standpoint, if it were somewhere else, it would probably cost more, frankly. We have deep roots here. We just put a new data center here – a significant one.

Q: There were a lot of executives who worked in El Paso when Rubin was CEO.

Some of those positions have been moved away. The global chief of operations is here; that job didn’t exist before.

Q: You live in Boston. Is it unusual for the CEO of a company not to live in the same city as the headquarters?

It’s more and more common in global operations. About 25 percent of our global workforce is here in El Paso. The work of a CEO is to face the marketplace – not the internal administration. Three of our four business divisions and the vast majority of our sales are outside of El Paso. That said, we are rooted here.

I now have an apartment in El Paso. I’m here this week, and I’ll be here the week after next. You might think I’m in Boston the other three weeks. That’s not the case. I am on the road often. It’s just the nature of the modern world.

Q: It’s a tough retail environment, and the company’s net income was down slightly year over year in the most recent quarter. What headwinds are the company facing?

Traffic is generally down or flat at a lot of brick and mortar retailers while it grows online. Same store sales are down. The economy, which is largely consumer driven, is growing, but a lot of the activity is online.

We have a significant direct-to-consumer business with Healthy Directions. Importantly, we are diversified so when one area is down, another might be up so we can get a consistent result.