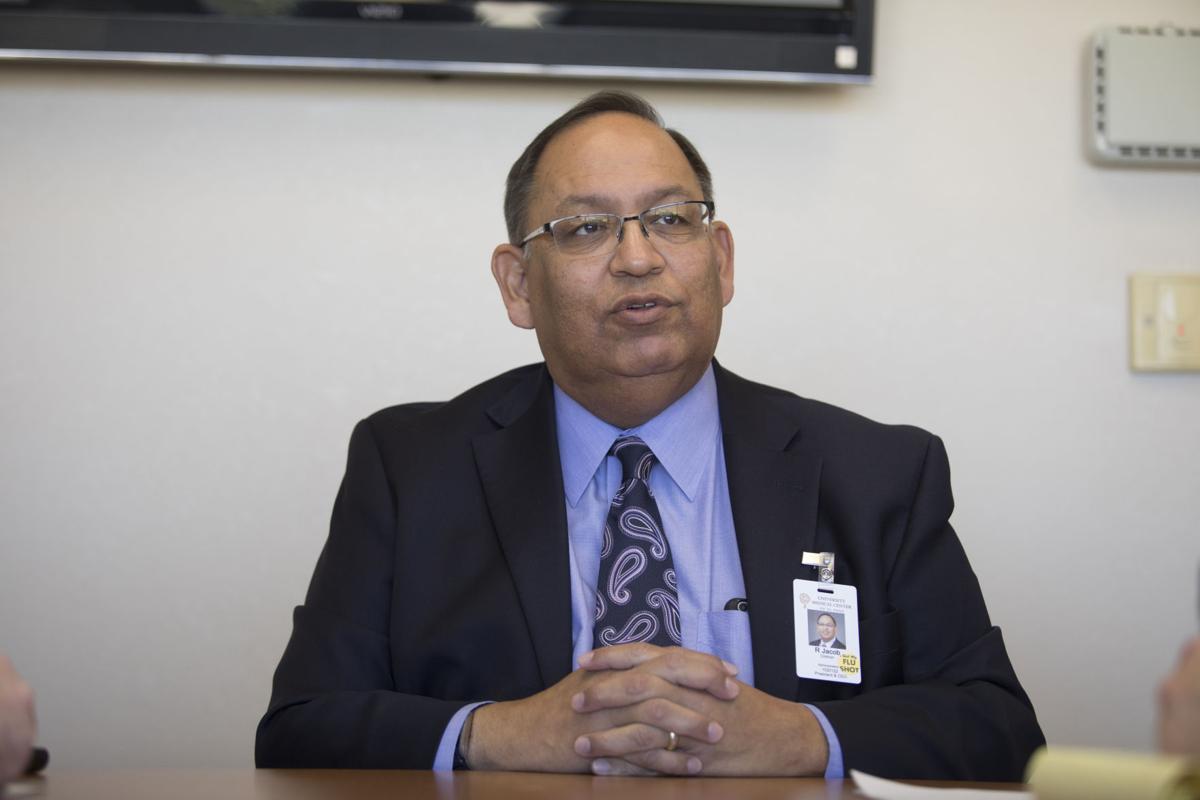 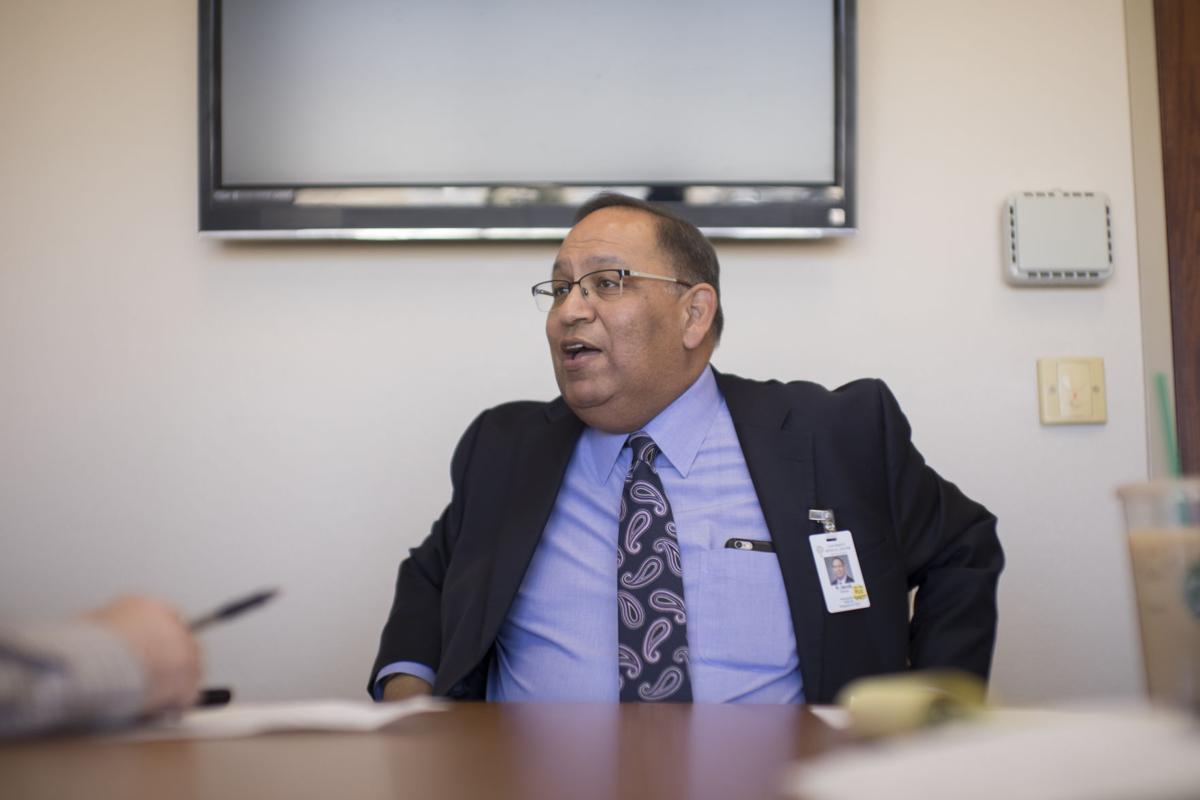 His new salary is $480,000, a little higher than that of the man he replaced, James Valenti, who had been UMC’s chief executive for nearly 12 years.

Cintron, who was raised by a single mother in one of the city’s poorest neighborhoods, started working at the hospital when he was a 17-year-old junior at Burges High School. Back then, the hospital was known as Thomason General.

Seventeen years later, he left Thomason – after earning a bachelor’s degree in engineering and two master’s from UTEP – and embarked on a career in hospital administration, not expecting to return.

Cintron also had two stints at Del Sol, the first from 1991 to 2002, where he began as director of engineering operations and rose to vice president before moving on.

He returned to Del Sol in 2006 as chief operating officer and then became chief executive of El Paso’s busiest private hospital.

While at Del Sol, he said, a competitor approached him to enlist his support in opposing the county’s efforts in 2007 to establish a new, nonprofit children’s hospital.

“We didn’t want to do that, and they said, ‘Why not?’” he recalled. “We said, ‘You built a hospital near me on the Eastside, and I didn’t fight you for that. Competition is good.’”

Today, partly due to the Affordable Care Act, also called Obamacare, the landscape of medical services in El Paso is far more competitive than it was a decade ago, with new hospitals, urgent care centers and emergency rooms popping up.

Cintron met with El Paso Inc. just before the New Year and talked about going home again, competition, the genesis of the new teaching hospital that’s a collaboration with Texas Tech University Health Sciences Center El Paso, and everyone’s biggest worry when it comes to health care – what happens after Obamacare.

Q: Are you concerned about President-elect Trump’s promise to dismantle Obamacare?

We don’t know what’s going to happen. We were in Austin recently, and the Health and Human Services commissioner, Charles Smith, is working really well with a lot of the hospitals in trying to see that we maintain funding support for our public hospitals.

We think there will be some reasonableness, some modifications of the program, maybe tweaks in how the funding is applied. But the fact that nobody knows forces everybody to think about the worst-case scenario.

Q: What difference has Obamacare made in El Paso?

To be able to perform hundreds of thousands more procedures than we would have done.

The Affordable Care Act allowed people that couldn’t afford insurance to get it at a lower rate. That gave those people the choice to go to any hospital.

It also allowed for the development of programs to increase accessibility for our patients.

Private and public hospitals in partnership developed various projects to be able to do that – whether it be the clinic buildings or teen centers or bringing in doctors and urgent care centers.

All these were designed to improve the system of health care in our community.

Q: Because of Obamacare?

Q: Traditionally, county hospitals provided medical care to indigents. But UMC now competes with private providers and is opening big, state-of-the-art clinics. Is that regarded as unfair by the private sector? How did you see it when you were at Del Sol?

If we were not competitive, we would have to go to the property owners for $180 million a year, double what they pay now. I don’t think property taxpayers, including me, want to do that.

So on the one hand, your public and private hospitals compete, right? And it’s fair competition.

We didn’t want to do that, and they said, “Why not?” We said you built a hospital near us on the East Side. I didn’t fight you for that. Competition is good.

So why should our county hospital be denied the same right to compete?

Q: Tenet is ready to open a big new hospital on the Westside, and you’re building a large clinic nearby. Somebody had to ask why UMC is building so close.

The truth is we had the land there before that hospital was to be built. I don’t know if they knew the clinic would be built, but we owned the land.

And in truth, Texas Tech University approached HCA, Tenet and UMC in the same room when they were looking at having a partner build that hospital on the Northwest side.

They came with all three in the same room and said, “Would one of you do that?” HCA and UMC decided not to, but Tenet did.

Yeah, Tech had asked and said we don’t want to be financially responsible for it, but we would like a hospital built because we want to bring in more (physician) residents. Tenet agreed to do that.

Q: You worked at Thomason Hospital as a young man, and now you’re running the place. What did you find at University Medical Center when you came back and what has coming back meant to you?

It’s a much more complex organization. When I left here, I was 34 years old and an assistant administrator.

We had been in our relationship with Texas Tech for a few years, but I come back now and see a much stronger, more intricate relationship in their growth and the services they offer.

When you compare now to then, the types of procedures done and the technology being used are far and above better. It’s a beautiful organization, and what has remained the same is the culture.

Q: Was it ever on your mind that you’d come back to lead this hospital?

No, it was not. When you’re working, you always think fondly of the places you’ve been.

When I left Del Sol Medical Center the first time, I never thought I’d come back. I left for a few years, went to Chicago, San Antonio and Southern California, and then came back. It was nice. You get to see some of your coworkers again.

What’s really interesting is running into people who were born when you were here and they belonged to your friends and now they’re working for you.

You realize how you’re now looking at the next generation coming in and you know they’re going to pick up the baton and continue providing great health care.

Q: You were the CEO of a large, for-profit hospital and now you’re running a large public hospital. What’s the difference in the mission and financial considerations?

A private hospital has a clearer focus. It is shareholder value, revenue generation and expense management.

In the public sector, I think to some degree they have a little more flexibility in doing the things that a private hospital might not do that really benefit the patient in your community.

Right, my second day here we had to ask for a tax increase. The tax increase we got was about $4 million. Even with that increase, the total property tax coming in is $90 million.

Our uncompensated care expense, not what we charge but what we actually pay, is $180 million.

In a budget of $700 million, taxes only cover half the loss. This was a surprise to me, and a good one.

So kudos to UMC that they’re able to make up that $90-million loss on their own operations.

The differences in financial considerations aren’t as much as you would think. A private hospital’s main goal is increasing shareholder value. They work for the investors, who can be all over the country.

Q: How big is your medical staff?

Total staff, including the clinics, is close to 2,800 employees. Private and Texas Tech physicians are 470 and nurses are about 900.

That may seem like a lot, but we have half as many physicians for the population compared with other cities in Texas. We still have a shortfall for physicians.

Q: How many people do UMC and the clinics see and treat a year?

We get about 56,000 emergency department visits, over 106,000 visits to our women’s and regular primary health clinics. We do about 3,400 deliveries per year. In-patient surgeries are about 4,100 cases. Outpatient is about 3,200. We’re a very busy facility.

It provides a lot of care for a community that’s not just El Paso. It also includes West Texas, and UMC is one of four trauma centers serving all of New Mexico. We’re the only Level 1 trauma center within about 230 miles.

Q: Why is running a Level 1 trauma center so expensive?

You have to be able to take a trauma patient that hits your ER into the operating room within 15 minutes. The cost per trauma bed is very high because of the resources assigned to it.

Q: UMC has nine clinics now and two new, large clinics will open soon, on the Westside and the far Eastside. Tell us about them.

They’ll sort of be like the one in Northeast that’s off Kenworthy. The clinics are anywhere from about 35,000 to 45,000 square feet and will have 50 exam rooms each and will be able to provide not only primary care, but, in cooperation with Texas Tech, we’ll be rotating specialties like orthopaedics, obstetrics and other specialties, so anybody can access different types of specialties for their care.

The Westside clinic will also include a rehabilitation section for physical and occupational therapy. They’re both on properties large enough that if we wanted to add an attached, freestanding emergency department or an ambulatory surgical center, we could. There’s room to grow and both will have pharmacies.

Q: Will the private sector have anything like these clinics, especially the new ones?

No, but they do have clinics. Some are smaller. Some are not as small as you’d think. They might have outpatient imaging centers, freestanding EDs and urgent care centers. All of these are access points because the consumer really wants to stay close to home.

Q: What does your wife, Theresa, do?

I’d like to say she stays at home, but she probably puts more miles on her car than I do. She works with the Lundy PTA. I couldn’t do what I do without her.

She runs the house and looks after five kids. Three have moved out and we have two left. She’s the one who keeps the family together.

Q: Have any of your children gone into medicine?

Yes, my oldest son, Michael, is an attorney and works with the Centers for Medicare and Medicaid, the guys that do our regulations. I have another son, Nathan, who is a math teacher at Franklin High School.

Matthew is probably the closest to getting into health care. He is an emergency medical technician, an EMT. My daughter, Sarah, is a senior at Franklin. And then I’ve got a fifth grader at Lundy Elementary, Noah.