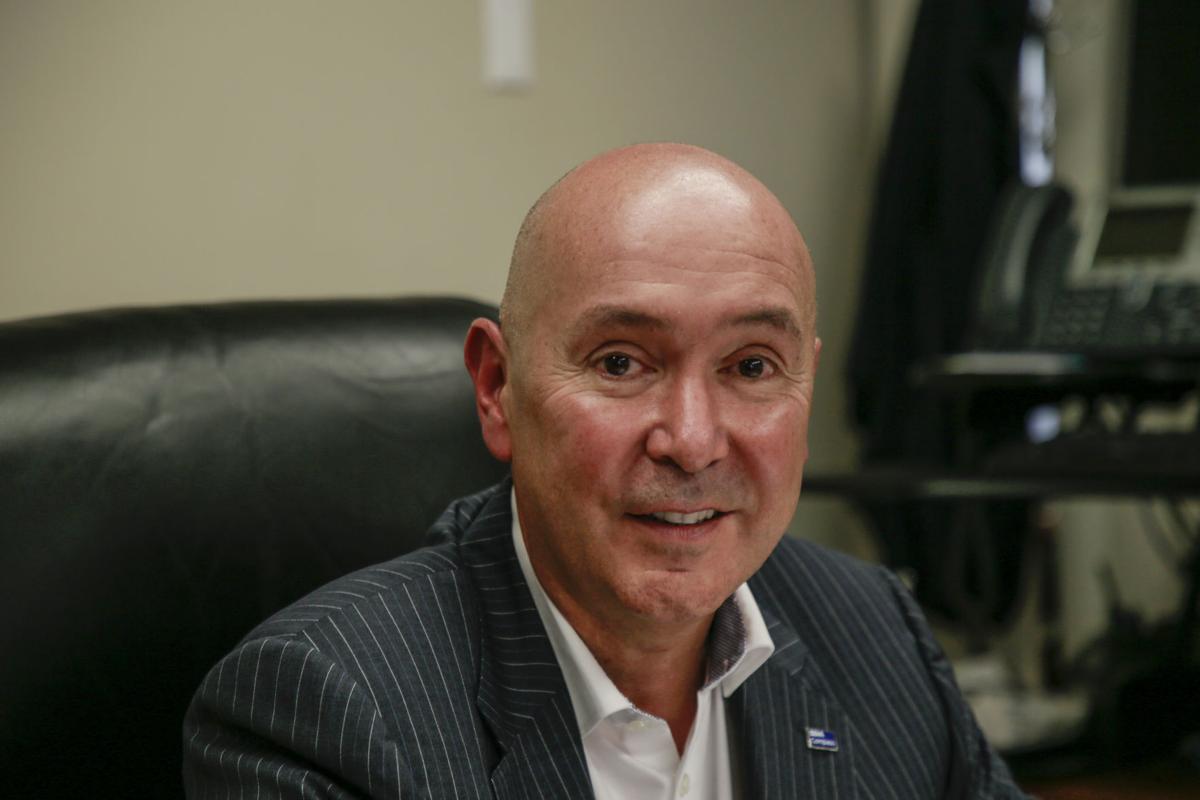 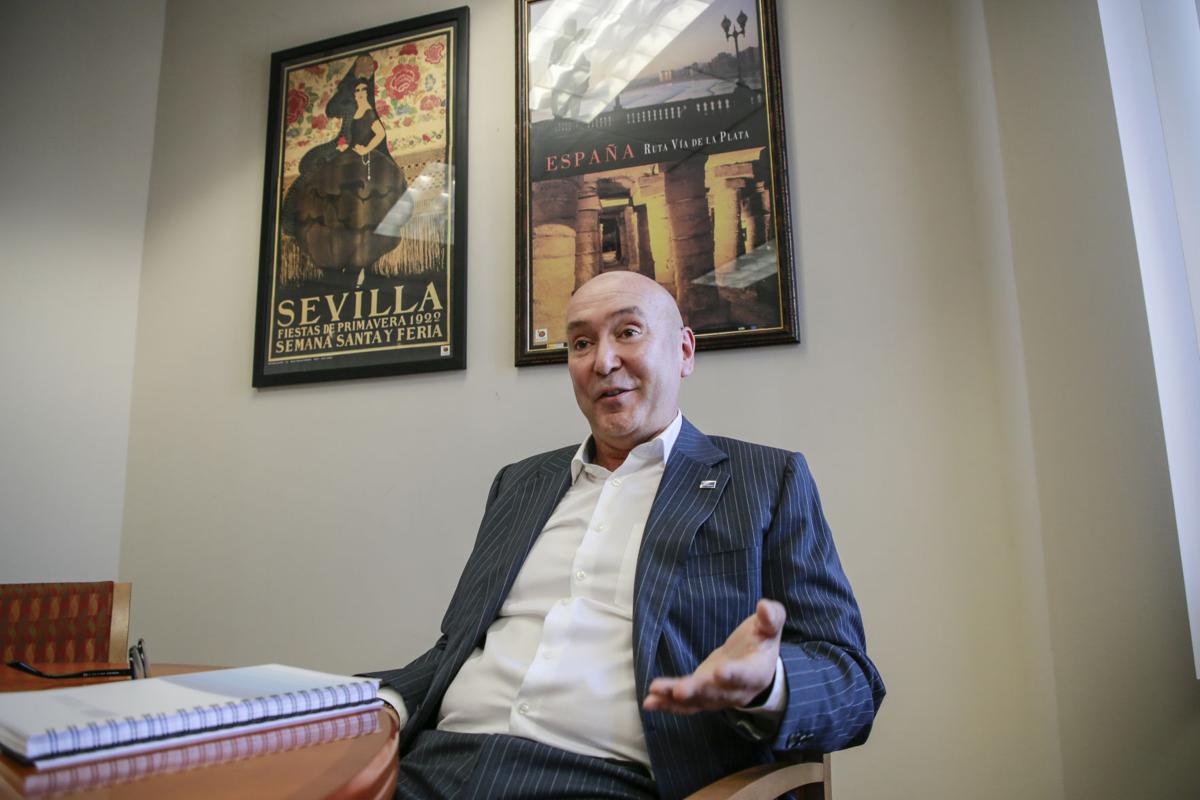 Hector Villegas grew up looking at the stars from his home in Buenos Aires, Argentina, and imagined one day he’d be among them as an astronaut.

He was born to immigrants; his father was from Spain and his mother from Italy. They lived together in Argentina until moving to Spain when Villegas was 10.

As he grew, so did his ambitions. A young businessman fresh out of the Universidad Argentina de la Empresa, Villegas decided to go into banking because it ensured he could travel and would provide a steady income.

He got his first job with BBVA bank in Argentina. There, he made a name for himself as a senior relationship manager, fostering connections with the world’s biggest companies. His work earned him a position as vice president of North American corporate and global banking in New York City in 2001.

“I had clients from companies like McDonalds and Omnicom,” he said in an interview in his office in West El Paso.

Villegas, 53, came to El Paso in 2010 to lead the bank’s operations in El Paso and Southern New Mexico as city president and executive vice president.

He and his wife have grown fond of the Sun City and have planted themselves in the community. Their four-year-old was born here.

“My wife is from Poland,” Villegas said. “I was thinking maybe for her it was going to be more challenging to adapt to the market, but I was wrong. She loves El Paso and is involved with the Polish association and doesn’t want to move.”

BBVA bank is headquartered in Madrid, Spain, and Villegas’ guests are reminded of that when they walk into his office. He has several paintings and pieces of art that reference the European country.

“We are present in over 30 countries around the world,” he said. “But you know, I try to remember my origins and Spain.”

He sat down with El Paso Inc. and talked about the future of border banking, tariff turbulence, and the app that can transfer money from a smartphone to ATMs or retail stores in Mexico.

Q: How does banking down in Argentina compare to New York and El Paso?

Well, you have to be very flexible and ready for all the different crises that you have in countries like Argentina. You have to be accustomed to working in an environment with hyperinflation.

I have to say that I’m very lucky to be in El Paso because I’m learning about community markets. It’s a different environment, and I will say that the stress level in El Paso is much, much lower.

Q: What is the global market like right now, at least from a banking point of view?

There is a lot of turbulence in the global market. I would say that it is related to all this back-and-forth with tariffs between the United States and China.

Also, you have a lot of market adjustment in emerging markets like Turkey, Argentina and Brazil, but this is something that we have to get accustomed to because we don’t see that it’s going to change in the near future.

The most important thing is that the United States economy is doing pretty well. So we have a strong foundation here.

Q: How does the discussion about tariffs between the United States and China, Canada, Mexico and the European Union affect a bank in El Paso?

We are all connected. It doesn’t matter where you live nowadays; everything is going to end up affecting us.

In El Paso, you know very well that we have our sister city, Juárez. Any change that happens in Mexico is going to affect both countries. Anything that happens in China is also going to end up hitting the El Paso community.

Why? For example, there are many Chinese maquiladoras in Mexico. So if something happens with the tariff discussions, that can affect El Paso.

In our case, having the international experience, we are prepared for any changes in the global market.

Q: What does it mean to have international experience and have BBVA Bank in El Paso?

That is important because we own the largest bank in Mexico: BBVA Bancomer. We do believe that cross-border activity is very important for our group.

Is it easy to do business nowadays and across the border region? No. You have to be very careful. There are a lot of regulations that have affected cross-border business. But BBVA Bank is still committed to it.

Our clients are very understanding, and they appreciate that BBVA still is supporting them in the cross-border business. Nowadays, you know, you have to be very cautious.

Q: What opportunity does BBVA see in El Paso and the border region?

Cross-border business is important for the group, but in El Paso, we have a strong presence on the commercial side. We are not only growing in loans but also deposits and cash management solutions with our clients.

We have a strong presence in retail banking, and we do have international wealth management. We are seeing many opportunities, and we are optimistic that next year’s going to continue the positive path.

Q: Are you seeing deposits from Mexican companies and businesspeople?

Oh, yeah. I mean we have both. We have local deposits, and international wealth management is our arm that focuses on investments from Mexican business.

Q: What’s the future like for border banking? We have an incoming president in Mexico, Andres Manuel Lopez Obrador, and nobody is really sure how he’s going to get along with President Donald Trump.

We are positive now, actually.

At first, there was a lot of uncertainty when there was discussion about the North American Free Trade Agreement and when Obrador won in Mexico. But we are seeing the future in a more positive way because the new administration in Mexico is not planning to make, big and significant changes – at least for now.

NAFTA will continue and Canada is joining again. That’s a positive for us.

Q: Is there any way that you can gauge just how big BBVA is in El Paso?

I cannot give you numbers specifically for El Paso.

The big picture, we have approved $2.9 billion in loans to small businesses between 2015 and 2017. That was a significant growth in small-business lending. That was in the whole company.

Q: Does BBVA really get into small business lending or is it more wealth management?

The commitment for BBVA is to grow $6.1 billion in small-business loans from 2015 for the next five years. We are almost in the middle of that commitment. We are a preferred lender with the Small Business Administration.

In 2017, 96 percent of our small businesses loans were approved for amounts below $100,000. That means we really are focusing on small business.

Q: Can you tell me a little bit about the benefits businesses from Mexico get when they bank with BBVA as compared to other major banks?

We have different services that we can offer to our clients. On the mortgage side, we still offer a foreign national program, which means that Mexican nationals can buy a property in the United States. And we also offer another product that is called Tu Opción, which is the reverse. That’s where a U.S. citizen can buy properties in Mexico.

The other thing that we are offering internationally is a mobile app, Tuyyo. What you can do is you can transfer money to Mexico. The neat thing is when you do that, you can do everything on your smartphone, but the recipient of the funds can use all the ATM’s that Bancomer has in Mexico.

You can transfer the funds also to any retail store in Mexico. When you send those funds, you can interact with exchanging pictures or text messages. In the near future, voice and video messages will be included.

If you have a company that wants to interact with us here, we can serve them in El Paso. And if you have companies in El Paso that want to operate in Mexico, we can do the same with BBVA Bancomer.

Q: Are there fees?

Referring to the Tuyyo app, there is no transaction fee. There is a fee that is called the effect fee. It’s just to convert the currency.

Q: How did you come to be in El Paso?

I have to tell you that when I was told I was being transferred to a different market, they said,  “Well Hector, we have a position for you in an exotic market.” And I said, “Okay.”

They told me it was El Paso, and one of the first things I had to do was look at the map and say, “Where is El Paso?”

My boss said El Paso is a very important market for BBVA, and they needed someone with my background. So, I came here alone for the first six months. My wife was working in New York. I was flying back and forth.

I am Hispanic and this community is 83 percent Hispanic. That’s easy except for probably my accent.

Q: How have things changed for you since you moved here?

Everybody is talking about the strong growth in El Paso, and it is true. I have to tell you that we have seen a lot of changes since we moved to El Paso. You name it – Downtown, the highway, the hospitals, the ballpark

Maybe we don’t realize it that often, but when you travel, you can see how El Paso is changing. I am sure El Paso by 2040 is going to be a completely different market.