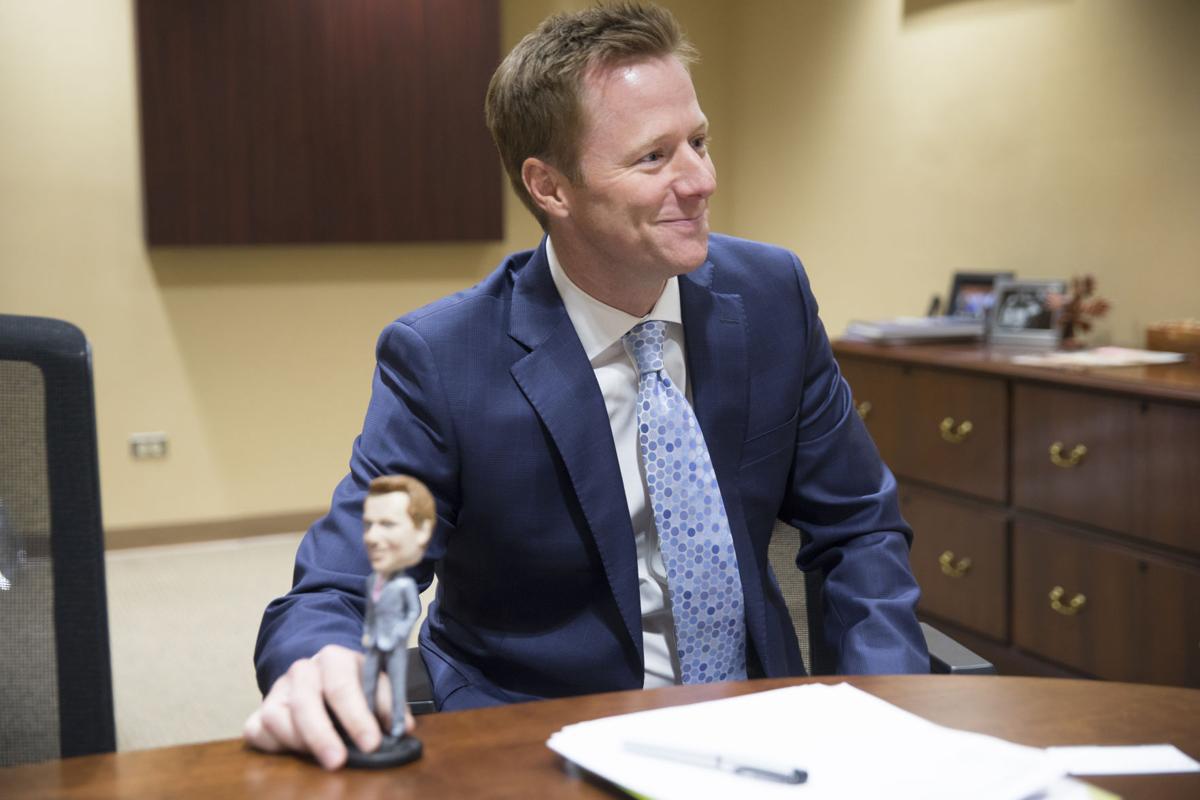 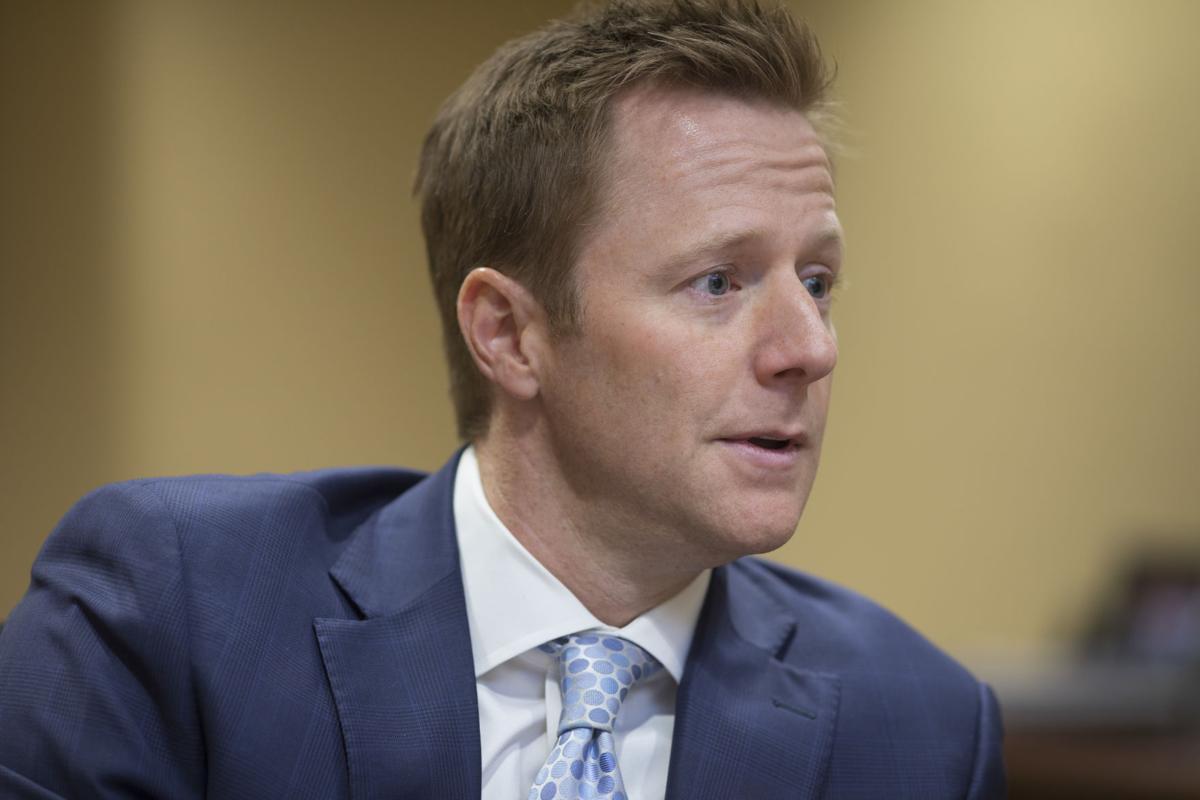 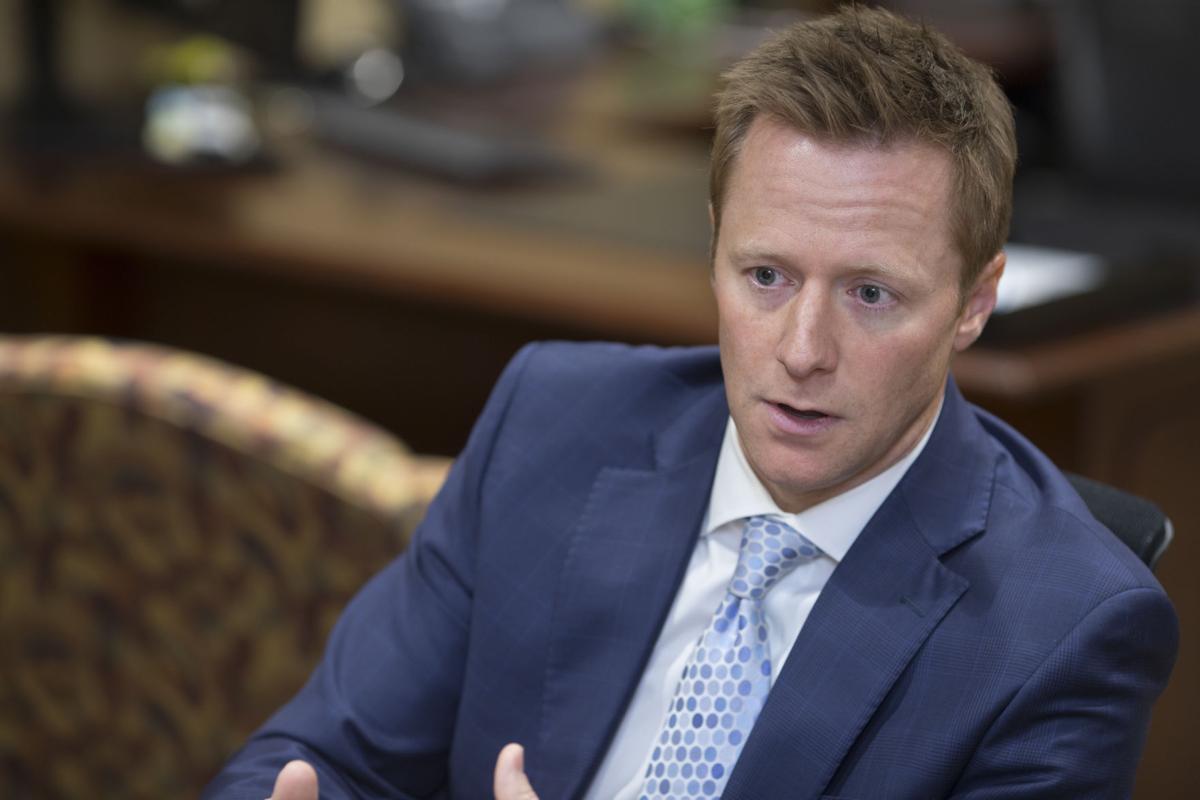 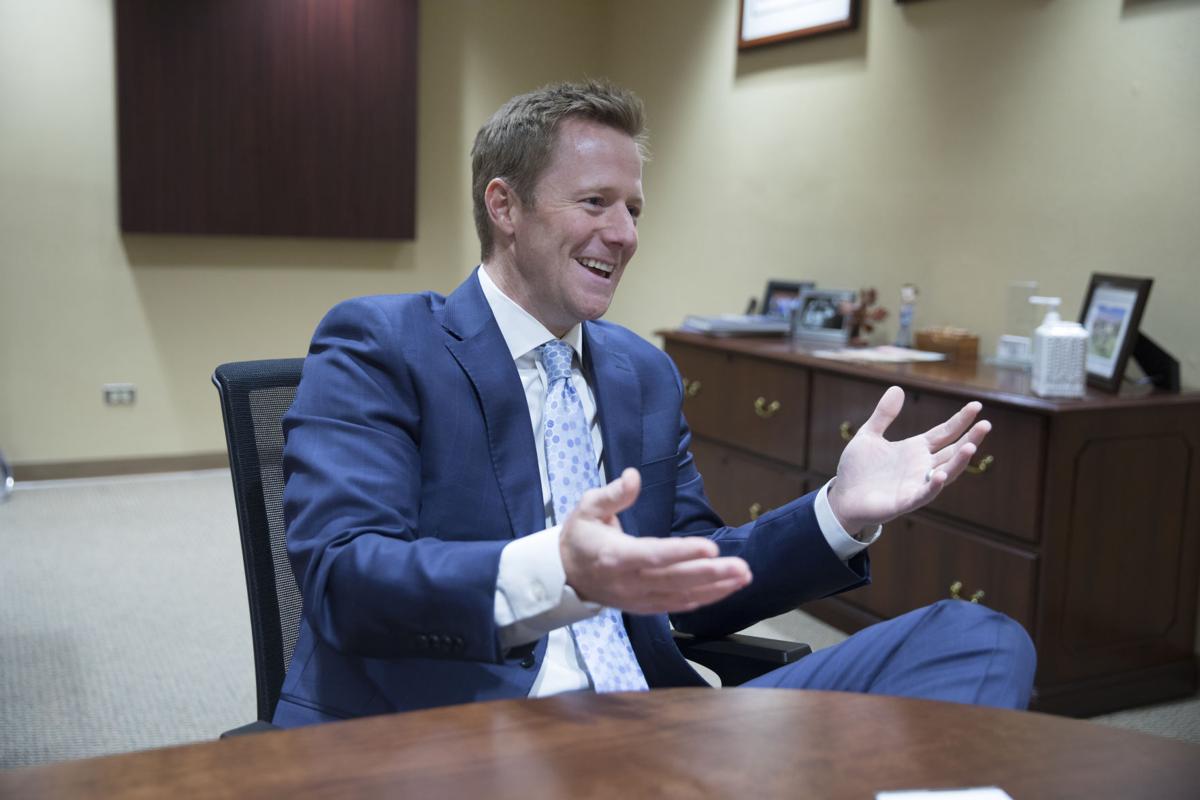 When David Shimp was a contestant on “Who Wants to be a Millionaire,” he promised himself that no matter what, he would not drop out before the $32,000 question.

Shimp, who was in graduate school at the time, would risk his winnings and try to answer – even if he had to guess.

The boom camera swept up to his face, the lights went down and the music swelled. Was being on the high-stakes game show as stressful as running one of El Paso’s busiest hospitals?

The 38-year-old leans back and smiles. It’s a perfect spring morning, and we’ve met in the executive offices at Del Sol Medical Center, a 350-bed hospital operated by hospital giant HCA Healthcare. Pictures of golf courses cover the walls, and there’s a putter hidden in a corner Shimp uses for stress relief.

He recalls the question – and correct answer – quickly. It’s seared into his brain.

According to the 2000 census, which state has the highest population of Native American citizens? The choices were Oklahoma, California, Arizona or New Mexico.

He used his 50:50 “lifeline” to narrow the choices to two states – Arizona and California.

“I said Arizona, and the answer was California,” Shimp says. His 15 minutes of fame were over.

By now, Shimp has gotten his feet wet. He became CEO of Del Sol Medical Center on the Eastside more than a year ago.

Shimp learned about the opportunity from his boss the evening before he planned to propose to his girlfriend. She said yes to marriage and he said yes to the job offer. A couple months later, two days after getting married, they moved to El Paso. His first day of work was on Valentine’s Day.“It was a little bit of a whirlwind. It’s been wonderful. We have absolutely loved El Paso,” Shimp says.

Shimp came to El Paso from Austin where he was chief operating officer at St. David’s Medical Center and oversaw more than $100 million in capital projects.

He has a bachelor’s degree in leadership studies from the University of Richmond and a master’s in health administration from Virginia Commonwealth University, where he got the opportunity to apply to be a contestant on “Who Wants to be a Millionaire.”

Del Sol is one of two hospitals in El Paso owned by Nashville-based HCA Healthcare, the largest for-profit hospital chain in the country. The company also operates Las Palmas on the Westside.

In his first major interview since becoming CEO, Shimp revealed plans for multimillion-dollar investments in the El Paso area.

He also talked about the crash that inspired him to go into health care, what the hospital is going to do with the 17 homes it has purchased, and why he has a bobblehead of himself.

Q: How did you get into health care?

My dad was T-boned by an 18-wheeler in 1987. I was 8. He spent six weeks in the hospital, and was in a hospital bed at home for another six months or so. I ended up spending a lot of time around the hospital, getting to know orthopedic surgeons and physical therapists.

A very impressionable age. I think everybody who is in health care has some sort of reason why. That’s really my why.

Q: The average tenure for a hospital CEO is around five years. With that in mind, what do you want to accomplish here?

There is an element of transientness for hospital administrators. I spent three years in Denver, six years in Oklahoma City, four years in Austin and I’ve been out here for a year now. I’ve not come here with any sense of a time horizon. My wife and I have bought a house. I’ve changed my cellphone number to a 915 area code. I’m here; I’m committed.

What do I want to be able to accomplish? Changing the way – especially after having been here for more than a year now – changing the way health care is provided in El Paso.

A lot of people will seek care outside of El Paso, and I want people to realize the level of care, the level of programs and patient experience in El Paso is commensurate with any other major city in the U.S.

Q: How many El Pasoans are going outside the city for care?

I don’t have that data, but we can get at some of it. It exists in pockets. Cancer care, for instance, is something that people will absolutely travel for. There are some elements of higher-end surgical services that we just don’t have the depth and breadth of specialization yet, but we are increasing that.

We have a neurosurgeon who is, I think, one of only 120 in the country that is neurosurgical trained as well as endovascular trained. So they can go in and do procedures that are being done at the Cleveland clinics, Mayo clinics and Johns Hopkins of the world here in El Paso.

Q: Competitor Tenet Healthcare has built a new hospital in Northwest El Paso, the county hospital has expanded, and freestanding clinics, urgent care centers and emergency rooms have popped up across the city. How is HCA Healthcare responding to the competition?

The simplest way to measure hospitals by size is through discharges; that gets at market share. Although there are some hospitals that are close, Del Sol is still the largest single hospital in El Paso by way of total discharges. So we have a significant presence in the region.

Q: Where do you want to direct investment?

A lot of it is driven by the needs of the community. One component of that is having phenomenal women’s services and being able to care for the sickest of babies.

Q: That makes sense with all of the population growth. There are a lot of young families here.

Absolutely. Cardiovascular services is another significant need we see in the community. Neurosciences is another area, specifically stroke. Orthopedics is another. As we have an aging population, joints eventually wear out.

We are kind of in a hotbed of liver disease.

Q: A hotbed of liver disease?

Yeah. Everything from hepatitis and liver cancers to cirrhosis.

Some of it is lifestyle. Some of it is genetics. But really it impacts the entire border region from Albuquerque all the way south if you look at the data.

As El Paso is growing, one of the key things Las Palmas Del Sol Healthcare wants to invest in is delivering care closer to those communities.

We are looking at the development of a multispecialty physician clinic in Horizon City. Right now, we have two freestanding emergency departments. Another is under construction and one has just been approved. It’s four total.

We are spending $63 million for the facility expansion at Las Palmas that will be completed in October.

Q: Any plans for Del Sol?

Although it’s not yet approved, we do have significant plans for expansion here at Del Sol. We are a very busy hospital with semiprivate beds. So one of the key things we are trying to do is grow the number of beds and transition to fully private beds. Looking at the general stats out there, to add a bed to a hospital is about $1 million per bed. That’s what we are still vetting.

Right now our helipad is on the ground level. Part of this plan would be to relocate the helipad on top of the new tower.

Q: Historically, El Paso has had a large uninsured population. Are you seeing that change at all?

Q: Over the past decade, Del Sol has purchased 17 houses behind the hospital. Employees use them for parking, sometimes parking on lawns and across driveways. Area residents complain of the poor condition of some of the properties and the parking situation. What is your plan for those properties?

We do have a parking problem here. The homes are an eyesore and a safety risk. I was excited to be able to announce to employees yesterday that we recently got funding to the tune of about $850,000 to be able to tear down those homes and build parking lots.

Q: When will that happen?

We’ve started as of three days ago. I’ve gotten to know and have worked really well with city Rep. Henry Rivera and have been able to talk at some of his town halls to residents.

Q: How does the performance of this hospital compare to others nationally?

Within HCA we have all sorts of benchmarks among our 172 hospitals. When I first started, we were ranked No. 156 out of 172 hospitals for patient experience. Since coming on board, Del Sol has been as high as No. 32. We are significantly changing the way patients are experiencing their care.

And then there are national government rankings. We were historically below the national average in how patients were experiencing their care. Now we have changed things for the better and have been in the top 25th percentile of all hospitals across the nation.

Q: How did you accomplish that in a big organization like this?

It’s really been every patient every single day with all the staff here, whether it’s the nursing staff or lab techs. What we do here becomes routine to us, but it is anything but routine to the people who ultimately trust us with their care.

One of the tactics we use is narration of care. So a nurse or tech will describe what they are doing when they come in, helping make sure the patient and family know what is happening in a very scary situation.

Q: How has it been moving to El Paso from Austin?

As I look back at my time in Austin, it was fantastic. But I don’t think it’s this mecca that people consider it to be. There have been a lot of people who have drunk the Kool-Aid about Austin. It’s no longer the Austin a lot of people know.

Q: Is that a bobblehead of you over there?

I came to El Paso from St. David’s Medical Center in Austin. The radiology team got me a David Shimp bobblehead for boss’s day one year. So sometimes when I don’t want to say something I just ask Bobblehead Dave. (Laughs)

Scrubs hands down. It is by far the most realistic and captures life in a hospital better than any other show.

Stonewood Modern American Grill. I started work on Feb. 14, 2017, and it was the first place I took my wife to dinner, and we celebrated Valentine’s Day. Unfortunately, it has gone into “hibernation” but may be opening again in another location.

I have a toiletries bag with all of my morning and evening routine essentials. To just be able to grab it and go makes travel so much easier.

How many unread emails?

Tool you can’t live without?

I always carry a pen in my pocket.

I am not a big emoji fan. If I had to pick one, I’d have to go with . It is a great one to send my wife to express that I am thinking about her.