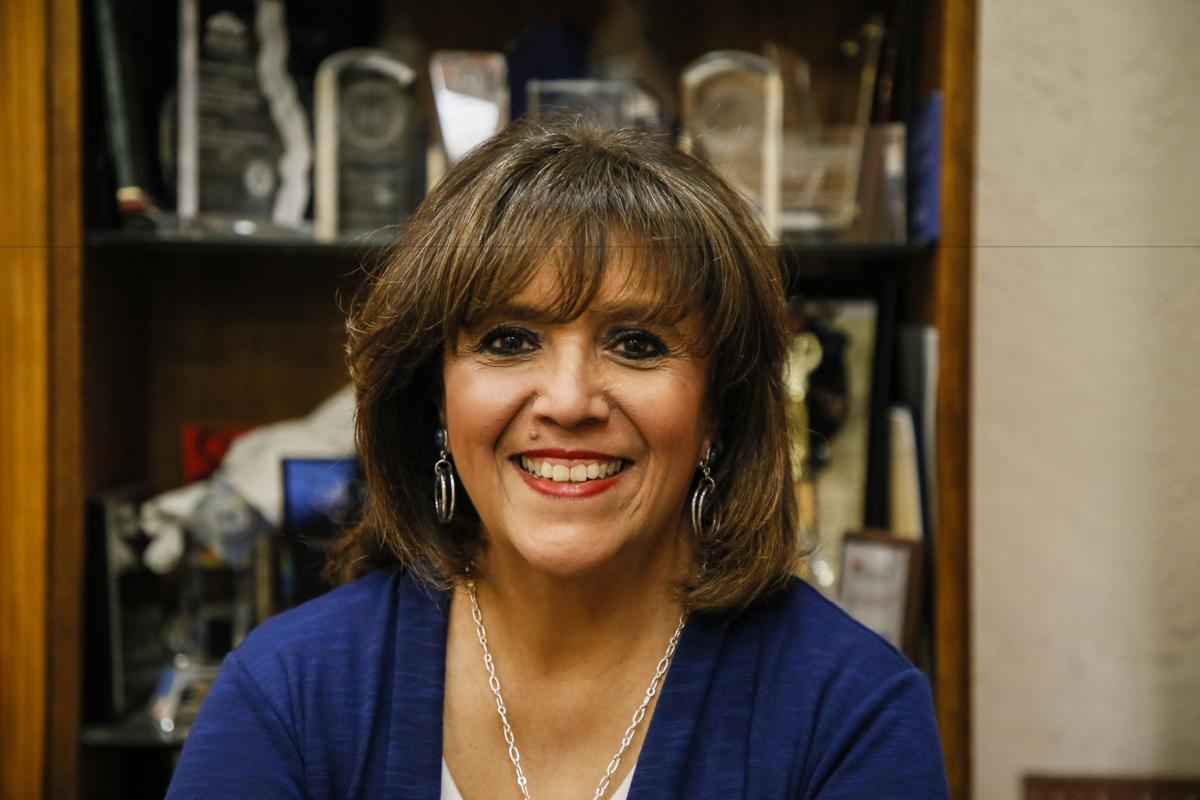 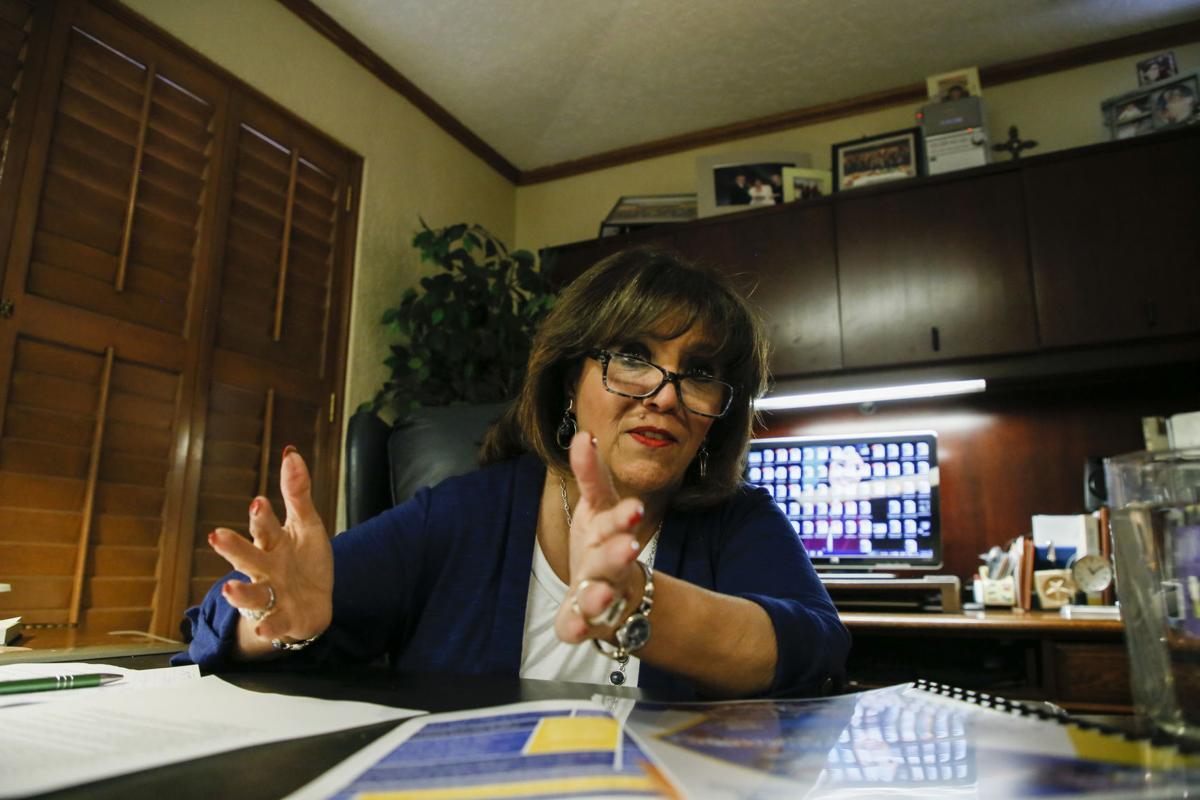 El Paso native Cindy Ramos Davidson was 25 years old when she took her first job at a chamber of commerce. She had just moved to Albuquerque and was searching for a marketing position at one of the city’s top 100 businesses. She approached the city’s chamber for help and was promptly offered a secretarial job.

Since then, Ramos-Davidson has spent more than 40 years in the chamber business, working for three different organizations. Next year, she will celebrate her 20th year as the CEO of the El Paso Hispanic Chamber of Commerce.

“You either love this business or you don’t,” she said. “There’s no middle of the road because it is a difficult industry to be in. You’re dealing with people’s wealth.”

Ramos-Davidson returned to El Paso in 1990 and served as vice president of the Greater El Paso Chamber of Commerce’s Business Opportunities Council. She started work at the El Paso Hispanic Chamber of Commerce in 1998 and was named CEO in 1999.

“This chamber came knocking on my door and asked if I would be willing to come over,” she said. “One of the conditions that I did say was that if at any point, the CEO position opens up, please allow me the opportunity to interview for it first before you go out and do a national search.”

Founded in 1993, the El Paso Hispanic Chamber of Commerce works to elevate Hispanic entrepreneurs and Hispanic-owned businesses in El Paso.

Under her leadership, the chamber has gone from ground floor offices in the former Chase building at 201 E. Main Street in Downtown to its standalone building on East Missouri Street in Central El Paso.

Since 2003, the chamber says it has generated more than $1 billion for businesses in procurement and bid matches and in estimated economic impact to the community.

“We also have great relationships with all our financial entities. We know what banks will lend what,” she said. “Capital access for small business, specifically minority small business, is critical – always has been.”

The chamber has also received many awards under her leadership, including being recognized as the large Hispanic chamber of the year six times by the Texas Association of Mexican American Chambers of Commerce, and she has been honored as chamber executive of the year three times.

In 2014, the Bel Air High School graduate was honored by El Paso Inc. as a Woman of Impact for her service to the community.

In her office at the Hispanic chamber, Ramos-Davidson talked about the MeToo movement, minority-owned businesses, what she loves about millennials and bidding on the proposed border wall.

Q: How do Hispanic entrepreneurs fare in this market? How successful are they once they open their businesses?

Talent development right now is people working in their company and trying to find the right mix in their company. That’s a challenge for not only minority business but for all business, I think.

Q: It seems like access to capital has always been a challenge for entrepreneurs. How have you seen that change?

From the early years, it has gotten much better. Some of the rules and regulations that have just come through on Capitol Hill are going to ease that up a little bit for some of our community banks, which we’re excited about.

But certainly it’s not exactly where we want it to be, not yet. Our job is to make sure that our businesses are loan-fundable. When they come to us, we really work with them to teach them what a bank is going to look at and what they need.

Q: The MeToo Movement has raised awareness about the issues women face in the workplace. In El Paso, are women able to express if they’re in an uncomfortable situation?

Oh, yeah. That’s what’s great about our Women’s Business Border Center. We do a lot of training in the center to talk about how to position yourself to be able to negotiate and win. And how to respond when you feel that you’re in a situation that’s not comfortable, and what resources you have available so that you don’t feel that you’re out there by yourself.

Q: Is this a huge issue in El Paso?

The bottom line is it should not be an issue. In my mind, that’s huge.

Q: Are there enough diverse voices, women’s voices, in business?

Q: What differences do you see between millennial entrepreneurs and older, more mature business people?

That’s okay, but sometimes in our world, you can’t just leave at 5 o’clock. We have a lot of things we have to do, so understanding employer expectations is important.

Q: What do you like about millennials in the workplace?

I love their energy, I love their connectivity to technology. I love their ability to look at things differently than I do. I have learned to really change my dialogue with that group because the majority of my team is under 40.

Q: So how do some traditions stick around? You mentioned the benches out front as an old business tradition.

People have a lot on their plate when they own and operate a business. They live and breathe it 24/7. We want them involved with us and we want to be engaged with them. We don’t want them feeling stressed here – we want to create a sense of value, and find this is their home.

In the old days, when you did business, you sat on a bench with a cup of coffee, you shook hands and you went to business. That’s why the benches are out there – so we never ever forget that the core business is one-on-one relationship building.

Q: Let’s talk politics. Do politicians who make policy on the state and federal levels have a good understanding of El Paso?

They do not. I will tell you that Capitol Hill needs to get out of the Hill and get into the marketplace. The challenge with many of our political leaders from all walks of life is that many times they get into those offices and they forget by whom they were elected. That’s when we start to see problems.

Q: What policies are affecting our community the most?

Immigration, the border wall policy. NAFTA has to be modernized, not done away with. And the tariffs that they’re looking at, the DACA situation.

Q: What is your view when it comes to renegotiating NAFTA?

NAFTA needs to be modernized. Let’s face it. It was done back in 1994. Think about technology today. We didn’t have then what we do now.

Think about those poor trucks sitting on the bridges – 107 degrees today – and they’re waiting to get a product across the bridge. It’s a human sitting in that truck. Can’t go and do anything until they cross. There’s got to be a better way using technology on both sides of the border because then we’re both winning.

Q: What are your thoughts on El Paso businesses bidding on projects like the border wall?

That was a real contentious issue for us. We talked about it as an organization. Businesses have a choice whether to bid on it or not, and that was their choice. To not bid on it, okay. To bid on it, okay.

We’re talking multiple millions of dollars, so somebody’s going to do it. It might as well be a local business.

Q: Tell us a little bit about how you got into business.

I needed a job years ago when I left El Paso back in 1978 and went to Midland/Odessa. I thought I was going to be this big person in marketing and business in an oil company – and then the oil glut hit. So guess what happened? There wasn’t anything.

I had an opportunity to work with Southwestern Bell. They had just started their diversity program, and I fit the bill because of affirmative action. I worked with them for a couple of years and realized that the Midland/Odessa area was not for me.

I went to Albuquerque, to the chamber there. I got hired as the secretary, that’s what it was called back then. I was in the membership department in the Albuquerque Chamber of Commerce working for five sales reps. I’ve been in chamber work a long time.

Q: And now you’re a CEO. Is this something you’d ever envisioned?

That’s what I was hoping would happen. Well, that did happen a couple of times, but I never walked through that door. I stayed put because I realized that the chamber of commerce was where I needed to be and what I wanted to do.

We want to be able to have a supplier component where our members have the opportunity to connect with all kinds of suppliers at all levels through technology. We want there to be an access to capital corner where all the activities in terms of being able to get money are in this office, without our businesses having to go anywhere. They can do it right here.

We’ve had President George H.W. Bush and Barbara Bush, bless her heart. We’ve had John Quiñones, George Prescott Bush. We’ve had the guy who created hot Cheetos, Mr. Montañez. We also had Tommy Franks one year, a retired general. And we were blessed last year to have the one and only Alex Rodriguez.

Q: How are you able to do that?

Q: What happens behind the scenes?

I am not going to give away my secrets because when I do, everybody’s going to know how to do it!

It is about relationships, connections and networking. That’s the beauty of being in a chamber of commerce. If I didn’t work in this industry, I would not be blessed to meet all kinds of people from all over the world and people from high places and people in key roles.

Q: What kinds of connections do you have?

At a national level, our involvement with the United States Hispanic Chamber puts me right in the driver’s seat with a lot of people at a corporate level.

Our involvement at the state level with TAMAC, the Texas Association of Mexican-American Chambers, certainly puts me in the driver’s seat.

One of the most wonderful things that I’ve ever done in this job was serving on the board of directors of the El Paso Branch of the Dallas Federal Reserve Bank. I was chairman for two years. Never in my wildest dreams would I have thought that I’d be asked to do that.

Never in a million years did I ever think I’d stay in this career.