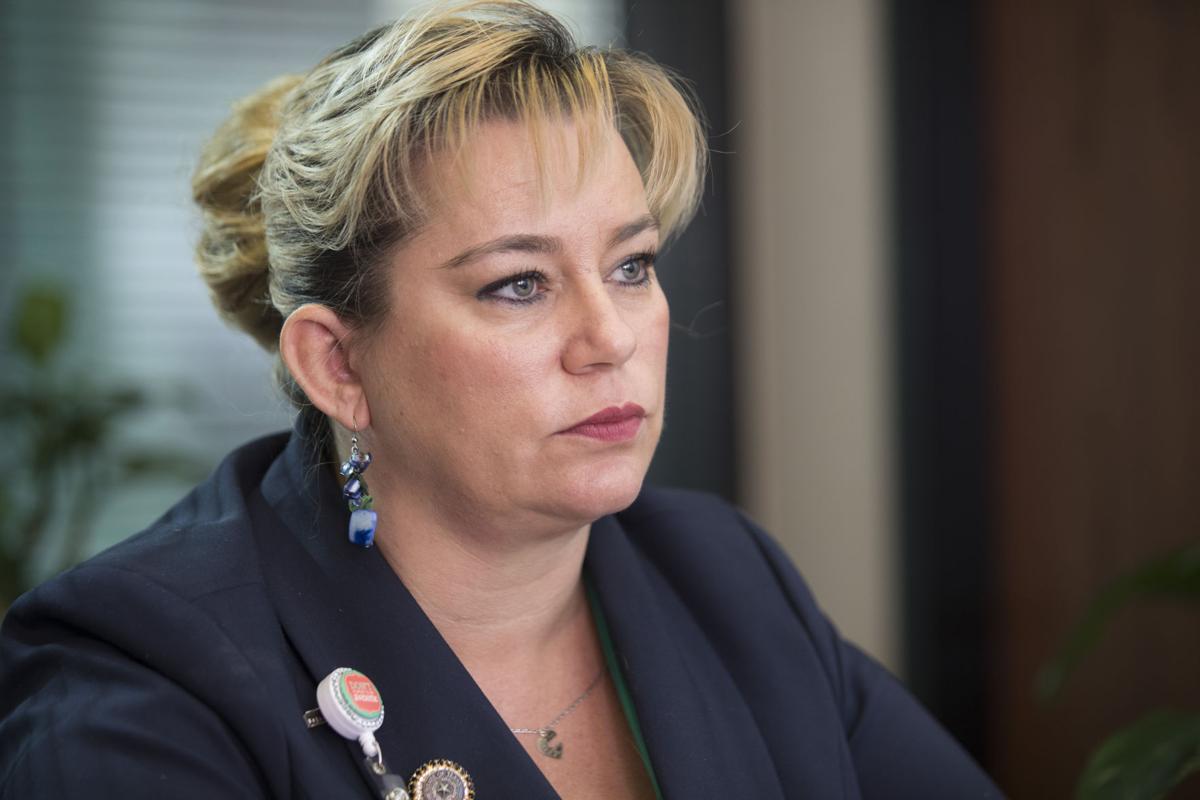 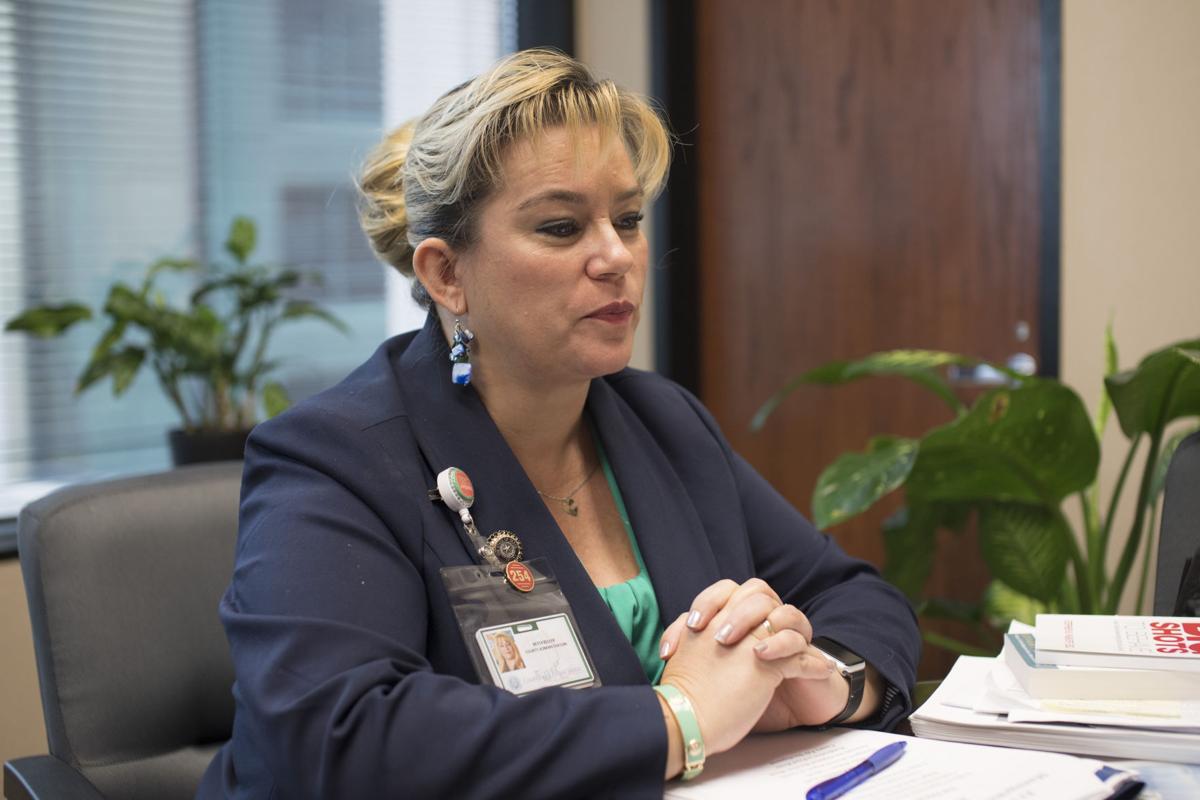 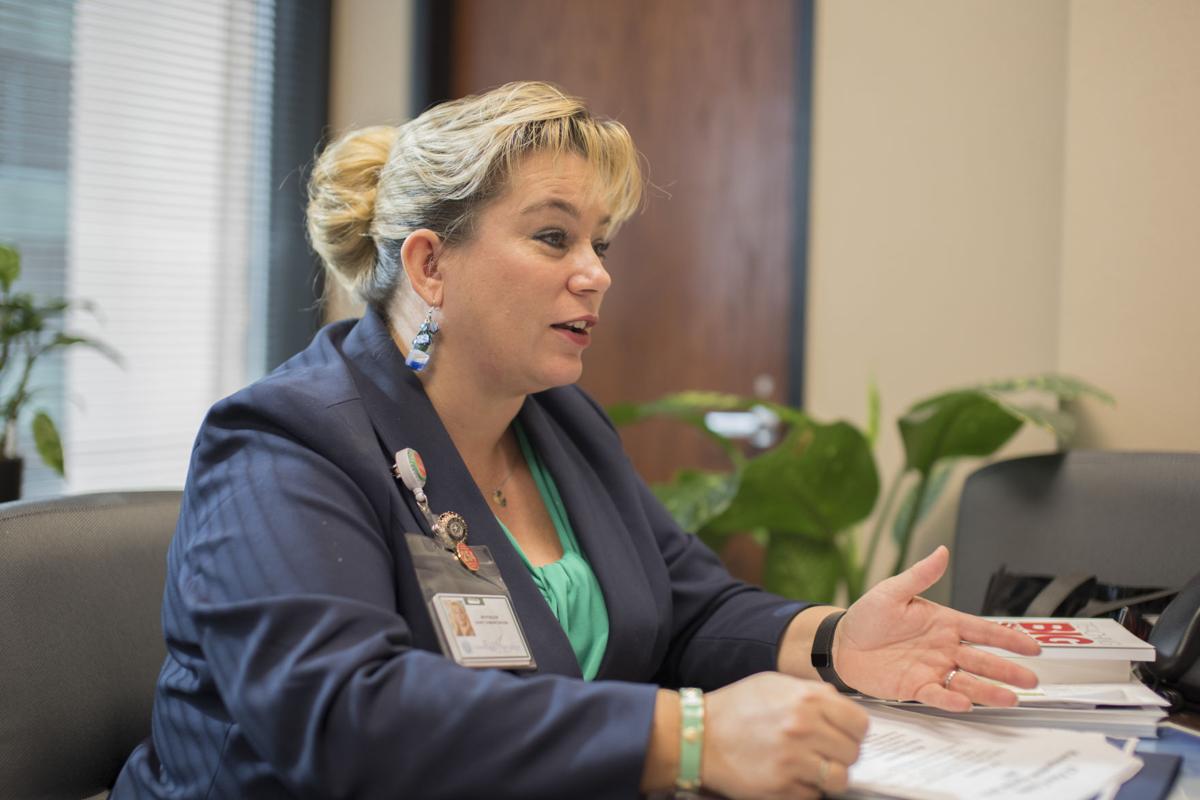 She is the county’s second administrator. The first, Steve Norwood, left in October 2015 after just nine months on the job.

Keller, his assistant administrator, was interim administrator for six months while the county conducted a national search. In April, she got the job and the $189,319 salary.

Keller joined the county as human resources director in 2008, coming from Alamogordo and bringing city experience and degrees in business administration and human resources. Now she says she’s learned all about county government, and this is where she wants to stay.

“I went through every Commissioners Court meeting and sat through budgets,” she said. “I was always at the table with them.

“I found that there was an unmet need for administrative-type tasks that often as HR director, I would go back and say we’ve got to do this. People would ask why and I’d say, ‘because someone needs to do it.’”

Her job is a lot like other county administrators in Texas – with little control over how elected officials run their departments. Beyond that, their duties vary widely, she said, tailored to the needs of each county.

In North Texas’ Collin County, for instance, all the elected officials are Republicans and county government is conservative, doing only what’s required by law. That means the courts, law enforcement, elections, indigent medical care and roads and bridges, but not much else.

El Paso County government, with a $347 million budget, is much broader than that, providing comprehensive medical care, a variety of family and indigent support services, parks, events and entertainment.

At her office in the County Courthouse, Keller sat down with El Paso Inc. to talk about minimum wage, housing prisoners, what she likes about public service and why the county is getting more urbanized all the time.

Q: Tell us a little about yourself and your career.

I started in public service at the city of Alamogordo in the city clerk’s office working elections, working with records and things like that. I fell in love with public service.

My husband works at the NASA site at the El Paso airport, and was driving back and forth every day. He was such a trooper. I decided to look for a job in El Paso. The one job I applied for was county human resources director. I got the job.

Q: A city manager typically has control over every city department. But only about 800 of the county’s 2,800 employees are under your purview. Which departments are under you and which are beyond your control?

All of the elected departments are beyond my control: constables, JPs, sheriff, tax office, county and district clerks, commissioners employees, all of the judges, auditors and purchasing, council of judges support staff.

Q: What got rolled into your department?

We pulled people out of the auditor’s department and created our own Budget Department. It’s separate and not in my department. There are multiple departments that existed before and report to me – medical examiner, public defender, domestic relations office, human resources, informational technology, budget and the criminal justice coordination department, which handles personal recognizance bonds.

We’re working with the jails to get prisoners released more quickly instead of having people who are not a threat to the public sit in jail at taxpayers’ expense. They are released on personal recognizance bond until their case is heard.

Q: What kinds of offenders get personal recognizance bonds?

All types, as long as they’re not involved in violence, and they have connections to the community.

Q: How long has the county been working on increasing the number of PR bonds and what has the impact been?

A little over a year. We have seen as many as 180 fewer people in jail a day. If you use an average of $80 a night as the cost, it amounts to significant savings to have people at home rather than in jail.

Q: You’ve been on the job for about a year. What changes have you been able to make or move along?

Implementing the court’s direction in a more effective manner. My role has been making what they want to happen – happen.

A re-entry program for inmates who are returning to the community and are most likely to end up back in our jail. We’re trying to be more proactive than reactive and asking what can we do to help offenders get back to being a contributing member of society, versus going back into the system.

Q: So you’re not just working with people in county jail, but with those who’ve been in prison?

Yes, these are the individuals who’ve been sent somewhere else and who have been in prison for two or more years. They’re much more likely to end up back in our county jail if they’re returning with no support network in their community.

We’re looking at what it would cost to implement those types of programs versus the cost of putting them in jail. This is a study we’re doing right now.

Q: From whom do you get your marching orders, Commissioners Court as a whole or the county judge and commissioners individually?

From the county commissioners as a whole. Sometimes a member of the court might call and ask what I think and I’ll give them my thoughts. But I don’t act until it’s a direction of Commissioners Court.

Addressing the community’s issues and doing it through a policy. One of the things I’ve been proud that Commissioners Court has done is once a year they get together and they plan. They prioritize their needs and say these are the things we want to look at and dedicate resources to.

It’s a better way to budget versus the way it was, depending on who’s most popular or whose idea was most popular.

Now the five of them sit down with a facilitator who really helps them focus and decide what they want to work on. They come up with a plan that gives us a lot of guidance and structure.

They want our budget to have more performance metrics and want to know what they’re getting, why we do it and what the value is to the community.

For example, we invested in new vehicles and created a fleet department. Before, we had mechanics and lots of vehicles. So we hired a fleet director. Now, we report back to commissioners what we have gotten for that money.

Our repair costs and fuel costs have gone down. We also invested in a GPS system to keep track of our vehicles, and the returns have more than paid for the system.

Q: Other directions from Commissioners Court that have started something new?

He was the city’s foreign trade zone manager. He is knowledgeable about the goods and trade and the industries that flow though El Paso.

It’s also important for us to develop Downtown and around the Mission Trail. So instead of waiting for what comes to us, which is what we get though our relationship with the city, we’ll now have a resource and a focus.

Q: Does Quinones have a department and staff?

He will. He has a few support staff and those positions he’ll be filling shortly.

Q: The county once had a planning and community development office. Will it be re-established?

Yes. Commissioners Court added a chief planner to the budget this year. Community infrastructure is an issue – things like roads and community services that some people consider niceties and others consider essential – like libraries, roads, sidewalks, transportation, transit services, bus stops.

Q: Minimum wage is a big issue in local government. County hospital workers are pushing for $15 an hour minimum. In San Antonio, county government has been looking at $13. Where is El Paso County?

Last year, Commissioners Court asked us to set a $10 minimum wage for our employees. We did that. It wasn’t difficult. We already were close. After last year’s across-the-board pay raise, we had a couple of positions that were below $10 an hour. So it was minimal for us to implement.

We still had some seasonal jobs, like lifeguards, that were below $10. This year we made sure we brought them up to $10 and a little bit over. Now, our lowest regular employee is a little bit over $11 an hour.

Q: The county has been looking at the expense of running the Downtown detention facility compared with the more modern jail on Montana for a long time. Where do things stand?

Commissioners Court believes we would be able to house all of our prisoners on Montana. We would need a station Downtown for temporary holding for prisoners going to trial.

Q: How many federal prisoners do you have now?

Q: What about city, county and state prisoners?

Q: Is the county really looking at dropping federal prisoners despite the money you’re paid for holding them?

But this is not an overnight thing. How do we do it in the way that’s best for the county?

Q: What kind of growth is the county seeing east of the city limits? Are there areas of concern?

We’re definitely seeing growth on the Eastside. One subdivision, Mission Ridge, is adding between 500 and 700 houses a year, and they’re planning to do that until they’ve added 10,000 to 12,000 homes. It’s a beautiful development.

Q: Are there problems? Is it up to the city’s standards to allow eventual annexation?

They’re nice developments. What I see is more infrastructure problems.

One neighborhood doesn’t have internet service. If you drove out there, you’d see these are nice, nice homes. You would never imagine there’s no internet. There’s nothing that tells you you’re in the county other than the color of the street signs.

Transportation is another issue – the amount of traffic because of these growing areas. We’re still working on connectivity.

We’re doing literally millions of dollars in road projects with vehicle registration funds to improve connectivity and mobility out there.

We have walking paths and sidewalks, median landscaping. It’s a more urbanized county than we have seen in the past.

Q: Are there other development issues?

All the infrastructure – storm water, trash service, parks and access to amenities that people expect. Some developers know this and are including things like parkland.