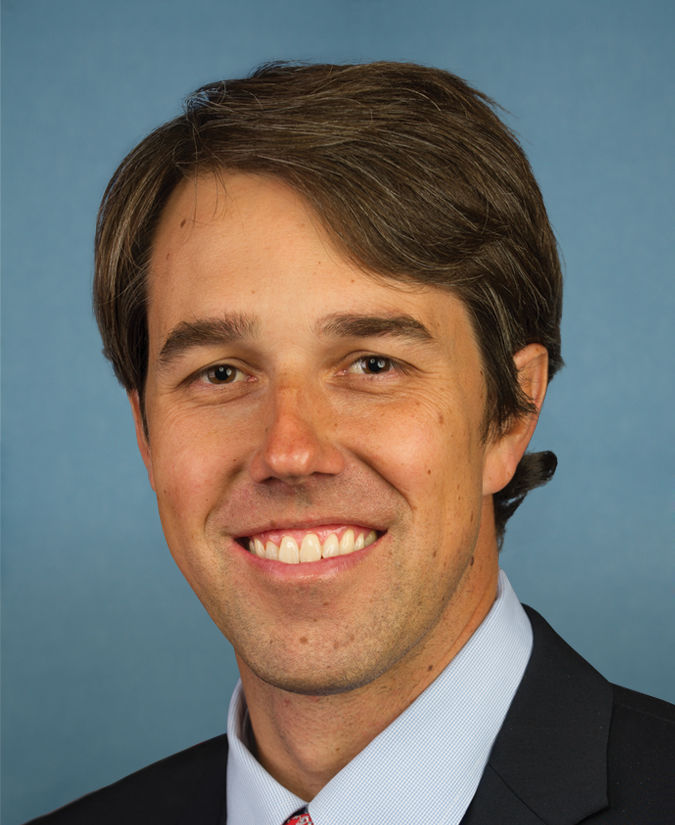 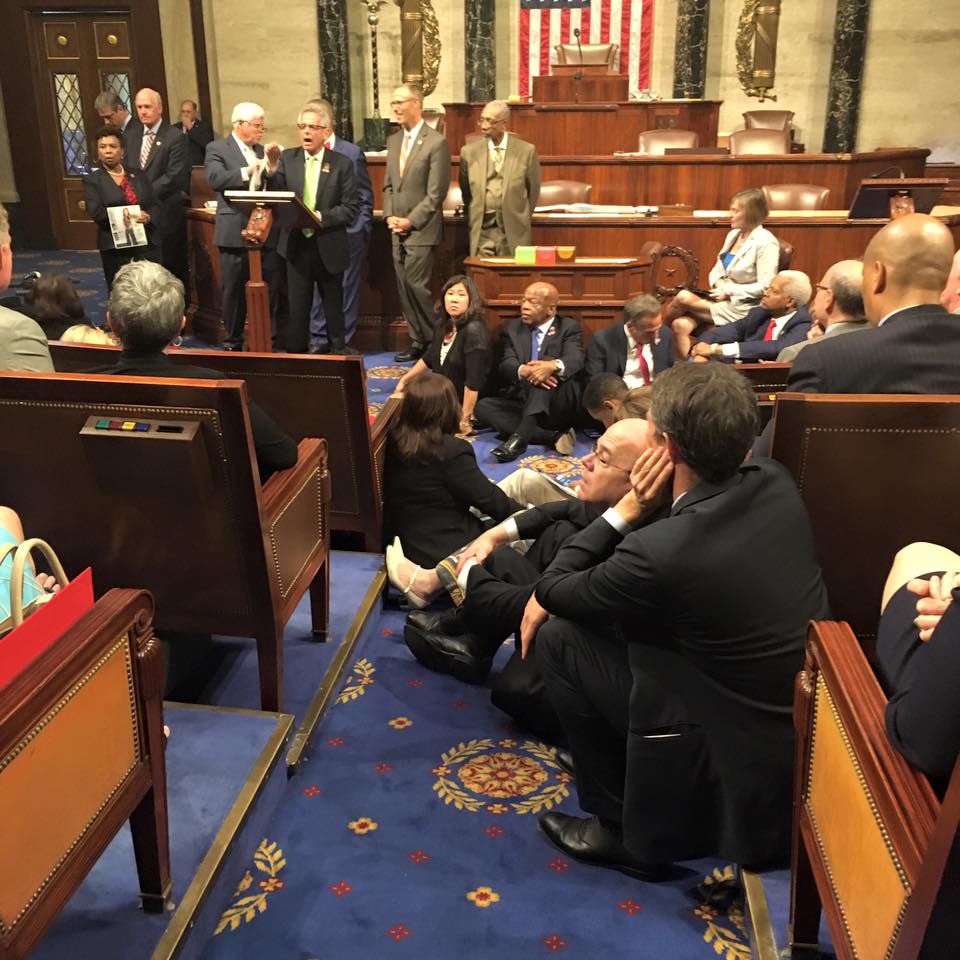 O’Rourke, right, on the House floor during the Democrat’s 26-hour sit-in over gun bills. 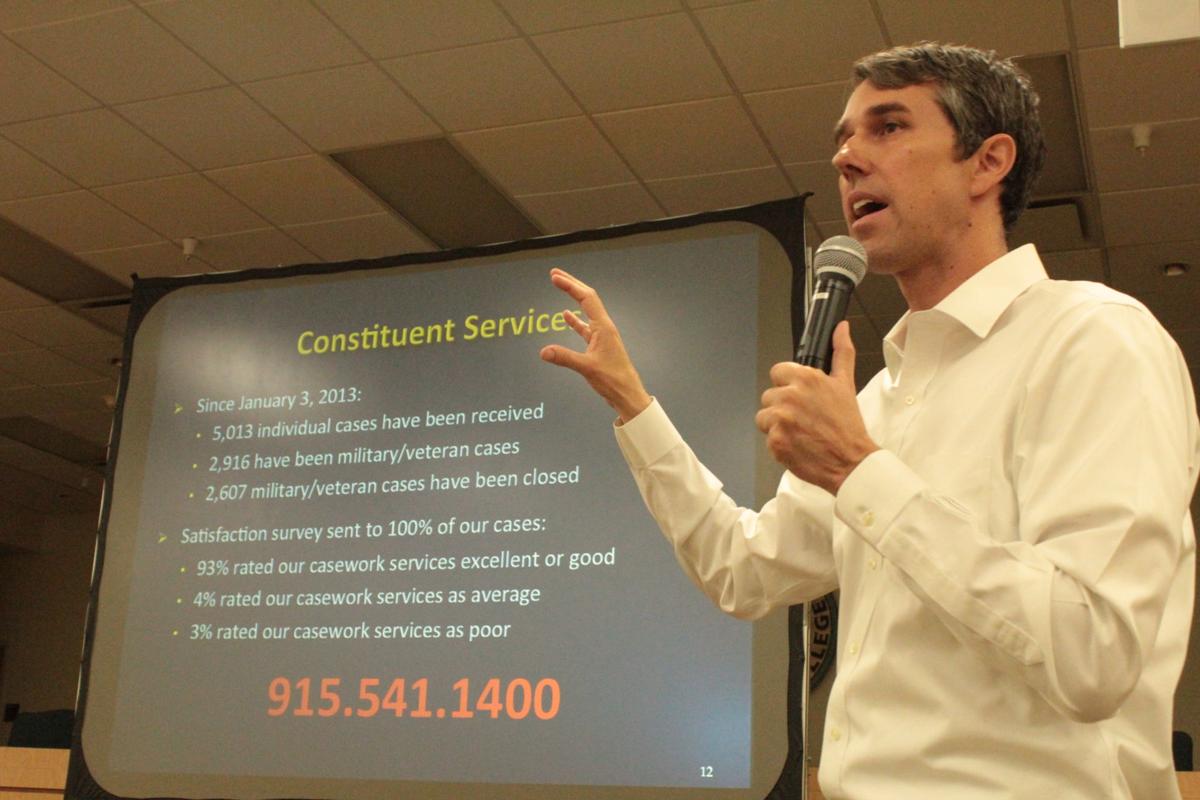 O’Rourke, right, on the House floor during the Democrat’s 26-hour sit-in over gun bills.

Rep. Beto O’Rourke, a Democrat and El Paso’s man on Capitol Hill, has never shied away from taking controversial stands.

As a member of the El Paso City Council, he called for debate over drug legalization and decriminalizing marijuana, and helped push through health benefits for domestic partners of city employees, leading to an unsuccessful effort to recall him.

As a first-term congressman, he voted against military action in the Middle East and criticized Israel’s treatment of Palestinians.

But even in a conservative Army town with a strong Jewish community, O’Rourke didn’t draw a strong challenger in his first re-election bid or now, in his second. He’s running unopposed in November for a third term.

After an African-American gunman shot 11 Dallas police officers during a July 7 Black Lives Matter march, killing five, O’Rourke joined other Democratic officials in speaking up for that organization and against El Paso’s black police chief, Greg Allen, for calling it a radical hate group.

Last week, current and retired police officers joined others in supporting Allen and blasting O’Rourke, County Judge Veronica Escobar and other officials for their criticism of the chief and their support of Black Lives Matter.

Allen explained that he was angry and emotional about the deaths of the Dallas officers when answering the question about Black Lives Matter, but he’s standing by his words.

So, too, is O’Rourke, who again called Allen’s description of Black Lives Matter “irresponsible” – even after watching the strong public and City Council support for Allen at Tuesday’s council meeting.

O’Rourke, 43, has made his mark in Congress and among veterans with his personal campaign to improve Veterans Administration services in El Paso and nationally.

He also caught some fame last month as he sat in with the small group of Democratic congressmen who took over the House floor for 26 hours. He used his iPhone to live stream their protest over the Republican leadership’s refusal to bring gun bills to a floor vote.

O’Rourke found time Tuesday – after shots fired near the U.S. Capitol led to a lockdown – for a telephone interview with El Paso Inc. about guns, the Middle East, Donald Trump’s politics and Hillary Clinton’s email.

Q: You’ve been in the headlines more than usual – most recently, over your comments regarding your loss of confidence in El Paso Police Chief Greg Allen after he called Black Lives Matter a radical hate group and the joint statement by you, County Judge Veronica Escobar and others.

You were criticized at City Council by people who said Allen is a cop’s cop, an African American himself, who’s kept El Paso the nation’s safest big city but was angry about the police who were shot and killed in Dallas.

Have you seen his response? What do you think he or City Council should do now?

I think I could do a better job in making this point, which is that my support of law enforcement is whole-hearted and proven during my time on City Council and my time as a member of Congress.

It is not incompatible with my criticism of the chief’s irresponsible comments about not just naming Black Lives Matter as a radical hate group, but also holding them in part responsible for the murder of five law enforcement officers in Dallas.

What message does that send to his officers about that group and what they represent? That they’re radical and a hate group and that they’re responsible for the death of other officers.

It’s also a poor reading of the facts. Black Lives Matter, I think, has a vital role to play in this country’s reassessment of police-civilian relationships, especially when it comes to the African-American community.

Much like other civil rights efforts throughout this country’s history, there are going to be some bad elements within those efforts.

There were violent elements connected to the civil rights movement for racial equality in the 1950s and ‘60s, yet the overall movement was critically important to this country’s progress, and so on.

Black Lives Matter and the vast majority of people in that movement, I think, are responding appropriately to a very serious problem in our country and should by no means be characterized by the actions of a deranged gunman in Dallas or by stupid things that some people chant at some protests and rallies.

Q: You were part of the Democrats’ 26-hour sit-in over gun legislation in June. What kind of legislation would you like to vote for?

I think closing all background check loopholes would be a great place to start. That is universally popular in this country amongst Republicans, Democrats and independents. It makes so much obvious sense that it’s hard to believe Congress has been unable to act on that. That goes to show you the power of the NRA.

I would like to see the Centers for Disease Control have the ability to study gun violence, which they are prohibited from doing today. That means lawmakers don’t have all of the information necessary to make the best-informed decisions.

That again shows Congress’ capture by a narrow interest group. Those are two common sense, bipartisan ideas that I think make perfect sense to start at.

Q: You went to Vietnam with President Obama in May. What would you say about the state of that nation today – a country where we spent 16 years fighting to keep it from becoming the nation it is today.

Vietnam is unbelievably pro-American. The president’s team told me those were the largest crowds they’ve ever seen welcoming the president in any country that he’s traveled to.

I think their relationship with China and the wars they have fought with that country going back 1,000 years to just 20 years ago are far more significant to them.

The United States is seen by them as a potential counterweight to China, a trading partner for Vietnam, a source of foreign direct investment.

For an autocratic, communist state, that is a major concession because we know by examples like Poland, those labor organizations become power centers independent of the communist rulers.

I think that goes to show how much Vietnam is willing to do and to change in order to further develop its friendship with the United States.

Q: Do you see any similarities between our involvement in the Vietnam War and the Middle East?

I see some similarities. In Syria last year, we started with 50 Special Forces and we’re now up to 300 – a six-fold increase. Our defense secretary just announced that we’re adding 560 troops to our presence in Iraq, which only had 4,000. That’s a significant addition as the percentage of our presence there.

I see a slow-building presence without a lot of oversight, without a declaration of war, a new authorization for the use of military force, without a clearly articulated strategy in terms of what our goals are and what constitutes victory or success.

Q: Sounds like you still have reservations about our military involvement over there.

I do, and I voted against this year’s defense bill in part because there is no clear oversight or check on our war in Iraq or our war in Syria, including a train-and-equip program that has not received the scrutiny or accountability necessary to protect American lives and ensure success.

When we’re not clear with ourselves, with the American people about what our goals are and what we’re willing to sacrifice to achieve them, then we are setting ourselves up for certain failure. That, to me, describes our approach to the Middle East.

It’s easy to criticize and hard to prescribe a solution, but I think that begins with some humility about whether it’s ours to solve and maybe we should rethink what our goals are in that region.

Q: This is a presidential election year like no other, it seems. What do you think the success of Donald Trump says about the state of this nation?

One of the things happening globally – and we see it in the United States – that is really concerning to me is this move to disengage from the rest of the world.

Obviously, we saw it with the United Kingdom voting to leave the European Union. You see it in Donald Trump’s comments about leaving NATO, the defining military partnership post World War II. You see it in all major presidential candidates rejecting free-trade agreements and many vowing to renegotiate existing ones or leave them altogether.

Nothing good can come of that. I think we learned in World War I and World War II that when we’re not connected and mutually dependent and working together, then we are more apt to settle differences and rivalries militarily.

The world order today that so many Americans seem dissatisfied with is, in many ways, the one we fought for in WWII and so many people sought to preserve in the wars that followed – Korea, Vietnam, the gulf wars and others.

If we don’t want the order that the United States has essentially set up and guaranteed with a military presence in over 140 countries around the world and free trade agreements with many countries, then what’s the alternative, and how is America successful in that alternative world order?

I can’t think of a more critical moment for the United States post-WWII than right now. The world is rethinking the world order under which it has operated for the last 70 years, and we can either show leadership or pull back and hope everything works out OK.

Q: You have endorsed Hillary Clinton for president. What about her email problems? Do they affect your view of her?

She showed exceptionally poor judgment in setting up a private server. I think the questions around that are legitimate. I think people have to take that into account when they’re making a decision about who to support in November.

She has acknowledged as much. I wish she would have done it more forcefully and much earlier. Does her poor judgment in this decision and the decisions around it outweigh what for me are far deeper concerns about the character and conduct of a Donald Trump? No.

Q: Closer to home, the new Beaumont Army Medical Center started out with a budget of $906 million and is now far behind schedule. What’s the latest and what’s the problem?

It concerns me very much that it is behind schedule.

When we talk to the Department of Defense about this, much of that delay is related to a work-site fatality and the ensuing investigation and the fact that the worksite was shut down for some period of time. I think there have also been some minor design changes.

We continue to stay on it, but from what I know, it is back on track and I believe it is to be completed and operational by July 2019.