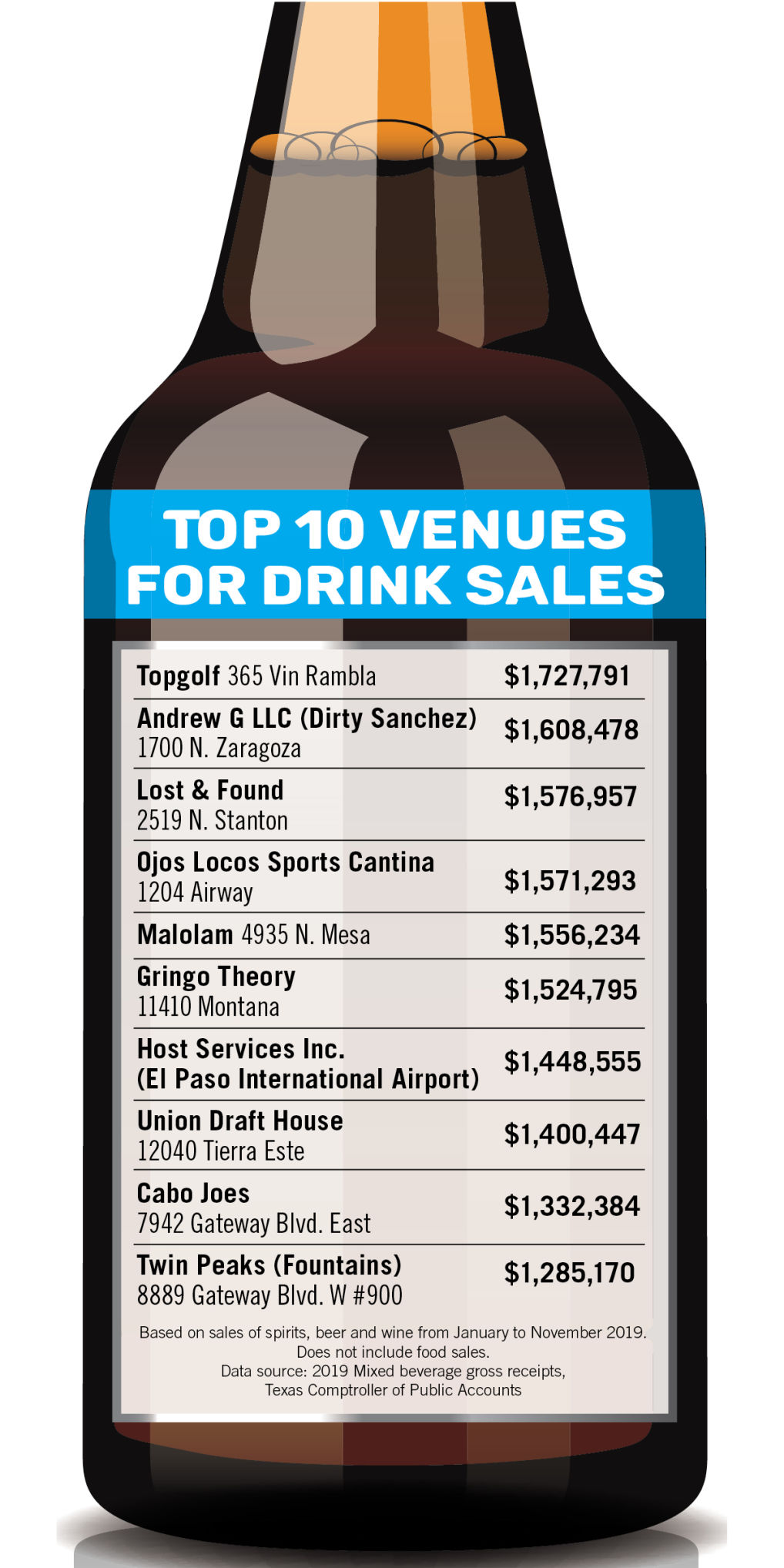 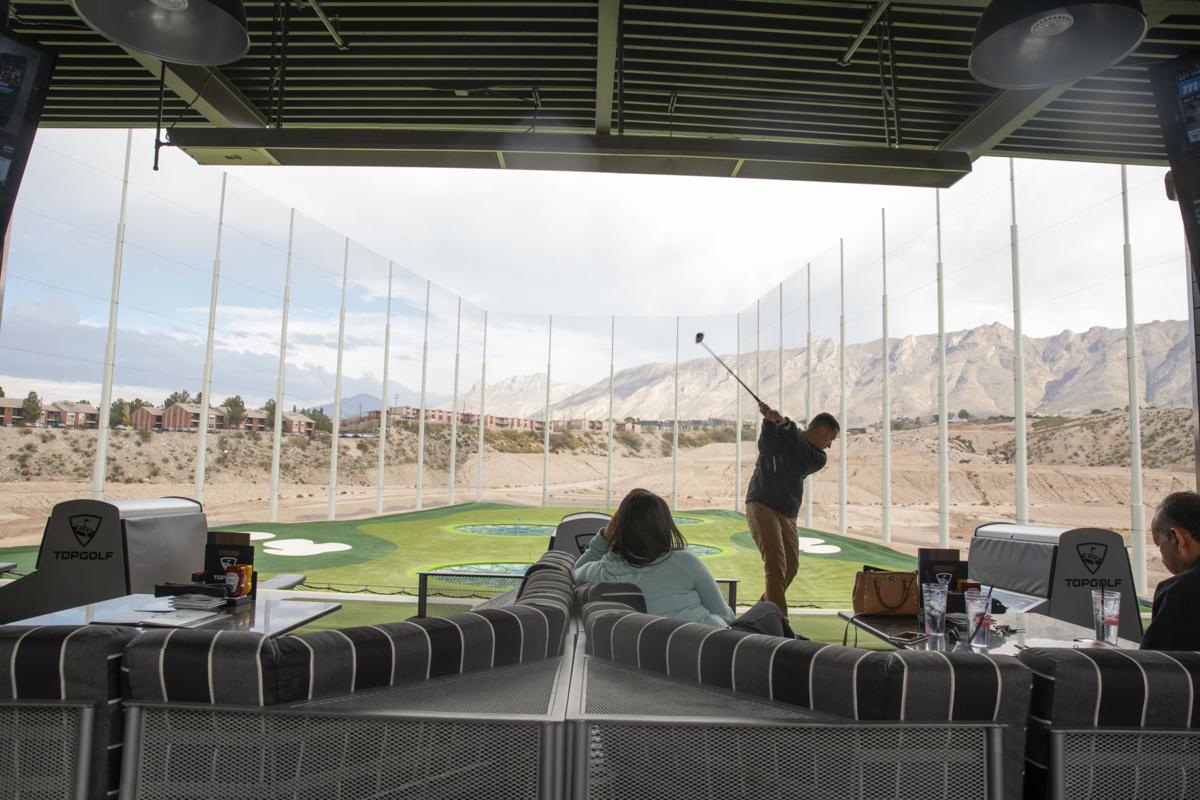 For the second year, Topgolf sold more in beer, wine and spirits than any other establishment in El Paso, state data show. 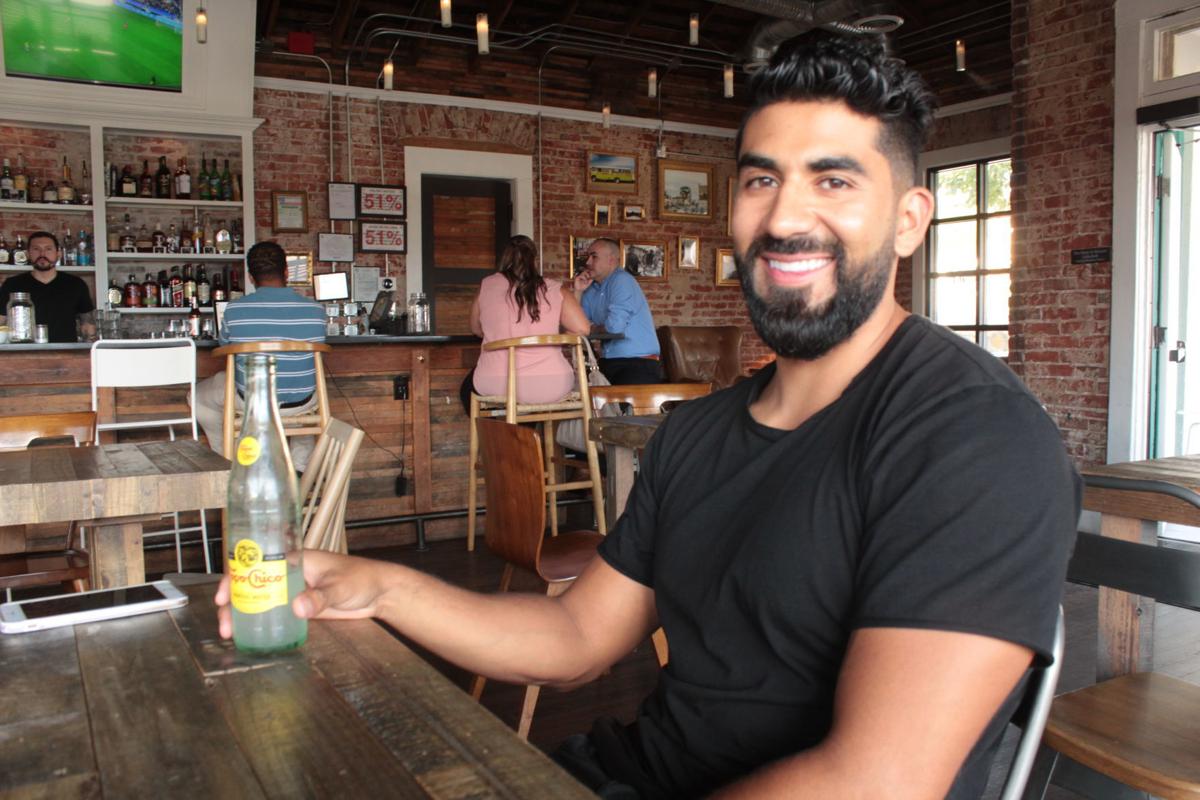 Johnny Escalante is co-owner of Later Later, above, and Lost & Found, a new bar that was one of the top-selling watering holes in 2019.

For the second year, Topgolf sold more in beer, wine and spirits than any other establishment in El Paso, state data show.

Johnny Escalante is co-owner of Later Later, above, and Lost & Found, a new bar that was one of the top-selling watering holes in 2019.

You can learn a lot by looking through the top-selling bars in El Paso County, including where the population growth is happening, where the most popular spots are and when El Pasoans are partying the most.

Local bars and restaurants paid a total of almost $131 million in beverage taxes to the state, according to an El Paso Inc. analysis of data compiled by the Texas Comptroller of Public Accounts.

For the second year in a row, the spot that made the most money selling alcohol was Topgolf, the indoor driving range complex on the Westside.

El Pasoans enjoy a boozy good time year-round, but May was the top-selling month for alcohol in the county.

The top-selling bars in El Paso County in 2019 are a mix of Westside and Eastside spots that have risen to the top, including places like Lost & Found, Malolam, Gringo Theory and the Union Draft House.

But there were several bars, mostly on the Eastside, that have serious staying power. Bars like Gringo Theory, Union Draft House and Cabo Joe’s have been among the top performers for years.

There was also a newcomer that quickly rose to the top. Lost & Found, which opened at 2519 Stanton in March, was the county’s top-selling bar in April, July and August.

Johnny Escalante, managing partner of Lost & Found, said he was happy to be in the top 10 list and is in good company.

“It’s been a great pleasure,” Escalante said. “It’s been very satisfactory to have people come to our places from out of town, visiting over the holidays, and give us a compliment that they didn’t expect this in El Paso.”

Escalante added that El Paso’s growth is creating more opportunities to elevate the experiences of customers across the city’s establishments.

“I feel like El Paso’s culture, it’s wow factor and coolness, is broadening,” he said. “I think it’s very exciting. For us to be in the same list with national chains like Topgolf goes to show that people are not only supporting local but creating it.”

Lost & Found, a converted house with a large outdoor patio, is around the corner from the Cincinnati Entertainment District.

The Cincinnati Entertainment District has remained a popular draw for partygoers for years and has recently undergone street and lighting transformations to make the area better suited for pedestrians.

The bars in the Cincinnati Entertainment District paid a combined total of about $3.7 million in mixed beverage tax in 2019.

The mixed beverage receipts data also show the places in El Paso that have fizzled over the years, despite efforts to revitalize and rebrand.

Union Plaza, in Downtown near the ballpark, was once home to several popular bars and a vibrant nightlife scene. There’s now just a handful of places left in the main Union Plaza area, even though newer venues like Deadbeach are popping up nearby.

The Union Plaza spots — Tabla, Club Here I Love You, Wallflower and Whiskey Blonde — paid a combined total of $376,549 in mixed beverage tax in 2019.

The property that housed Blackbird was bought by J&K Presents, which runs Later Later and Lost & Found. It will re-open under a different name and concept later this year.

Establishments are required to submit monthly reports and can be fined for noncompliance. The data does not include food sales.