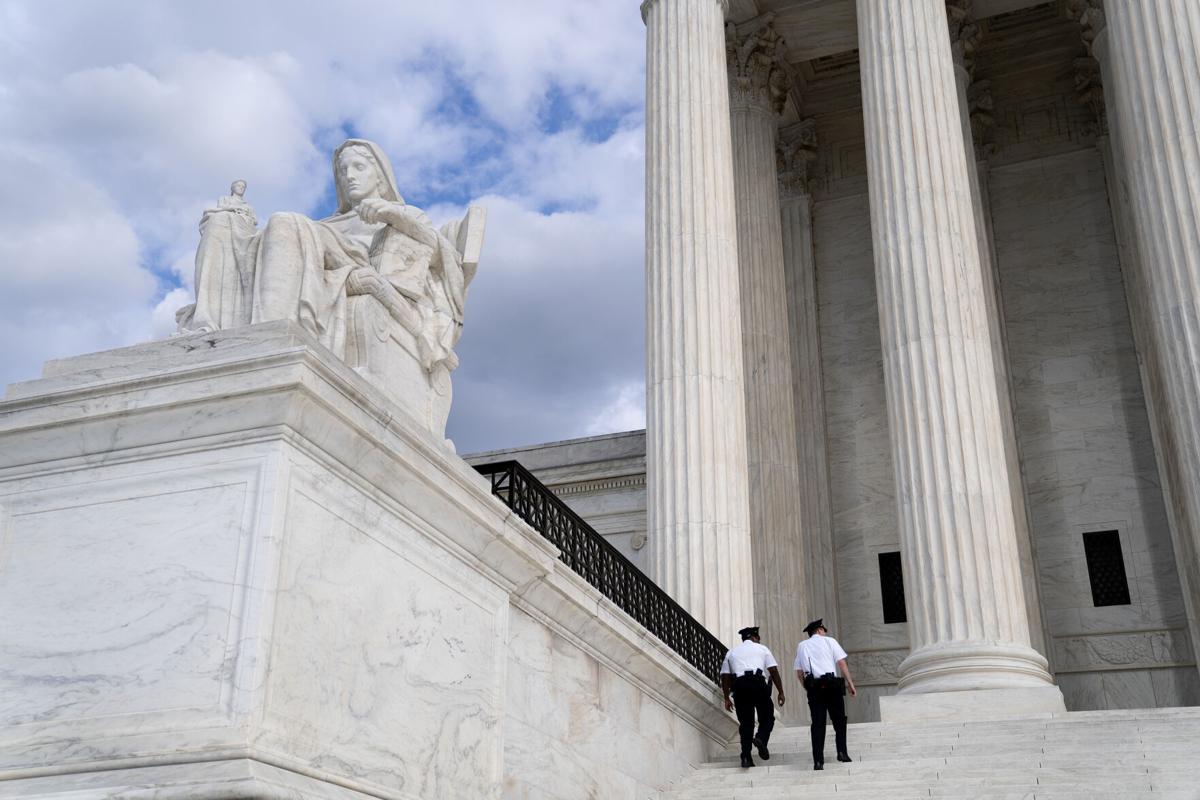 Police officers walk past the Contemplation of Justice statue outside the U.S. Supreme Court in Washington on Friday, Oct. 22. 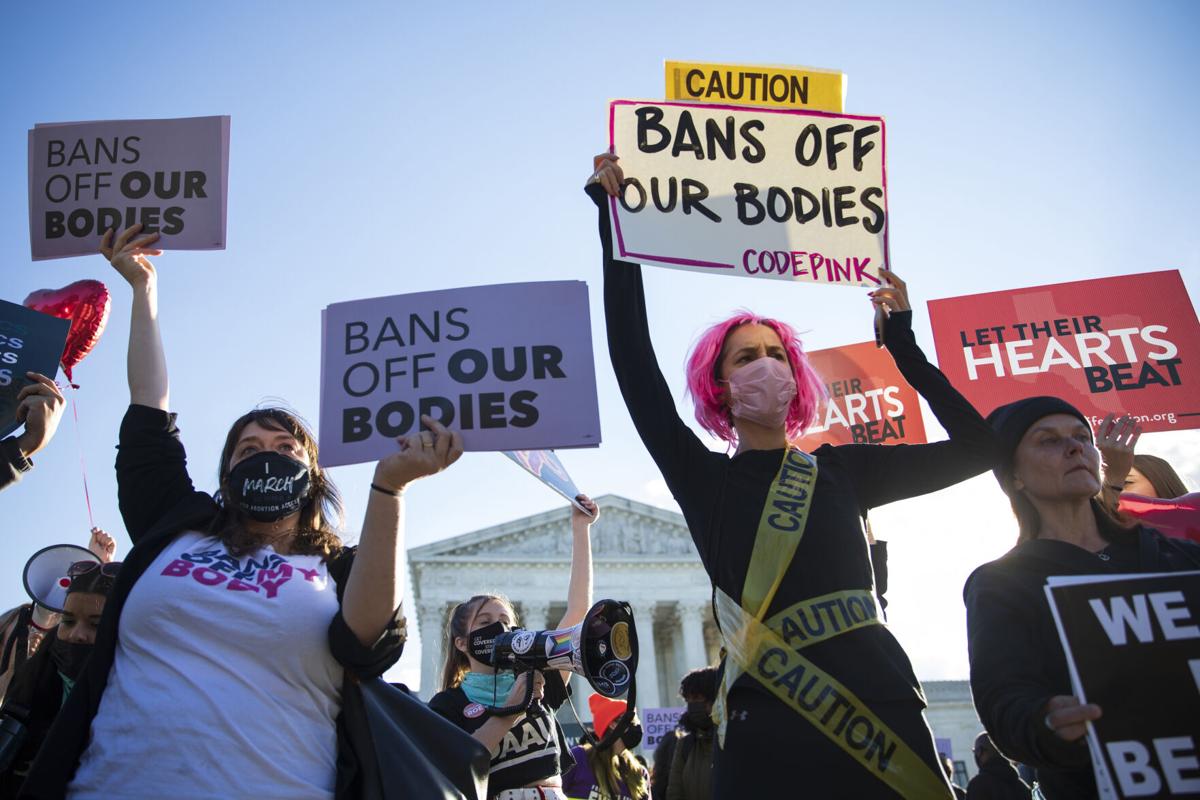 Abortion-rights, and anti-abortion protesters gather outside the Supreme Court on Capitol Hill in Washington, on Monday, Nov. 1.

WASHINGTON — The Supreme Court will hear arguments on Monday in challenges to a Texas law that has sharply curtailed abortions in the state.

The law, which went into effect on Sept. 1 after the court declined to block it in a bitterly divided 5-4 decision, was drafted to evade review in federal court, a goal the state has so far achieved. The law, which bans most abortions after about six weeks and includes no exceptions for pregnancies resulting from rape or incest, has caused clinics in the state to turn away most women seeking the procedure.

There is little question that the ban itself is unconstitutional under two key Supreme Court precedents, Roe v. Wade in 1973 and Planned Parenthood v. Casey in 1992. Those rulings prohibited states from barring abortions before fetal viability, or about 23 weeks.

The question for the justices is whether abortion providers and the Biden administration are entitled to challenge the law in federal court. Officials in Texas say the novel structure of the law, known as Senate Bill 8, forbids such challenges.

The law bars state officials from enforcing it and instead deputizes private individuals to sue anyone who performs the procedure or “aids and abets” it.

That makes it hard for challengers to know whom to sue, as lawsuits seeking to block laws as unconstitutional typically name as defendants the officials charged with enforcing them. When the providers filed suit in federal court, they named, among others, every state trial court judge and county court clerk in Texas.

While it may be hard to sue to challenge the law itself, the law allows private citizens to file suits in state courts against doctors, staff members at clinics, counselors, people who help pay for the procedure and even drivers who take a patient to a clinic. Such plaintiffs, who do not need to live in Texas, have any connection to the abortion or show any injury from it, are entitled to at least $10,000 and their legal fees if they win. Prevailing defendants are not entitled to legal fees.

Officials in Texas said the procedurally proper way for abortion providers to challenge the law was to violate it, be sued and raise the unconstitutionality of the law as a defense. But a victory for a provider in such a case would set no general precedent unless the plaintiff decided to appeal and lost before the Texas Supreme Court or the U.S. Supreme Court.

In a brief filed on Friday, the abortion providers wrote that “the threat of being haled into these rigged, coercive and duplicative proceedings is a core part of the harm that SB 8 imposes,” calling the legal process created by the law “constitutional Whac-a-Mole.”

When the Supreme Court last considered the law, in response to an emergency application filed by abortion providers, a five-justice majority refused to block it in a one-paragraph, unsigned order issued just before midnight on Sept. 1.

“The applicants now before us have raised serious questions regarding the constitutionality of the Texas law at issue,” the order said. “But their application also presents complex and novel antecedent procedural questions on which they have not carried their burden. For example, federal courts enjoy the power to enjoin individuals tasked with enforcing laws, not the laws themselves.”

The majority seemed to invite other kinds of challenges. “This order is not based on any conclusion about the constitutionality of Texas’ law, and in no way limits other procedurally proper challenges to the Texas law, including in Texas state courts,” it said.

Suits brought by the federal government do not face the same procedural hurdles as ones brought by private parties, and one question for the justices on Monday is whether the Biden administration can do what the Sept. 1 order said the abortion providers could not.

“The statutory scheme before the court is not only unusual, but unprecedented,” he wrote. “The legislature has imposed a prohibition on abortions after roughly six weeks, and then essentially delegated enforcement of that prohibition to the populace at large. The desired consequence appears to be to insulate the state from responsibility for implementing and enforcing the regulatory regime.”

“Although the court does not address the constitutionality of this law,” he added, “it can of course promptly do so when that question is properly presented.”

When the court agreed to hear appeals in two cases — Whole Woman’s Health v. Jackson, No. 21-463, and United States v. Texas, No. 21-588 — it put them on an exceptionally fast track. But the court said it would decide only the procedural questions of who is entitled to sue, not the constitutional one of whether the law violates precedents guaranteeing a right to abortion until fetal viability.

In December, the justices will hear arguments in a separate case, Dobbs v. Jackson Women’s Health Organization, No. 19-1392, which takes on a Mississippi law that bans abortions after 15 weeks. That case is a direct challenge to the constitutional right to abortion.