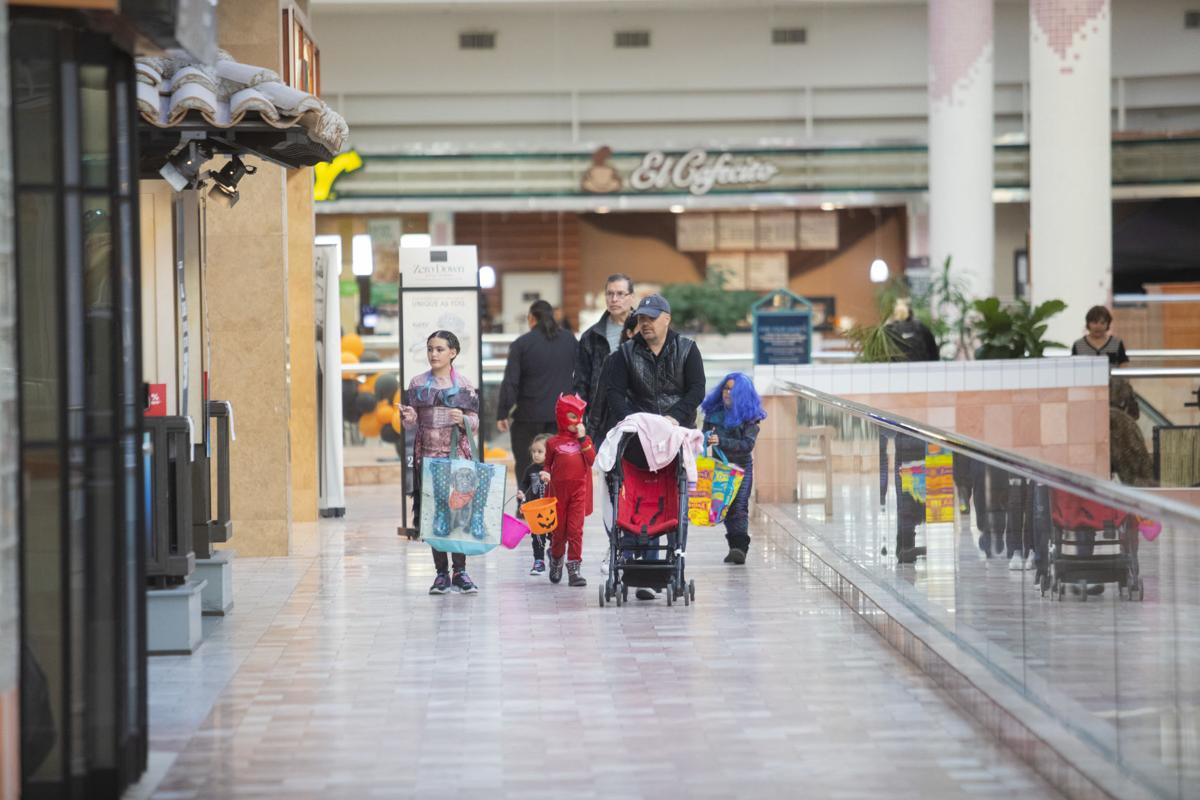 Families attending “Boos & Brews” at Sunland Park Mall trick or treat at the event as a part o the shopping center’s revitalization effort. 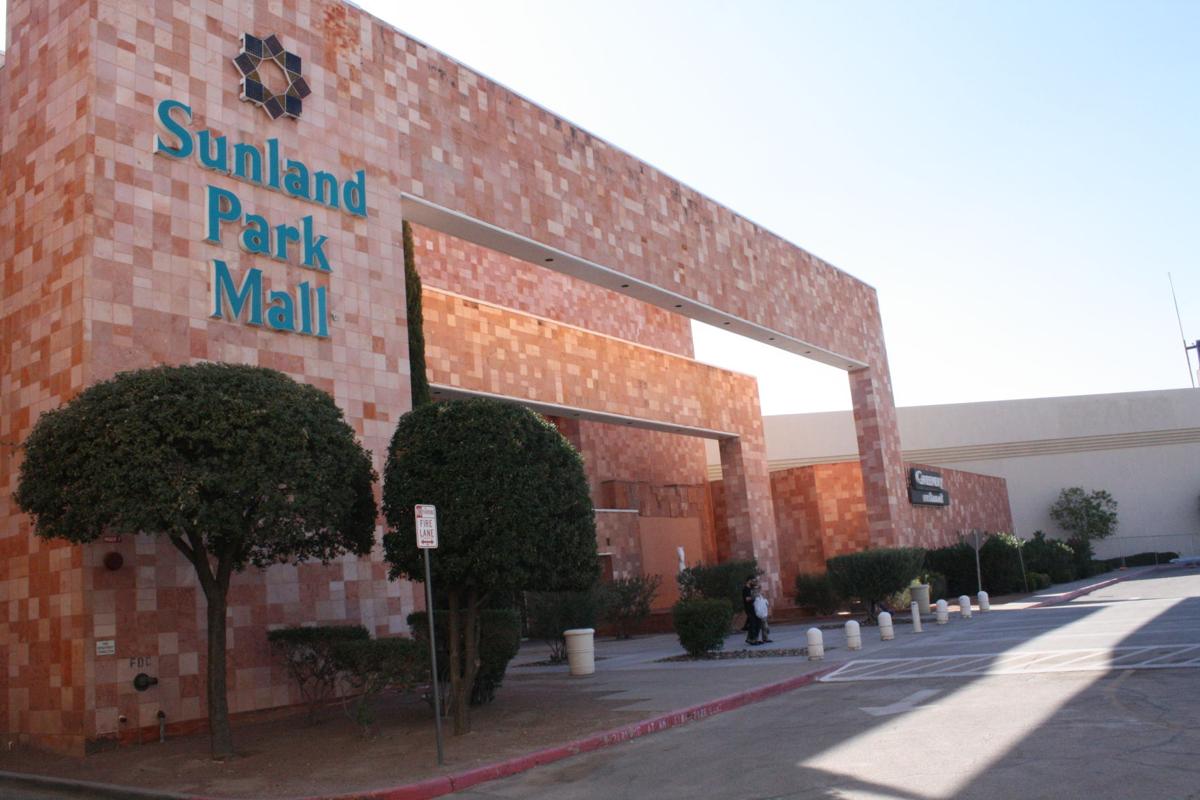 The million-square-foot shopping palace, with its pink exterior and shiny marble floors, was built by Simon Property Group in 1988. 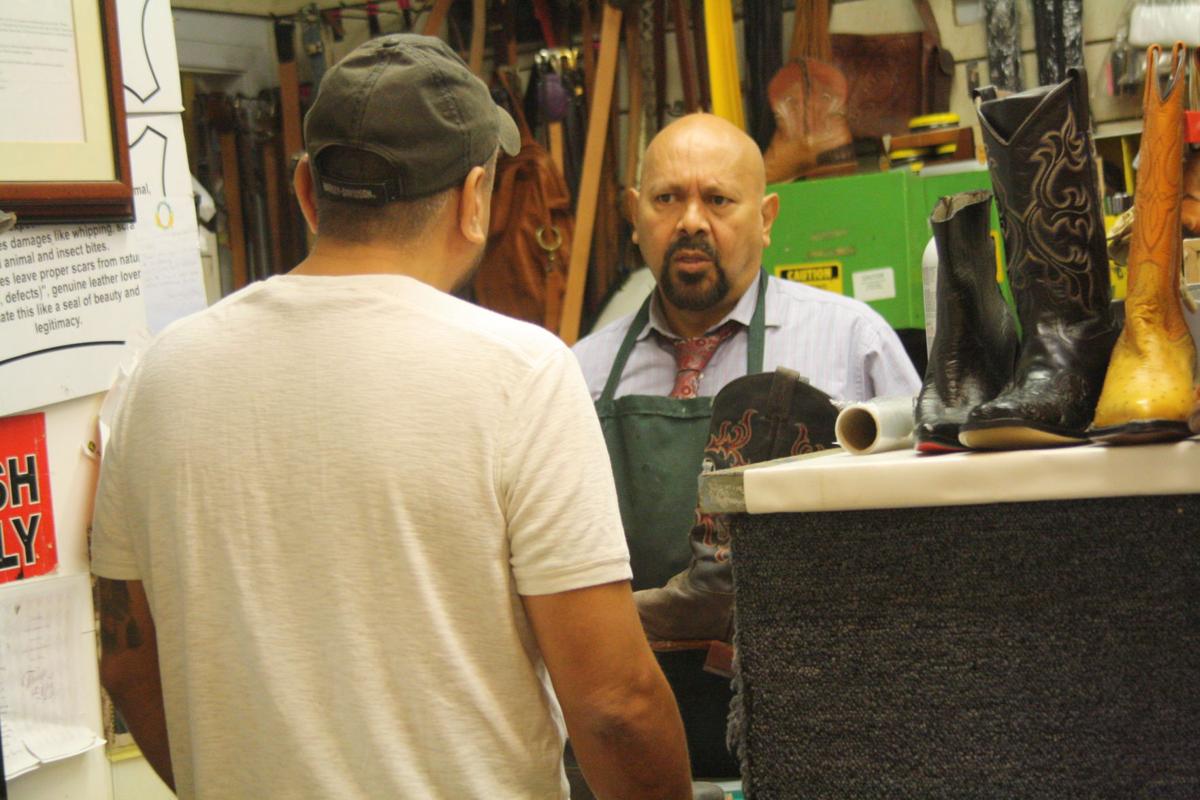 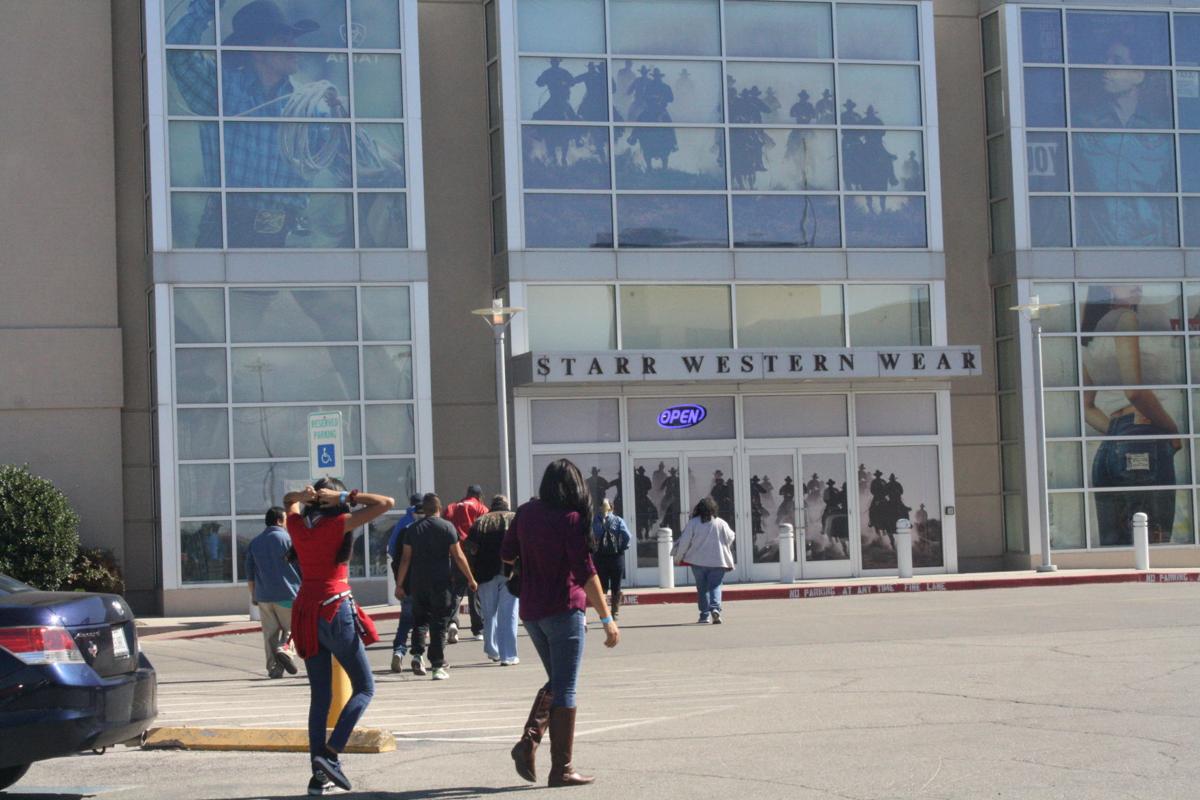 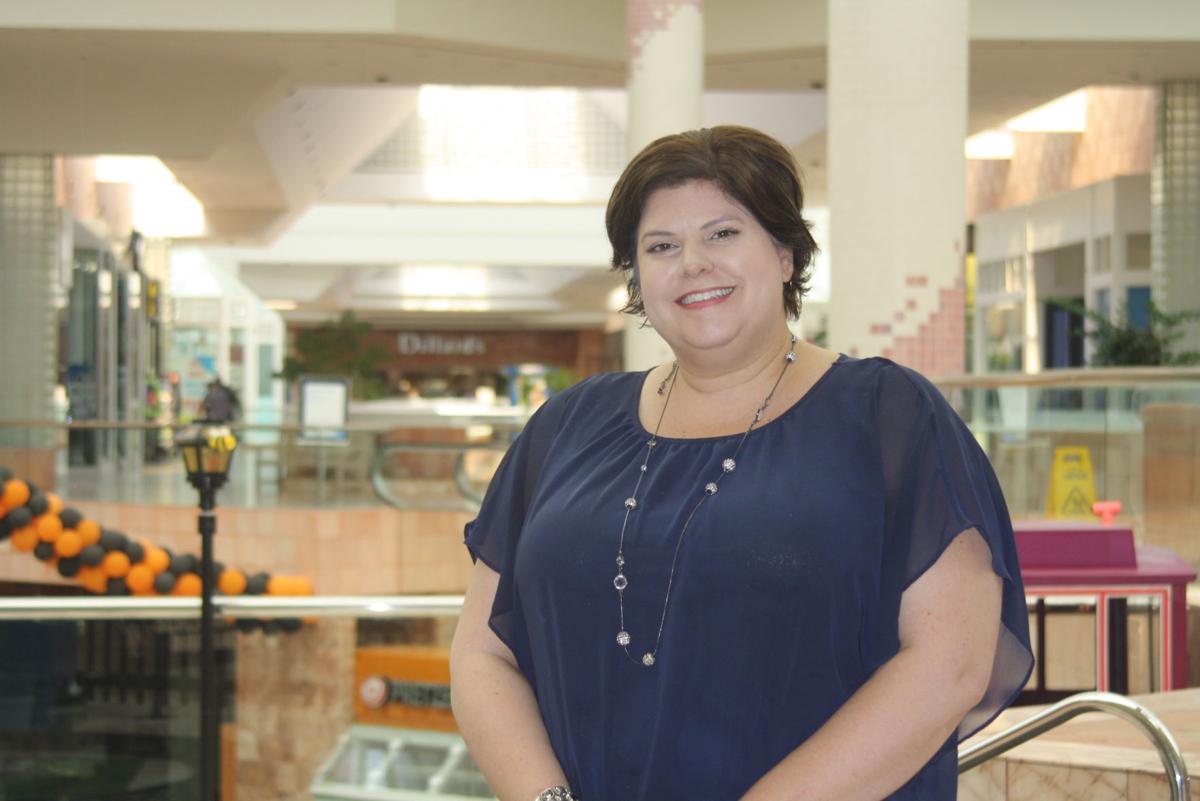 Kelley Baker, who has been general manager of Sunland Park Mall since February, says they are not redeveloping the mall but are making small incremental changes that are having an impact.

Families attending “Boos & Brews” at Sunland Park Mall trick or treat at the event as a part o the shopping center’s revitalization effort.

The million-square-foot shopping palace, with its pink exterior and shiny marble floors, was built by Simon Property Group in 1988.

Kelley Baker, who has been general manager of Sunland Park Mall since February, says they are not redeveloping the mall but are making small incremental changes that are having an impact.

The loss of major anchor stores at Sunland Park Mall, Sears being the latest, has left El Paso Westsiders who love their mall wondering and worried about its future.

And the arrival of 10 locally owned stores, eight restaurants, several office tenants and a new general manager since February shows the 31-year-old mall is headed in a new direction – several actually.

“It seems they’re doing something to reinvigorate it,” a military retiree named Rudy said as he headed into the mall Thursday morning for his ritual laps before the stores opened.

Sunland Park Mall is still the beautiful place it was in the 1980s, with its pink exterior and marble floors that shine under skylights that brighten the common areas of the million-square-foot shopping palace.

Just to make the place a little friendlier for the walking crowd and customers alike, they’ll soon let them bring their dogs along, said the mall’s 44-year-old general manager, Kelley Baker.

“You just have to make a few arrangements, like potty pads and things for accidents and there will be clean-up stations,” she said. “This staff is very attuned to what the public is looking for.

“We already have a lot of service animals come in, and we love that. We also do photos with pets.”

Built by Simon Property Group in 1988, Sunland Park Mall was among the shopping centers and smaller malls that Simon moved to a subsidiary, Washington Prime, in 2014 and then spun off as an independent, publicly traded company.

“What I love is that the company is putting money into this center to create what is now the trend,” Baker said.

“We’re not redeveloping the mall, but we are making small incremental changes,” Baker added.

“Like the space that’s going to be our book nook where you can bring a book or borrow a book and read. It’s going to be furnished like a living room and quiet.”

The aim is to make the mall a friendly place to hang out for teenagers and families alike.

“We have a public area that we’re turning into a free movie theater for children that’s going to feature Saturday morning cartoons with a breakfast cereal bar, and we’re doing a Thursday night movie series for families,” she said. “This mall is in the middle of a renaissance.

“We’re looking at our tenant blend and trying to create a really good mix of tenants that will thrive here.”

Now that Sears has finished moving out, True Fit Gym will be moving into the first floor near the mall’s main entrance and Conn’s Furniture will take the second floor – both in the first quarter of 2020.

As for the persistent whisper that Costco is finally coming to the Westside, Baker said it would be awesome, but the rumor is as false as it is prevalent.

Last January’s loss of Chick-fil-A capped off the restaurant exodus from the mall’s food court. But in the past eight months, it’s filled back up with local restaurants that include two and, soon, three food truckers that have come inside.

Two Brothers’ James Perez said he and brother in spirit, Mark Brammer, were planning to move their food truck operation to a location near Bob O’s on the Westside when he and his wife made a trip to Sunland Park one day.

“I hadn’t given the mall a thought,” Perez said. “But my daughter tapped my back and said, ‘Heavy D’s is here!’

“I’m, like, the food truck? I didn’t know they were starting to open places in here. So I started sitting in the seating area for a few days, just randomly watching the foot traffic.”

One thing led to another, and the two guys switched from the Mexican food fare they made on their food truck and opened a barbecue and wings restaurant in the mall Oct. 1.

Baker added, “We’ve all gained a little weight with Two Brothers being here.”

While Sunland Park is always working to fill the empty store spaces, Baker said, they’re getting a lot of help.

“We’re really focused on growth over the next few months,” she said. “It takes a while to turn everything around. But it’s been awesome to see our tenants bringing in other tenants.”

An example is the Ezkenda clothing store that just expanded to the mall and did so well that it helped bring in Screaming Eagle Marshall Arts.

But there are still sad closings, including that of longtime tenant Dressbarn. The 52-year-old company announced in May that 650 Dressbarn stores will close this year.

It’s a tough time for U.S. retail, and nearly 6,000 stores are expected to close by year’s end.

Sunland Park’s Dressbarn is set to close Dec. 26, and Josie Perez, 75, who has worked part-time at the El Paso stores that once numbered four and are now down to two, will be out of a job for the first time in 15 years.

But Shoe Doctor’s owner Victor Navarro, 62, who has been replacing soles and heels on shoes and boots for 25 years, isn’t going anywhere and is happy to see the mall hanging on so he can carry on an age-old trade that’s all but lost today.

“If they don’t close the mall, I have a lot of customers,” he said. “I must be doing something good because they keep coming back.”

“It would kill this mall if they pull out,” he said.

In August 2018, he opened a sprawling new store at Sunland Park, taking the building that Macy’s Department Store left the year before when it closed 67 of its stores nationally.

“We’re very pleased with the store,” Kimmelman said. “Our traffic patterns might not be typical for a regular department store, but we have a very good early and late evening business.

“We’re selling a lot of work wear and denim product, and those consumers tend to come in probably after or before normal hours.”

He said he’s definitely pleased with the job the mall’s management is doing to make the place more of a destination entertainment and shopping venue.

“That’s critical to the success of the mall,” Kimmelman said. “The entertainment component provides people with an extra-curricular activity, and they can shop at the same time.

“The good thing is that the mall is being creative, very flexible and putting lots of effort and emphasis on trying things essential to pick up the traffic.”