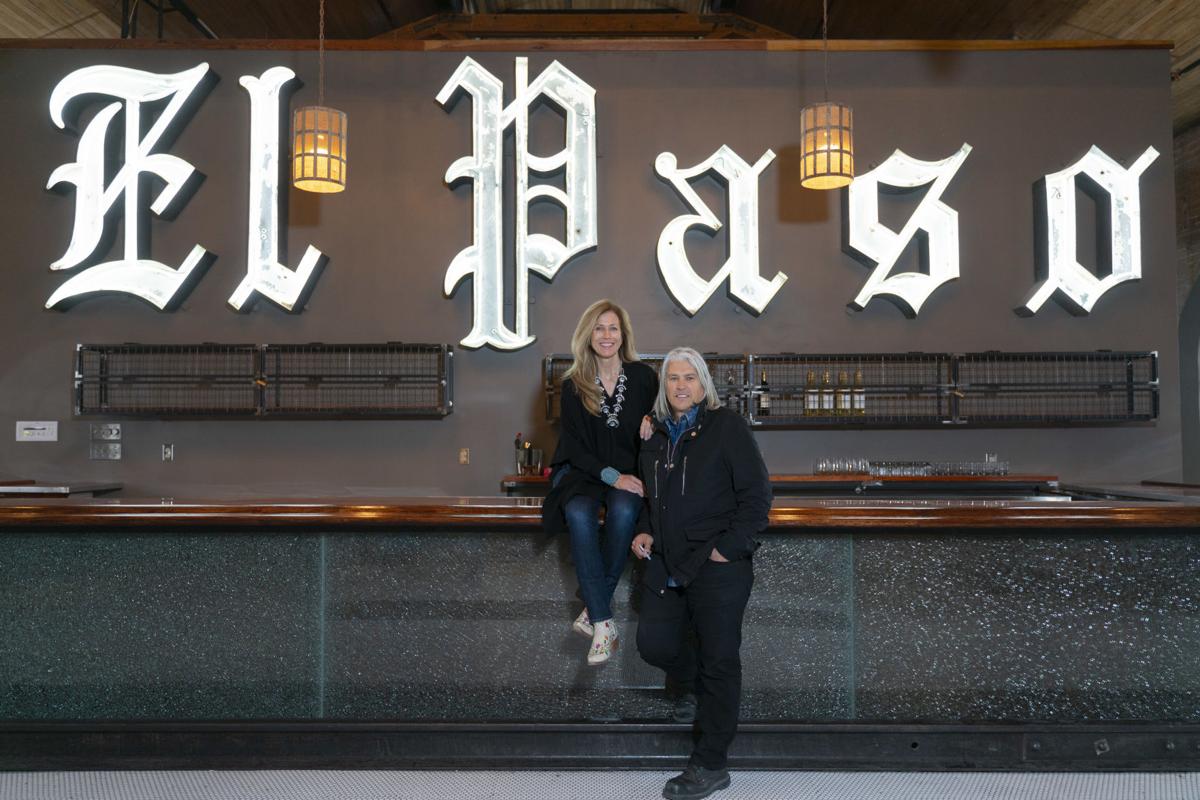 Isha and Steve Santamaria in the historic St. Rogers Depot, which they have renovated and turned into an events venue. The ‘El Paso’ sign once stood atop the former El Paso Times building. They are also involved in other projects they recently bought into, including The Tap in Downtown and the the historic site of Hart’s Mill and old Fort Bliss. 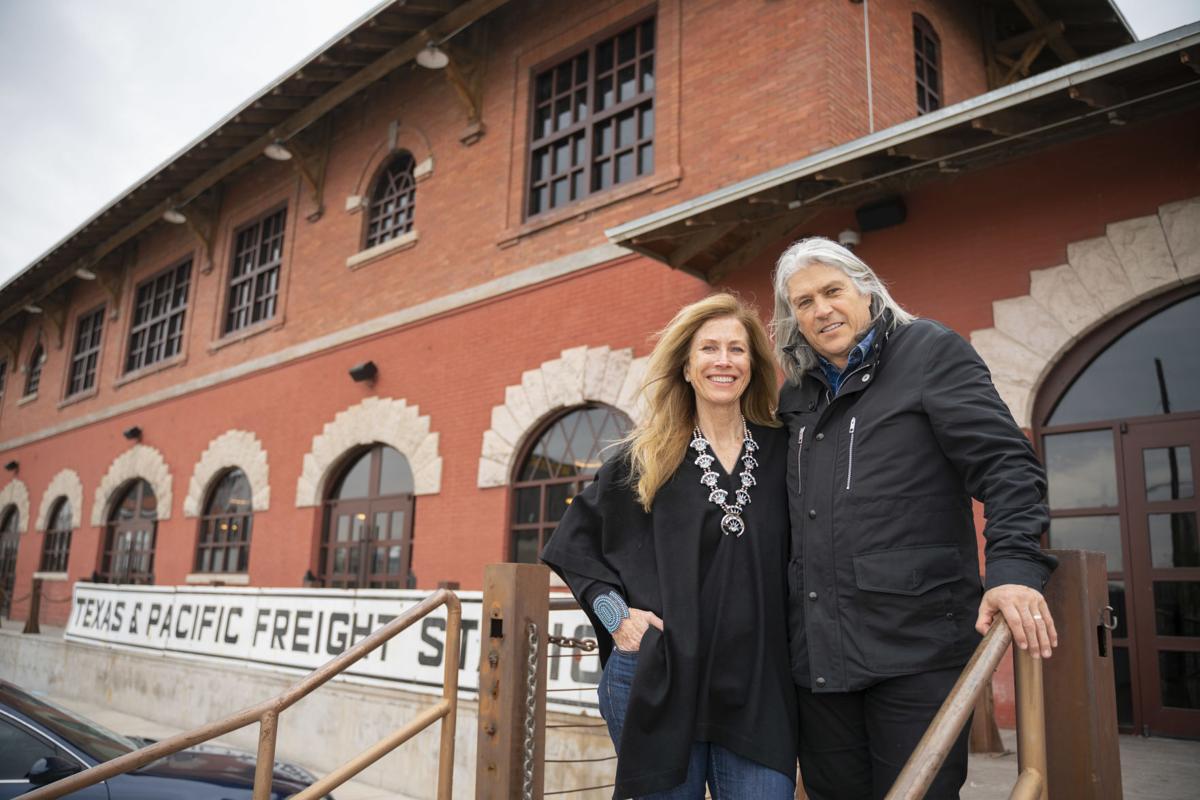 Isha and Steve Santamaria stand outside of the historic depot at 420 Campbell where they were married on April 20 at 4:20 p.m. 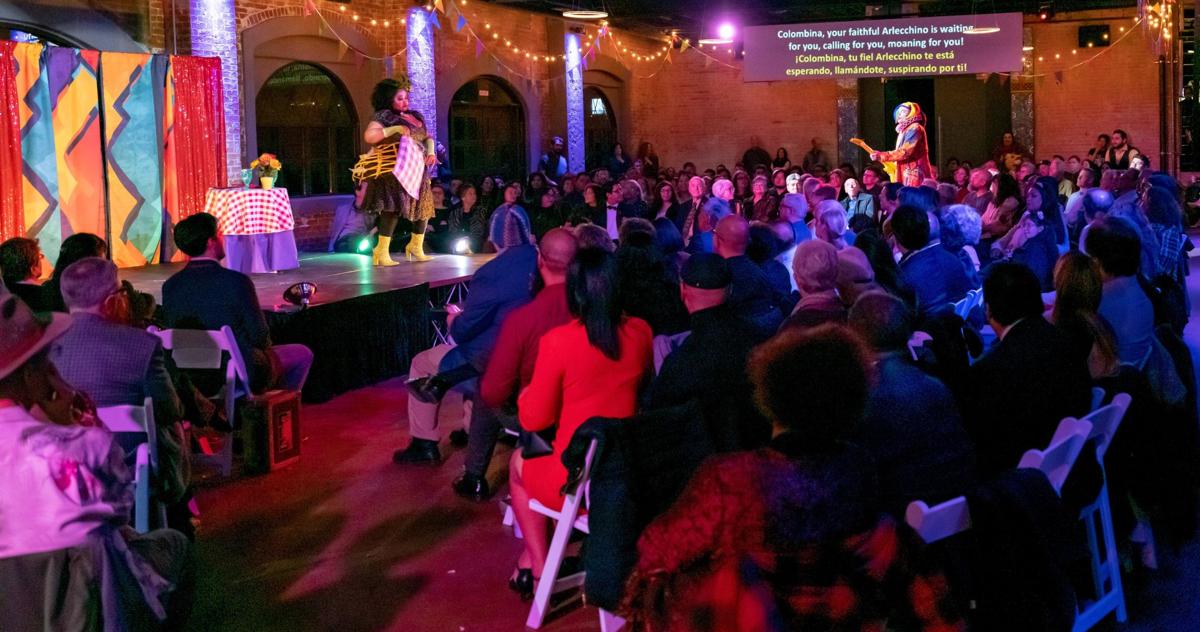 El Paso Opera opened its season earlier this month with Pagliacci at the St. Rogers Depot.

Isha and Steve Santamaria in the historic St. Rogers Depot, which they have renovated and turned into an events venue. The ‘El Paso’ sign once stood atop the former El Paso Times building. They are also involved in other projects they recently bought into, including The Tap in Downtown and the the historic site of Hart’s Mill and old Fort Bliss.

Isha and Steve Santamaria stand outside of the historic depot at 420 Campbell where they were married on April 20 at 4:20 p.m.

El Paso Opera opened its season earlier this month with Pagliacci at the St. Rogers Depot.

After moving back to El Paso from Denver five years ago, Steve Santamaria hadn’t been back in town long before he noticed the dilapidated, century-old depot at 420 Campbell next to Interstate-10 and fell in love.

It wasn’t just the building, he said, it was the address – 420, or April 20, which was not only his birthday but also the day he met his wife to be, Isha Rogers, the daughter of former El Paso Mayor Jonathan Rogers.

She told El Paso Inc. the story last week while they were returning to El Paso by train after spending several days with J.P. Bryan. The trip included a tour of the historic Gage Hotel in Marathon, which the retired Texas businessman renovated years ago.

“When Steve was trying to find something to do in El Paso, he would drive around town and look at buildings,” she said. “One day, he took me to the depot and pointed at the address and said this is going to be ours someday.”

They were married there last year on April 20 at precisely 4:20 in the afternoon.

By then, the depot project was already a part of their lives after they had outbid everyone at a dramatic courthouse bankruptcy auction in 2017 that turned into a showdown with the previous owner, Billy Abraham.

The partially restored building, renamed the St. Rogers Depot, had its debut as a new El Paso venue last weekend when it staged two season-opening, sold-out performances of Pagliacci by the El Paso Opera.

Not long ago, it provided a nesting place for pigeons and a roof for homeless folks who slept there and kept themselves warm by starting fires on the floor.

Built in 1903 by Phelps Dodge as a freight depot for the El Paso & Southwestern Railroad, the Italianate-style depot is the work of famed architect Daniel Burnham, who designed Washington, D.C.’s grand Union Station, as well as Union Depot in El Paso.

In 2006, the freight depot was on Preservation Texas’ list of Most Endangered Places.

Now, Santamaria said, a restoration project is underway in the 15,000-square-foot building. It’s a painstaking process because they want the project to qualify under stringent guidelines for federal and state tax credits that could cover 45% of the cost.

When finished, the St. Rogers Depot will offer two venues for banquets, performances and other events. And Santamaria is planning to roll three train cars alongside the depot to provide extra space for a kitchen, a dining room and storage.

Linking the two halves of the building is a long, polished wood bar with tall lighted letters on the back wall spelling “El Paso.” It’s part of the sign that once stood atop the former El Paso Times and Herald Post building, which was demolished in the 1990s.

“We hope that every night somebody uses it,” Santamaria said. “But it doesn’t have to be the whole place. You can rent this space between them right here.”

They’ve installed new, triple-pane glass in the windows on the I-10 freeway side and two-pane glass on the rail yard side to hold down the noise – but not completely, Santamaria said, to the dampened sound of the whistle from a passing engine.

“Yeah, you can hear the trains when they do that,” he said. “We didn’t want to keep all the train noise out. I just love it.”

The bar area will also feature a slightly wild, 10-by-7 foot portrait by El Paso Artist Bob Wade of the front of El Paso’s historic Engine No. 1, now housed in the Downtown Visitor Information Center.

“It’s a beautiful piece, but the sad part is that it’s the last piece he did,” Santamaria said. “He called us on Christmas Eve and said, ‘I’m done!’

Steve and Isha Santamaria are also involved in other projects they’ve bought into – The Tap, a popular Downtown bar, and the old Fort Bliss barracks that stand between the old Hacienda Restaurant and the Oñate Crossing site on Doniphan Drive.

“The first thing we did at the barracks was secure the building,” said Isha Santamaria. “It was terrible, all the things going on in there.”

Steve added, “We’re just talking, but haven’t made a decision yet, about a boutique hotel. That’s why we wanted to see the restored Gage Hotel.”

It will be a difficult project, he said, requiring a full boat of federal and state tax credits for the restoration – and then there’s the issue of the location, which is anything but easy to reach.

If the numbers don’t work, he said, they may have to scale back on the ambitious project.

As for The Tap, he said, it’s a going enterprise as it is.

“We just want to make sure that The Tap stays The Tap,” he said.