Preservation work on the Pottery House, under way when the photo was taken, has been overseen by El Paso architect Bill Helm. 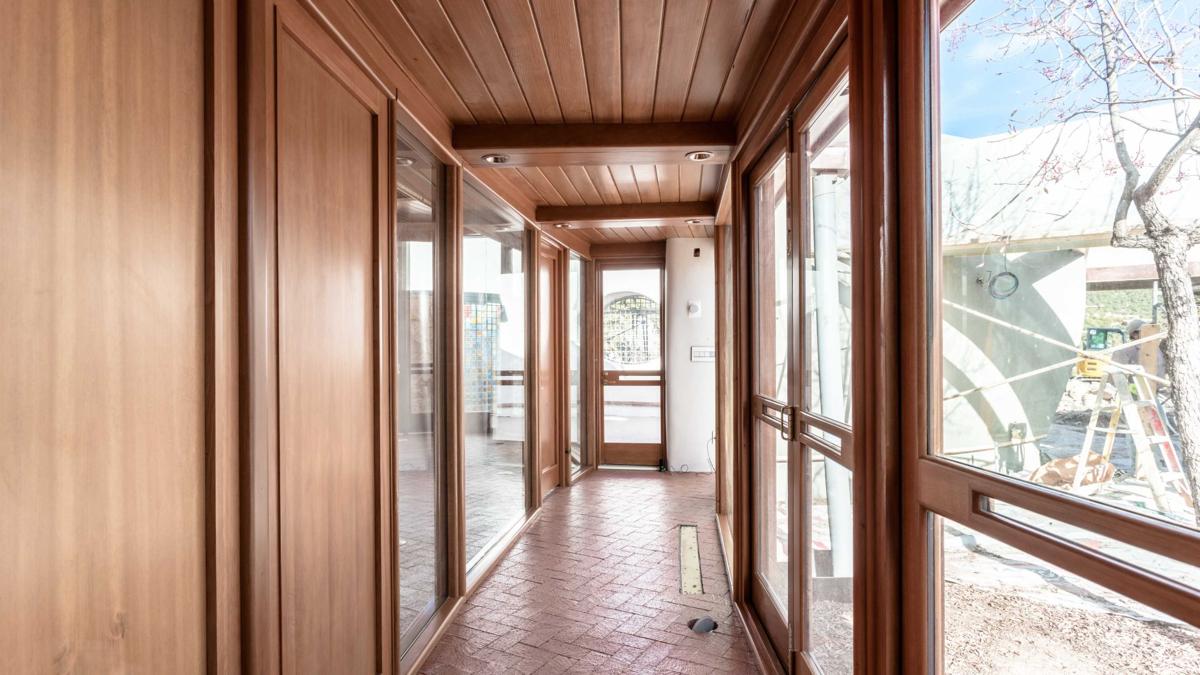 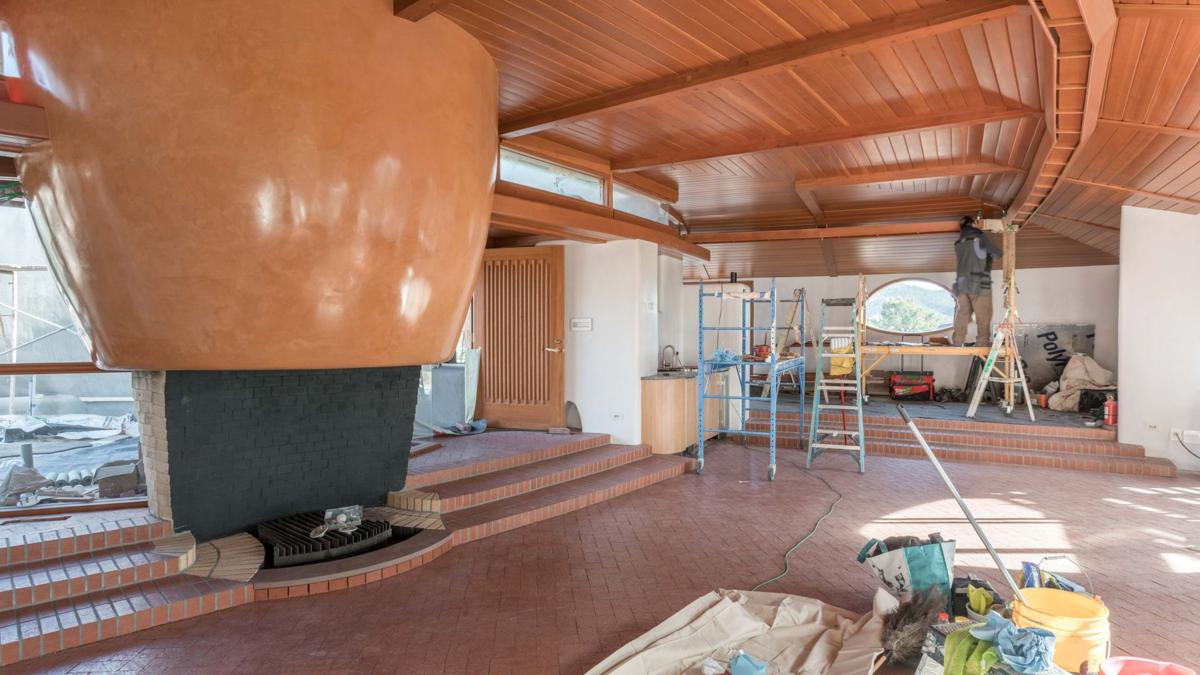 The Pottery House in Santa Fe has plenty of spacious rooms and other features Frank Lloyd Wright didn’t think about like a swimming pool and underground garage. 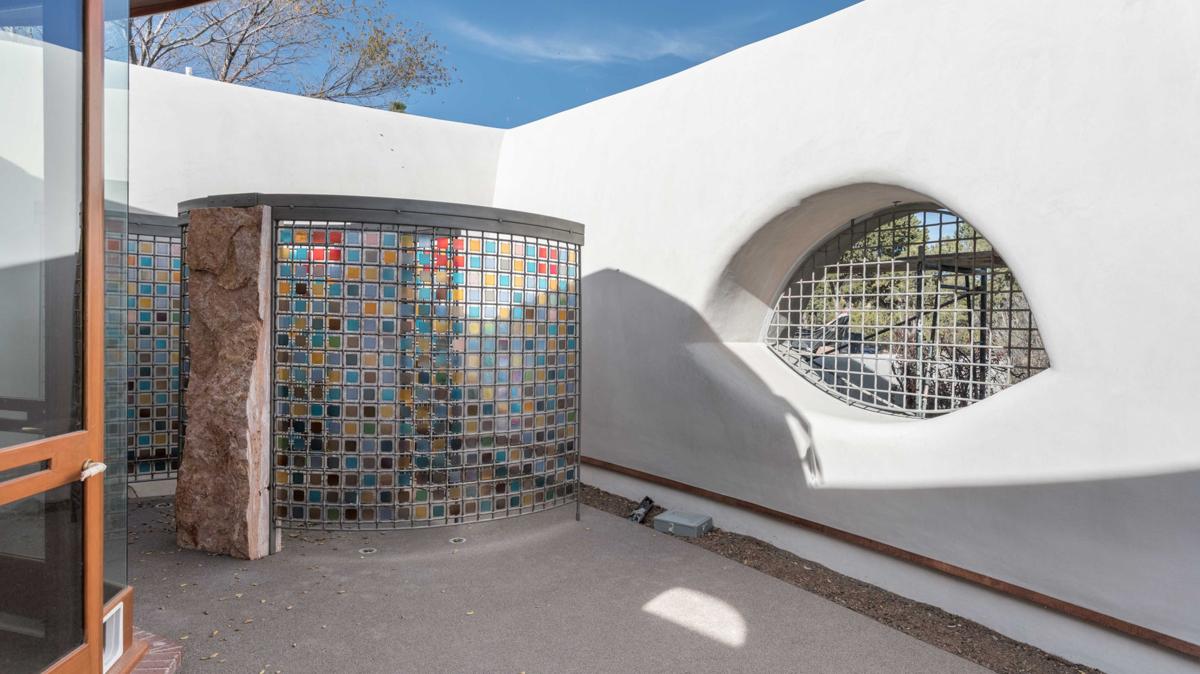 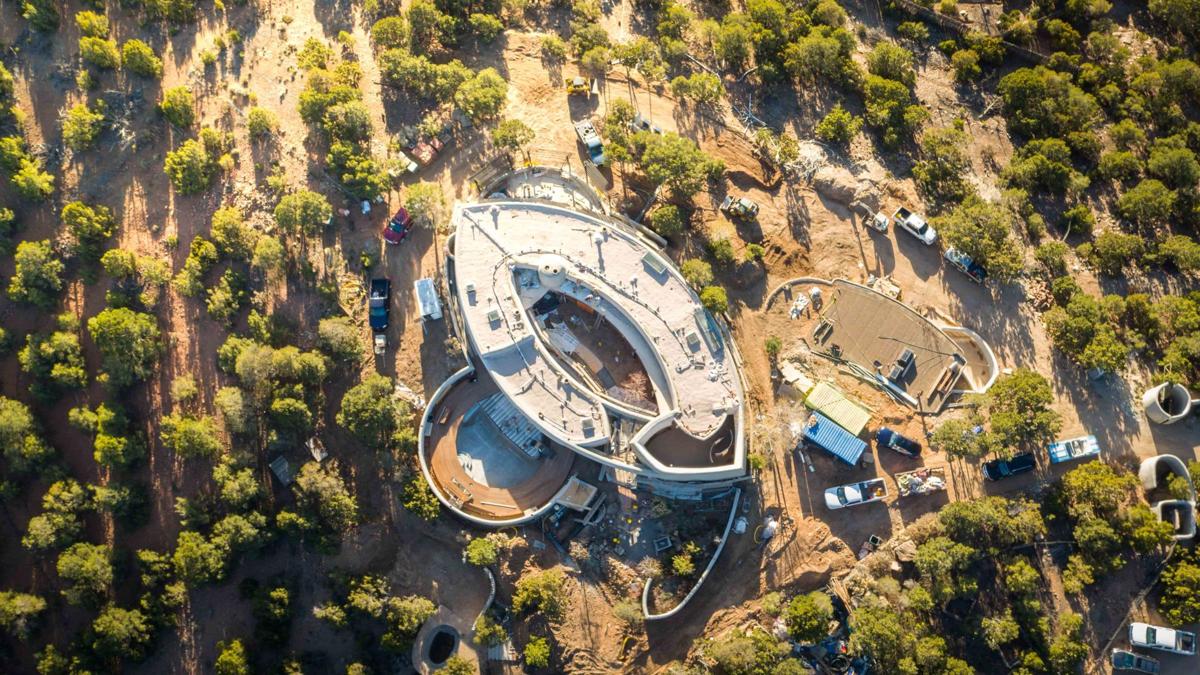 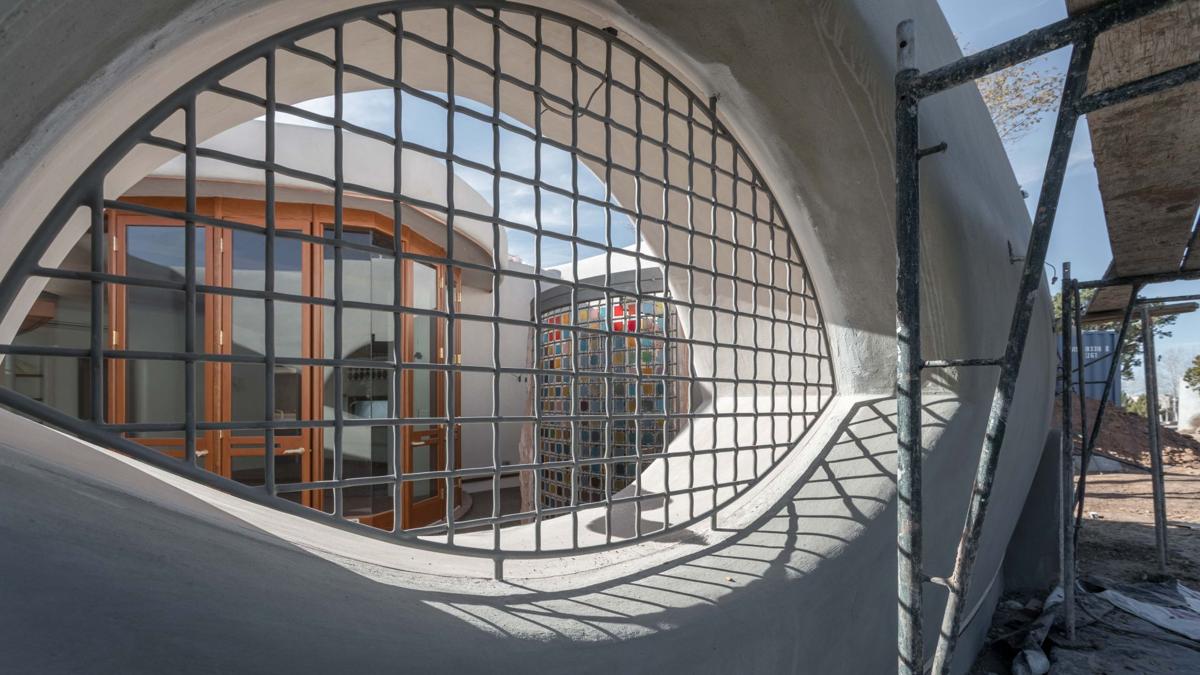 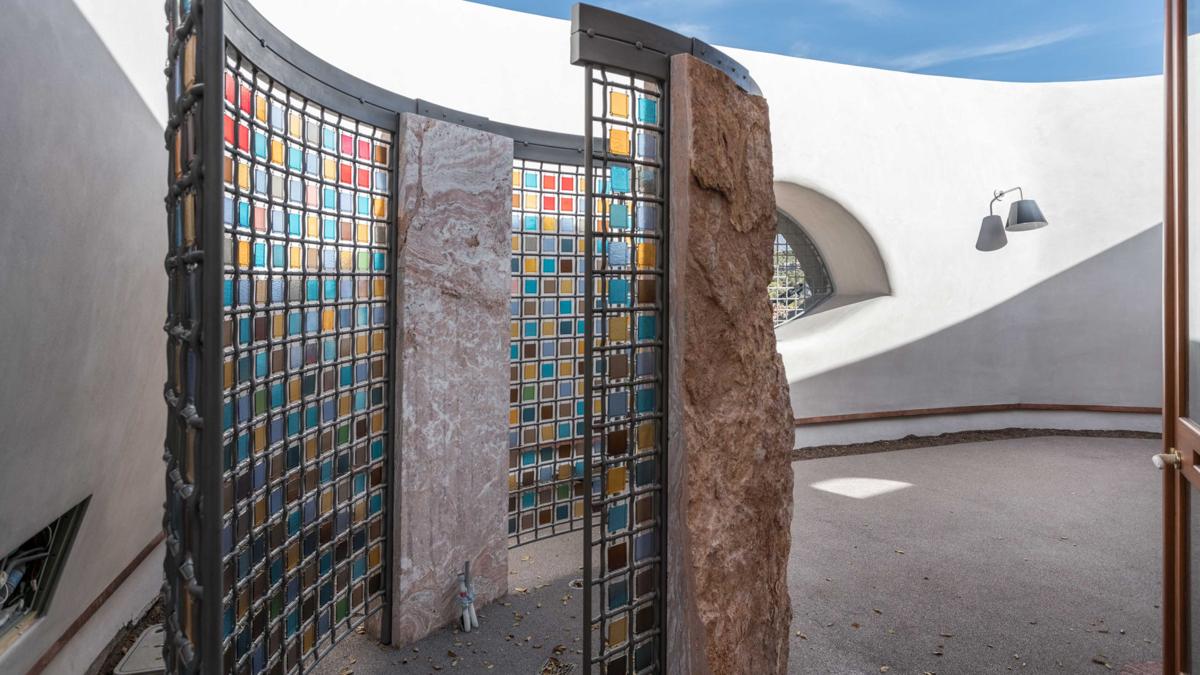 Preservation work on the Pottery House, under way when the photo was taken, has been overseen by El Paso architect Bill Helm.

The Pottery House in Santa Fe has plenty of spacious rooms and other features Frank Lloyd Wright didn’t think about like a swimming pool and underground garage.

Richard Poe, owner of the Poe Toyota dealership on Montana, has special reason to look forward to this Christmas Eve, and it has a lot to do with the late, great Frank Lloyd Wright, the country’s best-known architect.

Poe plans to spend the night for the first time in his newly restored mountaintop house in Santa Fe.

“The really fascinating part of this is the home was supposed to be built in El Paso, or more accurately in Santa Teresa,” Poe said. “The original plans say El Paso.”

The architect behind the restoration of the Pottery House, as it is known, is Bill Helm, head of In*Situ Architecture in El Paso. He says he never thought he’d have the kind of opportunity most architects only dream about – to rework a Frank Lloyd Wright.

Poe says finding the house in the first place was a fluke that turned out to be connected to two childhood relationships linking him to the original project and Wright himself.

He was house hunting in New Mexico on a leisurely Sunday afternoon in April 2015 with an agent and his longtime companion, Cassie Holman. They were on their way to see a not-very-promising property in Pecos when Holman found an online listing for the Pottery House.

Poe said the quick but significant exchange on the road went like this: “She said, ‘You like Frank Lloyd Wright, isn’t that correct?’ and I said, ‘Absolutely,’ and she said, ‘You like the word foreclosure, right?’

A call to the listing agent on the way got them the gate code and permission to show themselves in and look around.

“I took one step inside the front door, and I knew that was the property for me – literally one step,” Poe said. “So we met the listing agent that afternoon, and right then and there, I wrote an offer for the property.”

It was listed for close to $5 million, Poe said, but the house – once a masterpiece – was in horrible condition and had already been on the market for years.

“I bought it for a fraction of that,” he said.

But he would spend plenty more on a complete restoration of the house with a number of significant upgrades.

The 5,000-square-foot, four-bedroom, five-bath house is in the shape of an eye with curving walls, sitting on a promontory that overlooks 50 miles of New Mexico mountains.

It is said to be the finest adobe residence ever built, and the only one Wright designed. It’s also the only residence in Santa Fe with a swimming pool, Poe said.

Back in 1941, El Pasoan Lloyd Burlingham commissioned Wright to design a house on property that’s just west of El Paso. Born in Manila, Philippines, Burlingham worked in the Foreign Service before landing in El Paso.

It was to be a 2,400-square-foot residence that would go up on the escarpment overlooking the Rio Grande and farm fields that are now Upper Valley neighborhoods.

The house was never built because Burlington and his wife separated. But Wright’s designs were used in 1984 to build the house for developer Charles Klotsche.

Wright died in 1959 during construction of his last work, the Guggenheim Museum in New York. But Klosche hired architects Wright had trained to help expand the Pottery House from 2,400 square feet to a sprawling 4,900 square feet.

Its similarities to the Guggenheim and Abraham Chavez Theater in El Paso are no accident.

“Burlingham’s grandson is George Burlingham, who was one of my best friends at Lincoln Elementary School,” Poe said. “I always knew his family was friends with Frank Lloyd Wright because I used to hear about him when I was at the Burlingham house after school.

“Their family still owns the property where they were going to build. It’s still virgin land south of the Santa Teresa development across McNutt, on the bluff overlooking the valley,” Poe said.

Another close friend of his at Lincoln was Aaron Mulville, the son of architect Barnard Mulville, a disciple of Wright’s, who designed the Abraham Chavez Theatre. Mulville included features that were distinctly Wright’s own and similar to the Pottery House.

Suki Burlingham Villalobos, the last Burlingham still in El Paso, said she and other members of the family have kept track of events.

“They’re happy that Richard is renovating it to the utmost that he can,” she said.

Helm said the work on the house has been extensive but all in keeping with the original designs.

“In foreclosure, it took a lot of abuse, and it looked very tired,” Helm said. “It’s actually been an honor to work on it.

“As a preservation architect, I feel it is my duty to preserve works like this.”