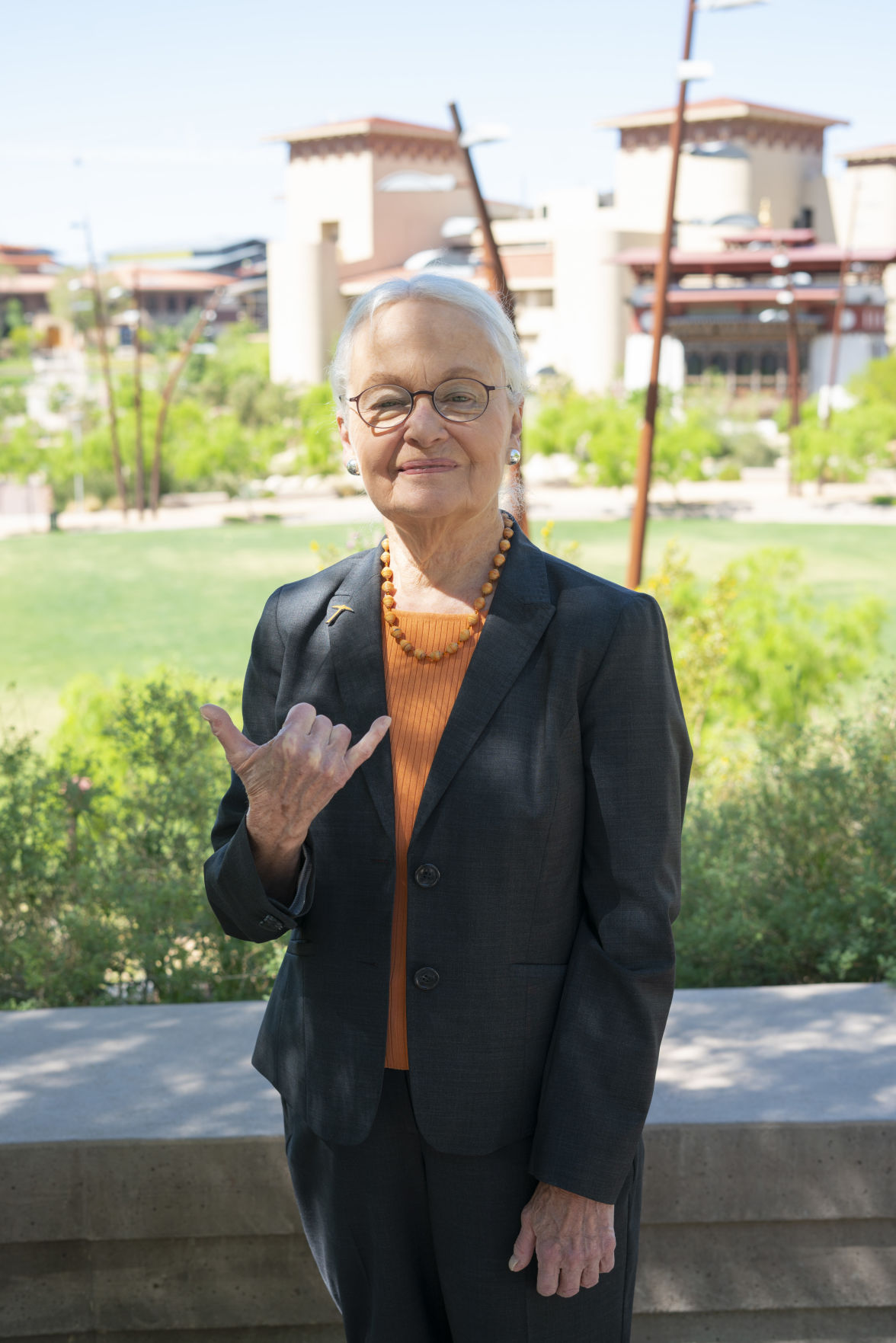 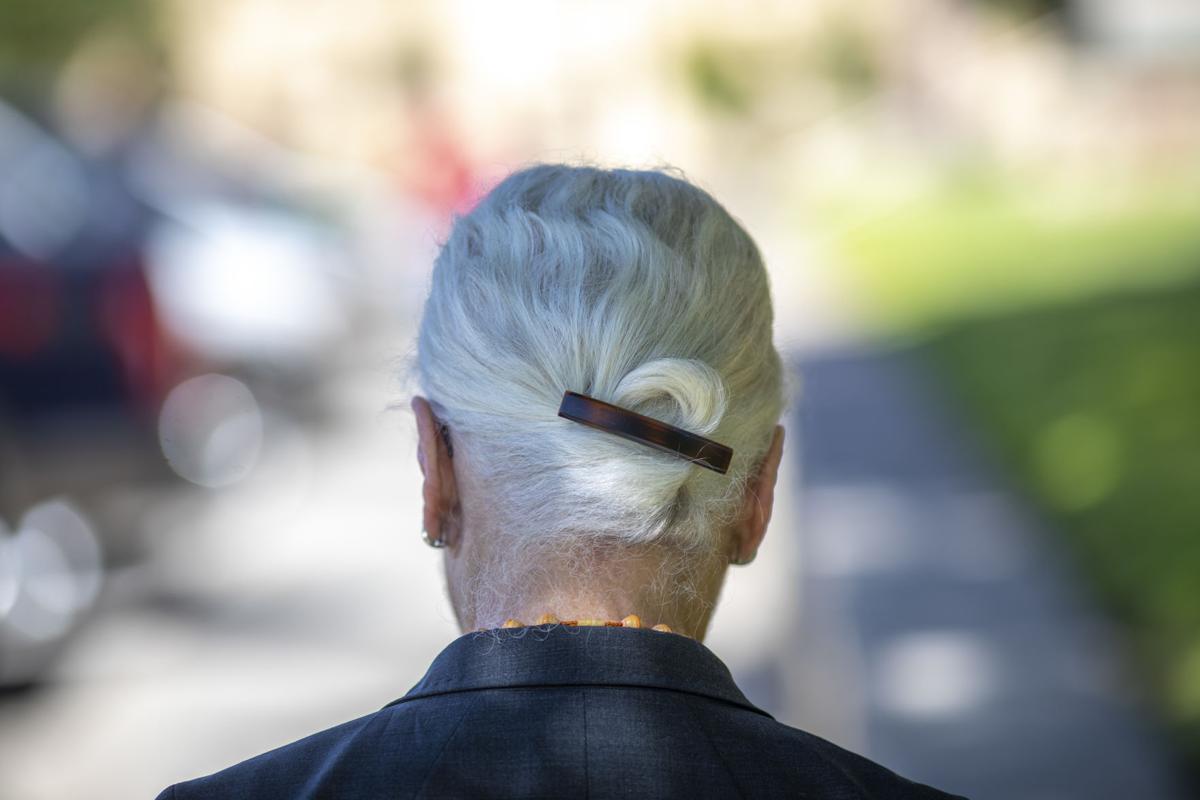 As this paper was going to press late Friday, it was announced that Dr. Diana Natalicio, the beloved former president of UTEP, had died at age 82. Natalicio, who led the university from 1988 to 2019, was known as a pioneer in education and was named to Time magazine’s list of the world’s 100 Most Influential People in 2016. The following is the last extended interview Natalicio did with El Paso Inc. She spoke with features editor Cindy Ramirez in May of 2019 upon her retirement from UTEP.

At least that’s how the woman who has led the University of Texas at El Paso for the past 31 years puts it.

Born in St. Louis, Missouri, to parents Bill Siedhoff, a small business owner, and Jo, a homemaker, Natalicio attended St. Louis University. That’s where she realized she wasn’t prepared for university-level work – an experience that instilled in her the idea that schools had to better prepare students for college.

She came to El Paso and UTEP in 1971 as an assistant professor and moved her way up the academic ladder. She was named president of the university in February 1988.

Through various initiatives, she’s worked with public schools across the region to improve and align curricula to better prepare students for college – whether or not they chose UTEP.

And since the beginning, she has championed “access and excellence” at the university. More than a catchphrase, the pair of interweaved goals has become a model of success in higher education and given UTEP national prominence.

Now 79 and preparing to retire, the avid baseball fan is ready to begin a new chapter in her life, turning over the reins to former U.S. Air Force Secretary Heather Wilson on Aug. 15.

Natalicio has been on what she calls a “farewell tour,” delivering speeches and receiving awards from organizations near and far. She’ll deliver her last set of commencement speeches as UTEP president during four ceremonies May 18-19.

El Paso Inc. recently caught up with Natalicio on campus, where she talked about her career highlights, what’s next for the university and for her, and how meeting St. Louis Cardinals legend Stan Musial remains a highlight in her life.

Q: How’s the transition of leaving the Hoover House, the university president’s residence, going so far?

It’s very difficult. I’m moving from a great big house, where I had the capacity to keep stuff, to a condo. I haven’t pruned that collection of stuff for 30 years. I just kept adding to it.

Q: You recently had a “Thank You for 30” exhibit featuring university T-shirts you’ve acquired over the years.

Yes, that was one way to start to downsize.

Q: The logo for that scholarship fundraising campaign is an image of your hair bun. Do you see that as your crest?

I don’t know, but I do think it’s my best angle, so might as well take that image and have fun with it. I like whimsy; I like things to be fun, and this has been fun.

Q: Do you see yourself symbolically letting your hair down on your last day?

I don’t know. Maybe by then I’ll have pulled it all out.

Q: How emotional is this for you, is it building as we get closer to August?

I haven’t had a chance to reflect on it much.

I’m so wrapped up in things to do. My to-do list keeps getting longer and longer. There’s lots of events to celebrate at the end of the year, in addition to my farewell tour where I’m invited to all these events for one last award or one last presentation.

One of the things I’m going to like a lot is that, now, every morning I get up and I have a calendar with appointments every hour. Every day is kind of a marathon.

Q: The phrase “access and excellence” is one that you’ve long used to describe UTEP’s mission. Is that something you coined?

Early on I felt that it was important to spell out those two goals. The whole idea was that, first and foremost, we’re here for a reason at this university where the surrounding region had been historically undereducated.

So it was up to us to do something about it and create opportunities – and that was the access piece.

And then once you admit students, you can’t offer them anything except the best high quality degree possible because they’re making a big bet on themselves and on UTEP that this investment that they’re making – time and money – is going to pay off.

Q: Has the meaning of “access and excellence” changed over the years given where the university is now?

I think clearly we succeeded in achieving those two goals, which many people thought were risky and impossible to achieve.

A lot of people believe that if you are not highly selective in admissions, then you won’t ever achieve the high level of excellence required to succeed as a university.

We set out to prove that wrong, and we’ve succeeded.

Q: UTEP recently reached top-tier status with almost $100 million in research spending a year. Did you do a little dance when you met that goal?

Yes, I did a big dance, actually. And so did a bunch of students, faculty and staff. And I hope the community did, too. It was certainly something to celebrate.

Q: UTEP is now rated an R1 top-tier doctoral university with very high research activity in the Carnegie Classification of Institutions of Higher Education. Where does research go from here?

We now have a new platform as an R1 university, but we can’t stop there. We not only have a responsibility to continue that, but to build on that and continue improving UTEP’s national brand. That’s only a foundation. You have to keep building up.

Q: What is your favorite spot on campus?

This is it right here. (Looking over Centennial Plaza from the UTEP Dinner Theatre) It didn’t used to be because it used to be all traffic and asphalt. But it’s changed, and it’s beautiful here, especially at night. It really gives you a view of all the different buildings, our beautiful Bhutanese architecture and our growth with some of that construction in the far background.

Q: You have your last commencement speech as university president in a few days. Any special message you’ll be giving? Do you feel ready for it, emotionally?

I want to make this commencement as much as every other as I can. The whole point of commencement is the graduates and their celebration of getting their degrees. It would be somewhat self-indulgent to talk about my journey.

I’m not sure yet how I’ll feel standing at the podium for the last time. I’m just focusing on the students on their day.

Q: You’re here until about mid-August when your successor takes over. Do you have any words of advice for Heather Wilson?

I’m going to leave her a list of unfinished business so she knows what’s out there percolating, but it’s going to be in her hands. I will say that we have to sustain the national narrative that we’ve developed about the role of public education in historically underserved regions – and I think we’ve come up with some of the best models that have ever been built.

Q: Anything on your bucket list you feel you didn’t accomplish?

I think that there are a few things we started working on the last few years that are unfinished business, as I call them.

One of them is completing the Asarco plant transaction. We’ve got all the pieces and parts in place but lawyers get involved and it’s just slowed.

It’s valuable to the community and, frankly, offers one option for Downtown as a big events venue, possibly. We need some expansion space to direct other venues or other sports facilities there.

Yes, perhaps. I’m not going to get into the arena controversy or any of that. But it would be great to have a great soccer stadium there, and it could be a joint venture with the city or county or something like that, but right now it’s still in legal limbo.

Q: Any other unfinished business?

We have a lot of really exciting things happening out at the airport in Fabens, with a bunch of aerospace companies and NASA, working with the school districts in the Lower Valley doing propulsion research and working with drones and all kinds of things.

Q: So that’s the to-do list you leave behind. What’s on your personal to-do list moving forward? What’s next for you?

I want to evaluate what things I enjoy doing, and not scatter my commitments too much. I’m interested in most everything, but you can’t really provide the kind of service that you should if you’re spread too thin. And I’m already spread too thin.

I want to do some traveling, hopefully primarily for leisure.

This is home for me. I‘ve lived here 45 years. It’s a very livable city; the people are very nice. I think the climate is wonderful. El Paso is perfect for me. And there’s lots of wonderful people here, of course, who make it wonderful, too.

Q: Do you see yourself writing a book in your future?

I may, actually. I think about it from time to time, but I don’t feel like I’m ready to commit to do that. I’m just very cautious not to overcommit because then I’ll be burdened by that deadline.

Q: Any idea on what you’d write about or an approach you’d take?

I’ve led a very improbable life, so I think it would be wonderful to be able to reminisce about that. I have a lot of stories and anecdotes I think back on. I know I’d want it to be funny.

Q: Any particular story that stands out to you?

When I was in college, I had two jobs. I was a typist, and I’d tutor high school students. My boss had a shoebox with index cards with a list of the (tutoring) clients, and on one occasion I pulled out a card, and it was Stan Musial’s daughter. (No. 6, Musial, regarded as the best ever St. Louis Cardinals player.)

Now, just imagine, Stan Musial had been my baseball hero for such a long time, to the extent that I even put a six on the back of my shirts growing up. … I went to his house and he opened the door and I nearly fainted.

My dad, years later, was celebrating his 90th birthday, and we had a little party for him in a place with private rooms and a central buffet area. Just as I went out to get food, this family comes in, and it’s Stan Musial and his family. I was like, “Oh my goodness, this is unbelievable.”

So after that, I would always tease my dad that Stan Musial came to his birthday party.