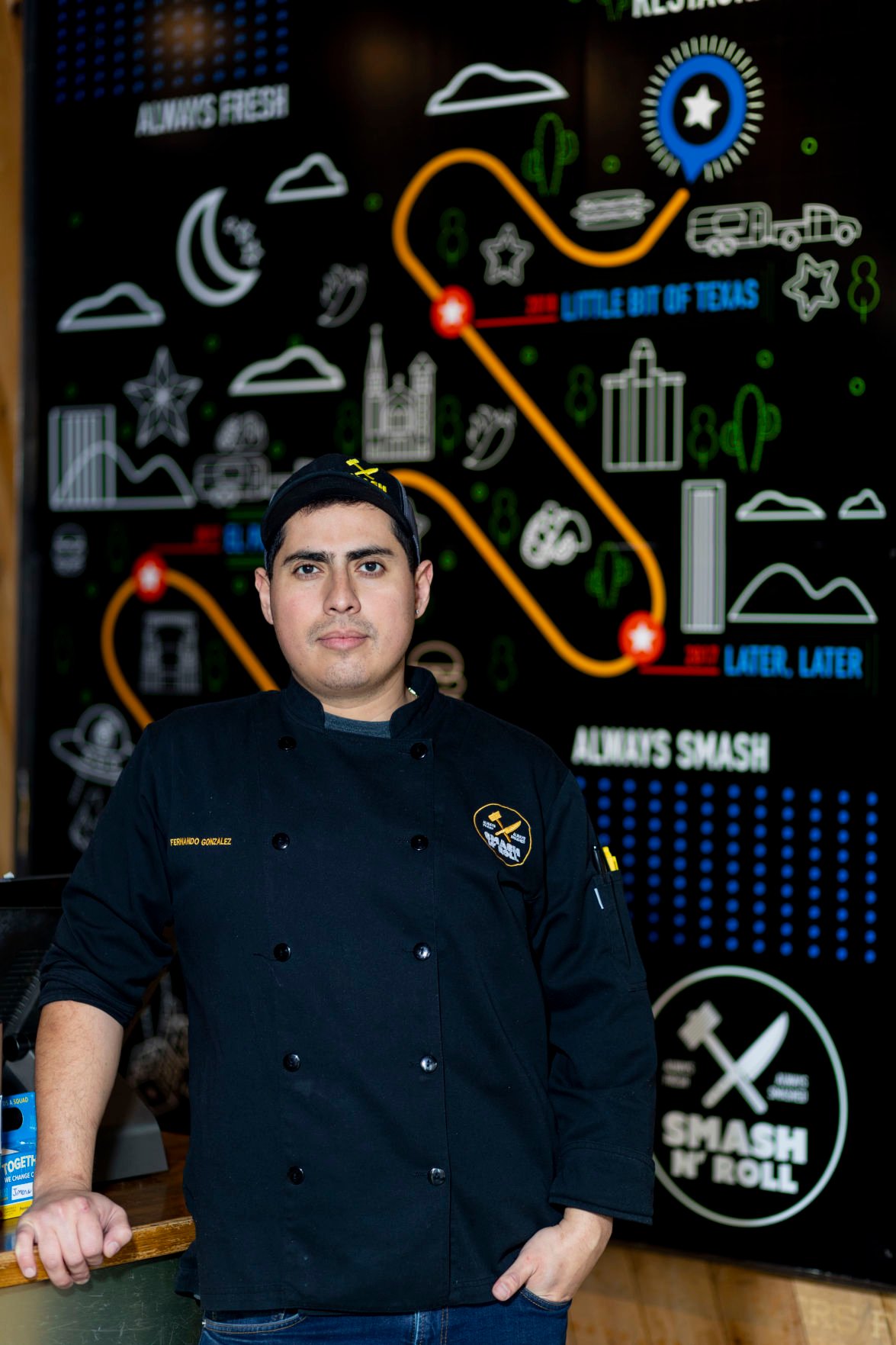 Smash N’ Roll owner Fernando Gonzalez in his new restaurant at 5001 N. Mesa. The young chef’s career took off after a fortuitous meeting on an airplane. 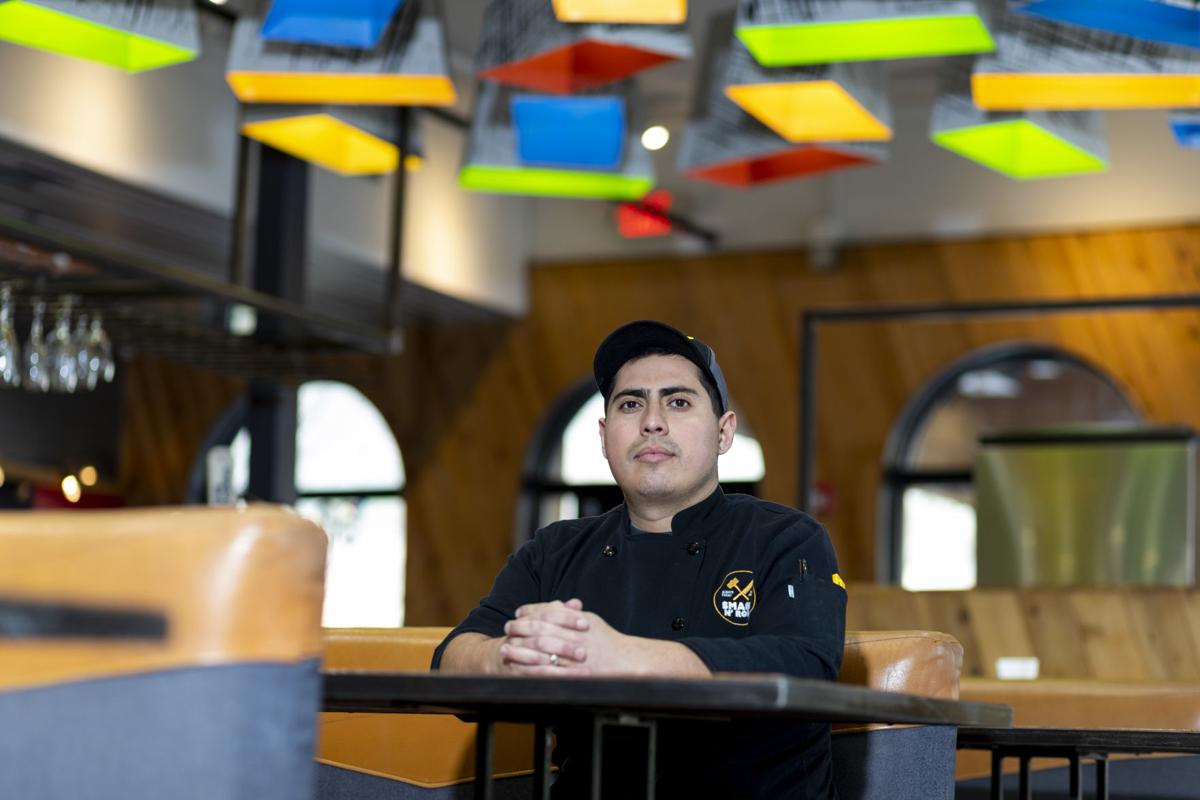 Smash N’ Roll is a fusion of El Paso, Juárez and Las Vegas.

Smash N’ Roll owner Fernando Gonzalez in his new restaurant at 5001 N. Mesa. The young chef’s career took off after a fortuitous meeting on an airplane.

Smash N’ Roll is a fusion of El Paso, Juárez and Las Vegas.

The new Smash N’ Roll restaurant began as a dream under the dazzling lights of Las Vegas.

Opened last month on the Westside, the burger and taco joint exists today because of a journey of chance encounters and gutsy decisions that carried a young chef – Fernando Gonzalez – from flipping burgers as an 18-year-old Dairy Queen employee to cooking alongside executive chefs.

Today, Gonzalez, who was born in the Colonia Margarita in Juárez, Mexico, is the owner of Smash N’ Roll, a restaurant he considers his contribution to building the next generation of borderland flavors.

“We’ve designed our food to give back to the people of the border, to thank them for their support, for accepting us,” Gonzalez said about the restaurant venture sustained by him and his wife, Ivanna Hernandez.

Smash N’ Roll opened Jan. 1 at 5001 N. Mesa – the old Independent Burger location – after Gonzalez built his street credentials on El Paso’s food truck circuit. But the roots of his restaurant go back to one day in 2014 in Las Vegas.

“I had just graduated with a degree in culinary arts and restaurant management and went to Las Vegas for my graduation party,” Gonzalez recalled. “I went with my wife, my little daughter, and my mom and dad. It was like a vacation for all of us.”

Once there, it wasn’t the clubs or the shows that caught the attention of the 22-year-old graduate of El Paso Community College.

“It was all the restaurants, all the food and all the famous chefs,” he said. “I saw that, and I knew: I want to work in a restaurant here.”

By the end of their short vacation, Gonzalez had that dream set in his mind. On the flight back to El Paso, he noticed his parents chatting with a woman sitting next to them. After landing, while walking through El Paso International Airport, the woman, named Perla Sanchez, asked Gonzalez and his family how much it would cost to take a taxi from the airport to the international bridge.

The family gave her a ride. As they chatted, their new friend mentioned something that could not have been better scripted for the fledgling dream that had taken hold of Gonzalez just a few days before.

“I told him my husband was an executive chef,” Sanchez recalled. He was a chef at the P.F. Chang’s in Henderson, Nevada, a city near Las Vegas.

“So later I talked to my husband to see if he could interview Fernando,” Sanchez said.

The aspiring chef had just returned to El Paso from Las Vegas when he learned he had a chance for an interview with P.F. Chang’s – back in Las Vegas. He couldn’t afford the plane ticket, “so I told my wife, ‘I don’t have money. We have to drive.’ So we drove back to Las Vegas,” he said.

Gonzalez, his wife Ivanna, and his 4-year-old daughter arrived in Las Vegas on a Sunday night for his anticipated Monday interview. Monday came without an interview. Then Tuesday – no interview.

Then Wednesday arrived, and, finally, Gonzalez met the man who had inspired his 11-hour drive: Hector Sanchez, executive chef at P.F. Chang’s in Las Vegas.

Sanchez, a person inundated with the demands of hundreds of people and countless details of running a large restaurant, didn’t pause when asked if he recalled Gonzalez.

“Oh, yes, I definitely remember him. I can’t forget him,” he said. “He drove all those hours from El Paso to Las Vegas just for the chance at an interview and not knowing if he would get the job or not.”

Gonzalez was hired, on the spot. He and his family drove back to El Paso to collect their belongings and then headed back to Las Vegas, their new home for the next step in their journey.

Uprooting his family from El Paso, Gonzalez said, was not an easy decision.

“That was very hard – for us to leave, to take our 4-year-old daughter, and my wife was pregnant,” he said. “It was a tough decision. And I went to work, just as a kitchen worker – the one who cuts the veggies, does the prep. I really wanted to be a chef, but I had to earn my way up to that.”

Sanchez said that was when Gonzalez showed something special.

“Typically it takes new hires in the kitchen at least a year to become even close to being a chef. He did it in two months,” Sanchez said.

Gonzalez worked as a chef at P.F. Chang’s for five years – two in Las Vegas and three in El Paso at the Fountains at Farah restaurant – with a good paycheck and a grueling schedule.

He bought a house for his family and invited friends and loved ones for a house-warming party – and to make an announcement.

Gonzalez assured them that he wasn’t crazy. He and his wife had bought a dilapidated food trailer, fixed it up and were serving up Gonzalez’s signature tacos – sometimes three thousand a night.

They established a self-sustaining business, and now they have the brick-and-mortar restaurant.

“I’ve always been adventurous,” she said. “That’s my personality. But I’ve also always believed in Fernando, and in what we could do together.”

She stood by one of the framed designs hanging in the restaurant. It’s a drawing of their first food truck. “This represents our story, everything we went through in trying to reach our dream,” she said. “And now we have it, this fusion of El Paso, Juárez and Las Vegas. It really happened.”