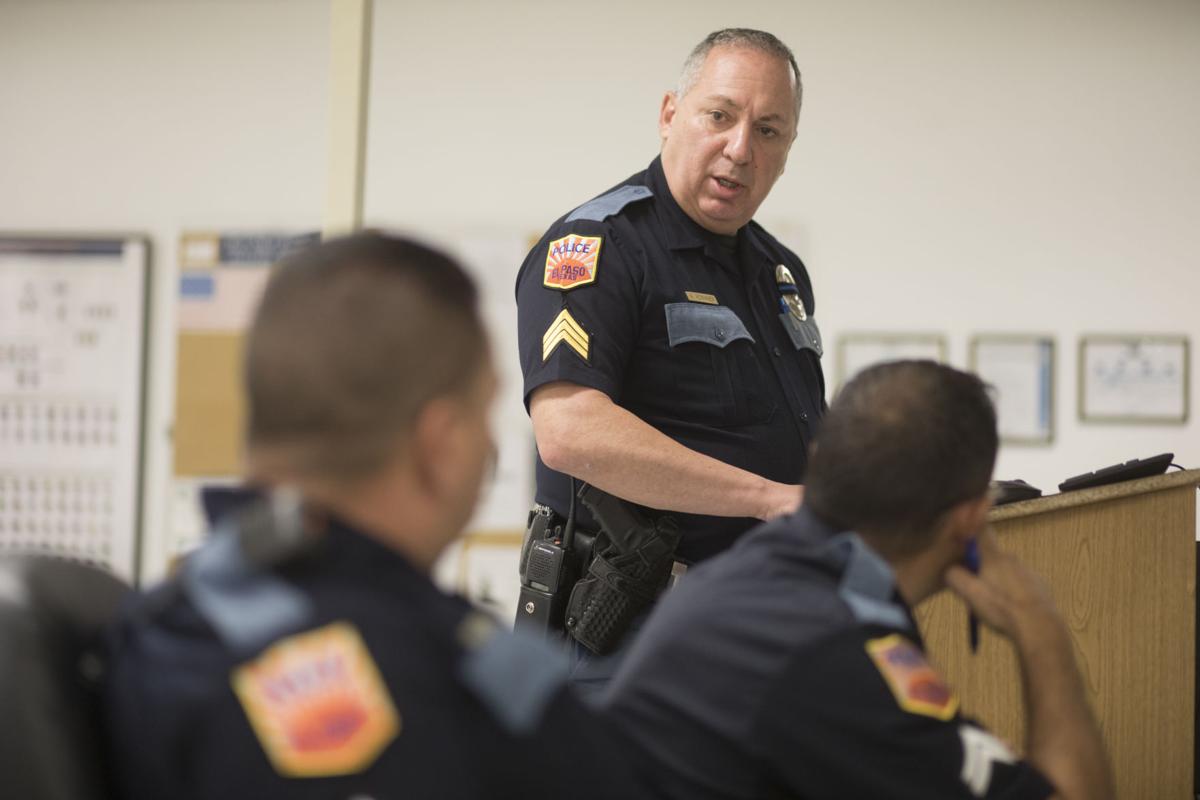 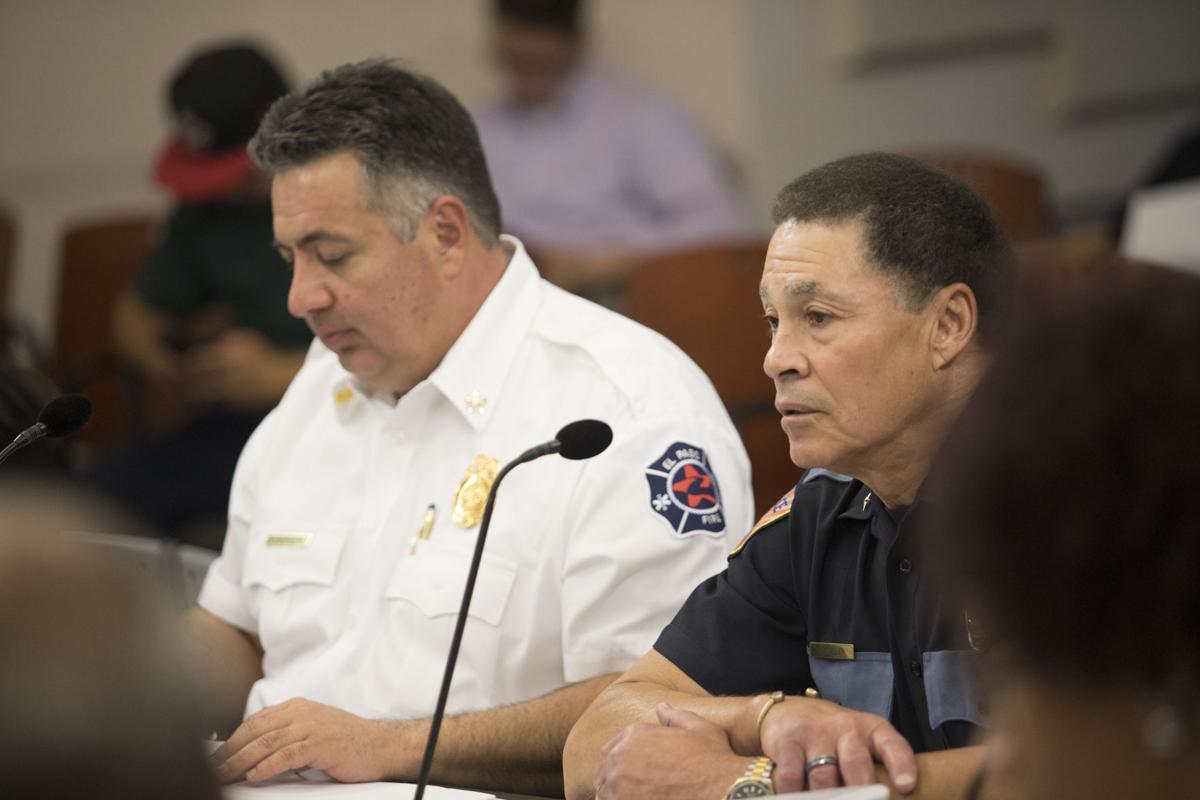 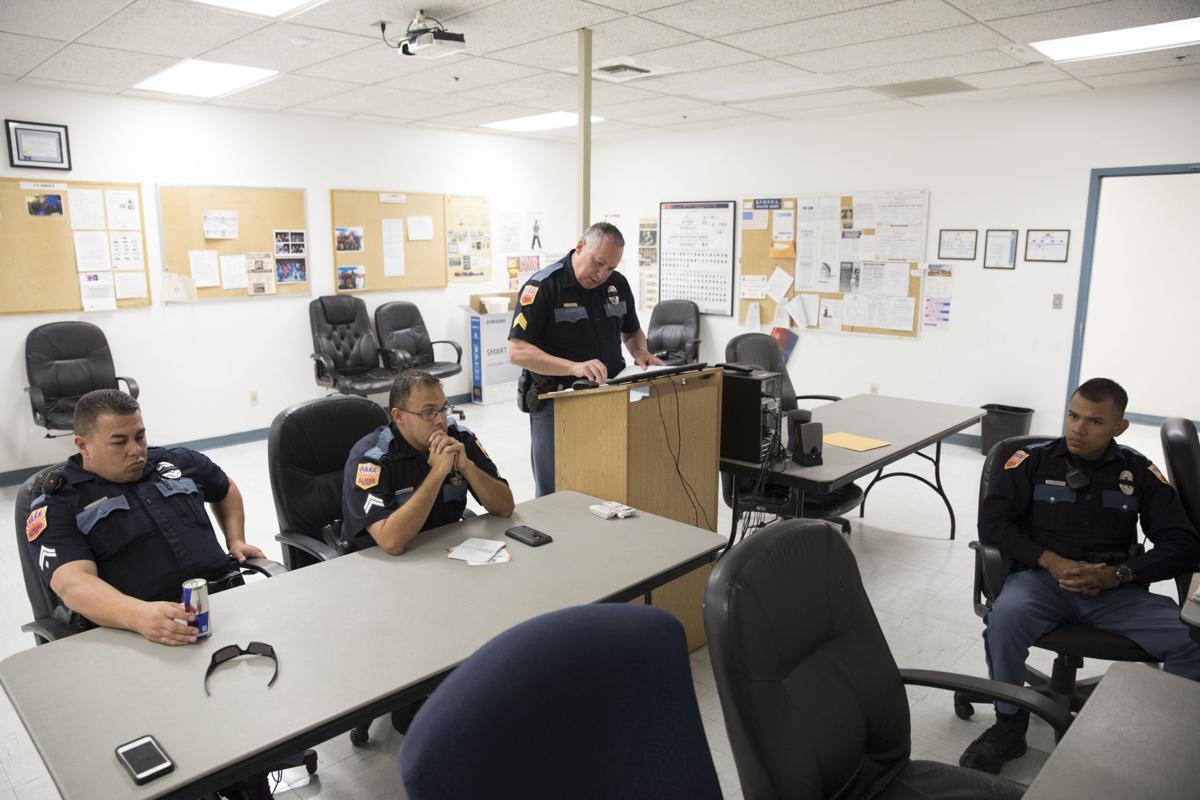 The El Paso Police Department has just over 1,046 officers, which may seem like a healthy number and raise doubts about talk of an officer shortage in the nation’s safest big city.

But at the Westside Regional Command Center’s noon shift briefing last Thursday, Sgt. Alan Romaner kicked things off with a three-officer crew that would be working until 10 p.m.

So, it wasn’t the packed squad room you might see on a TV cop show, though Romaner did offer up a pair of quotes for the day – just as Sgt. Phil Esterhaus would every week on “Hill Street Blues.”

Then came the advisories on car thefts, arrests the day before and a warning about the dangers of handling the potent synthetic opioid fentanyl.

He also told rookie officer Julio Guereca that his officer-of-the-month award had come in for his actions on his third day out of the police academy when he arrested an armed and disturbed man who attacked other officers.

“This was an excellent arrest!” Romaner said to Guereca, who now has six months on the force.

The crew was short one officer who would be working at the jail for the day, but at 2 p.m., they’d be joined by the second afternoon shift of four officers who would work until midnight.

“But look what we’re putting out there – three officers to handle the whole Westside,” Romaner told El Paso Inc. “To say we’re understaffed is an understatement.”

He concluded his briefing with a good Esterhaus admonition, “Most importantly! Be safe out there.”

For the public, the department’s staffing situation can mean an hours-long wait for an officer after a non-emergency call for assistance – longer if officers are busy responding to a serious traffic accident or crime.

At a recent briefing for El Paso City Council members on the projected public safety budget for the year, Police Chief Greg Allen ran through the numbers with Fire Chief Mario D’Agostino.

The city’s projected general-fund budget, which consists of the local taxes and fees that fund core city operations, is $398 million. That’s a $15.7 million or 4.1 percent increase for the coming fiscal year, which starts Sept. 1.

Overall, the city is looking at the possibility of a 3.9 percent property tax increase. That would increase the city tax on a $100,000 home by $39 a year for most homeowners and by $23.61 for those who have the over 65 or disabled exemption.

The city has committed to increase the size of the police force by a net of 30 officers a year to reach an increase of 300 officers in 10 years.

But that is proving difficult for El Paso, as it is for departments across the country, in a new era of body cameras, high-stakes accountability and harsh public criticism of police officers involved in controversial incidents.

Chief Allen said there are just not that many young people interested in becoming police officers today. Among those who enter the city’s police academy, some quickly lose interest when they get a dose of the training.

“We lose some because they didn’t know what they were getting into,” Allen told the council. “It’s a shock because it is militaristic.

“There’s a lot of discipline we’re trying to impose on them.”

There are also intense medical and psychological examinations along with talks on what the life of a police officer is really like.

“We need to be sure we get quality people – not just numbers,” he said. “We lose people with that whole process.”

The department is running two academy classes a year to keep up with attrition and to grow the numbers. Allen told council members that the goal for the latest class was to get 100 recruits, but only 76 made it in.

As of two weeks ago, Allen said, that number was down to 70.

“The millennials are looking for where the money’s at,” he said. “When I came on, I was looking for a career. Now, it’s not that so much. It’s a ‘what’s in it for me’ attitude we have to deal with.”