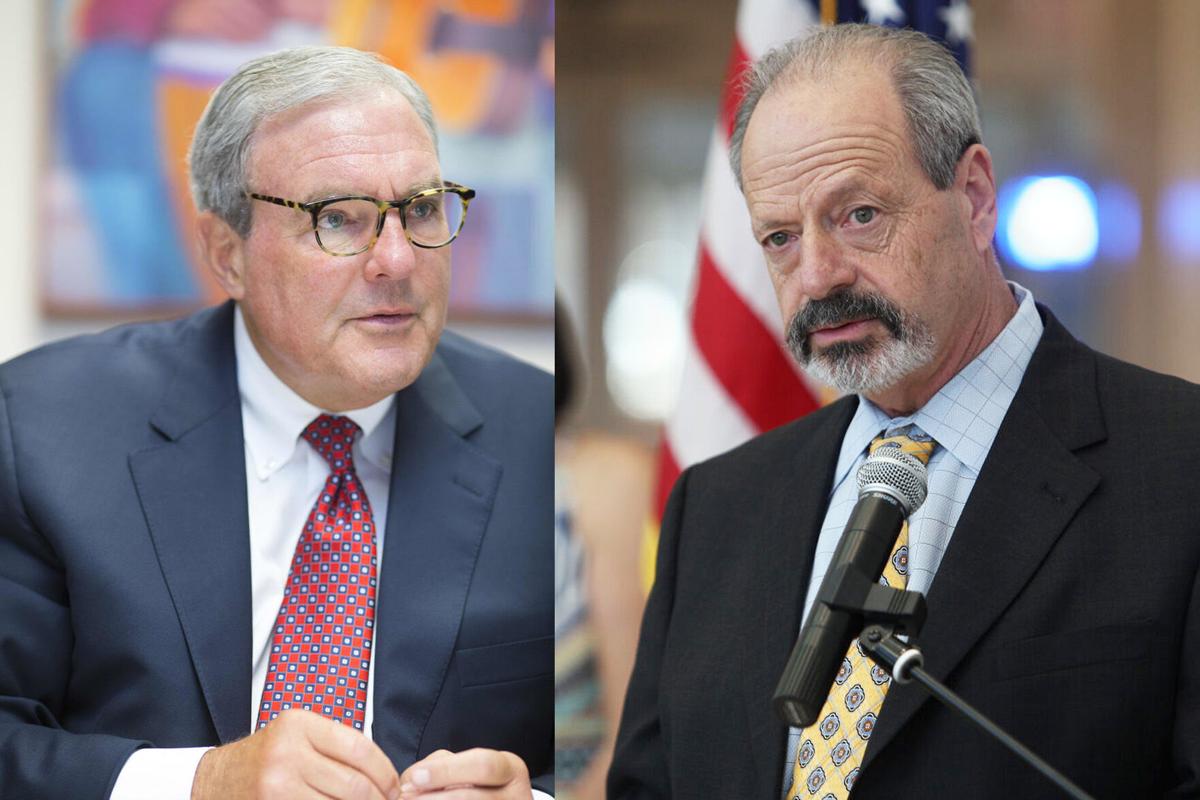 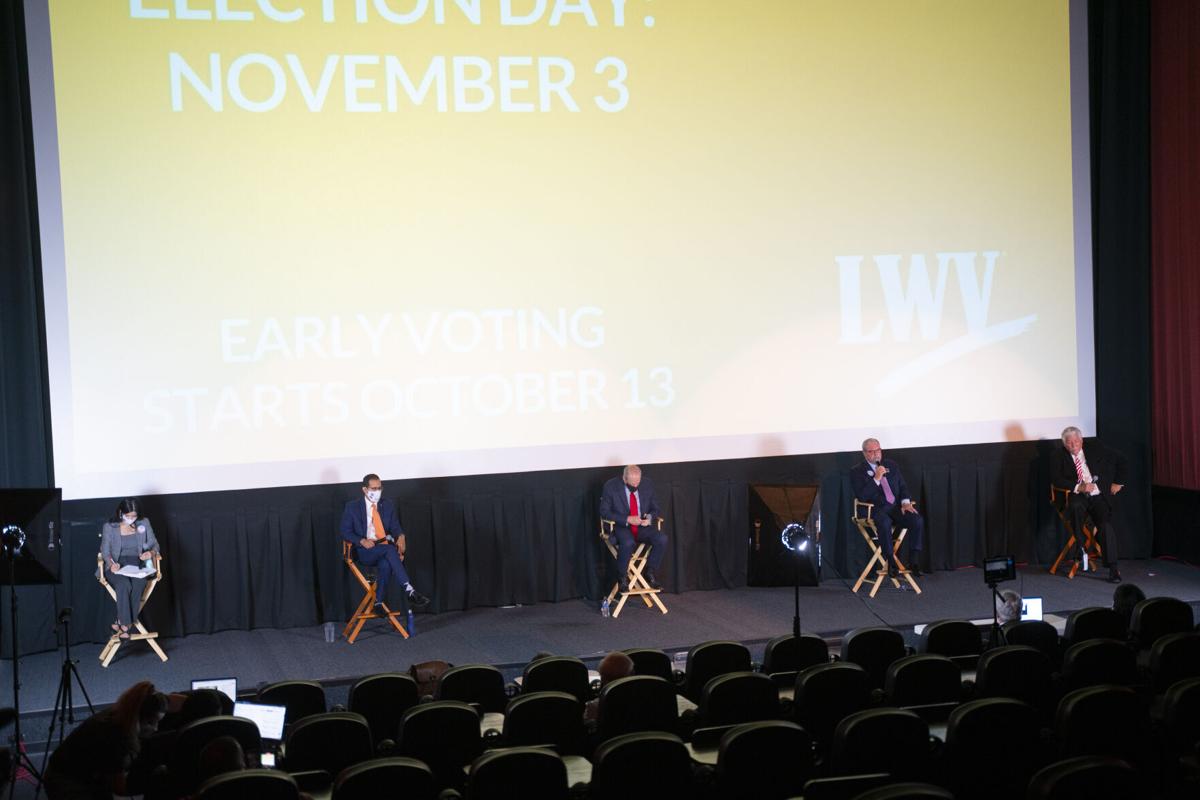 From left: Veronica Carbajal, Carlos Gallinar, Oscar Leeser, Mayor Dee Margo and Dean Martinez speak at a mayoral candidate forum hosted by the League of Women Voters in September. Leeser and Margo received the most votes in the Nov. 3 general election but did not win the more than 50% needed to win outright. The runoff election is Dec. 12 and early voting is underway.

From left: Veronica Carbajal, Carlos Gallinar, Oscar Leeser, Mayor Dee Margo and Dean Martinez speak at a mayoral candidate forum hosted by the League of Women Voters in September. Leeser and Margo received the most votes in the Nov. 3 general election but did not win the more than 50% needed to win outright. The runoff election is Dec. 12 and early voting is underway.

There’s a mayor’s race on in El Paso between the current mayor, a Republican, and the former mayor, a Democrat, and while city elections are nonpartisan, the winner will determine El Paso’s direction for the next four years.

But there’s been so little campaigning by either camp that Richard Pineda, chair of the UTEP Department of Communication, is calling it “campaign malpractice” – not to mention weird.

Annello and Gutierrez are campaigning hard door-to-door and with mailers.

In contrast with the intense door-to-door and media campaigning for mayor leading up to Nov. 3, things have been strangely quiet since, with little in the way of mail-outs or door knocking, although both campaigns have continued to run some TV ads and the occasional newspaper insert or ad.

“The one thing that has jumped out to me after the general election is that both candidates are essentially running stealth campaigns,” said Pineda, whose research and teaching in UTEP’s Communica

“It’s hard for an incumbent to be that many points behind and come back,” Pineda said of Margo’s chances. “It’s not impossible, but you almost have to be in hyper mode and constantly aware of everything going on.

“You have some very specific things you need to do in a runoff campaign,” he said. “The first thing is you’ve got to activate at least a portion of voters that came out for you the first time.”

In the three weeks following the Nov. 3 election, Pineda said he received one mailer from Leeser but saw no new campaign signs going up or heard of any door knocking by supporters, much less the candidates themselves.

Mayoral candidate Veronica Carbajal, who came in third, has endorsed Leeser, as have the three other candidates in the race – Carlos Gallinar, Dean “Dino” Martinez and Calvin Zielsdorf.

The lull in campaigning could have something to do with all of the activity on the COVID-19 front that’s kept Margo busy and the recent death of Leeser’s 89-year-old mother, Rhoberta, Pineda said.

“Or maybe the sense in the Leeser campaign is there’s no fear of losing, and in the Margo campaign, there’s no expectation of winning,” he said. “It’s one of the weirdest runoffs I’ve ever seen.”

One longtime campaign veteran who asked not to be named said Leeser “doesn’t have to campaign.”

“And if you’re Margo, what do you do to change the tide? What do you tell your donors?” he said. “And who does Dee target when the average voter is a 63-year-old Hispanic female?”

If there is one big issue that clearly separates the two candidates, it’s the fate of the multipurpose performing arts center, or arena, that voters approved in the 2012 bond election.

Despite the delays in getting the project going and the controversy over where to build it, Margo wants to stick with Plan A – build it in the historic Duranguito neighborhood even if the original price tag for a 15,000-seat facility has gone from the original $180 million to at least $250 million.

Leeser said, “We told the citizens that we would give them a performing arts center, and we need to provide that. And I think the best place today would be at Abraham Chavez (Theater).

“And then, second of all, we need to look at how we can develop the (Duranguito) area in a proper way, making sure that we enrich their culture and the beauty of our community.

“How we’re going to do that is not the mayor’s decision, but as a whole, it’s our community decision.”

Margo’s first step into politics was in 2011 when he ran for and won a seat in the Texas House of Representatives. Two years later, he was defeated for reelection by Joe Moody, who’s held the office for four terms since.

Before getting into politics, he was a highly successful businessman who built JDW Insurance into the biggest independent agency in El Paso leaving the company in 2012.

He has come under fire for raising taxes, bond sales not approved by voters, tax incentive packages for big developers and his heavy hand in dealing with outspoken citizens and council members at City Council meetings.

As mayor he’s also had to make tough decisions when it comes to the city’s response to the COVID-19 pandemic, which has hit El Paso harder than other Texas cities and attracted lots of negative national attention.

Then, there’s the city’s unemployment rate, which peaked at 14.4% in April – the highest point in decades – as a result of COVID 19 measures, but has fallen since. It was 8.2% in September, according to Workforce Solution Borderplex’s most recent labor report.

In November, Margo pushed back against the tougher COVID-19 restrictions that were briefly implemented by El Paso County Judge Ricardo Samaniego before being blocked by a state appeals court. Margo has argued the city and county need to balance health and the economy.

Asked about his poor showing on Nov. 3 and why he’s not campaigning harder, Margo said, “Unlike my opponent, I must continue leading this community, regardless of an election, and I cannot compromise my responsibilities as mayor in the process.

“It has been an honor to serve as mayor, and I am hopeful the community has seen a difference in my leadership versus that of my opponent.”

Before COVID-19 and the necessary governmental response to it, Margo said, “The unemployment rate was 3.7% versus 5.1% at the end of Leeser’s term in office.

“I would like to utilize my leadership experience to rebuild our economy as we come out of this pandemic, and my term as mayor is proof that I have what it takes to address the economic needs of our community.”

Margo cited the real estate market, which is booming now, and the huge Amazon fulfillment center going up just beyond the city limits on the far Eastside. And he hinted that another big company may be coming to Santa Teresa, New Mexico.

“The people filling those jobs will come from El Paso,” he said.

And in one last hard swipe at Leeser, Margo said that after all of Leeser’s Familiarization Tours to different cities with El Paso delegations during his 2013-2017 term as mayor, “There literally were no new businesses, relocations or expansions – zero.

“He had nothing to show for it.”

Leeser disputes that and says El Paso’s unemployment rate dropped from 9% to 3.4% during his term.

“How did that happen?” he said. “It didn’t happen by accident. It happened by us going out and creating jobs.”

In his last three years in office, he said, “over 18,000 jobs were created in the El Paso economy.”

Voters, he said, trusted him and would have supported him for a second term in 2017, but a health scare kept him from running for reelection and Margo won the mayor’s seat.

If elected again, Leeser said, he’ll restart his Familiarization Tours because he believes taking delegations to other cities and inviting their leaders to El Paso was and will again be a successful strategy.

“We brought these companies to El Paso, and then we stopped talking to them,” Leeser said. “That’s a shame. But we’ll be visiting again.”

And companies did come to El Paso during his four years as mayor, he said, citing Prudential Financial.

The company opened its doors in 2014 and then announced an $870,000 investment in El Paso in 2015 to help create a “skilled math and technology workforce, specifically targeting Latino students, veterans and military spouses,” according to online company announcements.

“So people have confidence in me, you know, and you’re looking at 75% of the voters,” Leeser said. “That’s something really important to talk about because I would tell you today that we’re in a confidence crisis in El Paso.

“That’s the biggest problem we see today, and this is why I got the percentage of votes I received.”

Margo, he said, doesn’t get along with his City Council, U.S. Rep. Veronica Escobar or El Paso County Judge Ricardo Samaniego, with whom he clashed recently over COVID-19 restrictions.

Leeser didn’t say what he would have favored then or now.

But, he did say, “It’s important that you don’t put profit before safety.

“Our job as elected officials is just to make sure that our economy continues to grow, but we don’t sacrifice the safety of our citizens.”

In the race for Northeast El Paso’s District 4 seat on City Council, contractor Joe Molinar is bluntly questioning the suitability of incumben…

I am a registered Democrat Voter and I wish Mayor Dee Margo all the best of luck in his reelection bid. In these horrible times that Donald Trump left the country in. I would say that Mayor Dee Margo in the only leader at City Hall. That can make El Paso recover from it's jobs loss and pandemic recovery. Now that we have a real American president in Joe Biden and Vice President Kamala Harris.

As for Oscar Leeser, Makes NO SENSE! why he is running again?

El Paso's job market will never recover under Oscar Leeser, as he will make

business go away and more job loss of potential jobs relocating to the city.

A vote for Dee Margo is a Vote For El Paso's progress and recovery.

Slum. Just because Oscar Leeser is of Mexican decent, people in El Paso will vote for him. And not for what is best for El Paso it's children and it's future.

Oscar Leeser MUST HONOR the Will The El Paso Voters from the 2012 Quality Of Life Bond Issues. He Has No Honor! but for Max Grossman.

I love that editorial comment in the El Paso Inc from Ann Morgan Lilly!