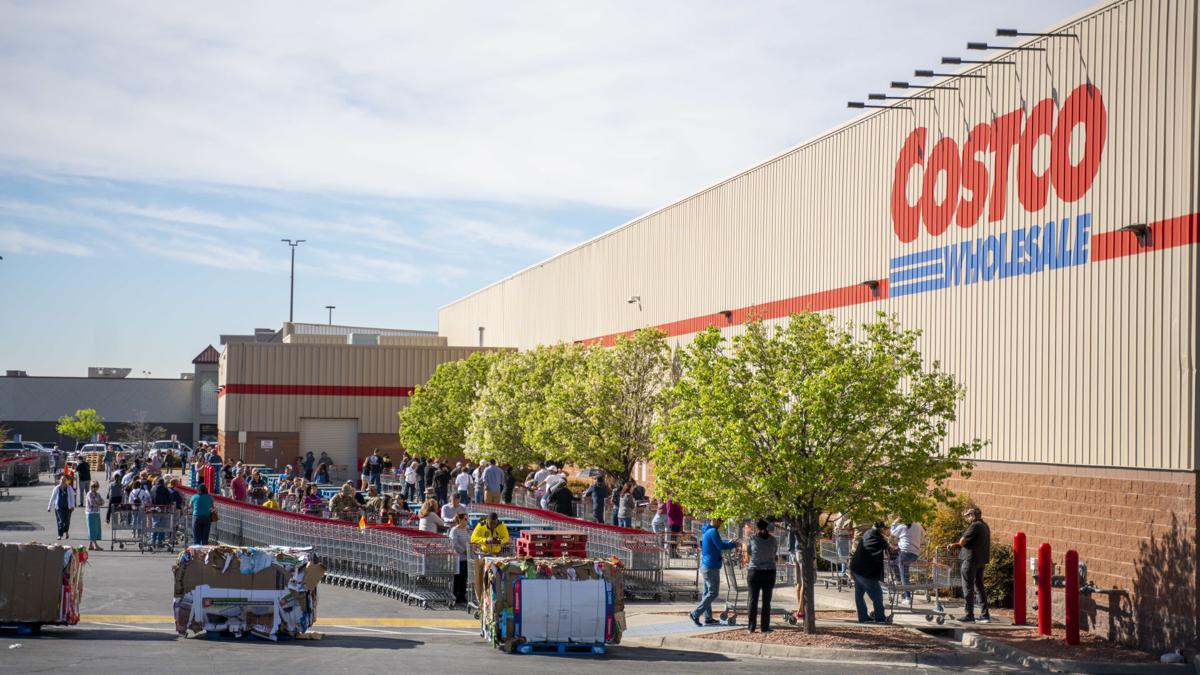 Customers line up outside of Costco before opening on March 25.

The change in foot traffic above and below the baseline average for Jan. 1, 2018 to April 15, 2020 at the Fountains at Farah shopping center in East-Central.

The week of March 9 it was confirmed: The coronavirus had come to El Paso. The city reported its first COVID-19 case, a state of emergency was declared and the pandemic was no longer a distant worry.

Although it was another couple of weeks before the city and county issued stay-at-home orders, that is also the week when the panic shopping started as El Pasoans cleared shelves of toilet paper, according to location analytics company, Placer.ai.

The company analyzed real-time foot traffic at area Albertsons grocery stores and Walmart Supercenters, as well as Cielo Vista Mall, the Fountains at Farah shopping center and Costco for El Paso Inc. The data paint a more precise picture of how the dual health and economic crisis has impacted some of El Paso’s most popular shopping destinations as stores rode the initial wave of panic shopping and crash that followed.

Traffic at grocery stores followed a pattern with visits growing year over year and building to a steep peak in March as panic shopping started.

On the Eastside, the Albertsons grocery store at 11320 Montwood saw a 23.6% rise in traffic in March over the baseline average, just as the Westside store at 3100 N. Mesa made a double-digit jump, according to Placer.ai. The stores were busier that month than even the holiday shopping months.

But the binge was short-lived. By the first week of April, the Montwood location saw a 10.2% decrease in traffic below the baseline average, and the Mesa location saw a 13.5% drop.

The company uses mobile data from devices to analyze customer behavior for retailers and other businesses.

It’s no surprise that Cielo Vista Mall and the Fountains at Farah saw traffic plummet in late March after many El Paso businesses were ordered to close by the city and county in an effort to slow the spread of the highly contagious coronavirus.

But the positive trends at the malls prior to COVID-19 hitting the U.S. mean, “with the right strategies in place, (they) could be positioned well for inevitable reopening,” Placer.ai reports.

Both malls showed no signs of slowing down before the pandemic.

Unlike many of the stores at Cielo Vista Mall and the Fountains at Farah that had to be shuttered due to orders closing nonessential businesses, Costco and Walmart remain open.

At the Walmart Supercenter at 10727 Gateway West, visits for the week of March 9th reached 14.3% above the baseline average, a 19.3% increase from the previous year. That same week, Costco saw a massive 36.8% increase in year-over-year visits as shoppers piled flats high with botteled water and toilet paper.

“While the increases are incredibly impressive during such a tumultuous period, it also shouldn’t come as a surprise as both of these retailers are hot spots for stockpiling,” Placer.ai reports. “But, as we move into April, we do see visits decreasing, though much of this centers around the decision of these retailers to self-impose restrictions.”

I feel that things will eventually get better,once Donald Trump is gone in January 2021.