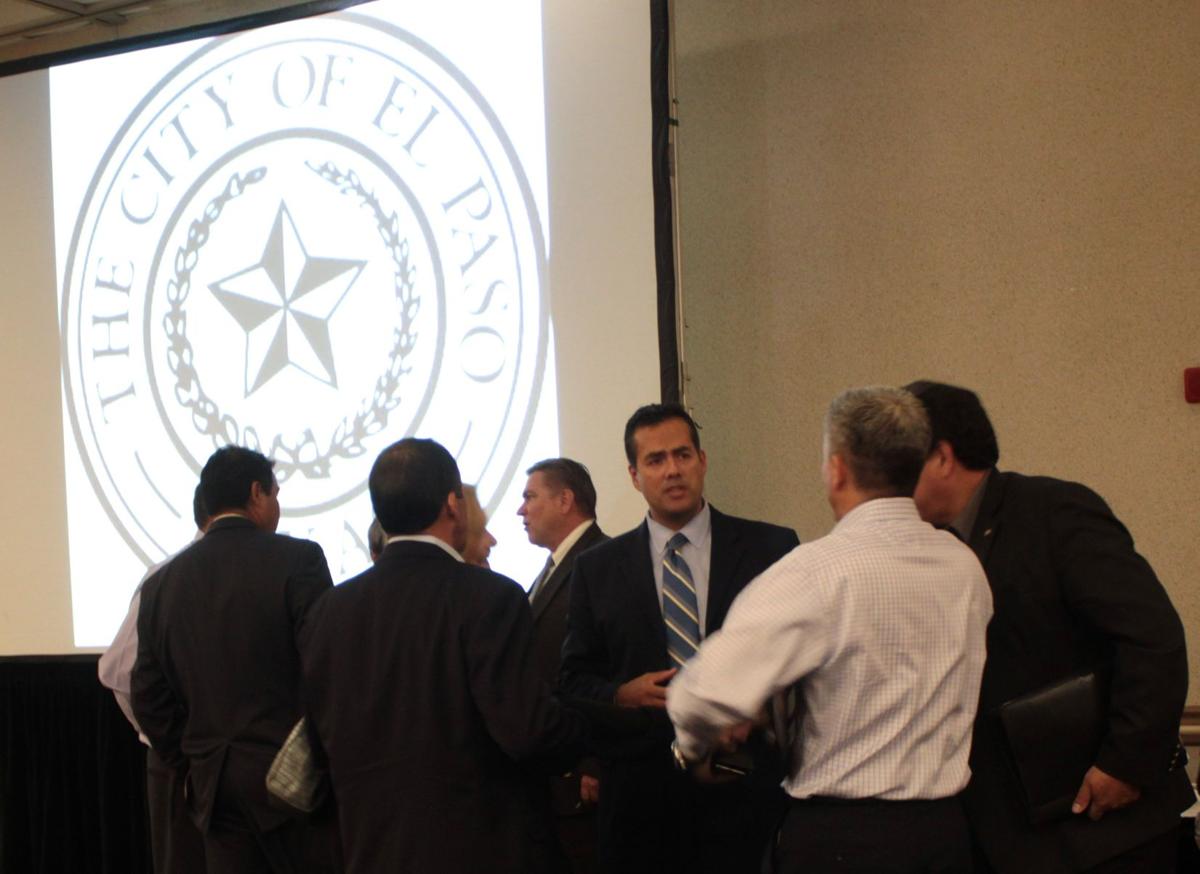 City manager Tommy Gonzalez, center, speaks with engineers and owners of contracting companies during last week’s briefing by Freese and Nichols, a national consulting and engineering firm. The company found the city has had significant problems in project management and technical expertise for years. 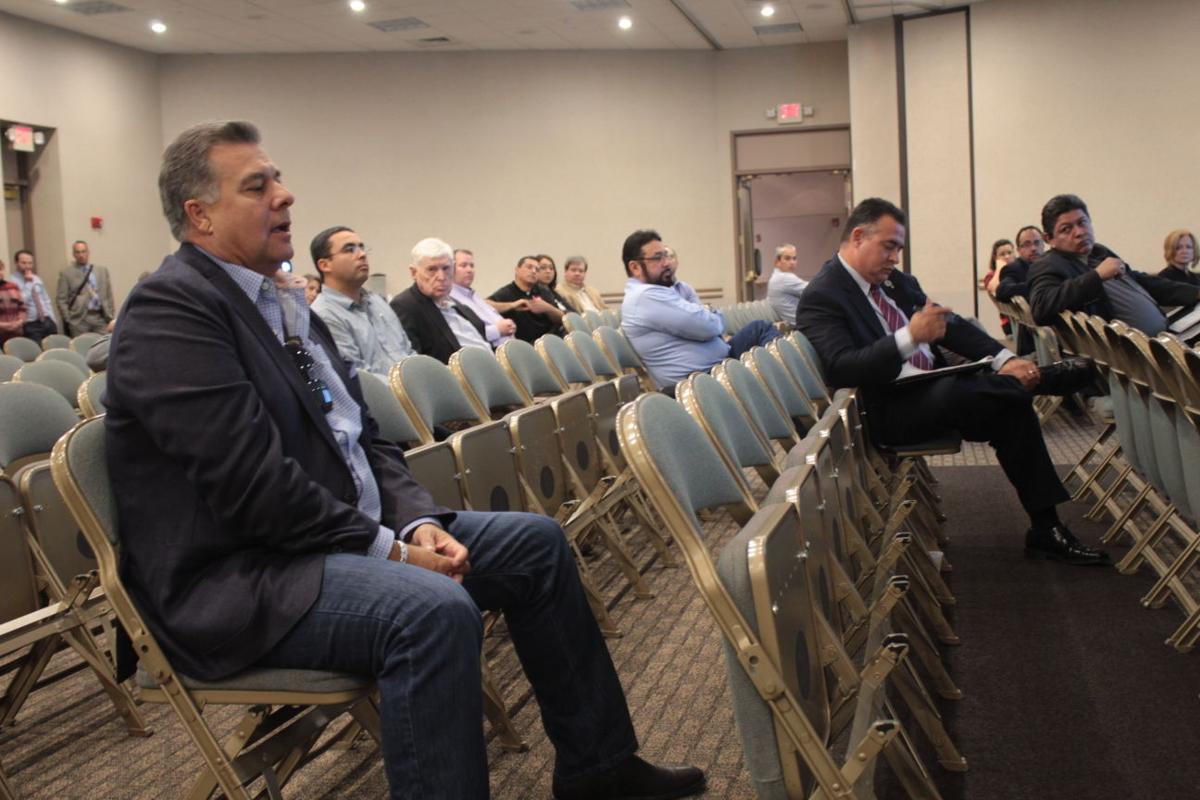 Joe Rosales, owner of JAR Concrete, at the Freese and Nichols presentation. He said his company has repeatedly run into conflicts between what the city expects and what the state demands.

City manager Tommy Gonzalez, center, speaks with engineers and owners of contracting companies during last week’s briefing by Freese and Nichols, a national consulting and engineering firm. The company found the city has had significant problems in project management and technical expertise for years.

Joe Rosales, owner of JAR Concrete, at the Freese and Nichols presentation. He said his company has repeatedly run into conflicts between what the city expects and what the state demands.

Engineers and contractors had a lot to say about City Hall’s shortcomings in the areas of competence, contracts and cooperation at a briefing last week that examined the problems plaguing city-funded projects.

Freese and Nichols, a national engineering, design and consulting firm, reported on a laundry list of problems it found in the engineering and management of every kind of construction project.

Their bottom line: Significant problems in project management and technical expertise that existed for years resulted in a crisis at City Hall when faced with millions of dollars in bond and street projects.

And new issues came up Tuesday night when Freese and Nichols engineer Alan Greer finished his presentation in front of an audience of about 25 people and then asked for questions.

Joe Rosales, owner of JAR Concrete, a company that does a lot of business with the city and state, said the city’s specifications for transportation projects are old, inadequate and incompatible with those of the Texas Department of Transportation, TxDOT.

He said JAR recently completed three city jobs funded by TxDOT but repeatedly ran into conflicts between what the city expects and what the state demands.

“We met with TxDOT about two weeks ago,” Rosales said. “They told us, ‘Why are you following city specs?’ I said because they’re the owners of the project. They said, ‘You need to follow our specs.’”

He also said city projects are often poorly planned and then too tightly budgeted, leaving contractors little leeway when problems arise that should have anticipated.

That forces the contactors to “chase change orders,” Rosales said, referring to additions to contracts that take time and cost more money.

When problems are found, Rosales said, the city is anything but quick to react. “It takes forever,” he said.

In addition, he said, the city’s standard contract is one-sided.

“You want a team atmosphere?” he said, addressing city manager Tommy Gonzalez. “It’s got to be a fair contract, and it’s a very unfair contract.

Rosales complimented the depth of the Freese and Nichols analysis.

“But, we still need leadership to make it all go,” he said.

Gonzalez said he wants to see the city rely on outside technical expertise from El Paso to get the quality of life projects done.

Engineer Roman Bustillos, president and CEO of Brock & Bustillos, said that might reveal yet another problem – not at City Hall but in the community.

He recalled talk of a “brain drain” that came up around the year 2000 with the documented departure of technical talent, saying that was followed by the exodus of contracts that went to out of town companies.

“In the meantime, the local consultants sat on the bench looking at these projects getting done,” he said.

“Now we have another quality of life project here, and the lessons we should have learned each time before have gone by the way,” Bustillos said.

Bringing in outside expertise to help City Hall with projects would help by replanting that kind of expertise, he said.

Generally, Freese and Nichols found the city had significant problems well before voters approved the $473-million quality of life bond issue in 2012, the same year that City Council approved $216 million in street projects.

The increased demands of those projects – coupled with changes in top management at the city, the Municipal Planning Organization and TxDOT – created a crisis at City Hall.

Gonzalez, who hired Freese and Nichols to do an overall analysis and a second firm, HNTB, to delve into transportation issues, said he is ready to do what’s necessary to get things moving.

That includes pushing ahead with the Downtown quality of life projects – an arena, children’s museum and Hispanic cultural center.

The city is seeking a private sector company to select the best site for the $180-million arena and to manage the project.

“We have got to get beyond the fact that in 2012, they didn’t budget for inflationary increases, they did not budget for the operation and maintenance of those projects.

“We have to get beyond that; tell the council straight up this is what it’s going to cost.”

The good news is many projects do go smoothly, Gonzalez said, and the city is committed to correcting problems and creating competence by reorganizing and hiring experts to oversee things until the city is capable.

That will include the third-party management of quality of life bond projects, street work and transportation projects involving the El Paso Municipal Planning Organization and TxDOT.

Freeze and Nichols recommended that the city have the private-sector management of its comprehensive improvement projects and engineering services in place in 90 days and that it commit to an intense one-year improvement program.

In all, the projected cost of projects the city is looking at is $1.3 billion.