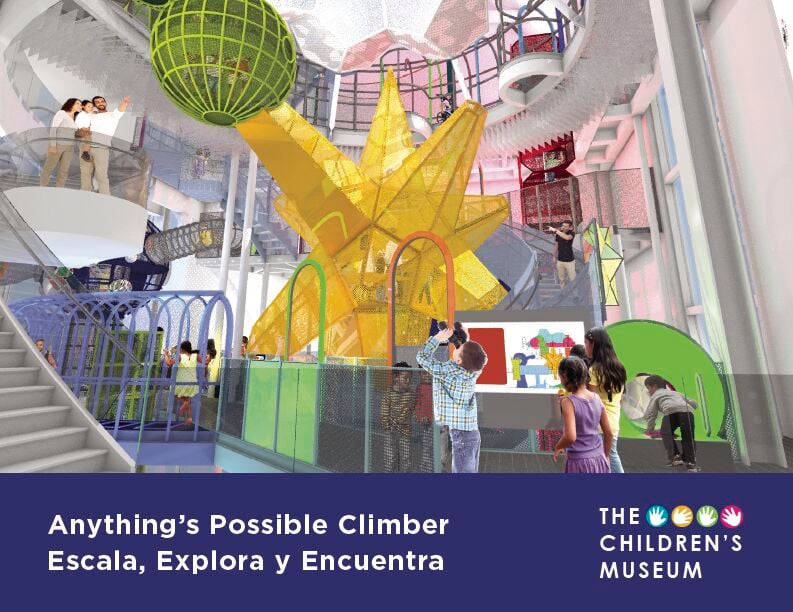 The Anything’s Possible climber goes from the second to fourth floors. 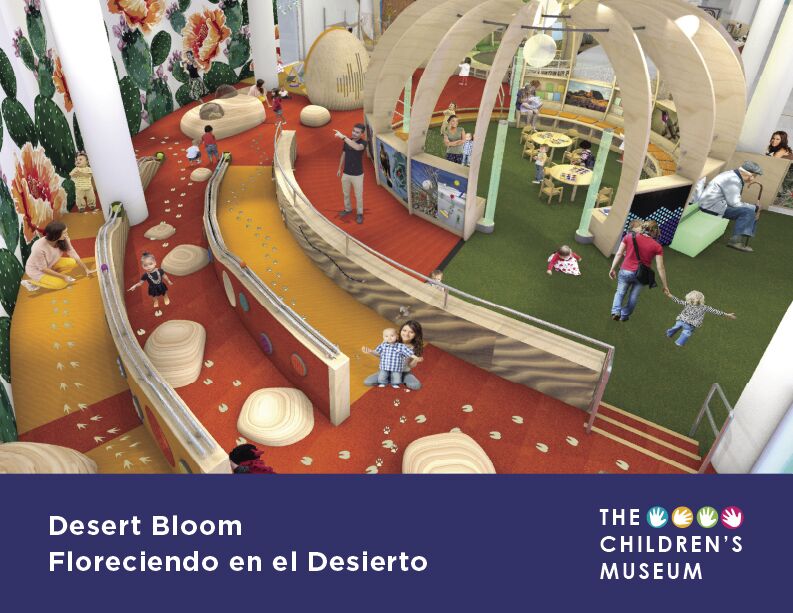 Desert Bloom, a space for the museum’s youngest visitors 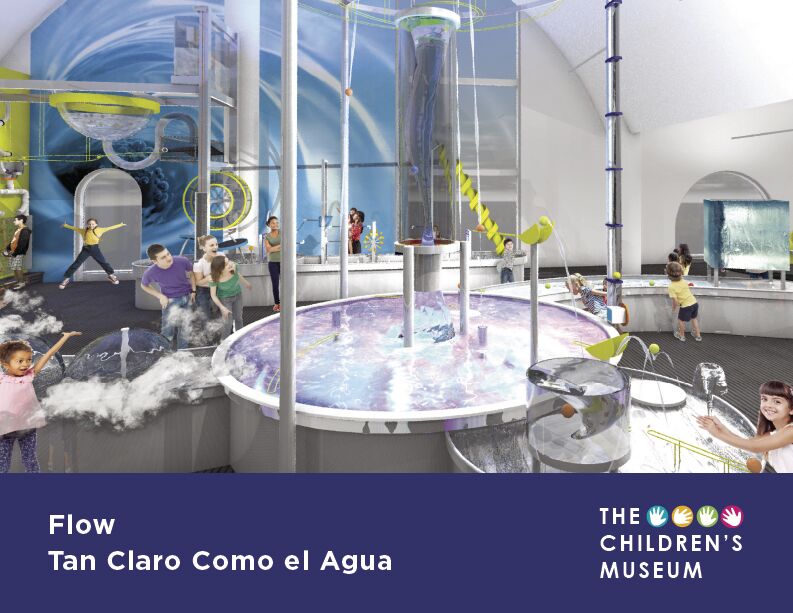 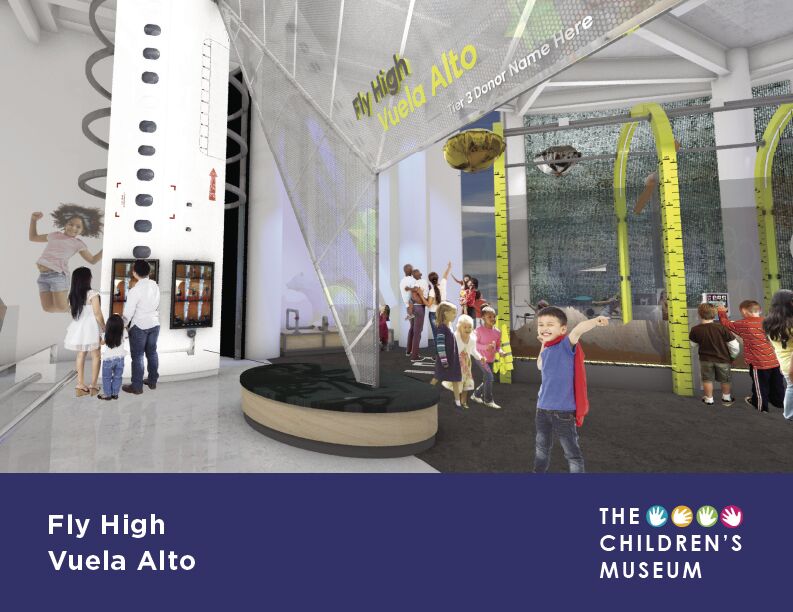 Design, build and launch paper airplanes in a giant test flight path over the Franklin Mountains in Fly High. 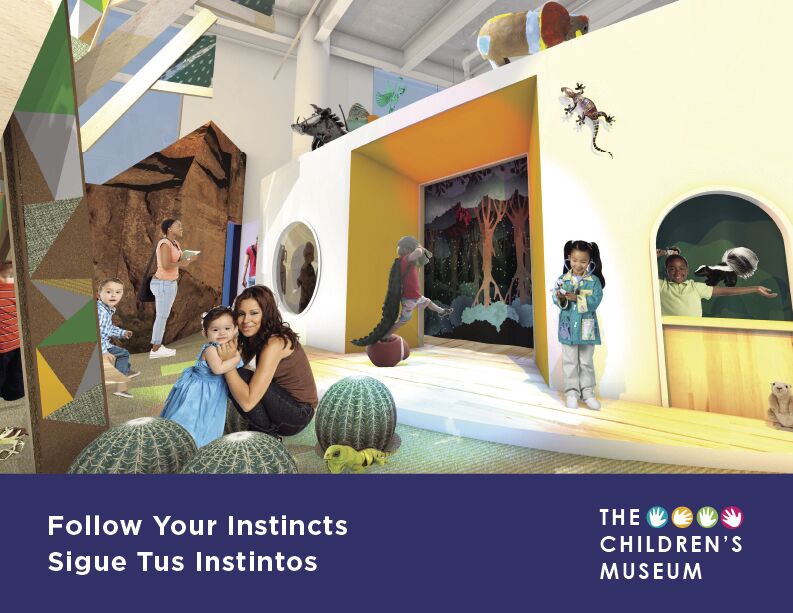 Targeted to ages 4 to 7, this zone invites children to explore animals through dramatic role play, and to think about careers with animals. 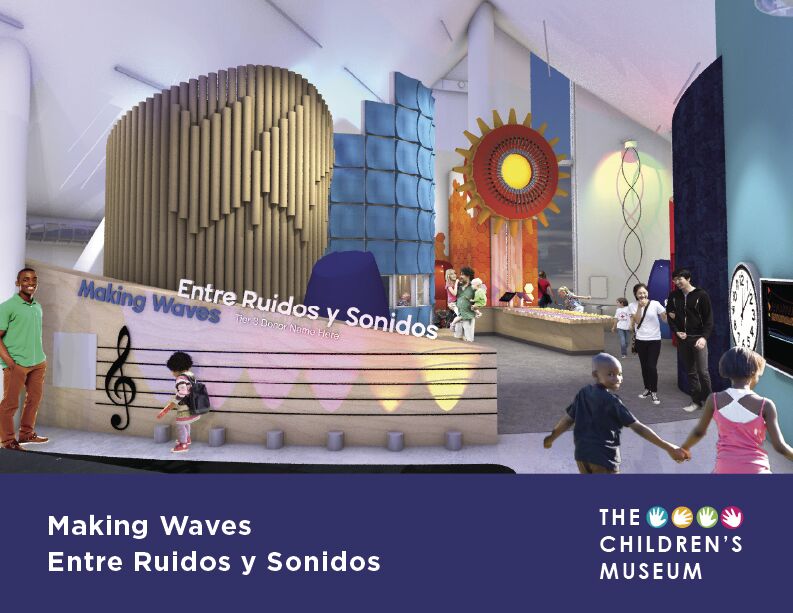 The Anything’s Possible climber goes from the second to fourth floors.

Desert Bloom, a space for the museum’s youngest visitors

Design, build and launch paper airplanes in a giant test flight path over the Franklin Mountains in Fly High.

Targeted to ages 4 to 7, this zone invites children to explore animals through dramatic role play, and to think about careers with animals.

El Pasoans got their first look on Thursday at what will be held inside the walls of the El Paso Children’s Museum.

Project leaders from Gyroscope Inc., an Oakland, California-based firm that designs museum exhibits, were on hand at a virtual tour to introduce the community to what’s being planned.

Officials unveiled eight of the nine exhibits that will be housed in the El Paso Children’s Museum. The final exhibit will be released at a later date.

Tim Phillips, principal at Gyroscope and lead designer on the El Paso exhibits, said a museum can have a powerful impact on a child’s life.

“It’s often a sort of first-time they have their eyes opened to something or control something at a scale not normally at their grasp,” Phillips said.

The eight exhibits that were revealed are:

The Anything’s Possible climber, a 50-foot interactive climber that goes from the second to the fourth floors

Big Skies, where kids can learn about weather, meteorology, architecture and renewable energy

Desert Bloom, a space for the museum’s youngest visitors, inspired by the Chihuahuan Desert

Follow Your Instincts, where children ages 4 to 7 can learn about animals and careers in caring for animals

Making Waves, where kids can learn about sound waves, music and instruments

Flow, where visitors can learn about water treatment and recycling

Challenge It, where visitors can explore engineering and design, including 3D printing

In addition to the partnership between the city and the El Paso Community Foundation, the museum has also partnered with other local groups to enhance the exhibits.

The museum is working with El Paso Water for the Flow exhibit, and with FabLab for the Challenge It exhibit, officials said.

Stephanie Otero, vice president of operations at the El Paso Community Foundation and interim executive director of the El Paso Children’s Museum, said they are also working with the Ysleta Del Sur Pueblo and with the University of Texas at El Paso.

UTEP is doing audience research development, and their early child development department is providing input on how to make each exhibit accessible for small children, Otero said.

“UTEP was very helpful in looking at those pieces and giving insights into science,” Otero said.

The exhibits designed by Gyroscope will mostly be built outside of El Paso, Phillips said.

He added that FabLab, a local nonprofit that works to provide broader access to digital fabrication tools like 3D printing and laser cutting, is involved in creating what will be in the museum.

Thursday’s tour was held virtually, with renderings that show colorful and bright spaces at the future museum, which is slated for completion near the end of 2022.

Phillips said the coronavirus pandemic has impacted travel and he wishes he could have been in El Paso for the unveiling, but that otherwise the Gyroscope and El Paso Children’s Museum project leaders have been able to keep up communications virtually.

“We’re looking at ideas of flexibility and future change,” Phillips said. “It’s more important than ever to create an institution that’s nimble and flexible and can transform into what the community needs.”

Phillips said museum officials have also been doing outreach to the region’s school districts and is putting out a call for artists to collaborate on the projects.

The museum has a price tag of about $70 million, which includes 2012 quality of life bond funding and private fundraising.