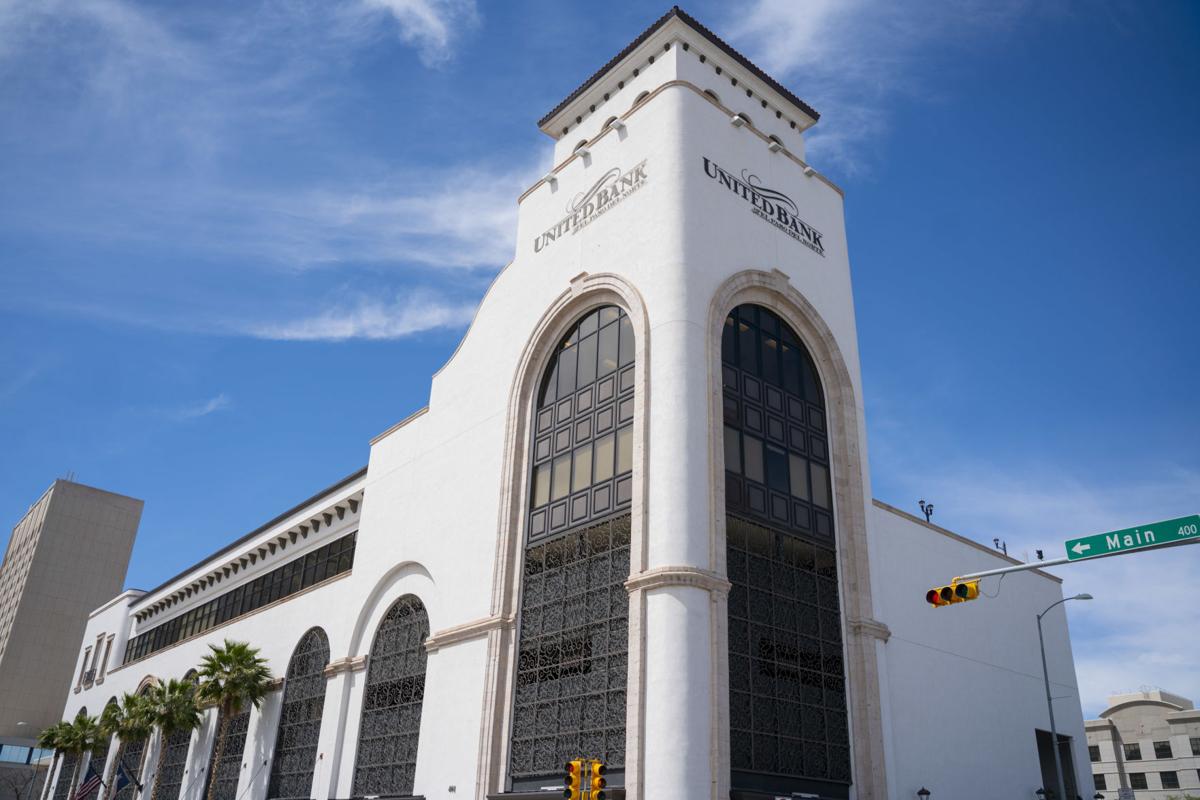 United Bank of El Paso del Norte moved its headquarters to Downtown in 2013 after investing $12 million to transform a rundown parking structure into a modern office building. 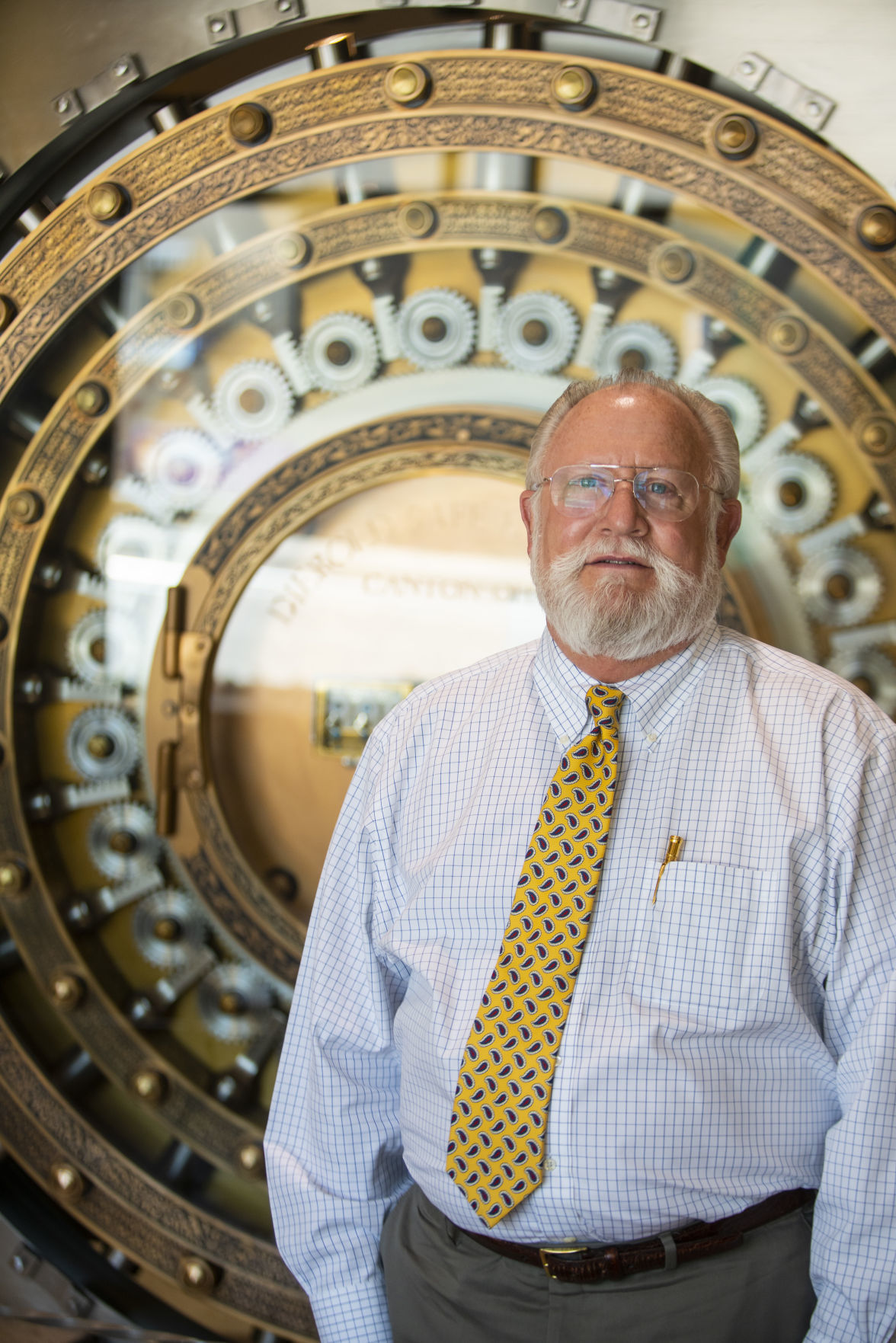 Les Parker, the previous CEO of United Bank of El Paso del Norte who retired last year. Behind him is an old vault door on display in the bank’s headquarters that’s estimated to weigh 20 tons. The late 1800s Diebold compression-style vault door and frame was discovered in a basement that belonged to a building that once housed the old Southwest National Bank in Downtown.

United Bank of El Paso del Norte moved its headquarters to Downtown in 2013 after investing $12 million to transform a rundown parking structure into a modern office building.

Les Parker, the previous CEO of United Bank of El Paso del Norte who retired last year. Behind him is an old vault door on display in the bank’s headquarters that’s estimated to weigh 20 tons. The late 1800s Diebold compression-style vault door and frame was discovered in a basement that belonged to a building that once housed the old Southwest National Bank in Downtown.

In a move rarely seen in the banking world, the shareholders of United Bank of El Paso del Norte are revolting against the bank’s board of directors and senior executives, starting with the president and CEO, Monty Rogers.

The revolt is led by half a dozen longtime investors who are unhappy about the lack of any dividend payments to shareholders in the Downtown bank’s 20-year history.

They’re also upset about the refusal by the board and executives to inform shareholders about the multiple offers made in recent years to buy United Bank’s shares and the bank itself.

“We are members of a group of shareholders who have lost all confidence in the current board of directors of Southwest United Bancshares Inc.,” their March 17 letter to United Bank’s 400 shareholders begins.

The group has called a special shareholders meeting on April 3, not to replace the bank’s eight-member board, but the board of the Southwest United holding company that oversees the bank board.

Right now, the same eight people sit on both boards, and that’s the big problem, said one of the concerned shareholders’ leaders, Mike Verlander, the owner of multiple restaurants in El Paso and an original United Bank investor.

Last summer, Verlander said, there were rumors that the board had gotten several offers to buy the bank’s stock, the highest being nearly $39 a share.

Verlander said, “I asked our president, Monty Rogers, if that was true, and he said, ‘We can’t talk about it.’ And then he turns around and says, ‘We’re paying $25 a share right now if you want to get out.’

“I told him I know the bank’s worth a lot more than that, and he says, ‘That’s what we’re offering.”

Verlander said after being denied other basic information, including minutes of board meetings, shareholder Patsy Parker wrote to United Bank’s chairman, Hank Hernandez, asking for a list of shareholders along with copies of bank board minutes and received a letter from an Austin attorney saying that information was not available.

“Can you imagine?” Verlander said. “You ask for information that by state law they’re required to give us, and they stonewalled us.

“Does that sound like a board of directors that we want to have running our company?”

At the scheduled April 3 meeting, both sides will be armed with proxies allowing them to cast votes for shareholders who aren’t present.

“We’re trying to get as many shareholders to vote in person or by proxy as possible, and hope we get a 51% vote to change the board,” said Mark Barnett, longtime general manager of Barnett Harley-Davidson and United Bank investor.

He thinks the meeting will take place despite the spread of the coronavirus because so many shareholders will be represented by their proxies based on their shares that others who are present will use to vote.

The current board and its supporters would be well-armed with shareholder proxies as well.

Monty Rogers, the bank's president and CEO, said many of the issues Verlander, Barnett and others are raising have been addressed since the bank’s previous CEO, Les Parker, retired last year.

“We were surprised to get that information because it hadn’t been brought up in the past,” Rogers said. “As far as transparency goes, the shareholders have gotten more information the past six months than they ever received before.”

As for the purchase offers that didn’t make it to the shareholders, Rogers said, “The board of directors is responsible for reviewing any of those offers.”

In the case of the $39 offer, he said, “We consulted with professionals and an evaluator, and we felt like that was not a fair price for the stock.”

A $32.36 per share offer made by the bank to shareholders March 5 that doesn’t expire until April 9 was in direct response to complaints from longtime investors who wanted something substantial after years of no returns, Rogers said.

“The $32 is a price for a minority shareholder,” he said. “We had the stock appraised and it appraised at $26 to $32, and our board, in my opinion, was very generous in offering the higher end of that appraisal.”

Monty said the other issues the concerned shareholders are raising will be addressed in the coming days and noted that this is a poor time to be having such a debate, given the economic disruption that the coronavirus is causing.

Hernandez said he finds humor in the complaints.

“This issue about mistrust, enmity and lack of transparency, it’s ironic in that (former CEO Les Parker) was pretty much running the bank up until about July,” Hernandez said. “I guess what I find humor in is that there is more transparency with the current board than there ever has been.

“We have been more transparent with shareholders. We’ve been sending up-to-date emails and propose to continue that. United Bank shareholders have gotten more communication than they ever had in the last 18 years.”

When it comes to the $39 per share offer from another bank, Hernandez said he’s “appalled” at the position the concerned shareholders have taken because approving that offer would have meant the sale of every share and the end of United Bank in El Paso.

“Its original mission was to be a local bank to make business loans,” he said. “We struggled with that – how to offer liquidity while at the same time staying on the original mission of United Bank.

“I think we are there, and I am proud to be part of that process. That $39 would not have done right for our shareholders, and the community would have one less community bank. That’s what drove us.”