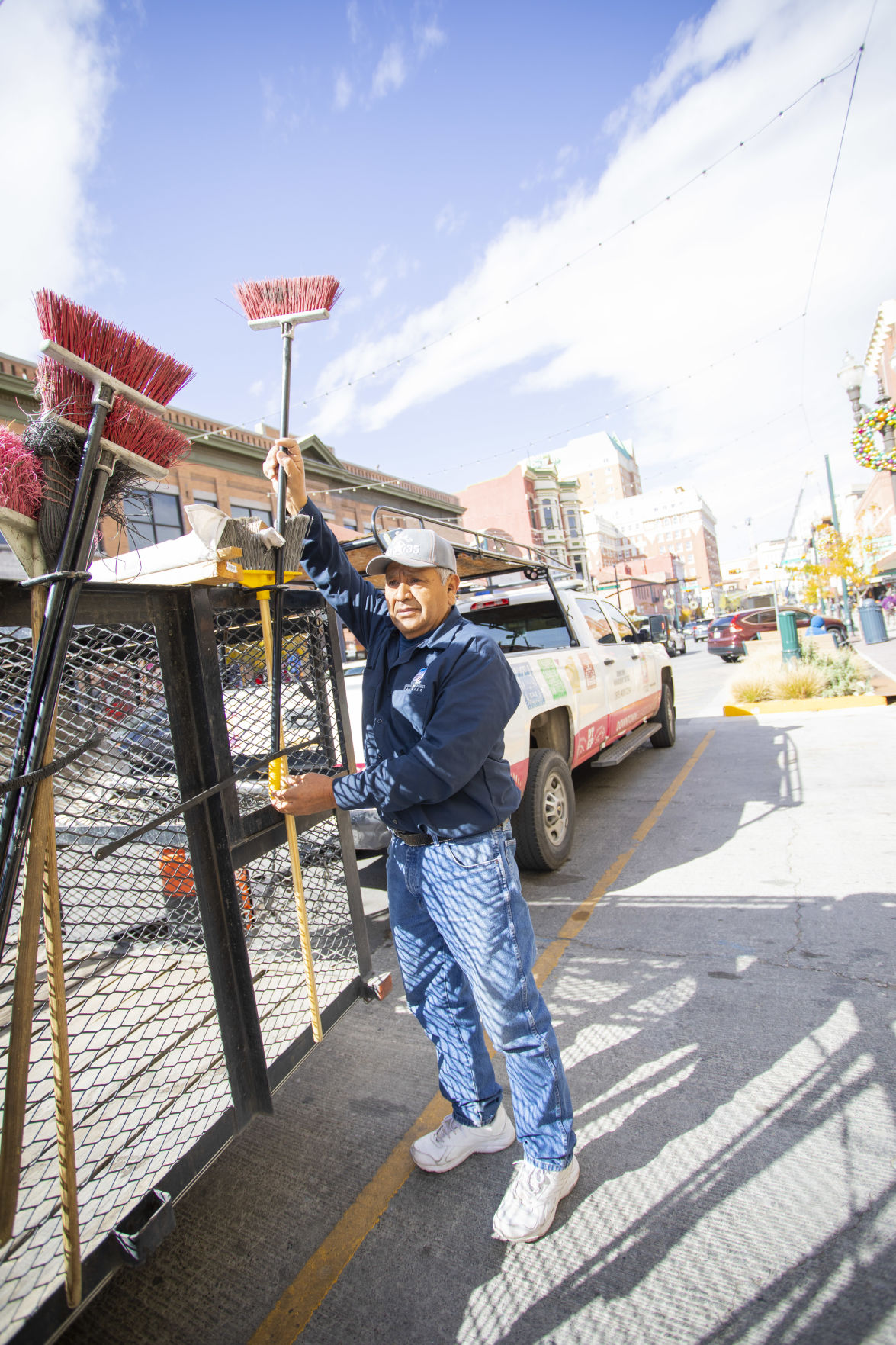 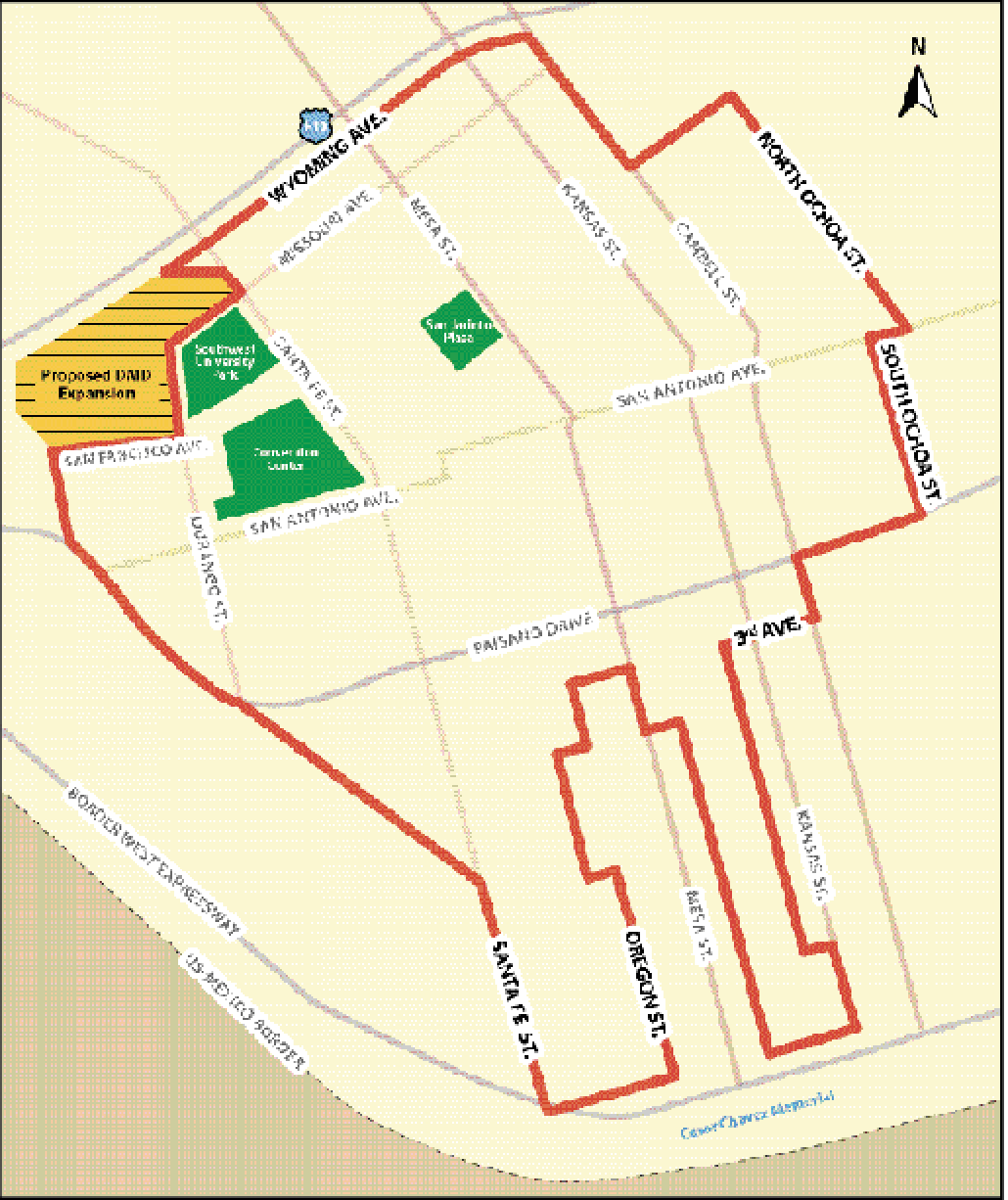 The current boundaries of the Downtown Management District, in red, with the proposed expansion, which encompasses the Old San Francisco area.

The current boundaries of the Downtown Management District, in red, with the proposed expansion, which encompasses the Old San Francisco area.

This Thursday, the Downtown Management District board may consider petitions from property owners to bring seven-acres next to the ballpark into the DMD, making the area eligible for DMD grants and services.

But to be eligible for consideration, the proposed annexation needs support from property owners whose combined properties are worth more than $3 million, or half the value of properties in the area targeted for annexation.

As of Friday, the value of the properties that the annexation petitioners own in the DMD comes to $2.2 million. That’s 37.5% of the $6 million value of all 39 properties in the area they’re seeking to annex.

It includes the Later, Later and Blackbird bars, the new Franklin Avenue Apartments and the Old San Francisco Historic District.

If the petitioners don’t make it this year, they could, with DMD board approval, continue seeking property owners’ support into next year.

“The burden is on the petitioners in favor of the annexation,” said Joe Gudenrath, the DMD’s executive director. “If they don’t succeed in getting enough owners on board this year, the annexation would have to wait until Jan. 1, 2021.”

The DMD is popular among Downtown business owners because, in return for the 11-cent per $100 valuation assessment on their property taxes by the district, the area gets a lot of attention.

In addition, businesses in the DMD are eligible for facade improvement grants of up to $25,000.

“Our grant program is one of the most valuable tools at their disposal,” Gudenrath said. “So if you’re only paying $300 a year in assessment, that grant covers you for a long time.”

The DMD’s budget this year is $922,501, some of which comes from event expenses and handling special event permits for the city.

Two facade improvement projects underway now with DMD support are the former J.C. Penney building at 324 E. San Antonio and a three-story building at 108 S. Stanton that’s being converted to residential use on upper floors.

The DMD had an open house recently to give property owners in the Old San Francisco area a presentation on what the DMD does and what their inclusion in the district would cost in taxes.

Only one person attended, Rudy Alarcon.

He owns two houses next to Later, Later, and has, with his neighbors, waged a campaign against the late night noise from the patio bar.

Partly due to his complaints, City Council adopted a new noise ordinance this year. It exempted the DMD from the ordinance’s noise restrictions, but that exemption doesn’t apply to venues in the new area proposed for annexation – if it goes through.

One of only a few homeowners in the area, Alarcon opposes the annexation because the DMD’s services are tailored to businesses, but he would still have to pay the additional 11-cent tax per $100 on his properties’ values.

“I guess it’s a good service, but in the end, it is another of the government choking us to death on taxes,” he said.

Renard Johnson, owner of the Franklin Avenue Apartments, has a similar view and is OK with the services he has – without paying for more. He is the lone eligible property owner who has signed a petition of opposition to the proposed annexation.

“First of all, I don’t really understand the DMD, their purpose or what they do.” Johnson said. “I’m sure a lot of downtowns have downtown management districts.

“However, when you build apartments, especially like the ones I did, your margins are very thin. So you’re going along just fine for two years, and then someone pops up and has the ability to tax you again?”

Johnny Escalante, co-owner of Later, Later and a member of the DMD board, is leading the support for annexation.

“As a property and business owner, you pay taxes and with the DMD, it’s almost like you get the best thing for your buck,” he said. “You can see the tax dollars at work.

“That’s why I’m a big fan of the DMD and why I’m supporting this expansion. I’ve seen what they do. I think with the growth of Downtown, I don’t want ballpark-west to get left out.”

But Tanny Berg, a former chair of the El Paso Central Business Association and a founder of the DMD, has had run-ins with the district and opposes the annexation.

“I can tell you, I will not agree to it,” he said. “Originally, we were very careful not to take in residential properties, and I don’t know if people who pay taxes will be willing to do that.

“It’s good for commercial property owners, not for residential. I hadn’t heard about this until now. Has anyone notified the other DMD participants, and do they have a consensus that they’re willing to expand the district?”