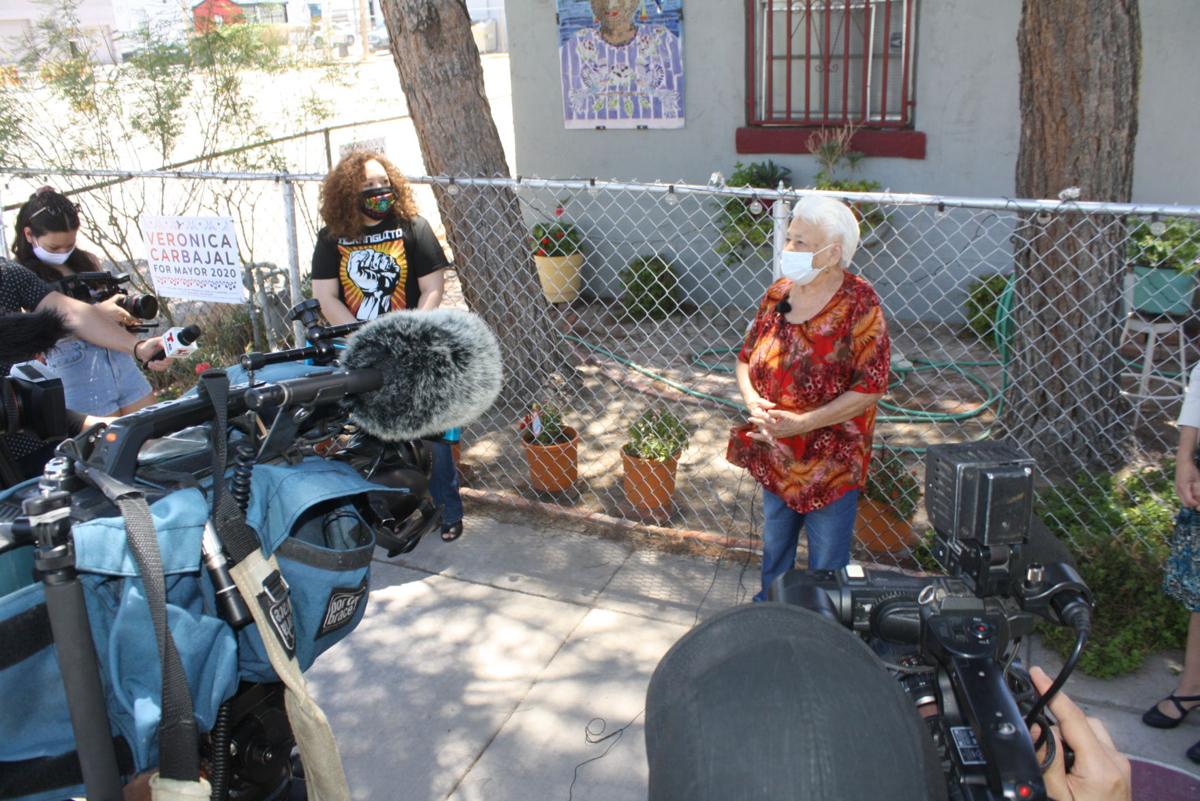 Antonia Morales speaks outside of her house at a news conference Friday. She is one of the last residents of the Duranguito neighborhood, where the city plans to demolish buildings to make way for an arena. 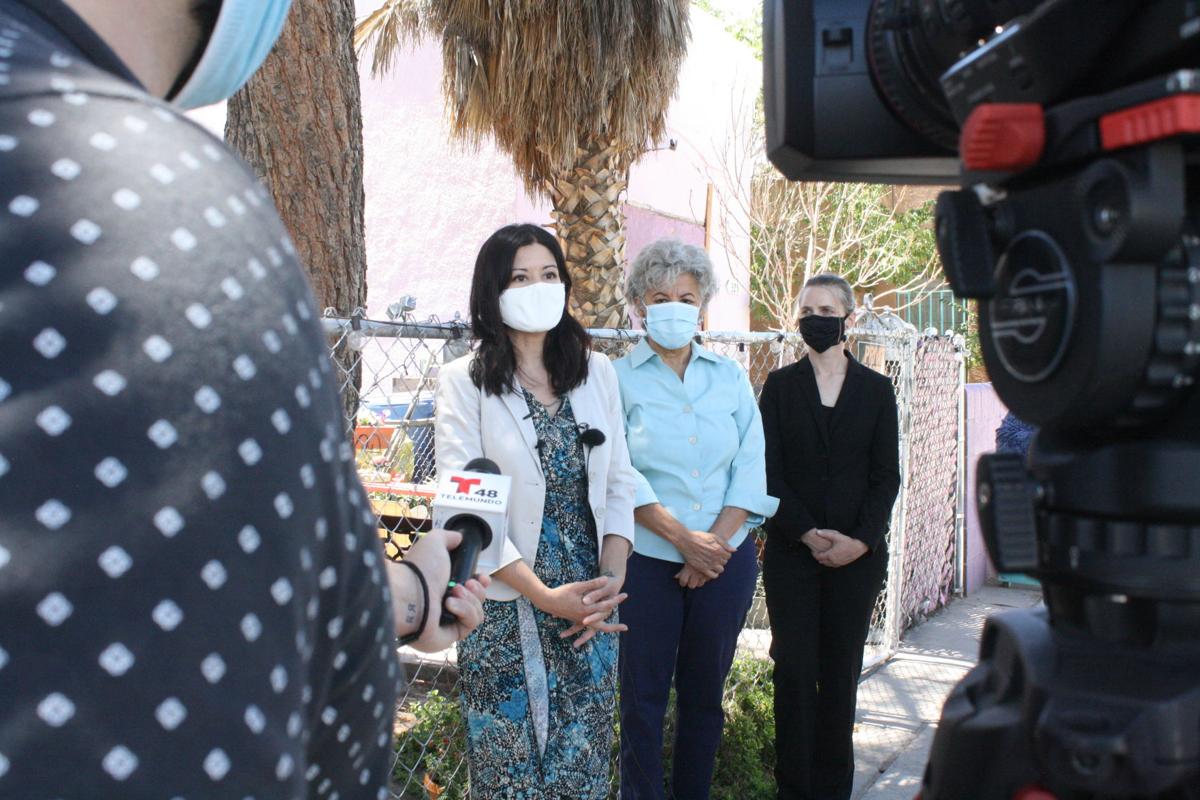 ‘We are not in a financial position to continue to provide subsidies to the wealthy. We simply cannot,’ Veronica Carbajal said at a news conference Friday. Carbajal is an attorney with Texas RioGrande Legal Aid who represents some former and current residents of Duranguito.

Antonia Morales speaks outside of her house at a news conference Friday. She is one of the last residents of the Duranguito neighborhood, where the city plans to demolish buildings to make way for an arena.

‘We are not in a financial position to continue to provide subsidies to the wealthy. We simply cannot,’ Veronica Carbajal said at a news conference Friday. Carbajal is an attorney with Texas RioGrande Legal Aid who represents some former and current residents of Duranguito.

The opponents of the city’s efforts to build an arena in Downtown’s historic Duranguito neighborhood may have suffered a final legal defeat at the hands of the Texas Supreme Court.

At issue was the adequacy of the language on the ballot in the 2012 bond election and whether it told voters they were not just deciding on a multipurpose performing arts and entertainment center but on an arena for sports, particularly professional basketball.

A state district judge ruled that the language was not clear enough. In 2018, a state appeals court overruled the decision of the Austin judge. The Texas Supreme Court upheld the appeals court decision.

Opponents of the arena asked the Supreme Court to reconsider and mounted arguments about the importance of the ballot language on a bond proposition, which had been upheld before.

But the Supreme Court side-stepped those arguments and simply declined to review the initial appeals court decision.

The verdict came in a single word Friday morning: “Denied.”

“I am pleased with the Texas Supreme Court’s decision,” El Paso Mayor Dee Margo said in a statement issued Friday.

“We have one more legal proceeding to clear the path to building the Multipurpose Center, but this is a long awaited step in the process to fulfilling the will of the voters,” Margo said.

He is the UTEP professor who has waged the very expensive legal battle with help from J.P. Bryan, a retired Houston oilman and avowed preservationist, who has spent well over $1 million on the fight.

“What I care about is that, in doing this, you are going to destroy the birthplace of El Paso,” Bryan said Friday. “You will distinguish yourself by being the only city in the United States that has ever done that.”

The final legal decision remaining in the case now rests with the state’s Eighth Court of Appeals in El Paso.

At issue is what type of archaeological excavation must be done in Duranguito before any demolition takes place in an area widely considered to be the birthplace of El Paso.

However, if the local appeals court were to decide that the state’s historical archaeological excavation plans were adequate, there is yet another impediment – a new one.

Because of the COVID-19 pandemic and the revenue shortfall the city expects, chiefly from the drop in sales tax receipts, City Council approved a proposal to put a hold on the Multipurpose Performing Arts and Entertainment Center, or MPC, and the Mexican American Cultural Center projects.

Margo himself has conceded that the MPC the city wants and needs could not be built for the $180 million the city included in the bond proposition for the project, and it would likely cost at least $250 million.

The council approved that proposal on April 28.

Then, there are the city elections in November in which the mayor and four city representatives are up for reelection.

At a press conference Friday, supporters of the preservation and restoration of Duranguito called on El Pasoans to keep up the fight.

“If this was such a positive endeavor, then you would have had the private sector paying for it in full,” said Veronica Carbajal, an attorney with Texas RioGrande Legal Aid who represents some former and current residents of Duranguito. “We are not in a financial position to continue to provide subsidies to the wealthy.

Carbajal is a candidate for mayor in the November election.

Story updated July 24: A previous version of this story reported that the mayor has said the MPC would now likely cost $450 million. The correct number is $250 million.

I just want to say that first of all, there was never such a place in the city of El Paso called the Durangito. This name was thought of by Max Grossman,and I feel that he purposely made up the name to radicalize. South El Paso in efforts to destroy the will of the 2012 Quality of Life Bond Issues.

As voters then unanimously passed in favor of all 2012 Quality of Life Bond issues by 71%. Time to start work on this long overdue downtown arena, Eight Years is more than enough of stalling the arena project. The more they continue to stall it,the more expensive it gets to build it.

Max Grossman should be handed all the legal cost for it's delay.