A rendering shows what a proposed deck park over Interstate 10 in Downtown could look like. 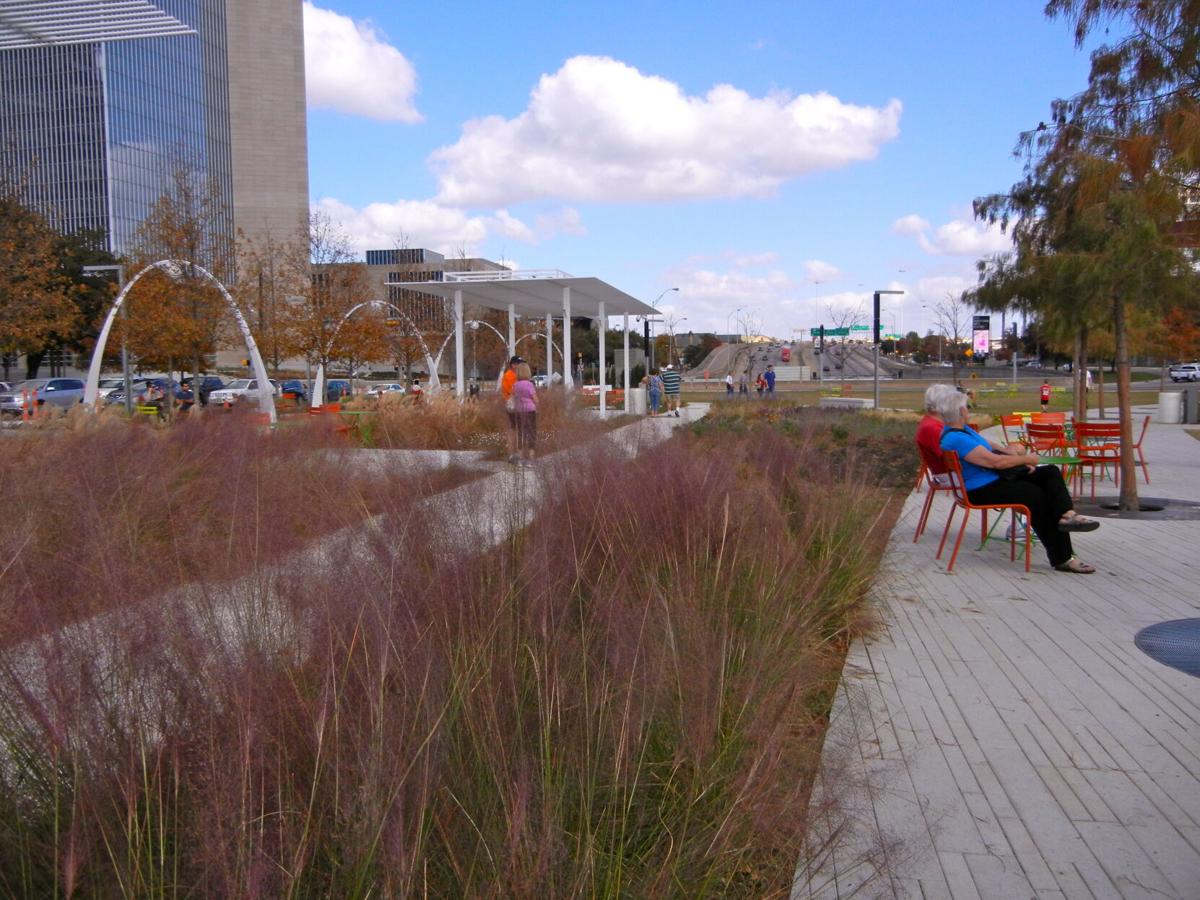 The 5.2-acre Klyde Warren Park was built over Dallas’ Woodall Rodgers Expressway and opened in 2012. Some El Paso community leaders hope to see a similar park built over Interstate 10 in Downtown El Paso.

A federal grant awarded to the city of El Paso has moved Downtown one step closer to getting a park that would be built over Interstate 10, bridging Downtown and the historic Sunset Heights neighborhood.

Supporters of the deck park announced Tuesday that the city was awarded a $900,000 grant from the U.S. Department of Transportation, through the Rebuilding American Infrastructure with Sustainability and Equity grant program.

Funding for the $1 billion RAISE grant program was allocated by Congress in 2020.

“Today, El Paso moves closer toward the goal of expanding our green spaces and creating a public gathering space for all,” said U.S. Rep. Veronica Escobar, in a news release.

“I am proud to have advocated to secure this critical investment as our nation focuses on rebuilding our infrastructure – including roads and bridges – creating good-paying jobs and mitigating the impact of climate change.”

The grant provides funding for a design study. Proponents of the project have eyed the I-10 Downtown corridor, which TxDOT has plans to widen, as a location for the deck park.

“That grant is exceptional from the standpoint that we move to the next level,” said Ted Houghton, a former chairman of the Texas State Transportation Commission and an advisor on the project. “We can start to plan a process where the community has input into the design. We’ll hire a firm that will take that on. It’s a big deal.”

“We’ve been doing a lot of quiet work on this on the political side. The infrastructure bill passed with RAISE grants. Everything’s starting to fall into place but we can’t let up.”

The proposed deck park has not been added to TxDOT’s final plans for the Reimagine I-10 project and would be funded separately. Reimagine I-10 is a multibillion-dollar project that will rebuild much of the interstate from the New Mexico state line to Tornillo.

“We’ve been participating in (TxDOT’s) community outreach process,” said Tracy Yellen, CEO of the Paso del Norte Community Foundation. “We hope to work closely with them through the design and engineering process and for the park to be part of the preferred alternative that TxDOT selects.”

In September, the Texas Transportation Commission added the Reimagine I-10 Segment 2 freeway widening project – which runs from Executive to Copia – to its 2022 Unified Transportation Program, a 10-year plan that lays out the state agency’s priorities.

Yellen said the group was meeting with the city on Friday to get more details on the administrative parts of the grant. She said design and engineering firms have not yet been selected for the project.

While the city applied for the grant, Yellen said the foundation provided a lot of the information that went into the proposal and hopes to be involved in the community input process. The foundation also created the Deck Park Plaza Foundation to help steer some of that process, Yellen said.

“Designers, engineers and the community will further refine the footprint and amenities included in the space,” Yellen said.

Additionally, as part of the grant, the foundation has committed to raising matching funds, Yellen said.

Deck park supporters have eyed the Klyde Warren Park in downtown Dallas as a model for what El Paso’s project could look like. Proponents have said the park will reconnect surrounding neighborhoods with Downtown, a connection that was lost when I-10 was built in the ’50s and ’60s.

Opponents of the project have raised concerns about the deck park because of its association with the highway widening project. They worry about the impact widening the highway will have on the surrounding neighborhoods and pollution levels, as well as the possibility of private property acquisition by the state.

Houghton, who chairs the El Paso Mobility Coalition, said there are more opportunities for the deck park project to pursue federal funding. They include the $1.5 billion in RAISE grants in the Infrastructure Investment and Jobs Act signed into law in November.

Houghton said deck park advocates have met with Washington officials and have made presentations to departments like the Federal Highway Administration.

“We’ve been doing a lot of quiet work on this on the political side,” Houghton said. “The infrastructure bill passed with RAISE grants. Everything’s starting to fall into place but we can’t let up.”

The deck park would be great without the widening of I-10. El Paso has way too much freeway. Plus, didn't they just finish building Border Express? TxDOT will keep expanding and adding freeways until all of Texas is just one large freeway.

The I10 Deck Plaza will become the cherry on the cake when it gets built.

I'm more than sure that Max Grossman is doing his homework to see if he can derail it. He'll come up with some mischievous lie with claims that El Paso's first Neanderthals. Camped there over 30,000 years ago.