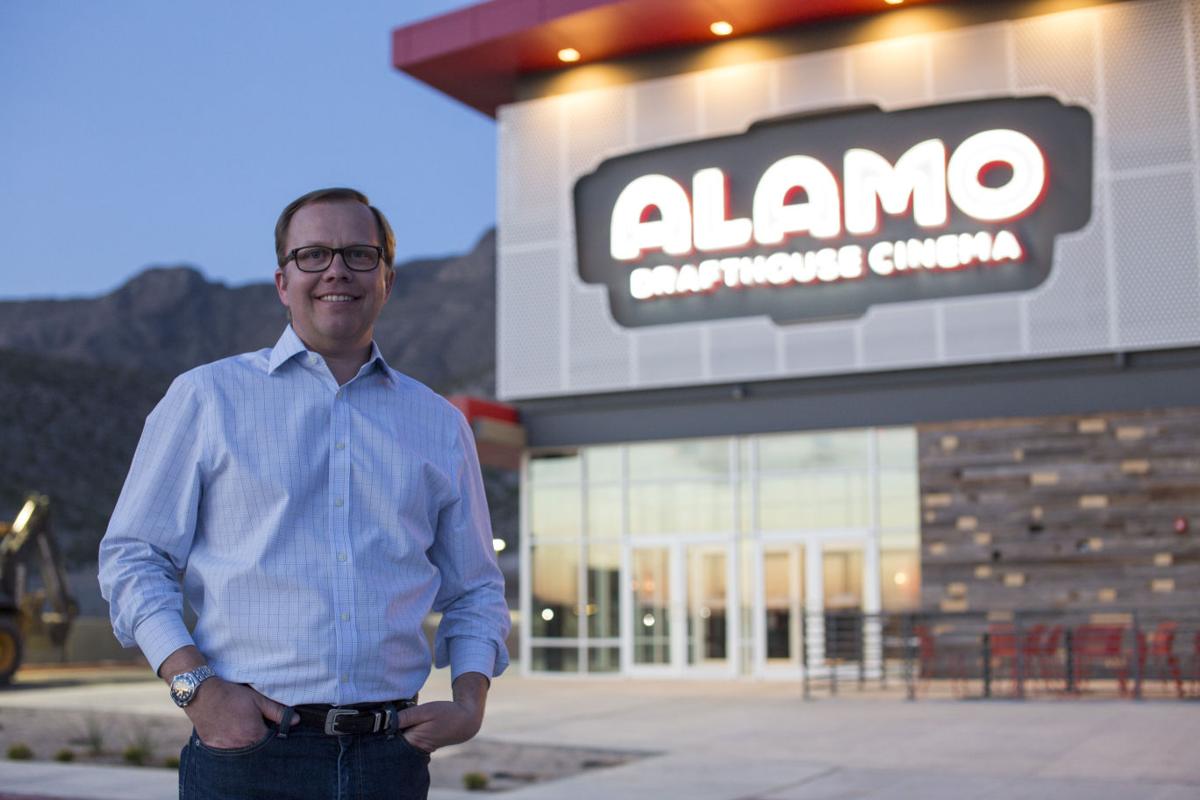 Alamo Drafthouse Cinema opens May 6 in West El Paso, operated by Neil Billingsley-Michaelsen, CEO and president of Triple Tap Ventures. This is his third Drafthouse. 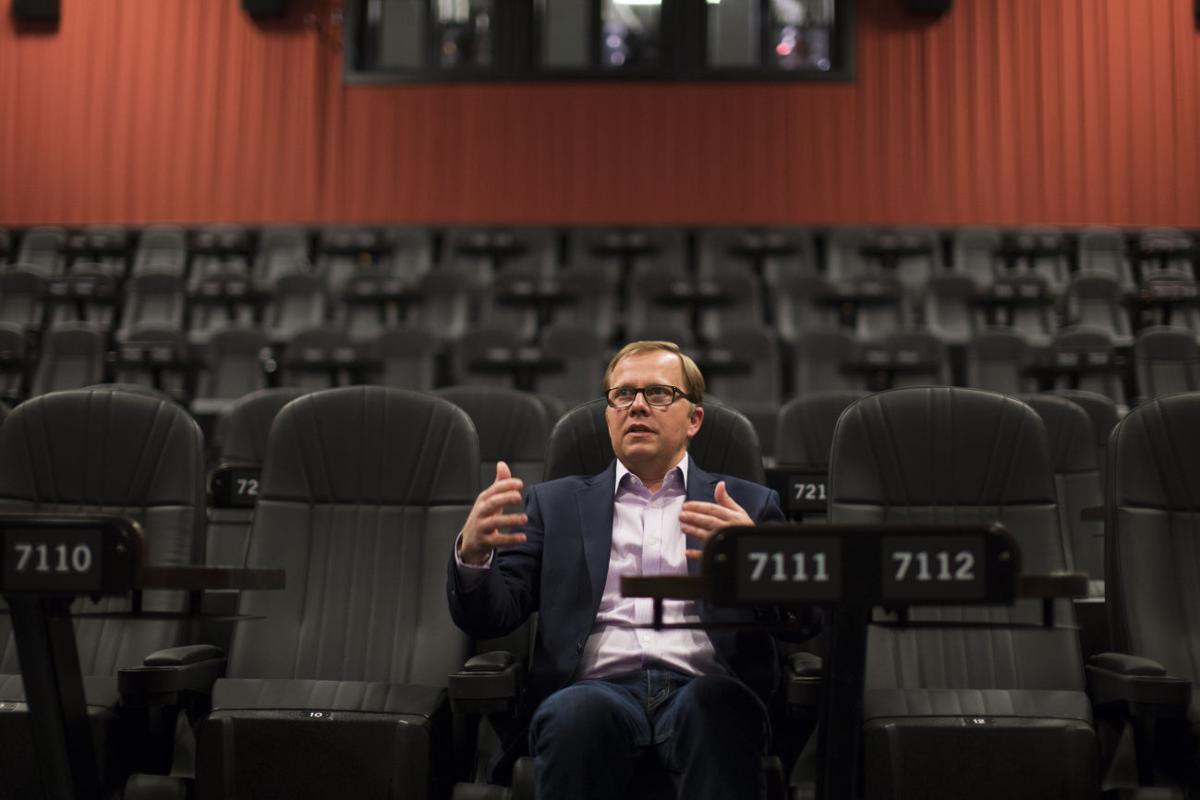 Billingsley in one of the Drafthouse’s 145-seat theaters. A wide aisle in front of each row allows ‘ninjas’ to discretely fetch and deliver orders during a movie without bothering the audience.

Alamo Drafthouse Cinema opens May 6 in West El Paso, operated by Neil Billingsley-Michaelsen, CEO and president of Triple Tap Ventures. This is his third Drafthouse.

Billingsley in one of the Drafthouse’s 145-seat theaters. A wide aisle in front of each row allows ‘ninjas’ to discretely fetch and deliver orders during a movie without bothering the audience.

The long-awaited opening of the Alamo Drafthouse Cinema will be welcomed by people who really like movies – and by those who look at El Paso’s growing list of attractions and see opportunity.

Alamo Drafthouse officially opens May 6 with the first-run film “Captain America: Civil War,” and three of the day’s eight screenings are already sold out.

But you can get an early look inside the complex during its soft-opening training days April 25 to April 28, when tickets are $2 for a list of popular movies.

It’s been a long time coming for Neil Billingsley-Michaelsen, CEO and president of Triple Tap Ventures LLC. This is his third Alamo Drafthouse.

“I wish we could have opened earlier, but I think at the end of the day this is going to work out very well,” said Billingsley.

His company has the Alamo Drafthouse franchise for Houston and West Texas. It operates theaters in Lubbock and Houston, and soon, Sugarland.

Amenities at Alamo Drafthouse theaters include big comfortable seats, deliveries of food and drink in the dark, and movie trailers and short film features before the feature presentations.

The complex that Banes General Constructors is finishing up at 250 E. Montecillo Dr. in West El Paso has seven, 145-seat theaters and one with just 35 seats. They’re all equipped with the industry’s newest 4K digital projectors.

As he gave El Paso Inc. a tour, Billingsley pointed out that the 145-seat theaters are nearly square, not rectangular like other theaters, and they have only half the seats as a traditional theater.

That’s because a wide aisle in front of each row allows waiters called “ninjas” to discretely fetch requests and deliver meals, snacks or drinks during the movie without bothering the audience.

“The screens are big, and there’s not a bad seat in the house,” he said.

Billingsley said people also love that there are never any advertisements on the screen.

“Instead, there’s going to be a preshow playing for 30 to 45 minutes before the move starts. We take clips and curate these into 30-to-45 minute pieces of content that are all tied to the movie.

“So, you can sit here for 30 minutes with a beer and have some really good stuff on the screen without getting bombarded by advertising.”

The complex also has a 35 mm, reel-to-reel projector, which means they can show archival prints. “Some movies are only released on 35 mm, like ‘Interstellar,’” Billingsley said.

Then there’s the Glass Half Full Taproom with 45 beers and wine on tap to hang out in before movies and after. Patrons don’t need a movie ticket to stop in there anytime.

And in case you have not heard, there is no talking or texting after the lights go off. They really will kick you out if you’re caught twice during a movie.

The cinema is part of a 300-acre development that will stretch from a residential community to be built above the Alamo Drafthouse to the tall apartments buildings and restaurants on Mesa, all the way down to Interstate 10.

“Being the anchor for this entertainment district was a great opportunity,” Billingsley said. “It’s part of the overall Montecillo development, which is really visionary.

Montecillo, he said, will be the new anchor for West El Paso, and Alamo Drafthouse will set the new standard for movie going in El Paso.

Richard Dayoub, president and CEO of the Greater El Paso Chamber of Commerce, and Charles Horak, host of KTEP’s “On Film” radio program and a member of the Broadcast Film Critics Association, agree.

“The old theatrical exhibition model, basically the model that all of El Paso’s current exhibitors follow, is in need of an evolution or it will continue to face a steady decline,” Horak said. “Alamo’s brand is predicated on fostering a thriving cinema culture.

Other El Paso theaters, he said, will have to pick up their game.

“Underscore that, underline and put stars all around it because they will,” said Dayoub, a passionate movie buff himself. “This whole concept is just dynamic.”

Alamo Drafthouse may just be another cluster of movie theaters, but Horak suggests it carries extra weight when added to the arrival of well-known retailers like West Elm, the Apple Store and the coming Whole Foods Market. El Paso’s first Dave & Buster’s opened two weeks ago.

Other cities take attractions like those for granted, but many see them as signs that something new is happening in El Paso, a big city with a small town feel that yearns for national recognition.

“Thank goodness El Paso seems to be front-of-the-mind across the country on so many levels,” Dayoub said. “I don’t think it’s accidental, but the result of hard work by a lot of people over many years.

“I think it adds additional credibility to what a dynamic market we are and, just as important, it mitigates some of the negative imagery that people conjure up when you talk about El Paso.”

So would all of those companies and that money come to El Paso if it were really a dangerous city on a lawless border?

“I think that’s all going away,” Dayoub said.

Billingsley went out of his way to praise Bain’s work.

“They have been a phenomenal partner and have done an amazing job with this,” he said, standing in the heart of a 35,000-square-foot complex with construction frenzy outside.

While Alamo Drafthouses tend to look alike, Billingsley said there is room for distinctive differences that set them apart.

He credited the architectural work of 5G Studio Collaborative of Dallas and architect Mike Voegtle for the hundreds and hundreds of hours they’ve spent designing El Paso’s Alamo Drafthouse.

Billingsley comes from a family of show business stars. But after a stint on the daytime soap opera “Search for Tomorrow,” he worked in finance and banking work before deciding the theater business was for him.

Tim League started the Drafthouse chain 19 years ago in Austin, and El Paso’s Drafthouse will be the 24th in the country. Sixteen of those are in Texas.