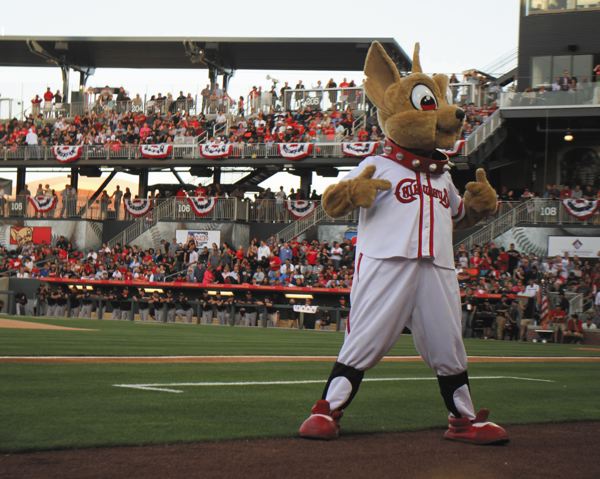 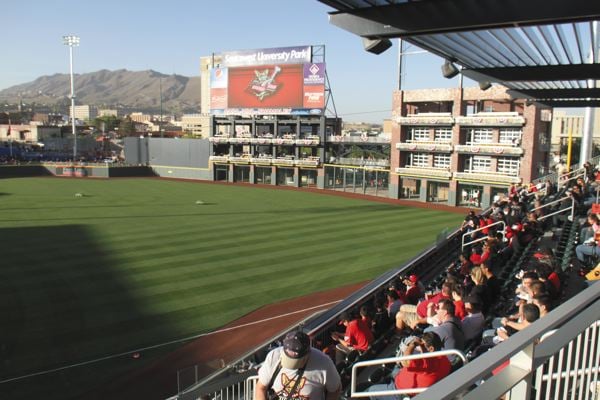 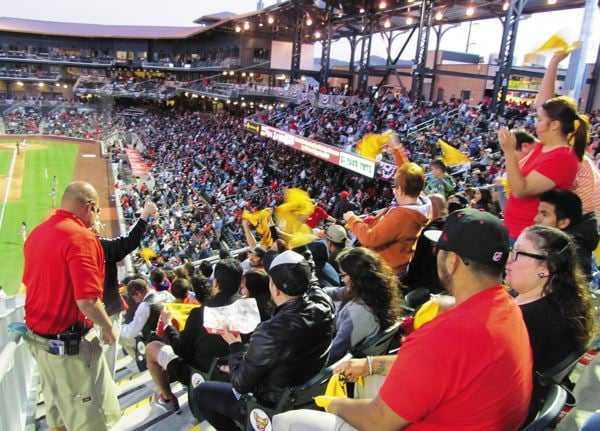 In the highest corner of the stadium’s third base side is Western Refining’s Community Corner. Throughout the season, community non-profits will be chosen to get free seating there. 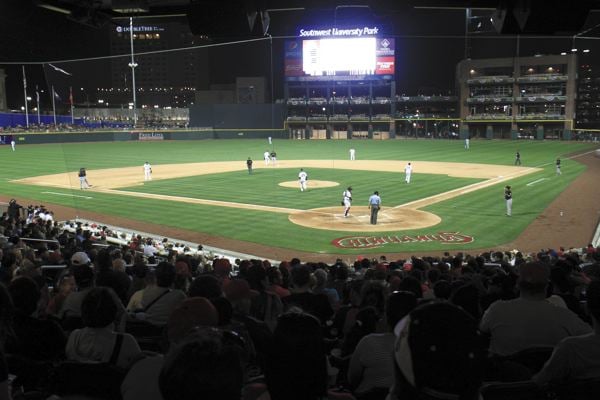 The El Paso Chihuahuas take on the Fresno Grizzlies for their first home game at Southwest University Park. 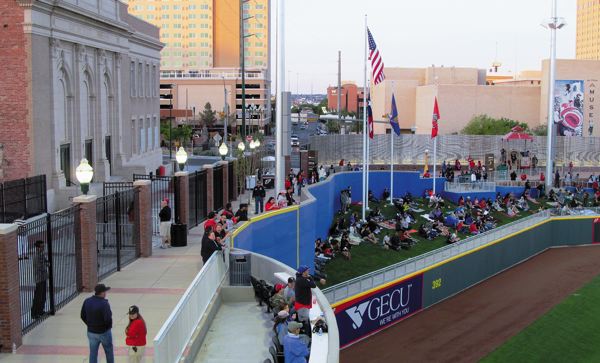 Along the third base line, fans can sit on blankets to watch the game. To the left is the Scottish Rite Temple on West Missouri Street. 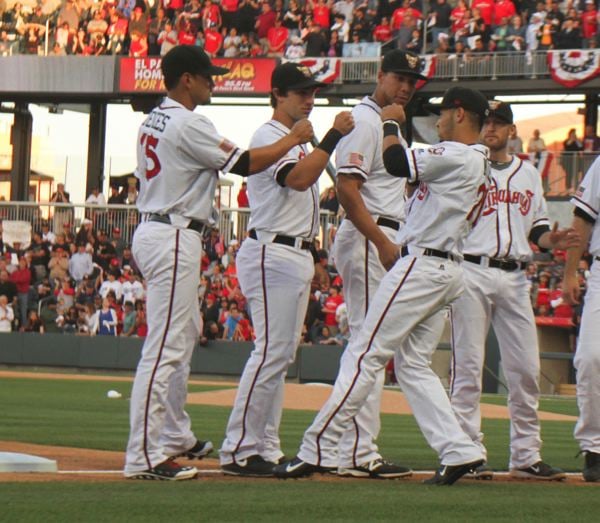 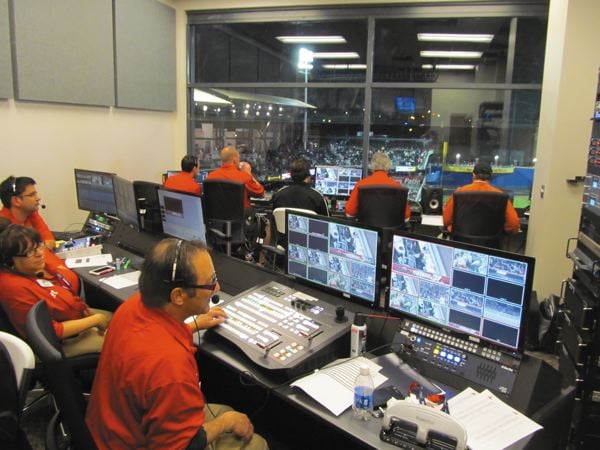 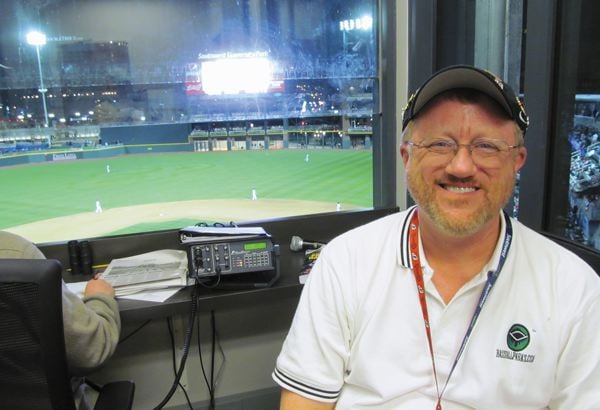 Ballpark blogger Joe Mock says the scale and design of the park are perfect for the site. 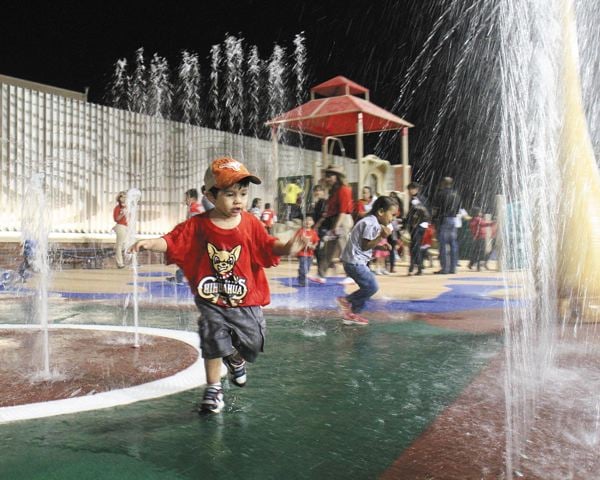 In the highest corner of the stadium’s third base side is Western Refining’s Community Corner. Throughout the season, community non-profits will be chosen to get free seating there.

The El Paso Chihuahuas take on the Fresno Grizzlies for their first home game at Southwest University Park.

Along the third base line, fans can sit on blankets to watch the game. To the left is the Scottish Rite Temple on West Missouri Street.

Ballpark blogger Joe Mock says the scale and design of the park are perfect for the site.

It was a chilly and windy night, but the ballpark was full and the fans were happy.

That would describe the Chihuahuas’ first two home games at Southwest University Park and the advent of Triple-A baseball in El Paso.

So would four losses to the Fresno Grizzlies and three sold- out games in four days.

Although Chihuahuas manager Pat Murphy moaned and groaned about a roster torn apart by trades and tough losses, no one complained about the sale of more than 30,000 tickets.

Nor, it seemed, were there many complaints about parking or El Paso’s not quite finished, $74-million ballpark.

If there was work left undone for the opening games at home, it wasn’t apparent. Everything seemed to be working.

Up in the press box, Austin writer Joe Mock with the website Ballparks.com was taking it all in.

A veteran of many openings and a guy who probably knows his way around most of the professional ballparks in the country, Mock said he was really impressed by El Paso’s new 9,000-seat park.

“It’s a very unique park with very unique features, and it is very much El Paso,” Mock said. “The architects, the team and the Padres who have input here did an en exceptionally good job on this design.

“To fit it into the small space is unbelievable.”

Sitting on a little over five acres, the ballpark that Populous designed is said to occupy the smallest piece of ground of any of the country’s affiliated Minor League Baseball stadiums.

“But these same architects managed to put a major league park in Minneapolis, Target Field, onto a postage-stamp size parcel that I believe was less than nine acres.”

But the home of the Twins has more than 40,000 seats, and like Southwest University Park, it is built up and out, hanging over railroad tracks and streets.

“This is no less miraculous,” Mock said. “Scale is a big thing. The scale of this facility is perfect. It is perfect for this location and for this market and for the number of seats.”

Some say the ballpark – for which El Paso voters approved the sale of $50 million in bonds to be repaid by hotel occupancy taxes – is the most expensive minor league park ever built. But Mock said that’s not even close to true.

“If you count the cost of land, the ballpark Charlotte just built is more, and the highest of all time was Memphis,” he said. “It was more than $70 million when it opened 15 years ago or so.

“I believe this was money well spent. One of the team employees told me this ballpark has changed El Paso forever. I agree.”

Another neat thing about the Chihuahuas’ park, he said, is that it is unique from bottom to top.

“I don’t believe there was any scrap of any blueprint for any other ballpark that they were able to use here,” Mock said. “Everything was done from scratch and in a way that is original, not a copy of anything.”

Mock likened the arrival of Triple-A ball and Southwest University Park to Charlotte, N.C.’s five-week-old BB&T Ballpark in terms of its likely impact on Downtown.

“Charlotte’s ballpark is having a tremendous impact downtown because people are coming for something other than football now,” he said. “They had basketball, football and hockey, but nothing in summer.”

Half an hour before the Chihuahuas second game on Tuesday night, Johnny Ortiz, his big family and friends, 17 of them, were enjoying free hot dogs and hamburgers and cheap beer outside the Black Pearl at the bottom of Durango Street in the Union Plaza Entertainment District.

In front of the grill, manager Rico Torres liked what he saw – a pretty good crowd for a Tuesday night – and hoped they’d be back later. Or the next day, or Saturday.

“We’ll be doing this for every game this season, and even if it doesn’t make it up, it’s something that we’re giving back,” he said.

But Downtown baseball is new to El Paso, he said.

On Tuesday, George Salom, president of Downtown’s Central Business Association, was at the glassy posh bar behind home plate with friends.

He smiled slowly when asked the inevitable question about what it’ll do for Downtown.

“It is a beautiful stadium, well designed, well built,” he said. “And for the real estate that it’s on, I think it’s amazing what they did.

“Will it translate into more business? I think there will be initially a little bit more. But I don’t think it’s going to be something that creates synergy or an epicenter for peripheral business.

“I think it’s going to be minimal. You’re picking up kids after work or school. You meet here, you consume here, you watch the ballgame, and then you don’t stick around. We’ll see.”

Thirty minutes after Tuesday’s game ended, the Black Pearl was closed, and at the end of restaurant alley, The Garden was quiet.

One couple was having drinks at the end of the bar closest to the door.

Manager Craig Byrd said the restaurant and bar would normally have closed at 9 p.m.

He’s betting El Paso will get the hang of Downtown baseball.

“I think it’s kind of new to the folks here in El Paso,” Byrd said. “I think as the summer goes on, people will get used to it.

“It’ll be, like, ‘You know what, let’s go pre-game, have some drinks, have some dinner and go to the park,’ and they’ll realize this whole area is here for entertainment after.

“There’s also the kids factor, and that’s what we’re gearing up for. That’s who we want to attract – the college kids, the 20-somethings, the no-kids crowd,” he said.