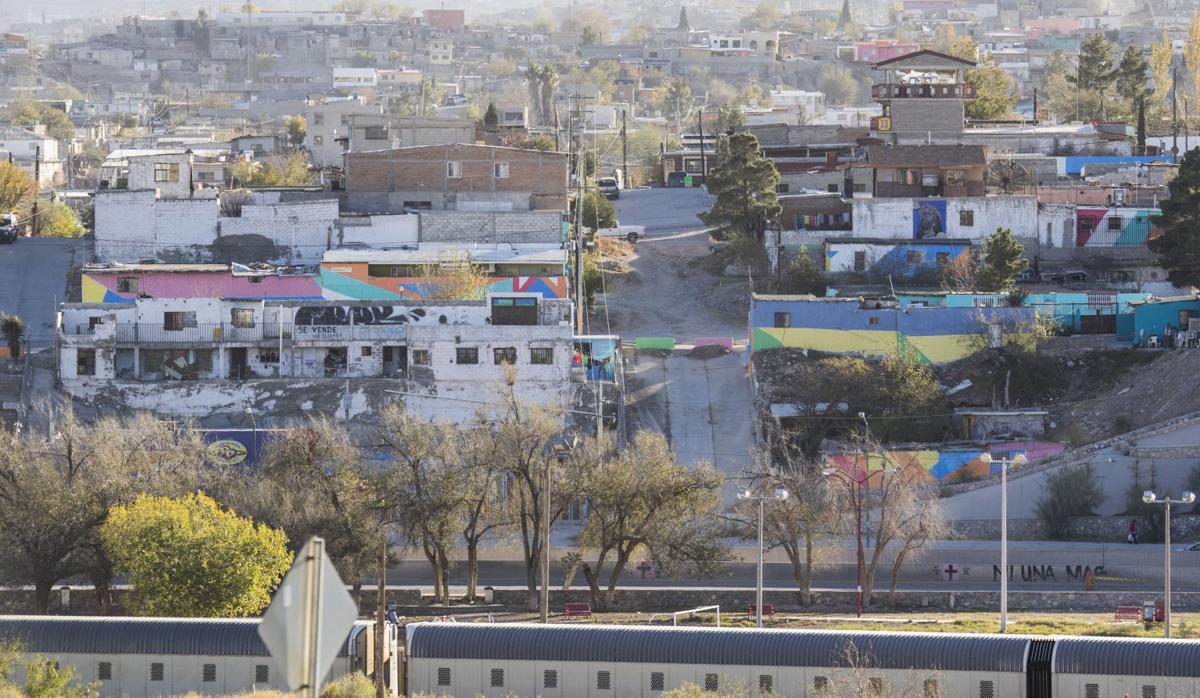 The mural is starting to take shape, as seen from the U.S. side of the border. Amor por Juárez is leading a project that’s painting houses in bright colors. 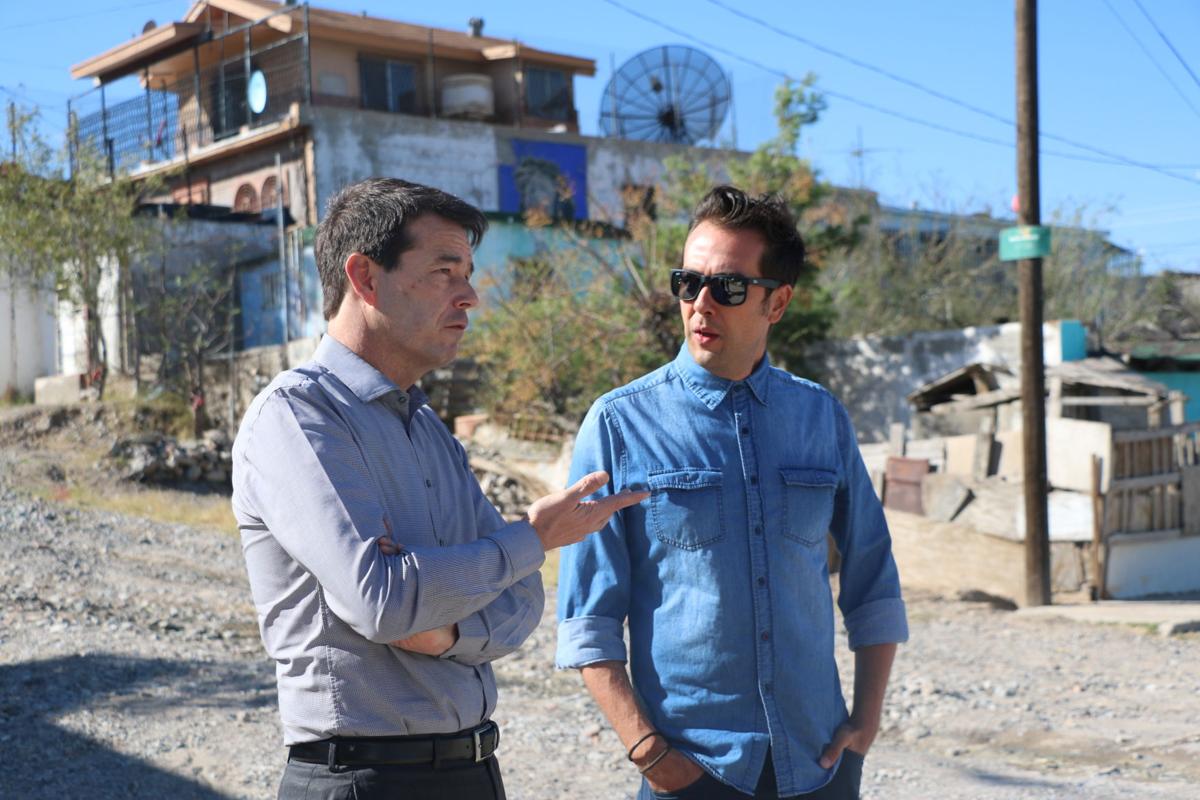 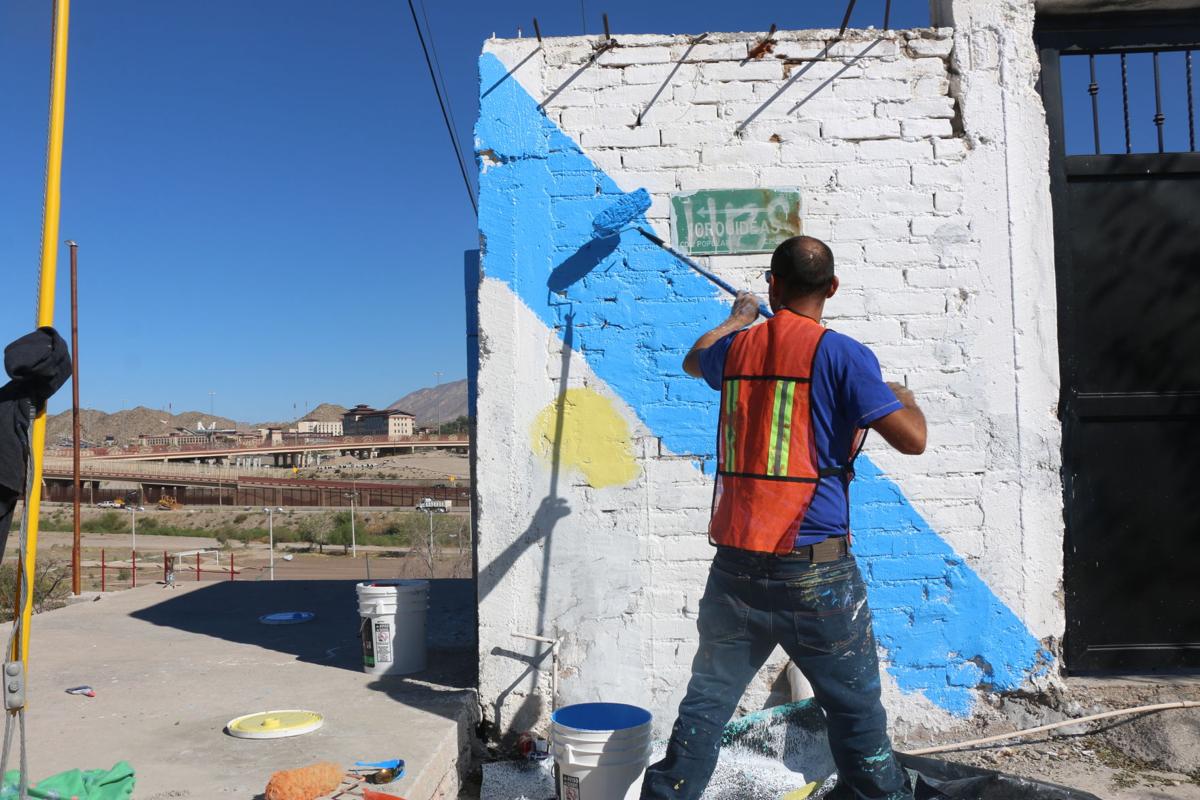 A worker paints a design on a house in Juárez. Bhutanese-style buildings on the UTEP campus can be seen in the distance. 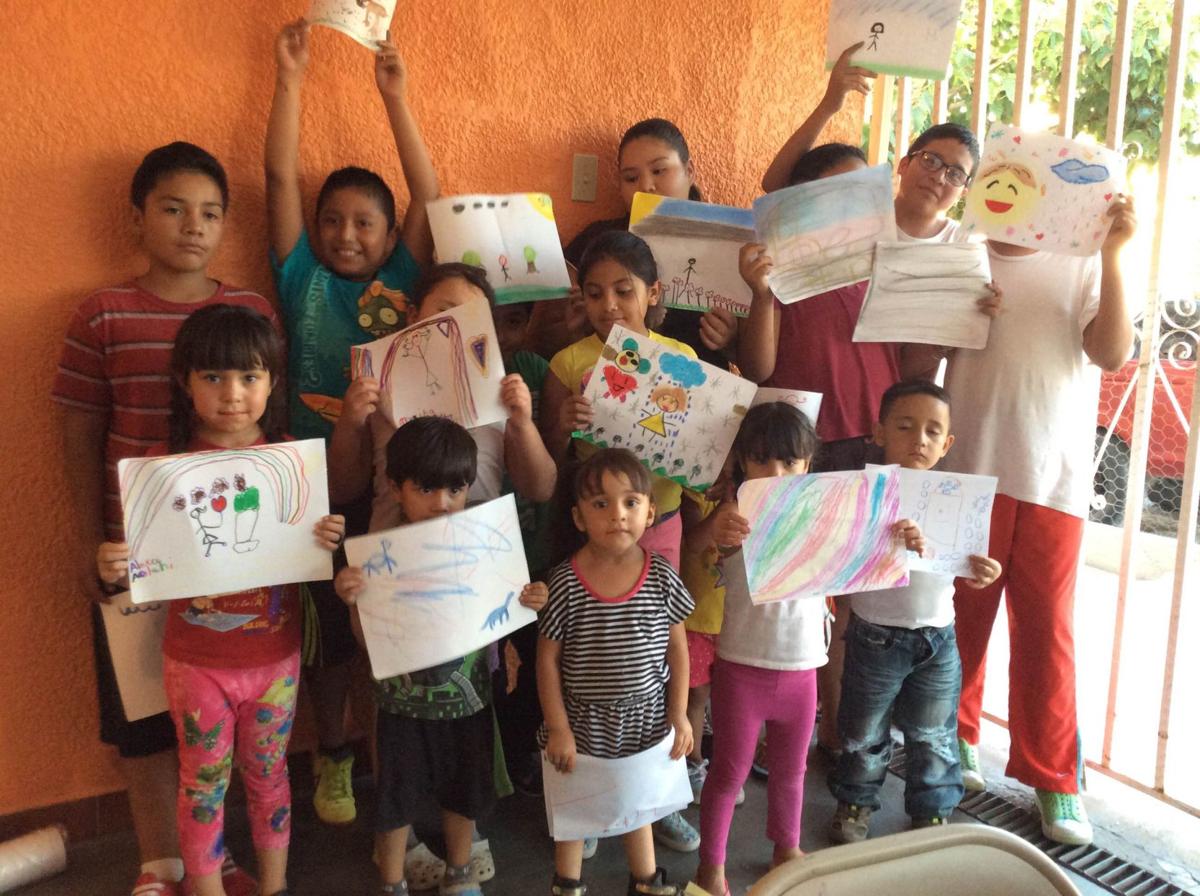 Neighborhood children show off the drawings they made in an after-school art workshop.

TxDOT is reviewing plans to paint a geometric mural along Interstate 10 near UTEP. Origami cranes, symbols of healing and peace, inspired its design.

The mural is starting to take shape, as seen from the U.S. side of the border. Amor por Juárez is leading a project that’s painting houses in bright colors.

A worker paints a design on a house in Juárez. Bhutanese-style buildings on the UTEP campus can be seen in the distance.

Neighborhood children show off the drawings they made in an after-school art workshop.

TxDOT is reviewing plans to paint a geometric mural along Interstate 10 near UTEP. Origami cranes, symbols of healing and peace, inspired its design.

JUÁREZ, Mexico – On the margins of this gritty industrial town, in one of the region’s poorest neighborhoods, an experiment is underway.

Its most visible feature will be a giant, rainbow-colored mural painted across 210 homes.

What organizers claim will be Mexico’s largest mural is part of a nonprofit-backed project called El Paso-Juárez Mágico, centered on Anapra. It aims to reduce poverty and crime in the community, which was torn apart by the cartel violence that exploded in Juárez between 2007 and 2011.

The project also involves painting a mural north of the border in El Paso, along Interstate 10.

Anapra, a crush of concrete shanties stacked atop one another with dirt roads snaking in between, is located just across the Rio Grande from El Paso.

Its residents have a clear view of Sunset Heights, and the buildings on the campus of the University of Texas at El Paso.

“We are trying to bring hope to the area,” said Ricardo Fernandez, president of Amor por Juárez, the project’s organizer. The mural project is backed by the Foundation for Competitiveness and Public Safety, a nonprofit based in Chihuahua, Mexico.

The Mexican government has contributed $80,000 to the project, according to organizers.

It is also supported by the El Paso Community Foundation, which has awarded the project a $30,000 matching grant.

“You’re creating something that people can believe in and take pride in, and from that, we are hoping to see a better sense of community,” said Eric Pearson, president of the El Paso Community Foundation.

The group’s plans go deeper than a fresh coat of paint, however. They see a huge need for mental health services in Anapra, and basic infrastructure, such as street lighting and paved roads.

The concept – crime prevention through environmental design – is not an entirely new one, and the El Paso-Juárez Mágico project was inspired by murals in the favelas of Rio de Janeiro and a similar project in Pachuca, Mexico, called Pachuca Paints Itself.

On a recent Tuesday morning, workers painted along an undulating dirt road, skipping over a shack that locals said was a picadero, where drug users shoot heroin.

Up a hill, a man loitered on a corner, watching from a distance. They said he’s one of the halcónes, or hawks – spotters hired by the drug cartels.

At one point, a group of women stopped to watch the painting. A woman walking a Chihuahua said her grandkids used to come visit her but can’t anymore.

“They killed several people here,” she said through a translator, pointing down the street. “A bullet came into my house.”

That was in 2010. Today, the 58 year old is worried about her roof, which was battered by a recent hailstorm, and the dirt road, which is washed out.

Yet she said she is encouraged by the rainbow colors spreading down the street. “They are bringing life to the houses,” she said.

A child played on a small scooter behind a rusty chain-link fence, just outside of his house. His father stepped outside.

Asked what actions the government or nonprofits have taken previously to help, the man, who was born in the neighborhood, said, “There has been no help.”

Workers carried up pails of paint and began covering his gray house in yellow and red, coloring the areas an artist had outlined earlier. “It’s a good project for the area,” the man said through an interpreter. He worries though that a recent spate of killings is an omen that violence is returning. He no longer takes his kids, ages 4 and 5, to the small park down the street.

There were 257 homicide cases recorded in Juárez through the first eight months of this year. That compares to 190 over the same period last year, according to reports. In 2010, Anapra was the most violent neighborhood in Juárez at a time when the city was known as the deadliest in the world.

“There were 250 murders in this 600-home area, alone,” Fernandez said. That’s more than 20 murders a month in one neighborhood. “Kids would go out into the streets for fun to see if they could find dead bodies,” Fernandez said.

The violence calmed in 2011, but about 20 percent of the homes in the neighborhood remain abandoned. Education levels here are the lowest in Juárez.

Residents, on average, have less than an eighth grade education, according to Amor por Juárez.

El Paso-Juárez Mágico, which was launched in March with little fanfare, involves no grand redevelopment plans. And the work – painting, patching concrete, ensuring streetlamps are lit and roads improved – isn’t glorious. But Pearson said they want to work at the street level to bring about change. “It all begins in the neighborhood,” he said.

In March, organizers began meeting with residents to explain the project and to get permission from property owners to paint their homes. Organizers have since launched after-school art workshops, which will continue through December.

Where there are no community centers to hold the workshops, residents gather in homes. Kids learn art while their mothers are taught how they can lead their own programs.

“We are not going to be here forever,” said Janette Terrazas, an artist supporting Amor por Juárez. It’s too early to say if the effort will make a difference, but residents said the attention alone is a step forward.

It has been difficult to win the trust of the residents, said project coordinator Daniel Gonzalez. They set aside money to pay residents who want to help paint, but so far few have taken them up on the offer, Gonzalez admits.

In El Paso, Amor por Juárez plans to sponsor a 60,000-square-foot mural on the concrete slope between the eastbound and westbound lanes of Interstate 10, just west of UTEP. The Hunt Family Foundation has donated $25,000 for the project but more funding is needed, according to Fernandez.

The mural’s design, which is inspired by origami cranes, a symbol of healing and peace, is being reviewed by the Texas Department of Transportation, which has to approve the project.

“What’s important is that we’re one community, and we’re trying to work with each other,” said El Paso Mayor Oscar Leeser. “It’s really exciting to see El Paso and Juárez working together on a project like this.”