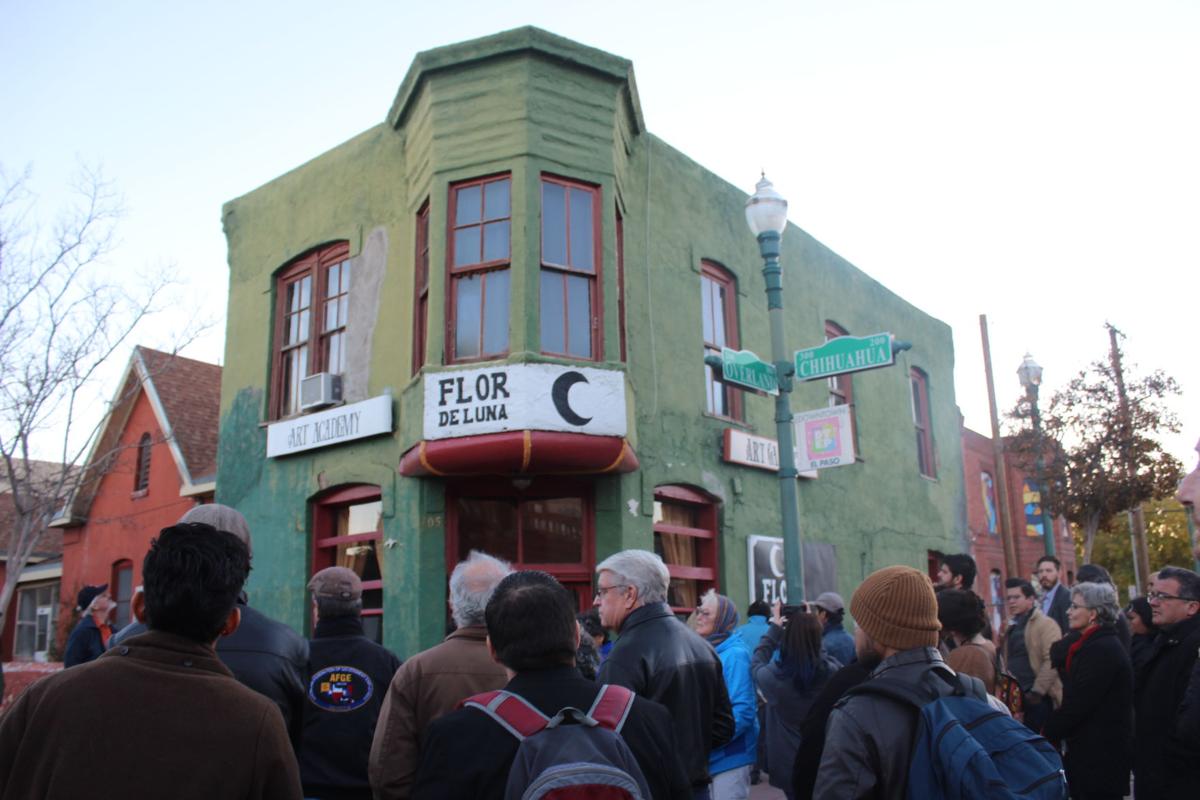 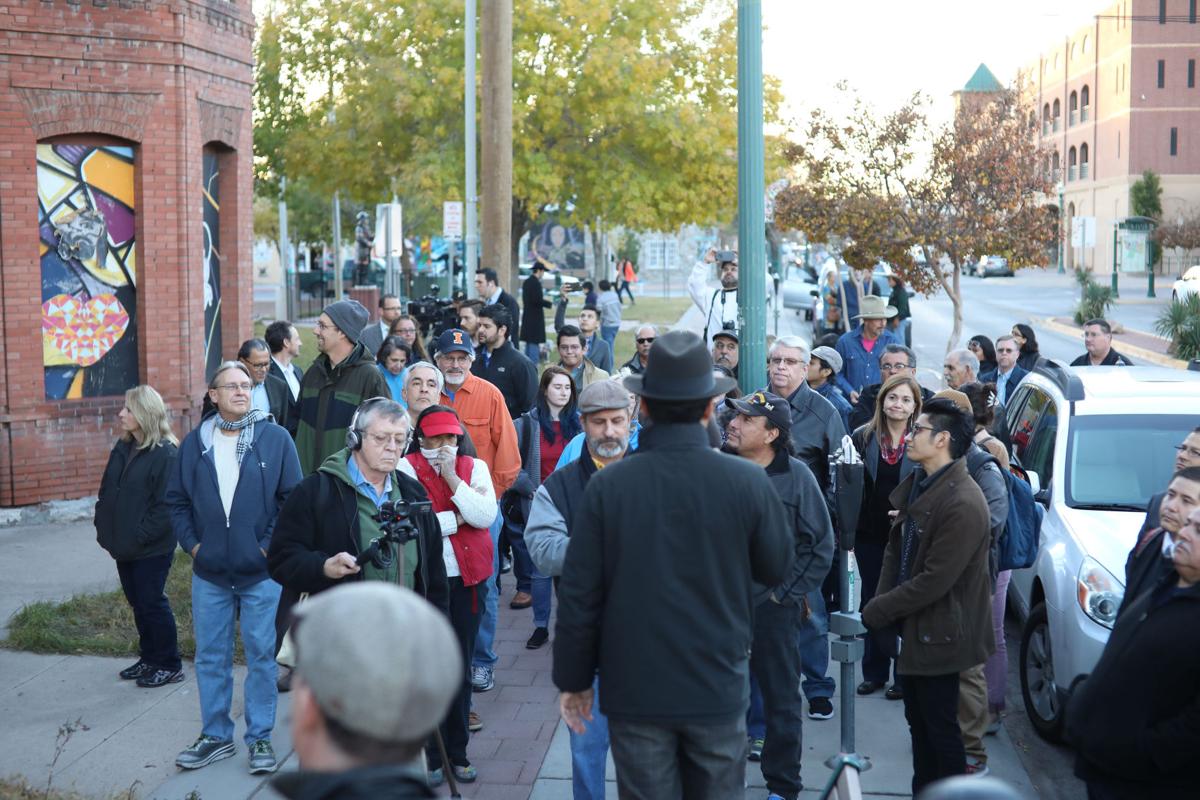 Max Grossman, with his back to the camera, leads a tour through the Durango neighborhood last Monday. The vice chair of the El Paso County Historical Commission explained the history of The Mansion, the building on the left, one of El Paso’s brothels.

Max Grossman, with his back to the camera, leads a tour through the Durango neighborhood last Monday. The vice chair of the El Paso County Historical Commission explained the history of The Mansion, the building on the left, one of El Paso’s brothels.

City Council members are hanging tough in their support for the controversial Downtown arena site, despite evidence of the historical importance of buildings that would be razed.

And city representatives say they’re not hearing from constituents or residents of the affected area south of the El Paso Convention Center who want the city to reconsider the arena’s location.

“You keep hearing that these people are complaining about the arena, yet the truth is (city) staff say people who live in the footprint of the arena say they’re ready to go,” District 3 city Rep. Emma Acosta told El Paso Inc.

The city is telling residents not to move until they’ve made relocation arrangements with the city, but there’s also news that some tenement residents who live outside the arena’s footprint are getting eviction notices.

“I talk to my constituents, and not one of them has said why put it there? They have only said where are we going to park?” Acosta said. “The people making all the noise, they don’t live there.”

Acosta also said that the city attorney, Sylvia Firth, has told the council that while some buildings in the footprint of the arena may be old, they are not historic if they’ve been altered.

“Any time you make any modifications to a historical building and take away its historical nature, it ceases to be historical,” Acosta said. “Some of them have new roofs that don’t coincide with how the buildings were built then, so they cease to be historical.”

She said Firth has told the council the only two buildings worth saving are the 1930 firehouse designed by El Paso’s best-known architect, Henry C. Trost, and The Mansion, a former brothel at 306 W. Overland.

On Tuesday, City Council members directed that historical elements, which may include those two buildings, must be incorporated into design of the arena – officially, the multipurpose culture and performing arts center.

Max Grossman, vice chairman of the El Paso County Historical Commission and one of the leading voices against the arena site, disputed Acosta’s statement and wondered who is advising Firth.

“That is the most absurd thing I have ever heard,” Grossman said, adding that no one who knows about historic preservation and restoration would agree that once a building has been altered, it loses its value.

Grossman also took issue with assertions by city officials that residents in the area who are forced to move because of the arena project will be assisted by the city.

That may be true for renters in the footprint of the arena but not, apparently, for those in what’s being called the master plan area immediately outside the arena footprint.

He said residents in the Durangito neighborhood’s oldest tenement, built in 1900, have gotten notices to leave by Jan. 1.

On Thursday, more than two dozen residents of the area picketed the city office that opened at 400 W. San Antonio to facilitate relocations.

Last Monday evening, Grossman led about 60 people, including state Sen. Jose Rodriguez, on a tour of buildings – all more than 100 years old – in the Durango neighborhood that, he said, are too important to lose.

They include the green Flor de Luna grocery, a Victorian-style building built in 1886 when El Paso was 13 years old, a well-preserved Victorian home next door built the same year, and the former La Norteña Restaurant.

What few people know, he said, is that the Norteña building at 212 W. Overland is the last remaining Chinese laundry and relic of a Chinese community that was once the largest in Texas.

Chinese workers were brought to the area to work on the railroad in the late 1800s.

The newest member of City Council, District 2 city Rep. Jim Tolbert, said he still has no reservations about the arena plan and isn’t moved by the historic value of the buildings the city may try to save.

“You take a look at the old fire station that they take as a Trost building,” Tolbert said. “True, but Trost was in his 90s when that was designed and built, and it was really someone in his office that did that, not Trost."

According to biographical information on the website of the Texas State Historical Association, Trost was born in 1860. That would have made him 70 years old when the firehouse was built in 1930, not in his 90s.

“No. 2," Tolbert continued, "I am not excited about saving a 100-year-old whorehouse – a monument to the degradation of women and illegal sex trafficking. I’m not at all interested in that.”

Nonetheless, Tolbert said, he is still “all for historic preservation.”

“I want our good buildings Downtown to be preserved, but that doesn’t mean that I am opposed to evolution,” he added.

District 1 city Rep. Peter Svarzbein, a strong proponent of the refurbishment of the city’s original streetcars and the $97-million project to revive the Downtown trolley system, said he appreciates El Paso’s history and culture.

“I think it’s about finding a balance that we can try to preserve those assets that are important and celebrate our history in different shapes and forms,” he said.

I personally applaud District 3 city Rep. Emma Acosta and District 2 city Rep.Jim Tolbert on their continuing conquest to move El Paso forward!
The overall picture is that the footprint of the proposed downtown arena will look amazing once the new downtown arena is built and completed.
With so many millions of dollars being invested into downtown El Paso with it's revitalization process,every week I look forward to my next copy of the El Paso Inc.
The only disappointment comes from Max Grossman and all the negative protestors that don't even live within the Union Plaza Master Plan.
What is so important about saving a house that use to be Chinese laundry, or a Mansion that was once a Brothel to exploit women for sexual pleasure. Let alone a FireHouse that has nothing to do with El Paso's most famous architect Henry. Trost. My entire life time I have watched El Paso grow with great interest and expectations and yet that was very minimal growth especially in the downtown area.During the 1980's and 1990's there were more setbacks for downtown El Paso as it was turned into a ghost town once the sun would set.You couldn't even catch a bus out of there after 6 PM as it had an irre third world deplorable setting to it. So saving dilapidated run down houses,dwellings and vacant warehouses makes no sense,some people tell me that they miss the old El Paso. I miss it too
but that was the El Paso of the 1950's the 1960's and early 1970's it was bustling in those days. As I now look forward to great new developments,changes that will bring more economic progress for downtown El Paso.
Have a nice day!
[wink]

Mr Tolbert - Your comment regarding the arena site is TOTALLY INCORRECT

“You take a look at the old fire station that they take as a Trost building,” Tolbert said. “True, but Trost was in his 90s when that was designed and built, and it was really someone in his office that did that, not Trost.

Mr. Tolbert - maybe if you and the city council members should take the time to learn the history of El Paso maybe you wouldn't be so quick to bulldoze it down.