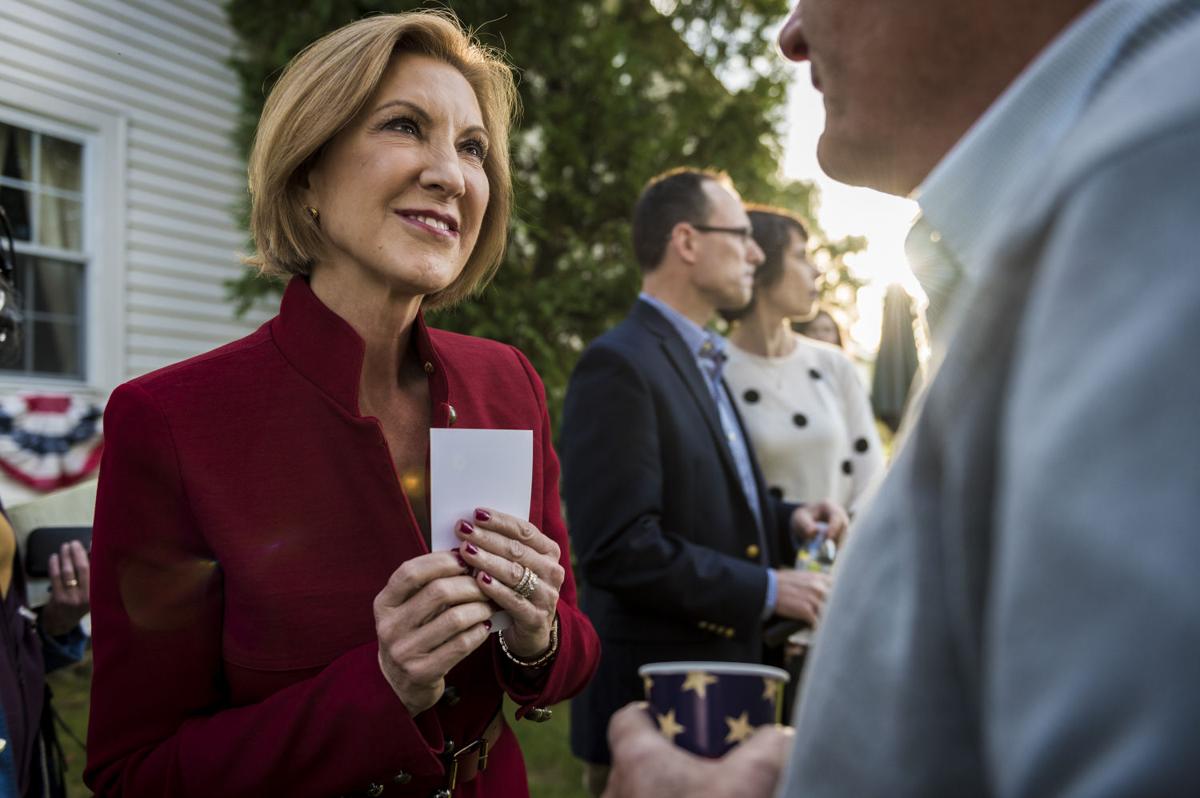 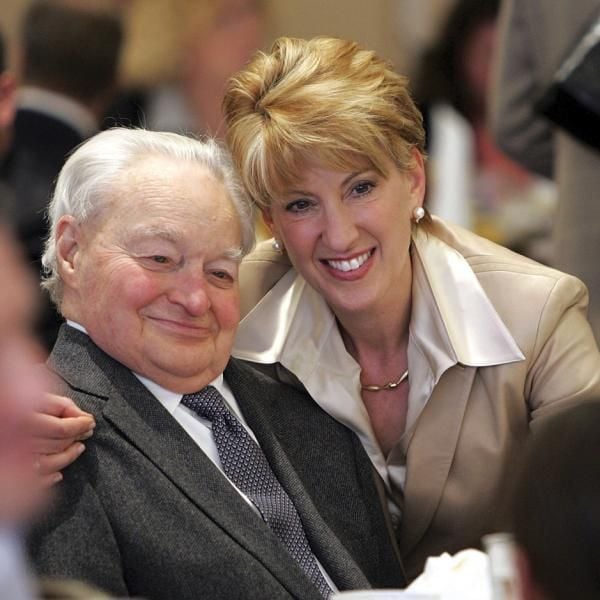 An undated photo of Fiorina with her father, Joseph Tyree Sneed III, who some call one of the finest lawyers of his generation.

An undated photo of Fiorina with her father, Joseph Tyree Sneed III, who some call one of the finest lawyers of his generation.

AUSTIN – Rick Perry may be out of the race for president, but the Republican field is still brimming with Texans.

One of them is Carly Fiorina, who has surged into the top tier of candidates, behind only Donald Trump and Ben Carson in recent polls.

Born Cara Carleton Sneed in Austin in September 1954 to Joseph Tyree Sneed III, a law professor at the University of Texas at Austin, and his wife, Madelon, her Texas residency was fleeting.

She departed at age 2 in the tow of her father’s swift ascent as “one of the finest lawyers of his generation,” as Terry Eastland, who served as spokesman for the Reagan Justice Department, described him.

But Fiorina’s Texas ties are hardly ephemeral. Those roots are deep and strong, as a fifth-generation Texan with a family history as illustrious and notorious as any the state has produced.

Fiorina’s ancestors had been in Virginia since before the American Revolution and followed the well-worn path across Tennessee to Texas. In 1839, Joseph Perkins Sneed, a circuit-riding preacher from Tennessee, arrived in East Texas, eventually establishing a church in the Brazos Valley city of Calvert.

Missing a vertebra, Sneed’s head listed to one side, and with diminished lung capacity, he was advised to avoid physical exertion.

“But football was the rite of passage for all young men in Texas, and my father was determined to measure up,” Fiorina wrote in her 2006 memoir, “Tough Choices.”

“And so almost by sheer force of will he became a winning player on the high school team. His ferocity on the field was legendary and made up for his lack of physical gifts.”

Among his fondest memories were teenage days working as a cowhand on a family ranch in the Panhandle.

Sneed went from studying and then teaching law at UT-Austin to the law faculty at Cornell and Stanford before being named dean at Duke Law School.

From there, President Richard Nixon, enamored of the rare Republican atop an elite law school, named him deputy attorney general in February 1973, two months before Attorney General Richard Kleindienst resigned amid the scandal enveloping the Justice Department and the White House.

Sneed’s reputation for probity may have spared him a promotion to attorney general by the embattled president that might have entangled Sneed in Watergate, instead winning him a quick exit after six months on the job – most notable for presiding ably over the 71-day standoff at Wounded Knee – with an appointment to a seat on the 9th U.S. Circuit Court of Appeals in San Francisco.

There, for nearly 35 years, Sneed would serve as the great conservative dissenter on the nation’s most famously liberal court.

Along the way, he was also the decisive figure on the three-judge panel that in 1994 named Ken Starr, a Texan and prize student of Sneed’s at Duke, as the independent counsel investigating President Bill Clinton, setting in motion the impeachment that Sneed would later tell Ken Gormley, author of “The Death of American Virtue: Clinton vs. Starr,” was political folly, “because the likelihood of impeaching a president who hasn’t committed murder seems to me so remote that it’s a show to gain political position more than anything.”

Sneed, who died in 2008, knew from family experience that even murder is not always a punishable crime, especially in Texas.

Crimes of the century

It was Sneed’s uncle – Fiorina’s great uncle – John Beal Sneed, who was center stage in one of the great melodramas of crime, passion and frontier justice in early 20th-century Texas.

On the evening of Jan. 13, 1912, John Beal Sneed strode into Fort Worth’s Metropolitan Hotel and pumped five or six bullets from a .32-caliber handgun into Albert G. Boyce Sr., the former longtime manager of the Panhandle’s XIT Ranch.

Boyce was father of the man who had “eloped” to Canada with Sneed’s wife, Lena, after helping her escape from the Fort Worth sanitarium to which Beal had committed her for “moral insanity” after she revealed to him her love for Albert G. Boyce Jr.

In September, nine months after killing Boyce Sr. – who he believed had plotted with his son to steal Lena – and between his mistrial and retrial for the shooting in Fort Worth, Sneed, disguised as a farm laborer in blue overalls, shot and killed Albert G. Boyce Jr. in front of a Methodist church in their hometown of Amarillo.

Sneed would be tried and acquitted of both murders, his defense team focused on making sure that if any jurors weren’t native Texans, they were at the very least Southern-born.

The trials were covered in newspapers across the country and graced the front page of the Austin Statesman for weeks.

Sneed’s first acquittal for killing the elder Boyce stunned the defendant and his lawyers.

When reporters demanded an explanation for the verdict, the jury foreman replied, “The best answer is because this is Texas.”

“Because this is Texas” is the title of a 100-page article in the 1999 issue of the Panhandle-Plains Historical Review, based on both Sneed and Boyce family records, written by Fiorina’s sister, Clara Sneed, a teacher, tutor and writer in Berkeley, California.

She is finishing a novel based on the astonishing family saga that gripped Texas and the nation for more than a year.

The feud does not figure in Fiorina’s memoir or campaign biography.

From the time he was in Austin, Joseph Sneed was an active Republican.

In April 1955 he spoke about “Why a Two-Party System in Texas” and the causes for the one-party system in Texas and the South, to the Travis County Republican Women.

Sneed had harbored thoughts that he might end up on the Supreme Court.

“Chief Justice (William) Rehnquist and I have known each other for a long, long time and actually at one time I think he looked at me as probably somebody he might push for the Supreme Court,” Sneed had said.

She had little use for “wayward brother Beal” or Lena, whom John Beal Sneed brought along with their girls to the family farm in Calvert for safekeeping at the height of the trouble, “much to Mrs. Sneed’s chagrin.”

The epic family story was off limits, for decades talked about only in hushed, disapproving tones.

From Clara Sneed’s journal article: “‘I was taught,’ said my father, ‘that Lena lost control of her feelings.’ For this his mother (my grandmother) looked down on Lena, as did many others. The siren song of the body and the heart was to be resisted in all but the most appropriate circumstances.”

In the end, her lover dead at the hand of her husband, Lena returned to Sneed. They eventually moved to Dallas, lived the rest of their life together and are buried side-by-side in Hillcrest Cemetery.

He would be proud

Fiorina’s politics seem to fit better with Texas than California, where she ran for a Senate seat and lost to liberal Democrat Barbara Boxer in a tough campaign that focused on job losses while at Hewlett-Packard.

Pressed on that issue by Chuck Todd recently on “Meet the Press,” Fiorina responded like a Texan. “There were many jobs that left California,” she said. “And you know where they went? To the state of Texas. Because the state of Texas had a set of policies in place that made job creation and job salvation easier than the state of California.”

Now the daughter of the man who dreamed of being on the Supreme Court is seeking the presidency.