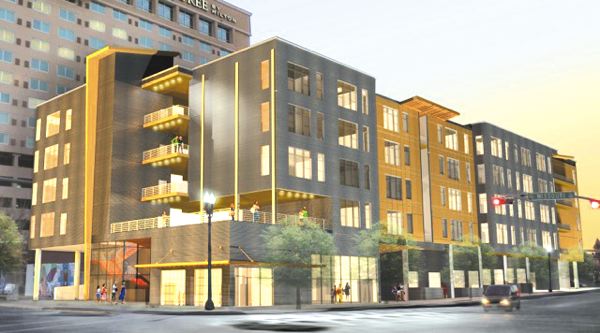 An artist’s rendering of Artspace, a project to build housing for artists in Downtown El Paso.

An artist’s rendering of Artspace, a project to build housing for artists in Downtown El Paso.

For five years, the El Paso Community Foundation and Minneapolis-based non-profit Artspace Projects Inc. have been working on the project, which would build a modern, multi-story building in Downtown to provide affordable housing and workspaces for artists.

“It becomes an upward spiral toward a real community in Downtown, not just a collection of buildings and businesses,” says Eric Pearson, president of the El Paso Community Foundation.

The project failed to get off the ground last year. However, because of a statewide rule change and the vote by City Council on Tuesday to support the project and contribute a $500,000 low-interest loan toward its construction, Pearson is hopeful the project will move forward this year.

If all goes according to plan, construction would begin in about a year and could finish as soon as spring 2016, according to Sarah White, Artspace director of property development.

Last year, Artspace applied for Low-Income-Housing Tax credits, which would subsidize about 70 percent of the project’s $10-million development cost. The federal subsidy was signed into law by President Ronald Reagan to spur private developers to build low-income housing.

This year the Texas Department of Housing and Community Affairs changed the rules, giving cities much more control over which projects are awarded the tax credits.

Since City Council supported the project with a resolution and funding, the project will receive extra points on its application.

“Having those points is really key,” White said.

She added, “Between reducing costs to be more competitive and having the local support, we have really, really strengthened our application.”

Artspace has 35 projects around the country with a total of 1,167 units, according to a spokesperson. The non-profit recently completed two projects: Artspace Jackson Flats in Minneapolis and Minot Artspace Lofts in Minot, N.D.

The Low-Income-Housing Tax credit allocation for the El Paso region this year is $2.4 million, according to Bill Lilly, head of the city’s Community and Human Development department.

“In this particular instance, the winner is going to be the city of El Paso and El Paso residents. We will get affordable housing. The issue becomes who and what particular development,” Lilly told city representatives.

Lilly recommended City Council support the tax credit applications of two developers, Artspace, which is requesting $830,000 in tax credits, and the Housing Authority of the City of El Paso. It is requesting $1.5 million in tax credits to rebuild a portion of its Sherman Plaza public housing development at 4528 Blanco in South-Central El Paso.

Other projects were not in desirable locations or were not compatible with the city’s comprehensive plan, Lilly said. One project was located across from scrap yards in Far East El Paso and another in an area zoned for industrial development.

In the end, City Council agreed with Lilly, voting to support Artspace and the Sherman Plaza development.

White with Artspace says they will submit their tax credit application to the state by the end of February.

Awards should be announced in July.