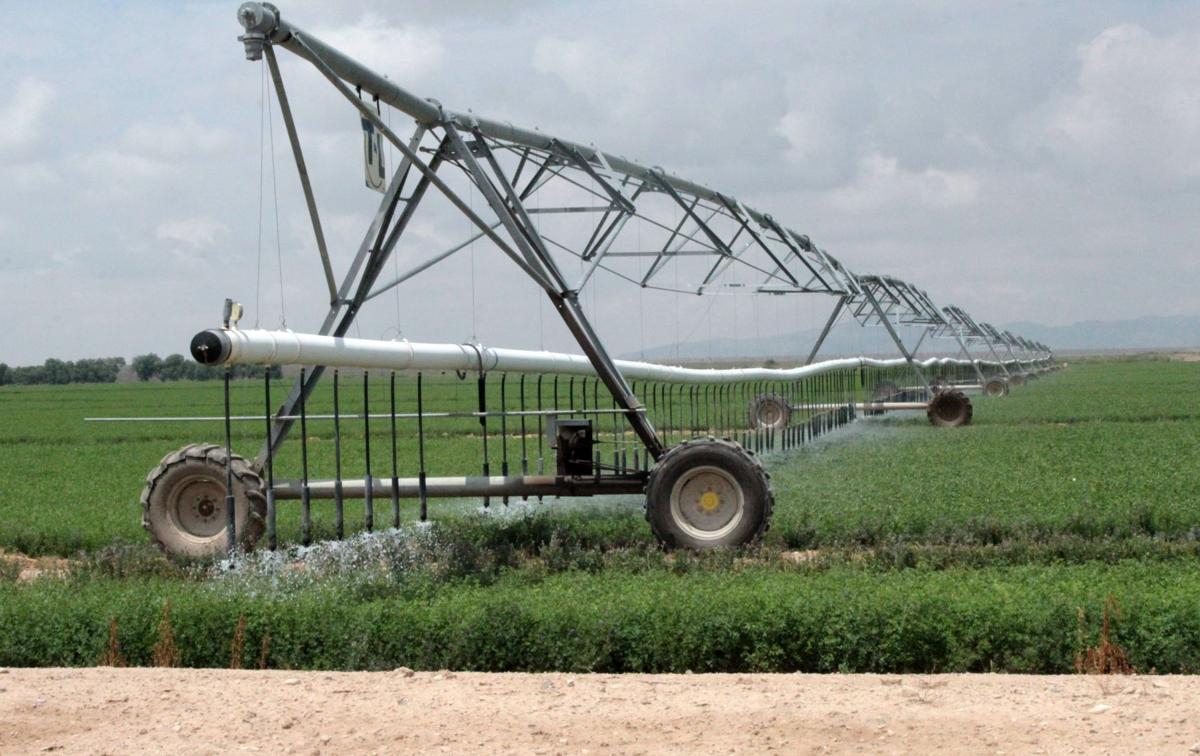 The green fields of Dell City, 95 miles east of El Paso, are irrigated with water from the region’s underground aquifer. El Paso Water is buying a 26,000-acre ranch there not for the land, but for the water beneath it. 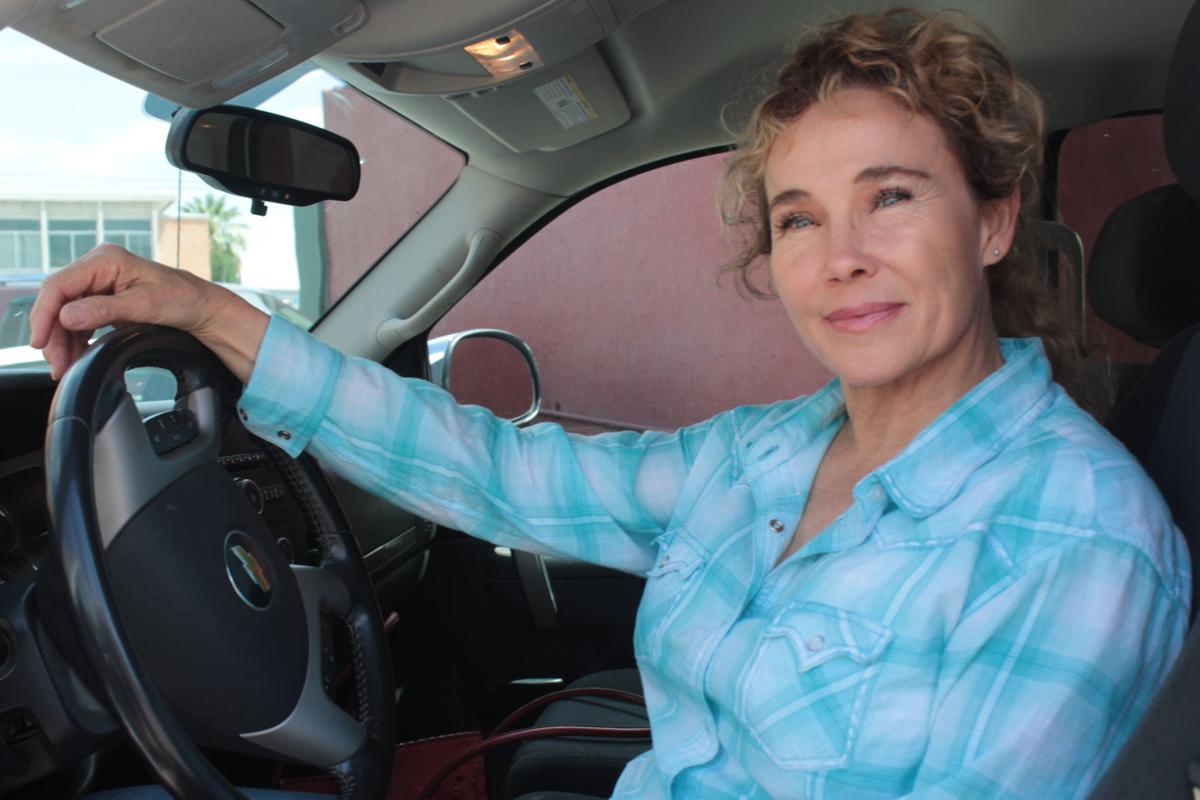 Laura Lynch, whose family owns the Chambers Lynch Ranch, calls the El Paso water utility ‘the gold standard’ when it comes to stewardship of water. 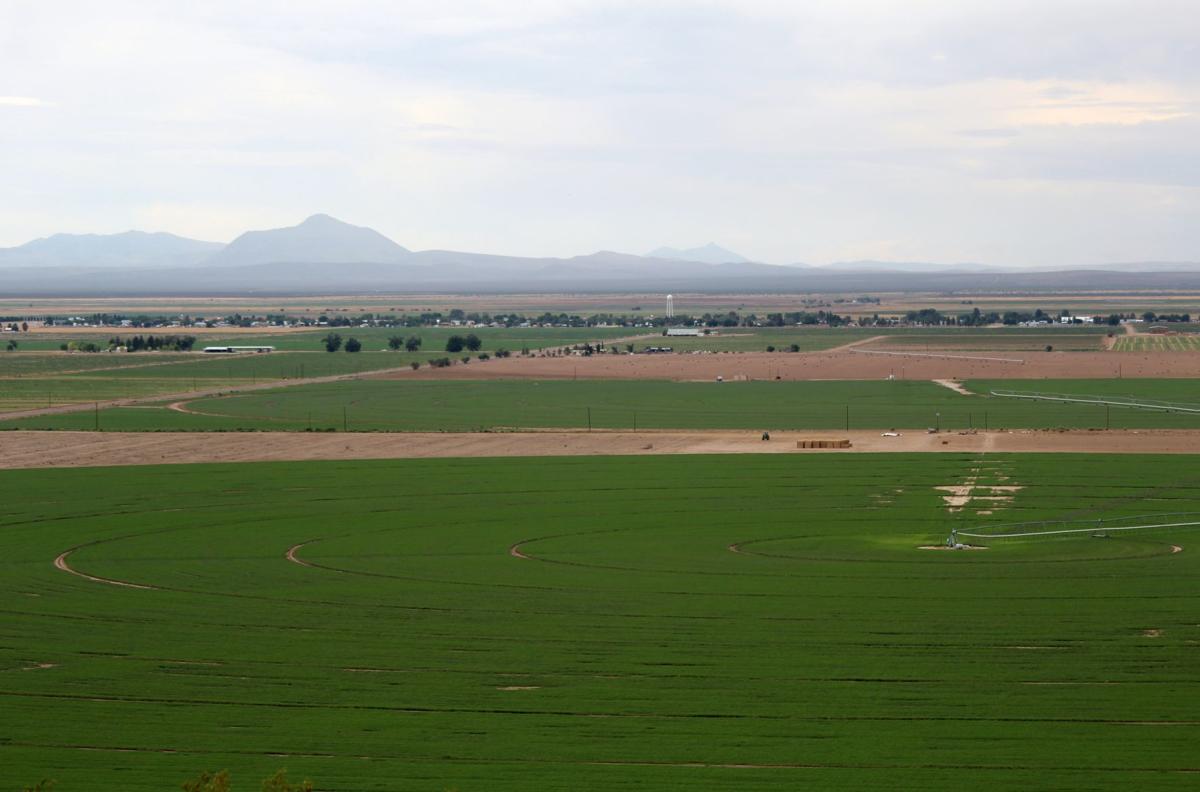 About 21,000 acres are under cultivation in Dell Valley, almost all of it alfalfa. Fields are irrigated by pivoting sprinkler arms mounted on wheels that gush water onto crops. 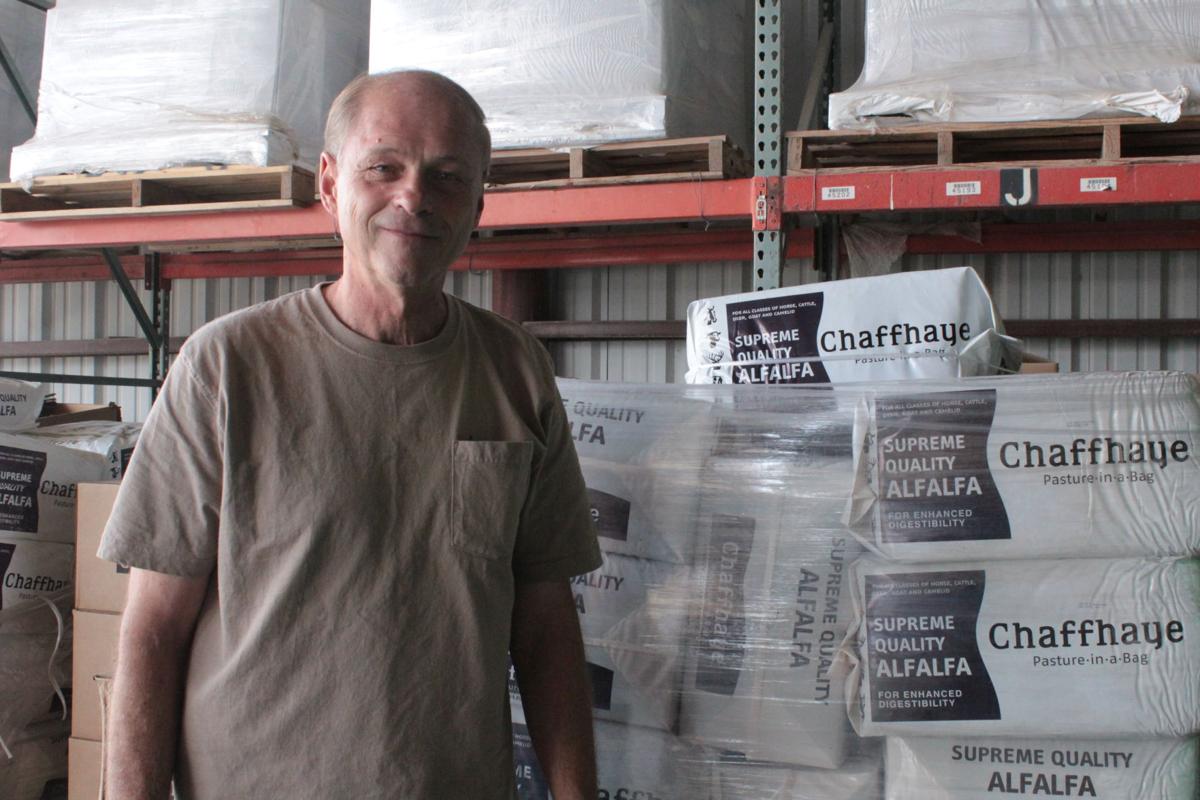 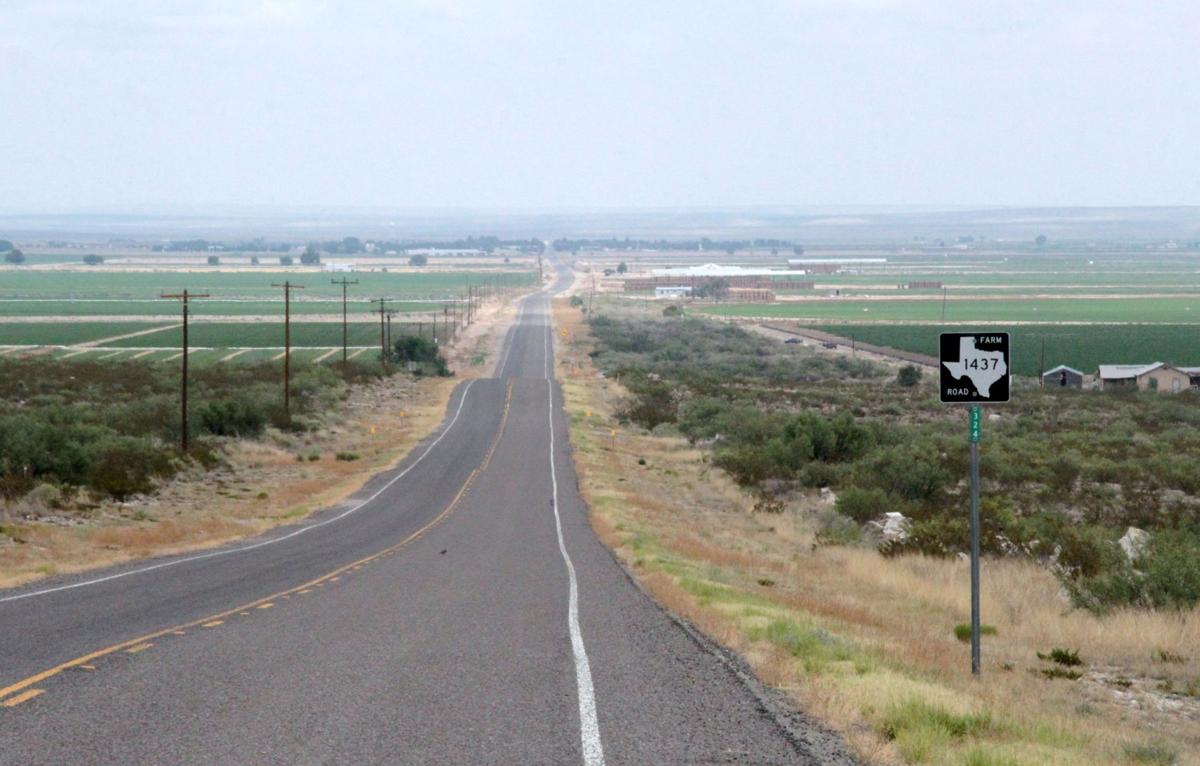 Farm Road 1437 runs through the Dell Valley, with the Guadalupe Mountains in the distance. Some farmers worry that El Paso Water’s purchase will push them out of business.

The green fields of Dell City, 95 miles east of El Paso, are irrigated with water from the region’s underground aquifer. El Paso Water is buying a 26,000-acre ranch there not for the land, but for the water beneath it.

Laura Lynch, whose family owns the Chambers Lynch Ranch, calls the El Paso water utility ‘the gold standard’ when it comes to stewardship of water.

About 21,000 acres are under cultivation in Dell Valley, almost all of it alfalfa. Fields are irrigated by pivoting sprinkler arms mounted on wheels that gush water onto crops.

Farm Road 1437 runs through the Dell Valley, with the Guadalupe Mountains in the distance. Some farmers worry that El Paso Water’s purchase will push them out of business.

DELL CITY – El Paso Water Utilities is making its first big buy in Hudspeth County’s Dell Valley, reviving worries among residents and small landowners about the future of the farming oasis in the desert.

The utility was scheduled to sign the deal last Thursday, buying the 26,470-acre Chambers Lynch Ranch for $50 million, but advised El Paso Inc. that the closing was postponed and pushed into this week.

Once purchased, the land will be leased out for farming. El Paso just wants what lies beneath it.

And that purchase will be followed by others as El Paso Water – the utility’s new name – moves ahead with its long-term plan to import water from counties to the east in West Texas.

Responding to El Paso Inc.’s questions about further acquisitions, the utility issued a statement: “We are in negotiations with several property owners in Hudspeth County to purchase land at this time.

“Since we are in negotiations, we are not at liberty to disclose any specifics, including property owner names.”

John Balliew, the utility’s president and CEO, later elaborated, in a phone interview, saying, “We have sent letters to probably a dozen different property owners in the Dell City area asking them if they would be interested in selling their property.

“Some, of course, said no. Some of them have resulted in starting conversations.”

One of the best-known members of the Lynch family in Hudspeth and El Paso counties is Laura Lynch, who stays busy renting cabins in Dell City to tourists – cabins she is renovating herself, one by one.

She has a friendly take on the sale of the ranch her father and his two brothers started in 1950. It’s still run by her 93-year-old uncle, James Lynch. The website www.theclranch.com describes the ranch.

“It could not go into better hands,” she said, referring to El Paso Water. “They are the gold standard in the United States for water utilities when it comes to stewardship.

“That’s what created this opportunity, and the city needs the water.”

The $50 million to buy the ranch comes in the form of a low-interest loan approved last year by the Texas Water Development Board from the state’s $2 billion State Water Implementation Fund, better known as the SWIFT Fund.

The utility has applied to borrow $100 million more for additional land purchases in Dell Valley and future pipeline rights of way.

In all, the utility expects to spend $600 million on land acquisition and infrastructure in coming years before it starts importing water.

It’s all cactus, creosote and sandy dirt until the farm road rises to the valley’s edge, revealing an expanse of green fields as far as the eye can see.

There are 21,000 acres under cultivation in Dell Valley, almost all of it in alfalfa. Fields are watered by low, pivoting sprinkler arms – some half a mile long – that gush onto thirsty fields.

Mounted on wheels, the arms move so slowly, it’s hard to tell they are moving at all.

But the valley is not a quiet place. The guttural rattle and roar of big, unmuffled motors that power the many wells is everywhere.

A Dell City sign says the population is 413, but residents know it’s really about half that today.

It was bigger in its early days, as described in a Life Magazine article from December 1950: “Last fortnight, plunk in the center of what had been a desert, the 1,000 citizens of a thriving new town called Dell City opened a new highway to the outside world.”

Inside the town’s only eatery, the Spanish Angel Café, four men sit at their regular table a little after noon, talking about anything and everything.

It doesn’t take much to turn the conversation to water and the sale of the second biggest ranch in the district to El Paso.

Craig Gentry, a member of the local school board, said he and other farmers are concerned that they didn’t get purchase offers from El Paso Water.

“They did the big ones, but there’s a bunch of us guys that have smaller acreages and nobody approached any of us,” he said. “If all these big outfits sell out, that could hurt us.”

His father, Gerald Gentry, added, “They could squeeze us out.”

Steve Rader is the owner of a small plant that packages specialty hay originally from New Zealand called Chaffhaye. He said he needs to expand but wonders if he should do it somewhere else.

“This just throws a bunch of uncertainty into play,” he said. “People who have businesses out here might want to sell, and the first thing the buyer’s going to ask is what’s the water situation?

Balliew has offered assurances to property owners that the utility’s interest in buying land now does not signal a shift in the utility’s long-range plan to begin water importation in the year 2050 or later.

“It does not represent any kind of change,” he told El Paso Inc. last week. “You can’t just go from zero to importation in a short period of time.

“What we’re doing is we’re taking advantage of the low cost of borrowing money at this point in time, which not only is reflective of the economy in general but also the availability of the SWIFT fund, to use that to purchase water-rights land that is available right now in the Dell City.”

El Paso Water, a semi-autonomous utility governed by the Public Service Board, already owns 101,706 acres of land, which includes 26,159 acres in El Paso County and 868 acres in New Mexico.

Then there are two sprawling water ranches and a working farm amounting to 74,677 acres that the utility has acquired in the past 25 years in Hudspeth, Presidio, Jeff Davis and Culbertson counties.

“There are three principle pieces of property,” Balliew said. “There’s one in the Valentine area, one more or less in the Van Horn area and one that is southeast of Dell City that we generally refer to as Diablo Farms.”

Known for looking 50 years into the future, El Paso Water laid plans more than a decade ago to link the water ranches by pipeline running north to the Dell Valley and then down to El Paso, 95 miles away.

An earlier version of the plan called for importation to start sooner, but the utility’s construction of the Kay Bailey Hutchison Desalination Plant in 2007 and other water-stretching measures made it possible to push importation to 2050 or later.

But it could come sooner depending on El Paso’s growth and the availability of water from the Rio Grande, which has furnished more than half of El Paso’s annual needs in most years since 1990.

One of the wonders of Dell Valley’s Bone Springs-Victorio Peak Aquifer is that it recharges each year, replacing the water extracted for agricultural purposes.

Some Dell Valley residents are afraid that El Paso Water will own enough land and take enough water to effectively end farming in the valley.

They point to Las Angeles’ appropriation of Owens Valley water in the early 1950s.

Balliew said that is not the utility’s aim at all.

The land the utility acquires that is now being farmed will be leased out for farming – to the current owners, if they’re interested in staying in business, he said.

“What I would tell you about how the future would look is probably not much different than it looks today,” Balliew said.

“Once we start importation, we’re not going to start full blast and the whole thing dries up overnight.

“There is renewable water there, which means it’s recharged, and we would use it to the extent that it is recharged. There will be a long period when we’re not taking any water.”

The Far West Texas Water Plan for 2050 calls for the utility to acquire enough land to export 10,000 acre-feet of water a year.

“Then, there will be a long period of time even after we start that there’ll be enough water for the exportation and the local agriculture production,” Balliew said.