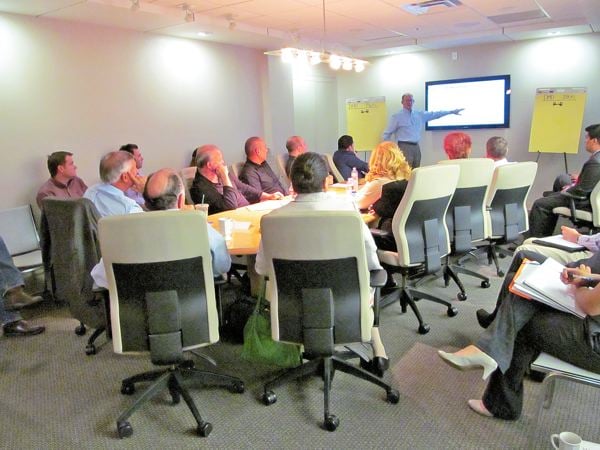 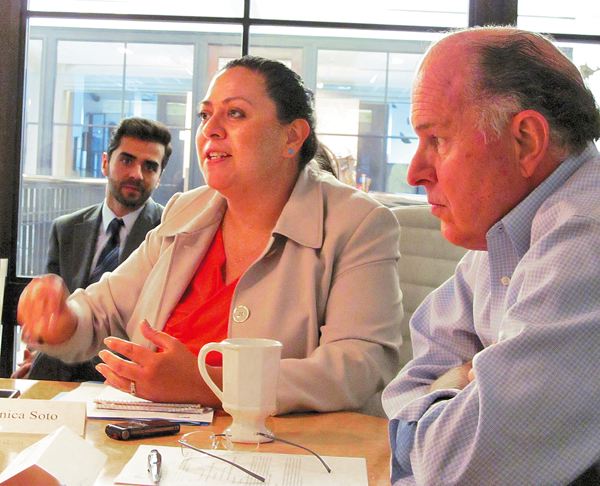 Veronica Soto, left, executive director of the Downtown Management District, speaks during a strategic planning session. On the right is Bob Ayoub, who chairs the DMD board.

Veronica Soto, left, executive director of the Downtown Management District, speaks during a strategic planning session. On the right is Bob Ayoub, who chairs the DMD board.

The Downtown Management District, a governmental organization created to handle services like trash pick up and street cleaning in Downtown, has a problem.

To cover the cost of the services, the district collects an annual assessment – call it a tax – from owners of 522 Downtown properties.

But an investigation by El Paso Inc. found that a recent increase in the assessment may be invalid because of the way the district counted support for the increase.

It’s a complex process that the DMD has been working on for 18 months. The DMD needed owners whose properties account for more than 50 percent of all taxable value within the district to sign petitions supporting a higher ceiling for assessments. That would allow the DMD board to double collections in the next five years.

On the basis of those petitions, in September the DMD board raised the assessment rate by 2 cents to 14 cents per $100 valuation.

As a result, the El Paso consolidated tax office, which just mailed out tax statements, may have to send new, corrected assessment notices to owners of 522 Downtown properties.

The problems El Paso Inc. found involve two of the DMD’s own board members, Jorge Hernandez and George Salom, the new president of the El Paso Central Business Association.

Salom said he learned last week that four Downtown properties belonging to his father had been grouped with two of his properties on the DMD’s list.

He said his father, whose properties are under the George S. Salom Family Limited Partnership and are valued at more than $2.8 million, does not support the DMD as it’s being run or the planned increases in property assessments.

“No authorization or signing was given for that entity,” said the younger Salom, referring to the George S. Salom family partnership.

Asked if that error raises the possibility of other mistakes in the petition process, Salom said, “Oh, without a doubt.”

In Hernandez’s case, 11 properties are listed under his name on the DMD list as supporting the succession of increases in the district’s assessment rate.

But Hernandez, who owns Krystal Jeans and other stores on South El Paso Street, said he only had authorization to sign the petition on behalf of eight of those properties, not the other three.

“Two of those properties belong to my parents,” he said. “Those were left off since the get go. Like Mr. Salom Sr., my father said no.”

“I’m not related to her,” Hernandez said in an interview at one of his stores. “I don’t know who she is.”

Here is the DMD’s problem: Deducting the value of the Salom and Hernandez properties from the $167.3-million worth listed in support of raising assessment drops the approval level to 49.5 percent.

On hearing about the Aurora Hernandez property, Soto moaned, and said, “I had not noticed that. I don’t know why she would be under Jorge Hernandez.”

As for mistakenly including George Salom’s father’s properties with those of his son, Soto said she made an incorrect assumption.

“George did confirm he only signed for two properties, and I’m, like, ‘It’s my mistake for assuming your dad, who was a founding board member, was also in agreement,’ ” she said.

Soto said she spent the 18 months leading up to the board’s September meeting seeking support from property owners for raising the assessment ceiling and that things got very tight at the end.

“We were in a time crush because the tax office was saying, ‘We need your assessment and what your rate is going to be,’ ” she said. “The board meeting was on Wednesday, but the tax office’s deadline was the prior Monday.

“So, there was a little bit of time pressure, I won’t deny that.”

She concedes that the loss of the seven properties in question would invalidate the 2-cent increase in the rate the board approved on Sept. 18.

It would also undo the petitions’ authorization to push the rate to 24 cents by 2017.

“I did reach out to the tax office,” she said. “They said they can send out a corrected notice. If anyone has already paid, the tax office themselves will send them an overpayment refund application.”

The consolidated tax office’s assessor and collector, David Childs, could not be reached for comment.

The DMD is an unusual creature under Texas law, which is why it’s often called a quasi-governmental organization.

It has an unelected 21-member board that’s appointed by City Council, yet it collects what property owners think of as taxes. But they’re not treated like taxes under state law and they’re called assessments.

While a governmental body can raise taxes on its own authority, the DMD has a ceiling on its property assessment rate that can only be raised if property owners ask for the increase through a cumbersome petition process.

Over the next five years, the DMD board intends to double its assessment rate to 24 cents per $100 valuation because the district is doing a lot more today than anyone envisioned when businessman Tanny Berg led the effort to establish it in 1997.

At their Sept. 18 meeting, the board members were told the owners’ petitions represented properties accounting for 50.2 percent of the DMD’s $331 million total valuation.

A list of the signing owners handed out at the time bore 47 names.

Asked about the discrepancy, she said those two names had been inadvertently left off the list given to the board and that the third, signed for a small, $20,000 property, came in later.

Board member and lawyer Sam Legate told El Paso Inc. he was concerned that a slight mistake in the petition process could endanger the validity of the increased assessment rate and the DMD’s budget. So, he proposed a second vote to approve the existing 12-cent rate – just in case. The board approved.

“I don’t think there was an overwhelming confidence on the board,” Legate said. “I made them adopt a back-up rate to keep it the same.” His measure might just save the day for the DMD, giving it a legitimate rate to fall back on.

At the public hearing the night before the board’s vote, four property owners spoke up, all in opposition to increasing the assessment rate. They included Tanny Berg, the El Paso businessman who pointedly questioned whether the property value represented by property owner signatures actually topped 50 percent of the district’s value, as required by law.

He called for an audit of the petition process, which Soto said has since been commissioned and is under way. It is being performed by Gibson Ruddock Patterson, a CPA firm.

“The audit is not done,” Soto said last week. “The problem is getting to people and hearing back from them. It took me a little over 18 months to get all the petitions.”

Berg thinks the DMD’s larger problem is the gulf between people like him and the elder George Salom, those who started the DMD, and most of the DMD’s current 21-member board.

Only a few of the board members are among the 50 on the list supporting the assessment increases. That’s because only a few of them own property in the district, Berg said.

He said he worked to establish the DMD to let Downtown business owners impose a small tax on themselves to take care of problems the city wasn’t handling well – chiefly, keeping the streets and sidewalks clean and providing more security.

For years, the DMD and Central Business Association, or CBA, were run together, sharing a roof and an executive director, Mike Breitinger.

Breitinger left in 2011 and went to work for state Rep. Joe Pickett, D-El Paso, after the city broke the DMD away from the CBA. The DMD has gone on to become a more ambitious organization, helping out with Downtown events and marketing them.

“It’s not at all what we envisioned when we created this district,” Berg said. “City manager Joyce Wilson installed Veronica and you’ve got a board made of up people who don’t own property Downtown.

“I don’t think we ever expected to see $240,000 of the district’s money going to salaries. I feel terrible because I promised this wouldn’t happen.”

Berg, who was aware of the problems with the Hernandez and Salom petitions, called the process “sloppy.”

The chairman of the DMD board is Bob Ayoub, president of MIMCO, the commercial real estate and shopping center giant started by Meyer Marcus in 1972. The company owns and manages properties in border communities and in New Mexico, but has only a few in Downtown El Paso.

Ayoub said the DMD had to up its game to keep up with Downtown and help it become a destination for El Pasoans and tourists for the good of El Paso.

“We’re supporting all of Downtown now,” Ayoub said. “The entertainment district and office district are part of our district. We’re trying to attract offices and business Downtown and people to live Downtown.

“Downtown has to be seen as a great place to be. We see it that way but we feel like we have to get the rest of the city to understand how good it is and how much fun it is to be Downtown.”

“I don’t know how significant the tax increases are going to be,” he said. “It’s going to be up to the board and the board’s going to have to justify the increases.

“We’re working on a whole new marketing plan, and I think people will see results from it.”

El Paso Inc.’s interview with Ayoub took place before the discovery of the problems with the Salom and Hernandez petitions. Ayoub could not be reached for further comment.

I didn't realize that there was an organization like the DMD that's in charge of street cleaning and trash pickup. I seriously doubt some of these property owners or DMD board members walk downtown because if they did, they'd be disgusted at how utterly gross some of those sidewalks are. I say some, because there are property owners that keep the areas around their buildings clean. But for the most part, if you walk downtown on the weekends or even during the week during lunch, the smell can be overwhelming and the fact that you sometimes have to watch your step or step in _______ (insert disgusting bodily function here), is disheartening and discouraging. I certainly hope they can straighten the issues out and get back to working on cleaning up downtown.