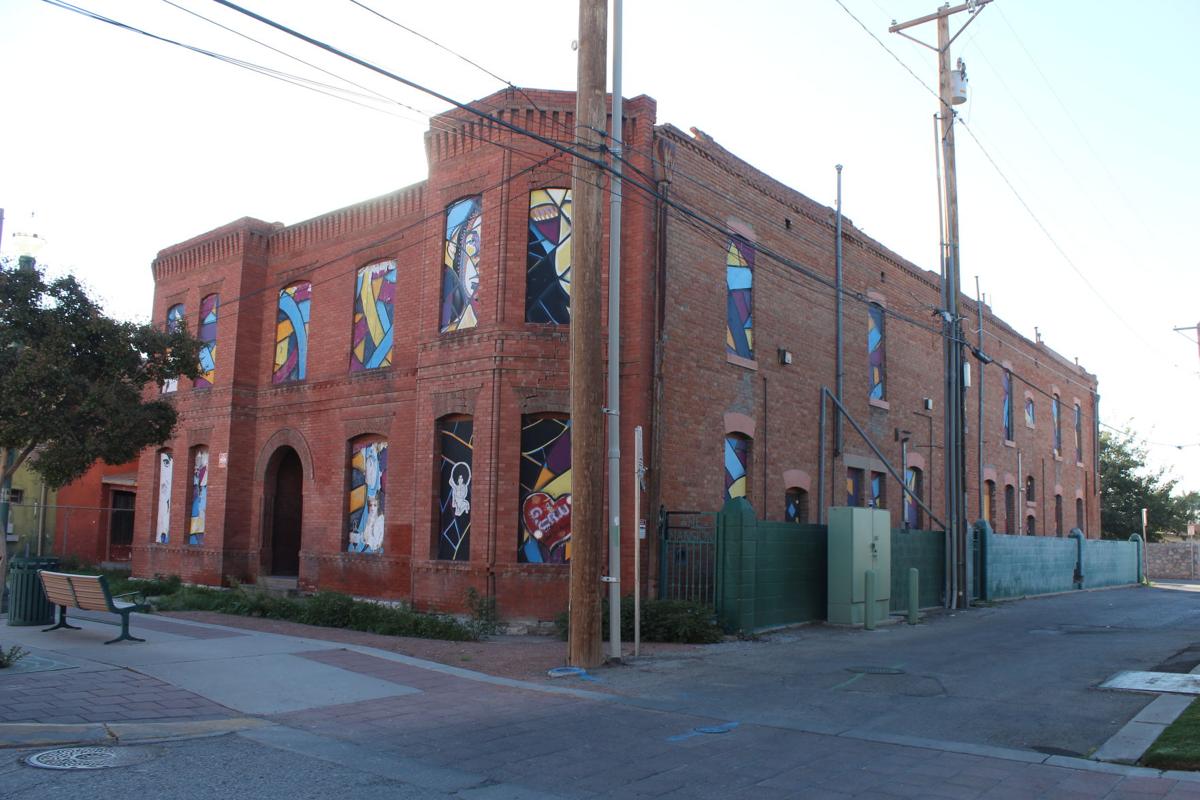 The Mansion, a historic building in Duranguito. 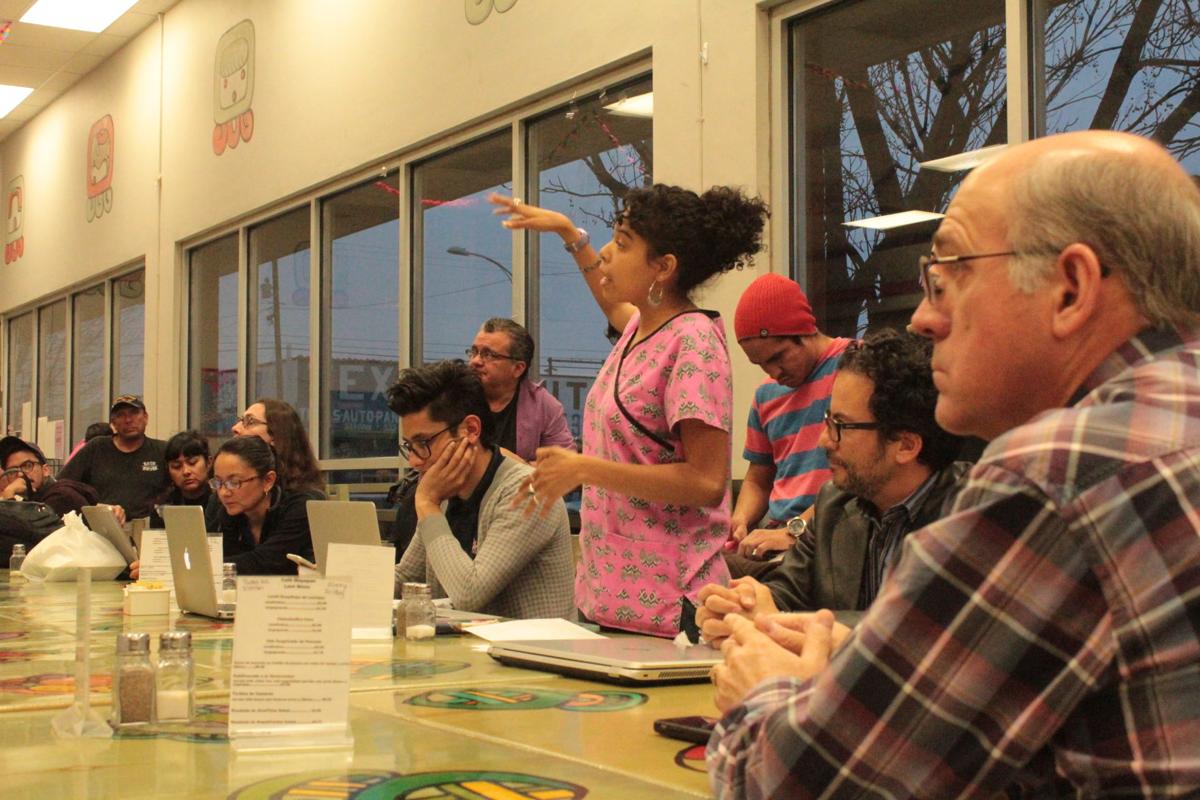 Citalic Ozelomaitc Jeffers Peña, center, a volunteer with the Paso del Sur group, explained details of the petition drive during a meeting last Monday at Café Mayapan. Rick Kern, right, is a member of the El Paso County Historical Commission.

The Mansion, a historic building in Duranguito.

Citalic Ozelomaitc Jeffers Peña, center, a volunteer with the Paso del Sur group, explained details of the petition drive during a meeting last Monday at Café Mayapan. Rick Kern, right, is a member of the El Paso County Historical Commission.

As they try to block the city’s plans to build a $180-million arena in Union Plaza, opponents are taking the initiative and referendum petition route that’s been used successfully only twice in El Paso to put a controversial issue before voters.

One city representative, recalling that City Council overturned a referendum that voters had approved in 2011, suggests that the council could do that again.

If the petition process goes as Paso del Sur and its supporters expect, voters will decide whether to establish a Duranguito Historic District in the Nov. 7 general election.

But getting there is a difficult process.

Organizers must conduct two, separate petition drives, each requiring the signatures of “at least five percent of the voters who voted in the last general City election,” according to the City Charter. The signers must be people who actually voted in that election.

The first petition, the initiative, would put a proposed ordinance to create the historic district before City Council for a vote.

If the council rejects it, as expected, Paso del Sur and its allies would have to conduct a second petition drive – requiring the same number of signatures as the first – to let voters decide the issue in a citywide referendum.

That, Duranguito supporters believe, would make it difficult for the city to demolish historic buildings in the district to build a multipurpose arena with as many as 20,000 seats.

“Paso del Sur is collaborating closely with the residents of Duranguito to fight the demolition and destruction of this historic neighborhood,” said Citalic Ozelomaitc Jeffers Peña, one of the group’s leaders.

She thinks the city should move the multipurpose arena to the city-owned land next to Cohen Stadium in Northeast El Paso.

The city’s bond counsel Paul Braden of Norton Rose Fulbright in Dallas addressed the possibility of building the arena at another location during Tuesday’s City Council meeting.

That would raise legal problems, he said, because the official language describing the 2012 quality of life bond propositions stated the arena would be “located in downtown.”

“Not delivering the project in downtown would break the city’s contract with voters, violate state law and expose the city to potential lawsuits,” read a city statement based on Braden’s advice.

One way the city might get around that problem, Braden said, would be to go back to the voters in this year’s Nov. 7 election with a measure seeking approval to build the multipurpose center elsewhere.

Organizers of the petition drive and their lawyers were surprised last week to learn that they would need more signatures than expected.

They thought they were shooting for 1,831, based on the turnout in the city’s 2015 election when voters citywide settled a contract dispute with the firefighters union.

But on Thursday, City Clerk Richarda Momsen advised the lawyers that they had to use the turnout in the 2013 mayoral election instead.

One of the organizers, Max Grossman, said there was a larger turnout in that election, 46,200 voters, and that would require them to gather at least 2,310 signatures.

“We’ve already generated our new voter lists and many of the voters are the same,” Grossman said. “We’re going to aim for 2,500.”

Petition organizers have the names and addresses of those voters on laptops and pads that will go door to door collecting signatures to ensure that those who sign the petition voted in the election. Grossman said getting signatures has been easier than he thought.

“Everybody has an opinion, and I’ve encountered hostility to the city’s plan and enthusiastic support for the establishment of the Duranguito Historic District. So far, 80 percent of the people I’ve talked to have signed,” he said.

Whether the city should build the multipurpose arena in Union Plaza may still be a question for some council members, but city Rep. Michiel Noe said it isn’t for him.

“We’re moving forward with it,” Noe said. “It’s full steam ahead on that site. If someone can come up with a better one, we’re all ears.”

He said creation of a historic district wouldn’t have to stand in the city’s way. He recalled what happened after the 2011 referendum election in which 55 percent of voters approved a ban on city health benefits for the domestic partners of city employees.

When officials realized the broad language of the referendum approved by voters also took away benefits for retired firefighters and police, the city challenged it in federal court but lost.

For that reason, City Council voted to overturn the ban and restore the full slate of domestic partner benefits to city employees and preserve retirees’ benefits as well.

“That’s what City Councils do,” Noe said. “We kill ordinances. We put them in and we take them out. That’s what government does.

“I’m not saying that’s what would happen here, but they think it’s a slam dunk and it’s not. There’s a lot of nuances to this.”

In the aftermath of the 2011 decision on health benefits, angry El Pasoans mounted unsuccessful recall efforts against Mayor John Cook and city Reps. Susie Byrd and Steve Ortega. Litigation went on for years.

City Rep. Emma Acosta, who’s running for mayor, said she’d hate to see the city’s plans upset by a referendum creating a historic district there. But she wouldn’t vote to overturn it.

“I respect the will of the people,” she said. “They put me here to be their voice. Others may have a different approach.”

Having to abandon all the work done so far would be time consuming and expensive, she said. She wonders where the Duranguito defenders were several years ago when the city was looking at that site and others and seeking public input.

“Adair Margo was there and Lily Limón was there,” Acosta said. “A lot of people went to the meetings we had at the civic center a block from Duranguito, but they did not comment.

“I looked at all those sign-in sheets, and Max Grossman didn’t attend any of those meetings.”

Nor, she said, did other leaders of the current opposition.

City Rep. Lily Limón, the only council member to still oppose the Union Plaza site, said she doesn’t understand why the city refuses to consider another location also recommended by studies. That’s the Downtown BNSF rail yard at Paisano and Santa Fe, just south of the Union Plaza site.

“There are no homes there,” she said. “We have an additional entry on Paisano and we’re right there by the SunMetro station.”

There is no such thing as Barrio Durangito, it's called Union Plaza which is located in downtown El Paso Texas, United States of America!
But ever since the Plan El Paso of 2006 was unveiled, this new terrorist gang that call themselves the Paso Del Sur has continue to demonise all downtown progress.
Call it as it is but these people protest about everything including the creation of Southwest University park Stadium back in 2012.
They all come from the crime ridden South Ward also known as the Segundo Barrio or South El Paso. And they protest all the progress taking place in downtown El Paso,they even protest the ongoing electric streetcar progress. I happen to known someone that works for El Paso Electric and he tells me all about them complaining all the time. If they are not complaining about the streetcars they are all at city hall meetings protesting the downtown arena.
I favor the downtown arena over crime and blight while these same people favor never changing or improving their own way of life.
The El Paso County Historical Commission people need to stay out of the way of voter approved quality of life downtown arena. I hope that the Texas Rangers doing the investigation about the Texas open meeting law violation starts to indict those city council members responsible. Starting with city rep. Lily Limon! and ending with the mayor by making examples out of them all by bringing them to justice.
[sad] sad sad sad!!!