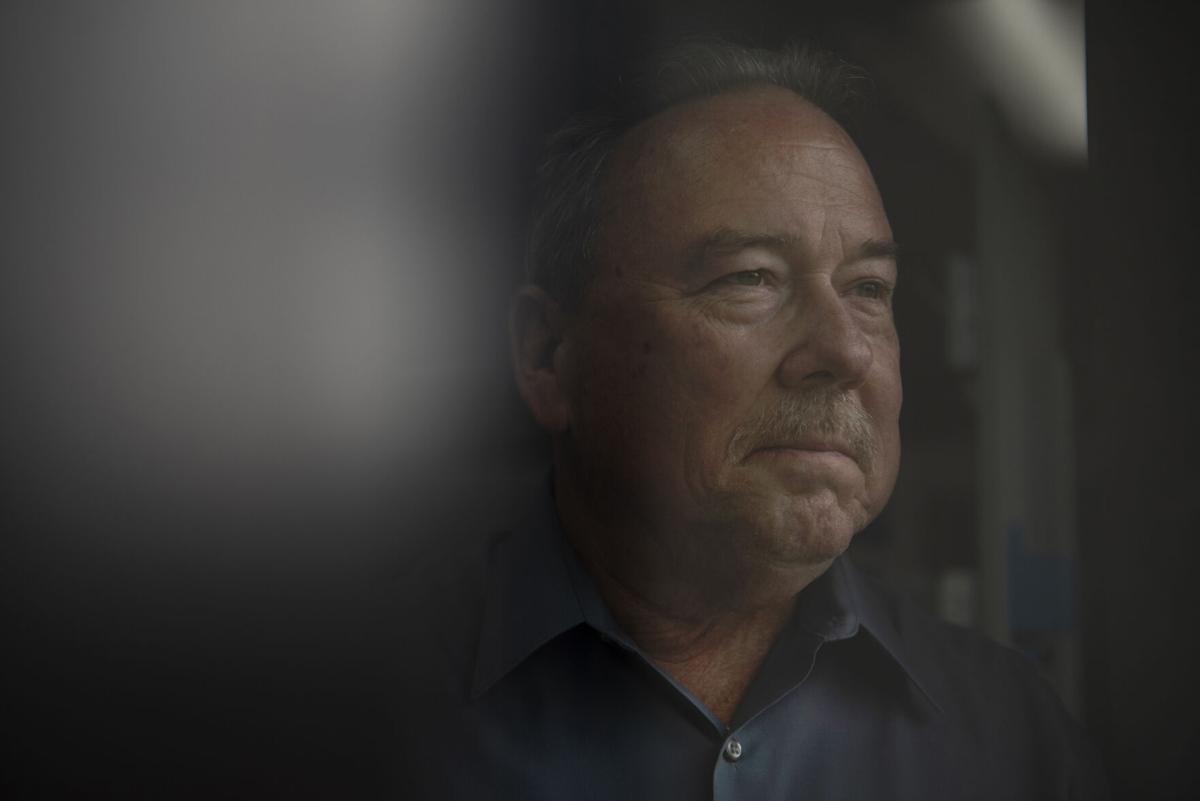 While David Collins of Houston appreciates the ease of telemedicine, he sometimes prefers an in-person doctor’s visit. ‘If you break your arm, an e-visit isn’t going to help you at all,’ he said. 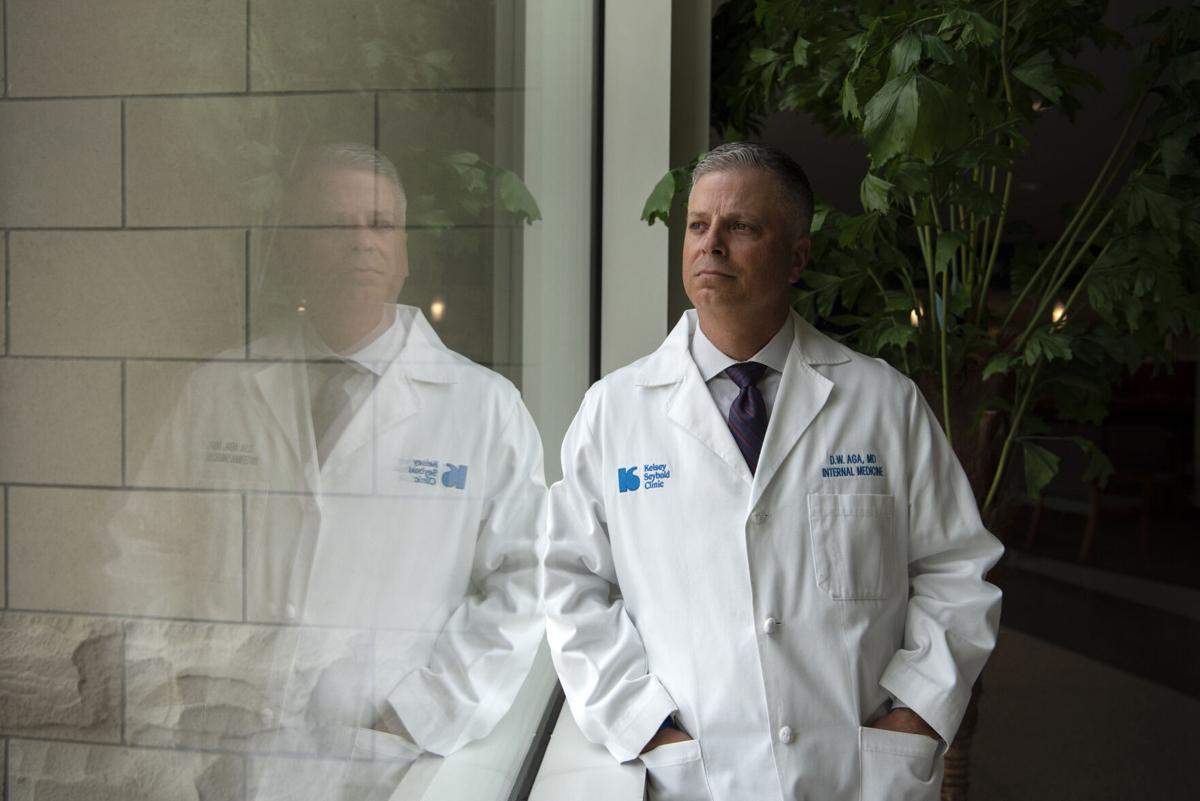 Dr. Donnie Aga oversees telehealth at Kelsey-Seybold in Houston, which has seen telemedicine rise and fall in waves since the pandemic began. ‘You’ve got to have a balance, for sure,’ he said.

While David Collins of Houston appreciates the ease of telemedicine, he sometimes prefers an in-person doctor’s visit. ‘If you break your arm, an e-visit isn’t going to help you at all,’ he said.

Dr. Donnie Aga oversees telehealth at Kelsey-Seybold in Houston, which has seen telemedicine rise and fall in waves since the pandemic began. ‘You’ve got to have a balance, for sure,’ he said.

Telemedicine is having its moment. Over the last few months, millions of people have relied on video or telephone calls to talk to their doctors. But as the pandemic moves across the United States, and eventually recedes in some places, how long will the moment last?

While patients used virtual visits to avoid overcrowded and potentially infectious doctor’s offices or emergency rooms, many are returning to face-to-face appointments in cities where the threat has subsided.

And insurance payments for telehealth services, especially at full cost, may only be temporary.

Medicare’s coverage of a broad range of services is slated to end when the coronavirus no longer poses a public health emergency. Private insurers, which followed the federal government’s lead, could revert to paying doctors for virtual visits at a fraction of the cost for traditional visits, if anything at all.

Some of the nation’s biggest insurers, like UnitedHealthcare and Anthem, say they haven’t decided beyond September or October on whether to extend the policies they adopted that allowed for coverage in lieu of doctors’ visits during the coronavirus crisis.

“The concern everyone in the industry has is that reimbursement is in jeopardy,” said Dr. Mia Levy, the director of the cancer center at Rush University Medical Center in Chicago, which treated patients virtually during the height of the pandemic. “Because of telehealth, we were able to stay actively engaged with our patients,” she said.

While there is broad bipartisan support for telehealth coverage, Congress would have to pass specific legislation to make some of Medicare’s changes permanent.

“Reversing course would be a mistake,” said Seema Verma, the administrator for the federal program, which reimbursed doctors the same for virtual visits, including those over the telephone, as for in-person ones and relaxed rules about who can use telemedicine.

About 9 million people under traditional Medicare used telemedicine services during the early months of the crisis. Early data does not show wide variations in use by race or ethnicity.

“It was really a no-brainer for us,” Verma said.

And spending on telemedicine services during the first peak of the coronavirus pandemic in the U.S. underscores the demand. In addition to federal spending through Medicare, nearly $4 billion was billed nationally for telehealth visits during March and April, compared with less than $60 million for the same two months of 2019, according to FAIR Health, a nonprofit group that analyzes private health insurance claims.

The biggest hurdle to widespread adoption by both the government and insurers is the potential cost.

Lawmakers are reluctant to pass any bill that would significantly add to Medicare’s budget, with the government already spending a total of some $750 billion a year.

And private insurers see telemedicine as a way to save them money, said Sabrina Corlette, a research professor at Georgetown University, who helped author a recent report on how the companies responded to the pandemic. “Unless they are required to by the states or federal government, a lot of carriers will try to reimburse less for telehealth than an in-person visit,” she said.

For those at risk, telemedicine is particularly valuable. When a fever sent Susan Varak, 45, who has breast cancer, to the emergency room during the height of Chicago’s outbreak in April, she felt as if she were “walking into this war zone,” she said, because she was so terrified of catching the virus.

She appreciates she still can see her oncologist remotely. “I don’t think it’s absolutely necessary to be face-to-face every couple of weeks,” she said.

Other patients like the convenience. David Collins, 67, didn’t have a choice when he had a 20-minute video visit in March to rule out a diagnosis of coronavirus. Like many practices during the pandemic, the Kelsey-Seybold Clinic, a large physician group in Houston, was not allowing most patients to come in.

“I loved it because it saved me a lot of time,” he said. “I’d much rather do that than drive across town and look for parking.”

But, a few months later, he didn’t hesitate to go to the clinic for his checkup. “There’s a little more hands-on required,” he explained, like getting a physical exam and having his blood pressure taken. Not everything can be done virtually, he said. “If you break your arm, an e-visit isn’t going to help you at all,” he said.

After seeing about 90% of its patients virtually, Kelsey-Seybold has “almost flip-flopped back,” said Dr. Donnie Aga, an internist who oversees telehealth for the group. Most patients seem to prefer an in-person appointment. “You could really see that people missed coming in,” he said.

Many in Congress are already convinced that Medicare should continue the current coverage. “The COVID-19 pandemic has been a trial by fire, but the experience to date has made clear that the health care system is ready for broader access to telehealth on a permanent basis,” said Sen. Ron Wyden, D-Ore., who introduced legislation earlier this month.

On Thursday, Sen. Lamar Alexander, R-Tenn., chair of the Senate Health Committee, introduced the Telehealth Modernization Act, which would also make some changes permanent. The experience of the previous four months “will likely mean that hundreds of millions of physician-patient visits will be remote or online that were in-person before,” he said.

Since May, nearly 20 telemedicine bills have been brought to the House floor and about the same number in the Senate, said Miranda Franco, a senior policy adviser for the law firm Holland &amp; Knight. She thinks legislation will be passed by the end of the year.

While some lawmakers favor permanently expanding Medicare payment for a broad range of telemedicine services, others are concerned about the technology’s cost and potential for fraud. “Now you’re talking about reimbursing services we haven’t reimbursed before,” Franco said.

Some proponents argue the goal of telemedicine should not be to lower health care costs overall. One of its main benefits is improving patients’ access to care, said Dr. Ateev Mehrotra, a professor of health care policy at Harvard Medical School, adding that it would be foolish to expect savings if more people also get treatment. “Those don’t reconcile,” he said.

Insurers should evaluate whether telemedicine is more effective for treating conditions like depression than it is for, say, cancer. They could then make those distinctions in reimbursing for virtual visits, he said, just as they do for different prescription drugs.

“There should be no single telemedicine policy,” Mehrotra said.