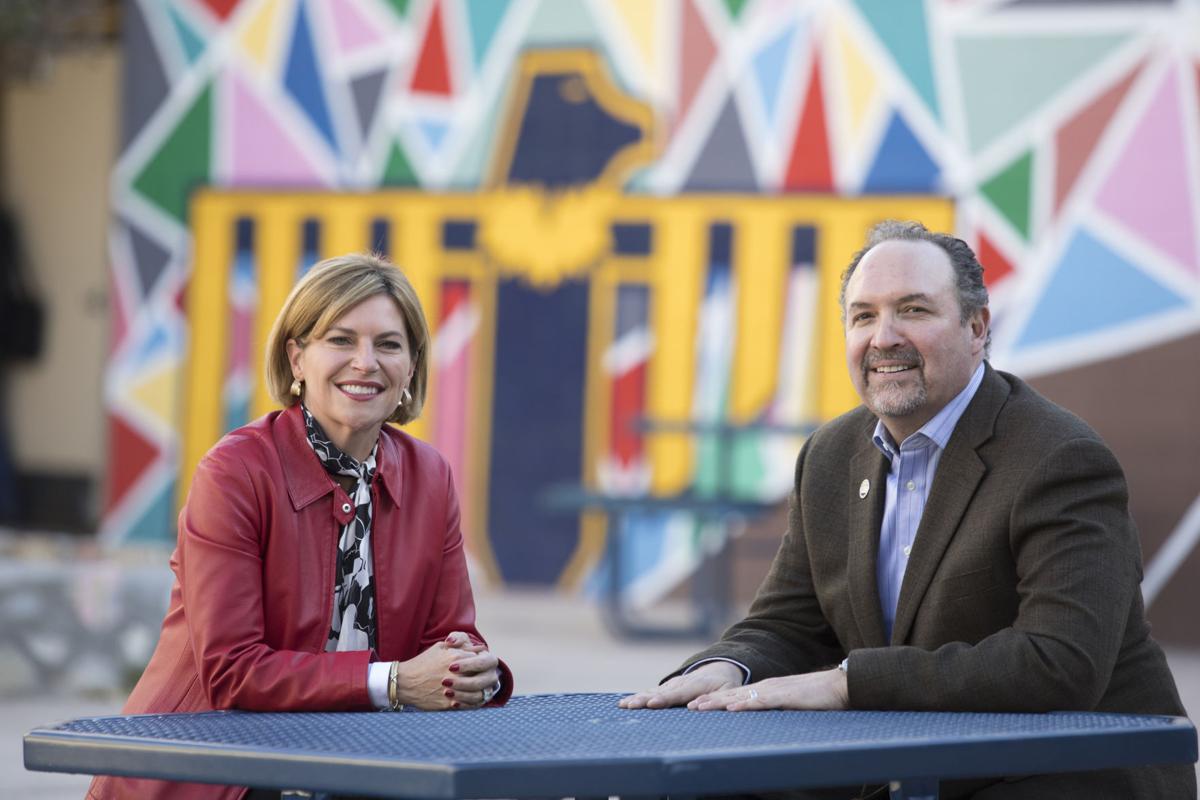 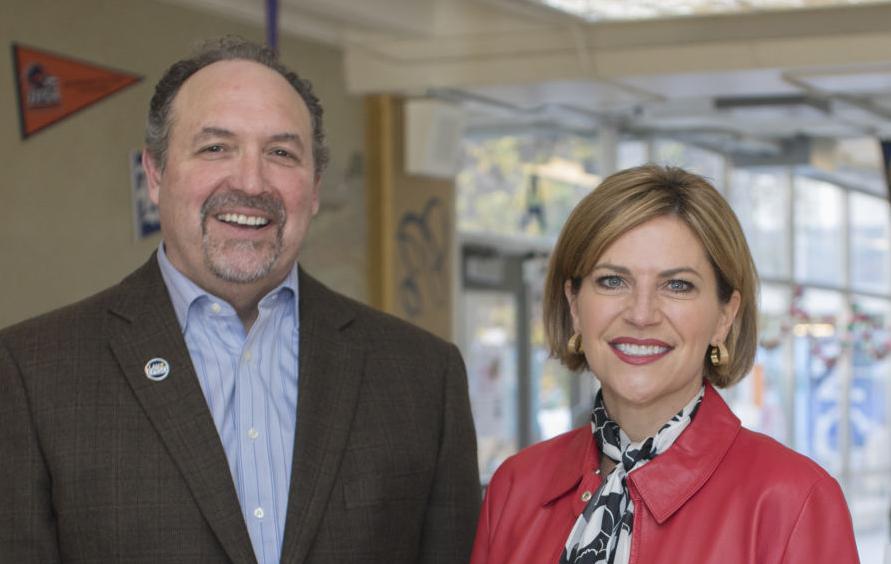 Dori Fenenbock and Juan Cabrera took a risk – a big risk – as the public faces of the biggest school bond proposal the city had even seen. They talk about building support, its surprising passage and rebuilding a district struggling with its past.

Dori Fenenbock and Juan Cabrera took a risk – a big risk – as the public faces of the biggest school bond proposal the city had even seen. They talk about building support, its surprising passage and rebuilding a district struggling with its past.

For voters in El Paso, there was more than one surprise on Nov. 8.

But the really big surprise was voter approval of the $669-million bond proposed by the El Paso Independent School District – the city’s biggest-ever bond.

Many had doubts about the proposition’s chances, but when the votes were counted, 55 percent of voters said yes to the bond and the tax increases it will bring.

For their roles in the bond’s passage, school board President Dori Fenenbock and Superintendent Juan Cabrera are El Paso Inc.’s El Pasoans of the Year for 2016.

Cabrera has been EPISD’s very nontraditional superintendent since 2013. Fenenbock was elected last year to the board of trustees, whose members promptly elected her president.

Together, Fenenbock and Cabrera became the front and the faces of the effort to persuade voters to take a chance on the school district’s new leadership.

Suddenly, it was no longer about EPISD’s past but about its future, at a time when things are looking up for El Paso.

“It’s just another really, really strong message to deliver when we travel across the nation and talk to people about why El Paso’s such a great place to be,” said Richard Dayoub, president and CEO of the Greater El Paso Chamber of Commerce.

A defeat at the polls would likely have put the city on a very different road, a harder one, at just the wrong time – not only for education and students in El Paso’s largest school district but also for the city’s economy.

Of course, Fenenbock and Cabrera don’t take all the credit for the bond’s approval. The voters did that, and many campaigned for it with donations and feet on the ground.

But these two were out in public, doing everything they could to make it happen, going everywhere together to tell people what a difference $669 million would mean for education and for El Paso.

Last year, El Paso Inc.’s Community Spirit Award honorees were the four local members of a school board of managers appointed by the state. They ran the district for two years and cleaned up the mess left behind by the worst academic cheating scandal Texas ever saw.

Now with Fenenbock leading the elected board that replaced the state appointees, and Cabrera as the district’s out-of-the-box superintendent, they are honored for the work they’ve done and for the emphasis they’ve put on quality education.

After seeing the city struggle with its major quality of life bond projects, it’s reasonable to ask if EPISD’s board and administration will have better luck.

The trustees want to hire Jacobs Engineering, the firm that performed the original study of the district’s building and equipment needs, to oversee design and construction at the schools.

“This is their wheelhouse,” Fenenbock said. “They manage billions and billions worth of projects like this.”

Last Tuesday, trustees named 20 private-sector community leaders to the bond accountability committee that will to keep eyes on the projects as well.

Elementary and middle schools will see millions more for new construction and improvements, as some are consolidated or closed because of El Paso’s dwindling student enrollment.

The district will also buy new buses and nearly 10,000 laptops to help students become proficient with the tools of today and tomorrow.

Fenenbock, the board and Cabrera promise all of the projects would be in place in five years, which seems the kind of tall order that the district had not kept before.

They’ve also promised that this time will be different.

“We’re going to be selling our first tranche of bonds, $200 million, next month,” Fenenbock said.

“We’ll be in design phase in the spring, and we’ll be letting contracts early fall next year and probably breaking ground at the end of next year or the beginning of 2018.”

What has Cabrera excited are the coming changes in classrooms and teaching methods that this former software executive thinks will help the district turn out students who are prepared for the future.

“We’ve never been in a better position to help our students achieve and to deliver classrooms and great classroom space that emulate the 21st-century workplace,” he said.

That includes speaking at least two languages, and EPISD is pushing ahead with districtwide dual language instruction in English and Spanish to ensure they are not only fluent but fully literate as well.

After years of corporate work overseas, Cabrera settled into an education law practice in Austin and could have stayed there. Instead, he looked at El Paso, where he has family and where he knew the school superintendent job was vacant.

Given all that had happened at EPISD – and with investigations by the FBI and Texas Education Agency still underway – it wasn’t likely that a top notch, traditional superintendent would be interested.

“As I read about what had occurred here, it seemed to me that for such a large district and employer, it was just a travesty that this thing was going on,” he said.

“I figured that even if I didn’t gain any success out of it myself, at least I could be part of the stepping stone to getting the district going in the right direction, then I would feel like it was time well spent.

“That’s all I sought when I came. I didn’t expect that we would have the kinds of success that we had in a short term. As I’ve learned, the harder you work, the luckier you get sometimes.”

Fenenbock added, “People forget that both of his parents are educators. His first job was as an elementary teacher and he was a school law attorney. So he had the opportunity to observe good governance and to become familiar with the trends in education.

“I think he had all the elements of a wonderful superintendent that really came into fruition. We’re proud of his leadership and ability.”

In 2015, Fenenbock was spending a lot of volunteer time at Coronado High School and serving on the Camino Real Regional Mobility Authority when she decided to run for school trustee.

“I just wanted to make a difference in student outcomes,” she said. “I was on the facilities committee before, so I knew we had dire facilities needs that had to be addressed.”

She had no idea she would wind up playing the leading role she took on in the bond election, and said she wasn’t the only member of the board who campaigned hard.

“I know that all seven trustees were responding with emails, phone calls and personal visits to anybody who had questions, the process and how we got there,” she said.

The other members of the EPISD board are Bob Geske, Al Velarde, Susie Byrd, Diane Dye, Chuck Taylor and Trent Hatch.