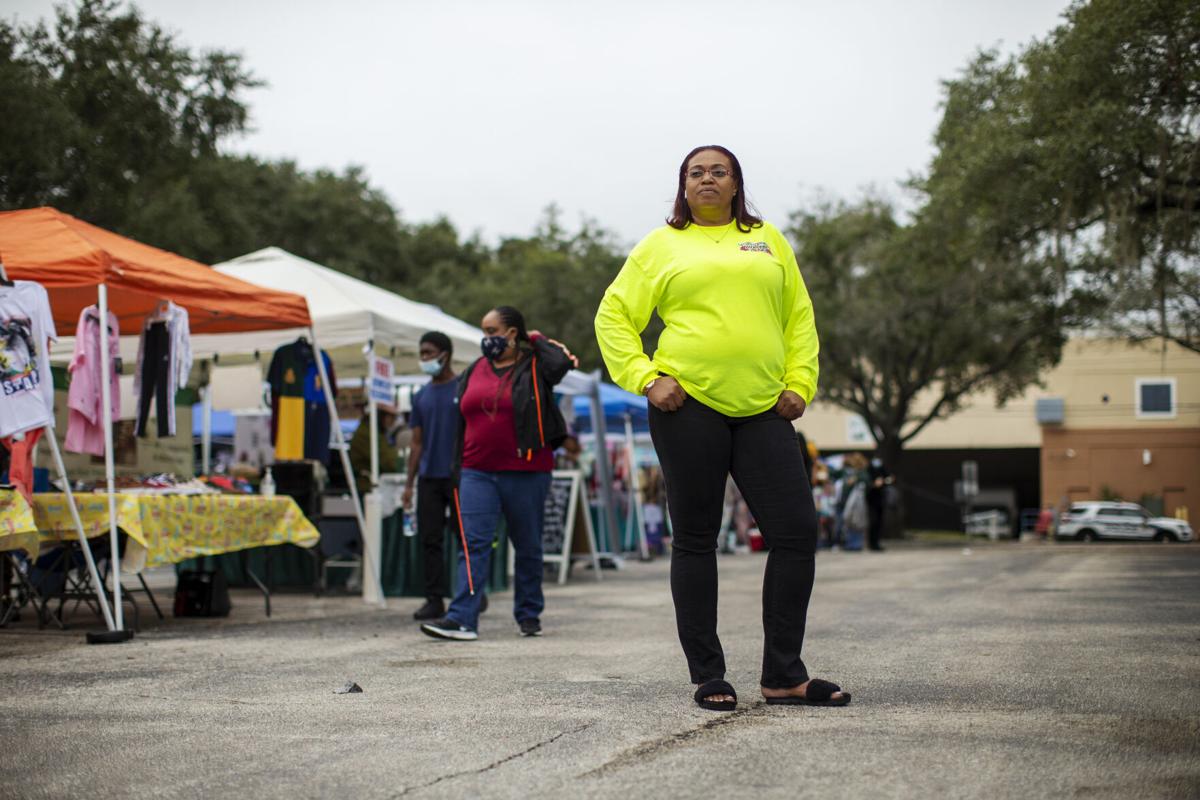 Renee Edwards created Saturday Morning Shoppe in St. Petersburg, Fla., which recruits vendors who are women and people of color, giving them a place to sell their wares. 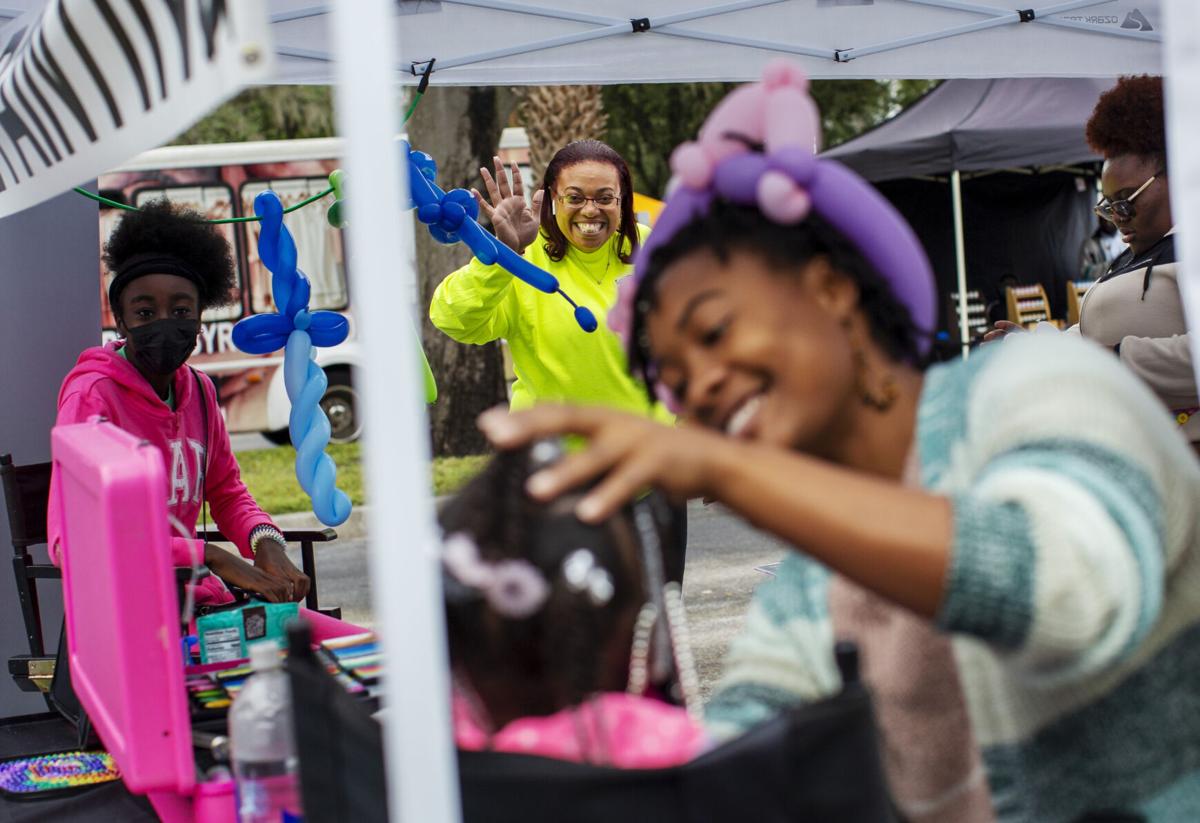 Edwards left her job as a clinical researcher after 18 years.

Renee Edwards created Saturday Morning Shoppe in St. Petersburg, Fla., which recruits vendors who are women and people of color, giving them a place to sell their wares.

Edwards left her job as a clinical researcher after 18 years.

Renee Edwards has wanted to be her own boss since she first heard the name Warren Buffett.

“I’ve been following him for a long time,” she said of the Berkshire Hathaway CEO and revered investor. “And the thing that always stuck out for me is him saying something like, ‘You’ll never live comfortably unless you work for yourself.’”

In October, Edwards, 45, made the jump. After 18 years as a clinical researcher at the Roskamp Institute, a pharmaceutical testing company in St. Petersburg, Florida, she quit her job to start Saturday Morning Shoppe, a monthly outdoor market featuring vendors who are women and people of color. Buffett’s prognostications aside, not everyone would have encouraged her to bet on herself. Especially because she made the bet by emptying her 401(k).

Edwards, a single mother of three, invested the $5,000 she had saved for retirement to pay for marketing and make a donation of $500 to hold her market on the Emmanuel Baptist Church grounds in St. Petersburg. She knew it was a risk.

“That was my only savings,” she said. “Because I had so many expenses, I always made the minimum deposits” in Roskamp’s retirement savings plan. Withdrawing the money came with a penalty in addition to the several sleepless nights it cost her. She paid the 10% penalty the IRS levies for cashing in retirement savings before you turn 59 1/2.

Her financial adviser, Toriano Parker, provided a measure of comfort. “Instead of talking me down about using my 401(k), he said, ‘You should do it,’” she said. Her age, which afforded her time to replenish her retirement savings, was a factor in his approval. So was her research into Saturday Morning Shoppe’s potential profitability. “Renee had a very solid business plan,” Parker said.

He said he wouldn’t have supported other clients’ betting the bank on a startup. “You really have to weigh the decision to drain an account like a 401(k), or any retirement account, very carefully,” he said. “For most people, it’s too much of a risk.” A flood of new entrepreneurs since the start of the pandemic may not have gotten the memo — including those who are starting the second or third chapter of their career and might have had retirement in their sights.

From the second half of 2020 through May 2021, the Census Bureau tracked the highest number of applications to form businesses since the records started being kept in 2004, a recent report from the National Bureau of Economic Research found.

Bank loans and venture capital probably did not provide liftoff for most of those businesses. According to 2019 data from the Kauffman Foundation, a nonprofit that works to bolster education and entrepreneurship, nearly 65% of entrepreneurs use personal and family savings to fund their startups.

Edwards, who is among the surge in Black women who became entrepreneurs during the pandemic, suspected she would have trouble securing a loan and didn’t want to waste time trying. (Her concerns were not unfounded; Black entrepreneurs’ loan requests are one-third as likely to be approved as white entrepreneurs’, the Kauffman Foundation has found.)

Opportunity was knocking. “I knew all kinds of people in my community who were making things like skin creams and spice rubs, and they didn’t have anywhere to sell them,” she said. She also knew that people who had been shut in because of COVID-19 were eager to interact, especially in outdoor settings.

Saturday Morning Shoppe’s first installment was in April. Within 90 days, following a timeline Parker set up for her, Edwards paid herself back. She opened an individual retirement account and funded it with the same amount she had taken from her 401(k) and enough to cover what she had lost in penalties. (Although she did miss gains she could have reaped by staying invested in the stock market.)

By October, when she quit her day job, the market had mushroomed to 150 vendors from 64 and moved from the church parking lot to Tropicana Field, the home of baseball’s Tampa Bay Rays. In December, a second Saturday Morning Shoppe will open in Atlanta.

This is a path that many experts recommend against. “The first thing we tell people is absolutely not to tap into their retirement account,” said Elizabeth Isele, founder and CEO of the Global Institute for Experienced Entrepreneurship. Though Edwards is younger than the entrepreneurs over age 50 the institute is devoted to, Isele is wary of any risk to a secure retirement.

At the time she started her venture, Edwards fell into the category of the 43% who had less than $10,000 saved. “They’re vulnerable,” Isele added. “Women especially are in a deplorable position.”

Instead of tapping retirement funds, the institute advises crowdfunding to get a business off the ground. “If you put your idea out there on Kickstarter and no one is willing to invest even a dollar, you know before you put in a huge amount of time that it might not work,” Isele said. But if the idea proves popular, raising a few thousand dollars on a crowdfunding platform may be doable.

Noah Damsky, a principal at Marina Wealth Advisors in California who has worked with several would-be entrepreneurs considering drawing down their IRAs, has not set a policy of outright discouragement. “I don’t tell anybody what to do,” he said. Instead, he helps them see blind spots. “I’ll work out projections so they understand their risk profile.”

Marianne Nolte didn’t need that kind of help when she started Imagine Financial Services in Fallbrook, California, in 2020.

Nolte, 55, was already an entrepreneur when she decided she wanted to become a certified financial planner. For more than two decades, she had run a video production company.

“I thrive as a small-business owner,” she said. “That’s my happy place.” Acting as her parents’ informal financial adviser helped her discover an aptitude for money management. In 2014, she earned her license as a certified financial planner. Five years later, after working at an advisory firm to learn the ropes, she was putting together a business plan that involved tapping her IRA.

“It wasn’t a huge amount of my portfolio,” Nolte said. “But it was enough that I got a slap on the hand from the IRS,” meaning the same 10% penalty Edwards paid for taking the early withdrawal. She does not regret it. Still, she would not advise most clients to follow her lead. “My path was not just the result of needing a change in the middle of COVID. I had a solid plan in place and had crunched the numbers.” Armed with her license, she also had a good reason to trust her instincts when it comes to her financial health.

Ellen Curtis had experience with startups when she started the custom denim jacket company Statement by Ellen C. in 2020, too. But Curtis, 77, who closed a private nursing company she ran in Los Angeles, Curtis Concierge Nursing, to protect her health at the start of the pandemic, was not as focused as Nolte on aligning every decimal point.

“This time I didn’t have a business plan,” she said. The $8,000 of personal savings she invested in making batches of appliquéd jackets to sell was a gamble, one she considered safe because it didn’t involve digging into her investment accounts. Starting a business during the pandemic has proved more challenging than she thought, and she is not sure when, or if, she’ll feel financially secure enough to fully retire. “I haven’t made a profit yet,” she said. “It does feel like I took a risk.”

Before cracking your nest egg

Here are some tips on what to consider before dipping into retirement funds to open a business.

Plan ahead. “If you have a mortgage, make sure you have six months of mortgage money reserved, in addition to emergency money,” Parker said.

Start small. “You should take a small bite at first, like a trial run,” Parker said. Edwards’ start in the church parking lot before moving to Tropicana Field is an example.

Make sure you’ve found a niche. “Your idea should be very innovative, or something that’s needed,” like a bakery in a town that has no bakery, Parker said.

Consider the best-case and worst-case scenarios. “The worst feeling is often the unknown, so take the time to consider how bad it might get” if a new business fails, Damsky said. “The result could actually be peace of mind.”

Decide whether you’re willing to become an employee again. Damsky recommends a backup plan that includes returning to work for a few years if the new business doesn’t pan out.

Do the math. Remember, if you dip into a 401(k) before age 59 1/2, you could owe taxes and penalties on the money, in addition to losing out on the potential investment interest gains you could have made by leaving the money there.