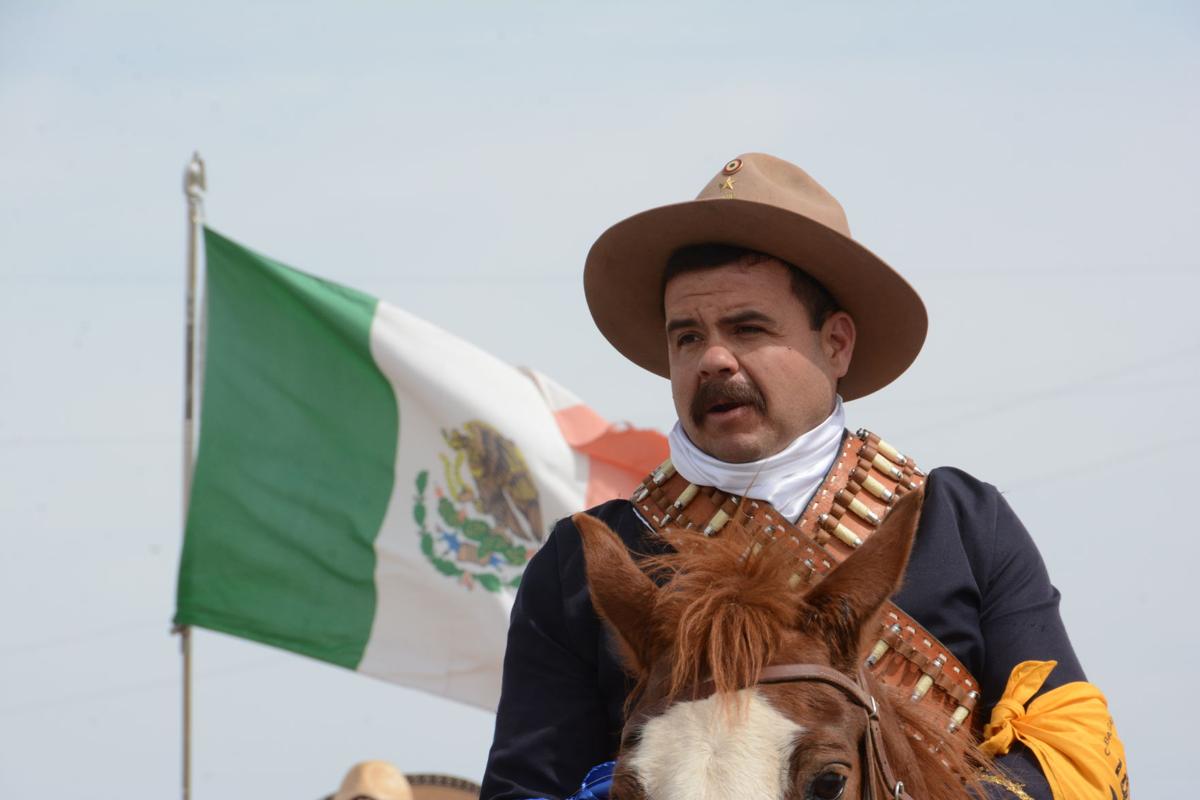 In Columbus, New Mexico, Rafael Celestino was dressed as Pancho Villa, with crossed ammunition belts and a huge hat, for the cabalgata. 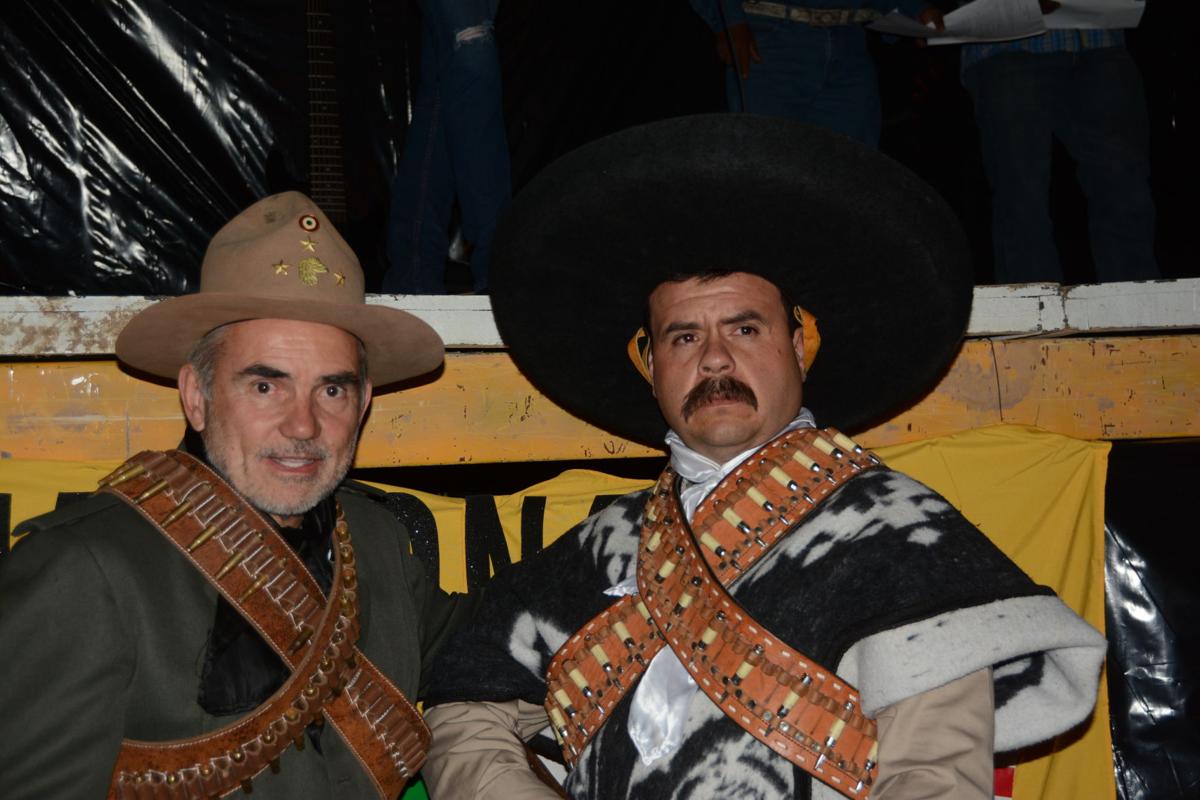 Eduardo Escobar Saracho, on the left, portrayed Gen. Pershing. Celestino, on the right, dressed as Villa. 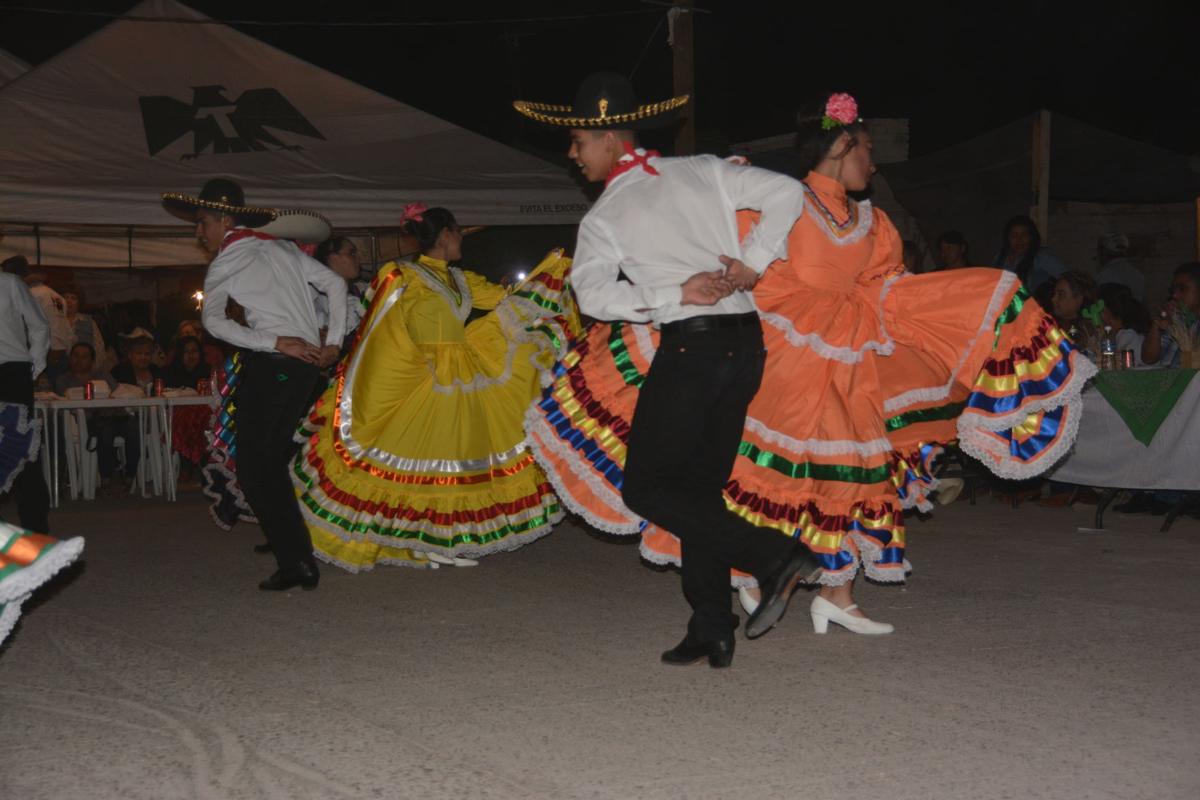 Folk dancers in traditional costumes entertained at a fiesta that was part of the 19th annual cavalcade. 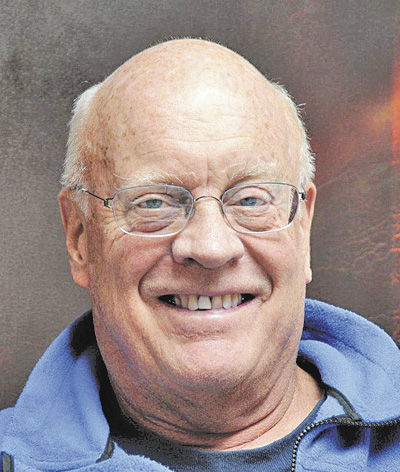 In Columbus, New Mexico, Rafael Celestino was dressed as Pancho Villa, with crossed ammunition belts and a huge hat, for the cabalgata.

Eduardo Escobar Saracho, on the left, portrayed Gen. Pershing. Celestino, on the right, dressed as Villa.

Folk dancers in traditional costumes entertained at a fiesta that was part of the 19th annual cavalcade.

COLUMBUS, New Mexico – On March 9, 1916, troops of Gen. Francisco “Pancho” Villa invaded Columbus, New Mexico. It was a disaster for Villa, as his forces suffered many more casualties than the American troops of the 13th Cavalry, commanded by Col. Herbert Jermain Slocum.

And it resulted in what was called the Punitive Expedition led by Gen. John J. Pershing, who spent many futile months chasing – but not finding – Villa.

This was the first time the U.S. Army used trucks and airplanes and, if nothing else, served as important training for World War 1. George S. Patton was a first lieutenant then and served as Pershing’s aide.

Now at a time of heightened tensions between the United States and Mexico, the name Pancho Villa has come up again, but this time in terms of reconciliation. The event is the Cabalgata, or Cavalcade, Binaciónal Villista, and its theme is Uniendo Fronteras de la Sierra al Desierto, or Uniting Frontiers from the Mountains to the Desert. This year’s cabalgata, the 18th, took place March 11.

Hundreds of riders – men, women and children – rode north to Palomas from a variety of Mexican towns to the south. Some riders were on horseback for a week or more.

On Friday evening March 10, they gathered in Palomas and celebrated their arrival with a unique fiesta in the town plaza. Palomas, population 4,500, was packed – horses, riders, locals all dressed up, kids enjoying carnival rides and games.

The high point of the fiesta was, as always, a series of beautiful folk dances. Certificates, or reconocimientos, were given to the riders who represented the many towns and cities from which the riders had come, as well as several mayors from the towns to the south.

The burly Rafael Celestino spoke, dressed as Pancho Villa with crossed ammunition belts and a huge hat. With him was Pershing, portrayed by Eduardo Escobar Saracho. They come all the way from Durango, Villa’s birthplace, more than 700 miles to the south.

On Saturday morning, the Mexican riders crossed the border and were given a blessing by sun dancers of Apache descent led by Gil Aguilera from Mimbres, New Mexico. Several of them had earlier been to Standing Rock, and they had also done this blessing at the cabalgata for several years. Aguilera stressed the importance of doing a prayer on the border to show spiritual unity.

Then these Mexican riders joined up with riders who had ridden south from Columbus, and formed a cavalcade to return to Columbus where there was another fiesta.

I have been to the cabalgata for the last four years; it always takes place on the Saturday closest to the date of Villa’s raid. Last year was special – it was the 100th anniversary of his raid.

On that preceding Friday I drove south from Palomas, talked to many of the riders and showed them a Donald Trump piñata that caused much laughter. Now that Trump is president and not just a piñata, it seemed important to go this year and see how the riders were reacting to this change. If ever there has been a test of U.S.-Mexico relations in recent years, it is now.

The answer? There was little reaction. I was one of the very few Anglos at the fiesta Friday night – and I was very visible because of my camera. Nevertheless, I was treated with the same courtesy I’d always experienced. These riders – especially the Mexicans who have ridden many miles to participate – are committed to the theme of uniting frontiers, from the mountains to the desert. If only their example of unity were more present in our country.

Morgan Smith writes frequently on border issues and can be reached at Morgan-smith@comcast.net.