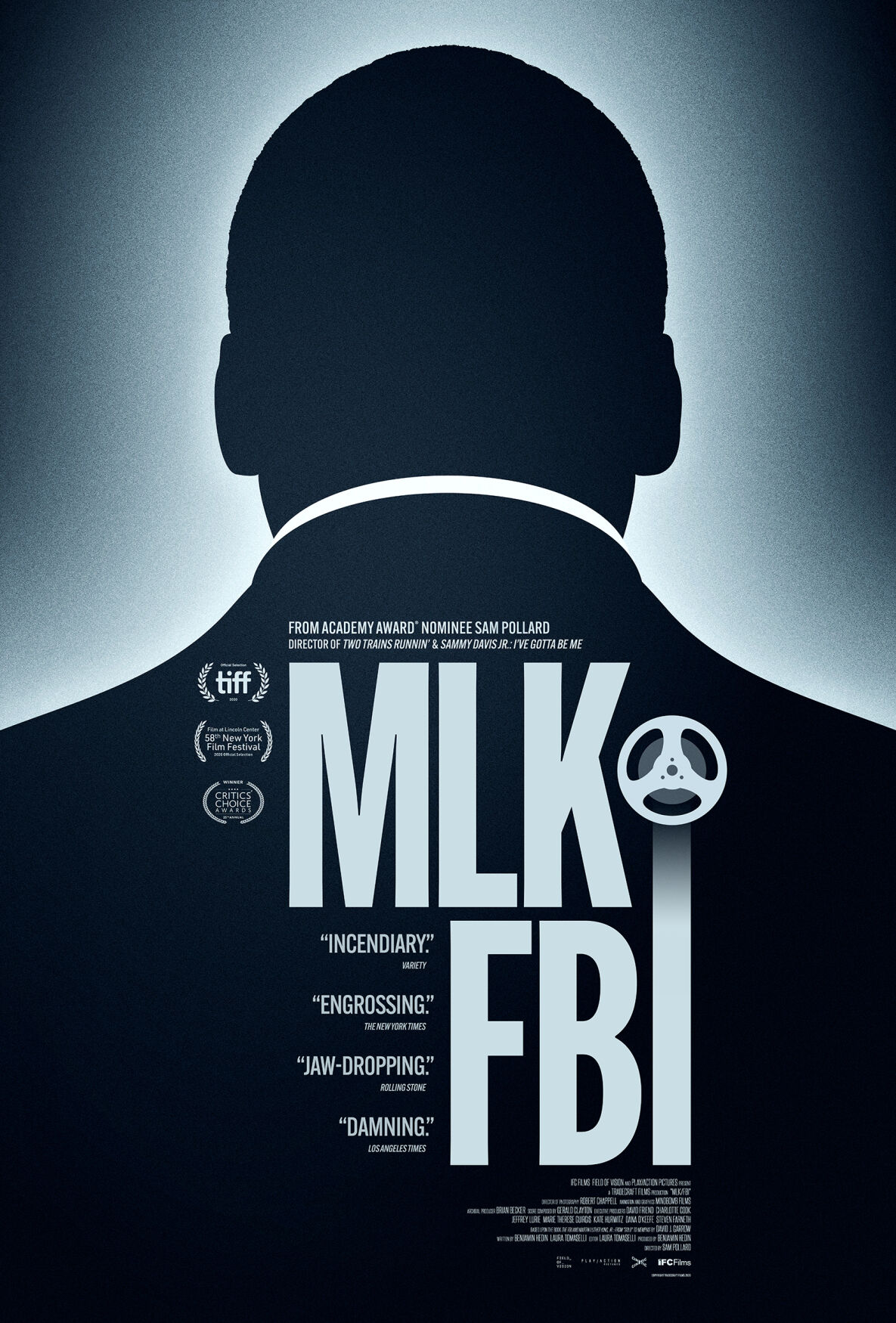 Poster art for ‘MLK/FBI,’ a documentary by director Sam Pollard 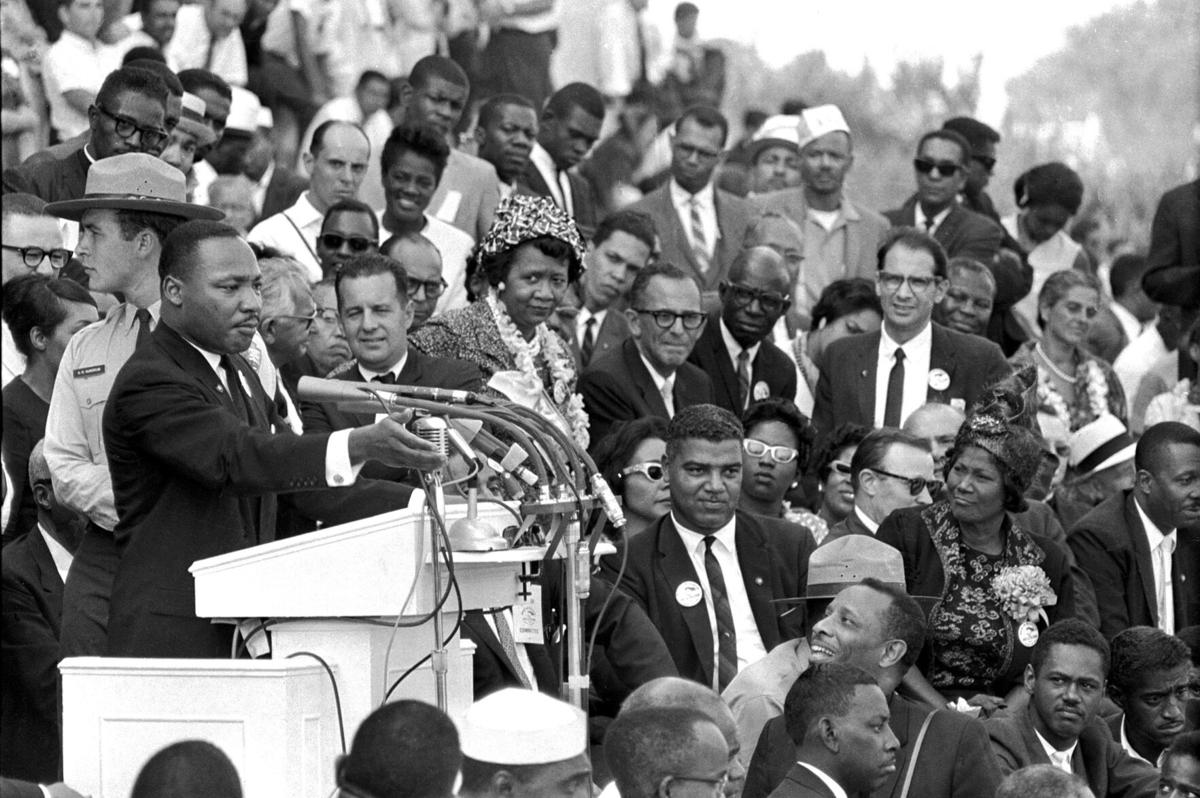 In this Aug. 28, 1963, photo, the Rev. Dr. Martin Luther King Jr. speaks to thousands during his ‘I Have a Dream’ speech in front of the Lincoln Memorial in Washington.

Poster art for ‘MLK/FBI,’ a documentary by director Sam Pollard

In this Aug. 28, 1963, photo, the Rev. Dr. Martin Luther King Jr. speaks to thousands during his ‘I Have a Dream’ speech in front of the Lincoln Memorial in Washington.

There’s an iconic photograph of the Rev. Martin Luther King Jr. that was taken as he triumphantly boarded one of the first integrated buses in Montgomery, Alabama.

It was 1956 and King looks out a window, firmly at the front of the bus, almost gazing toward his movement’s next big social hurdle. The image was taken by Ernest Withers, a key chronicler of the civil rights movement — and an FBI informant.

That the FBI wanted someone close and watching King is at the heart of director Sam Pollard’s engrossing documentary “MLK/FBI,” a film that artfully explains how the two sides of that slash came to be enemies.

Pollard is a veteran producer and filmmaker who co-directed two episodes of “Eyes on the Prize” and earned an Oscar nomination for editing Spike Lee’s blistering 1997 film “4 Little Girls.”

In “MLK/FBI,” Pollard explains how J. Edgar Hoover used the full force of his federal law enforcement agency to attack a progressive, nonviolent cause. That included wiretaps, blackmail and informers, trying to find dirt on King.

There is nothing terribly new in the telling, no huge revelations or bombshells. Most of the details — including King’s infidelity and the use of Withers as an FBI informant — have been known for years.

But that’s not Pollard’s interest.

His canvas is large, stretching back to post-Civil War Jim Crow, exploring how notions of Black sexuality were turned into social weapons and into the way FBI agents were made mythical in popular culture.

Pollard is patient and thoughtful, leaning his film on David J. Garrow’s book “The FBI and Martin Luther King Jr.: From ‘Solo’ to Memphis.” The most salacious stuff must wait until three-quarters through, until the filmmaker has pulled all the historical threads together. Then the picture is clear — and frightening.

King’s famous March on Washington took place on Aug. 28, 1963, and two days later, in a memo, William C. Sullivan, the head of FBI domestic intelligence, wrote, “We must mark him now as the most dangerous Negro in the future of this Nation,” adding, “and we must use every resource as our disposal to destroy him.”

There are lessons for 2021, for sure. Having Communist leanings in the ’50s and ’60s was as smeared as the socialism of today. “I Am a Man” placards at protests echo the “Black Lives Matter” signs of today. White America’s anxieties around Black empowerment have not changed much.

“MLK/FBI” has a different feel than traditional documentaries, eschewing the usual pattern of old footage punctuated by talking heads, in favor of just footage and soaring songs, like “Lord Don’t Move the Mountain” by Mahalia Jackson and “Oh Freedom” by Harry Belafonte.

Pollard has interviewed historians, journalists and participants but we mostly only hear them. That means the commentary of someone like Andrew Young — a civil rights hero himself, a King confidant and longtime politician — gets mixed in and on par with a historian who has no first-hand knowledge. Something about that is off.

The film is ultimately crippled by something out of the makers’ control. We are told that after the FBI makes a salacious tape and sends it to King’s wife, King “undergoes a real emotional crisis. And it’s an emotional crisis that the FBI is listening in on.”

But we can’t listen to any of it. All surveillance tapes are under seal and the earliest they can be released is 2027.

Pollard also offers threads of interesting avenues only lightly explored, like what happens when those secret King recordings are made public. Some feel that historians may be complicit if they investigate information that they shouldn’t have in the first place. And Hoover’s personal life as a motive for his anger at King is only lightly described.

But those are questions for another time.

For now, watch “MLK/FBI” and marvel at how a man could inspire so much and keep his cool while a vise was closing all around him.

“MLK/FBI,” an IFC Films release, is not rated but has footage of bloodied protesters and descriptions of sex, including rape. Running time: 102 minutes. Three stars out of four.