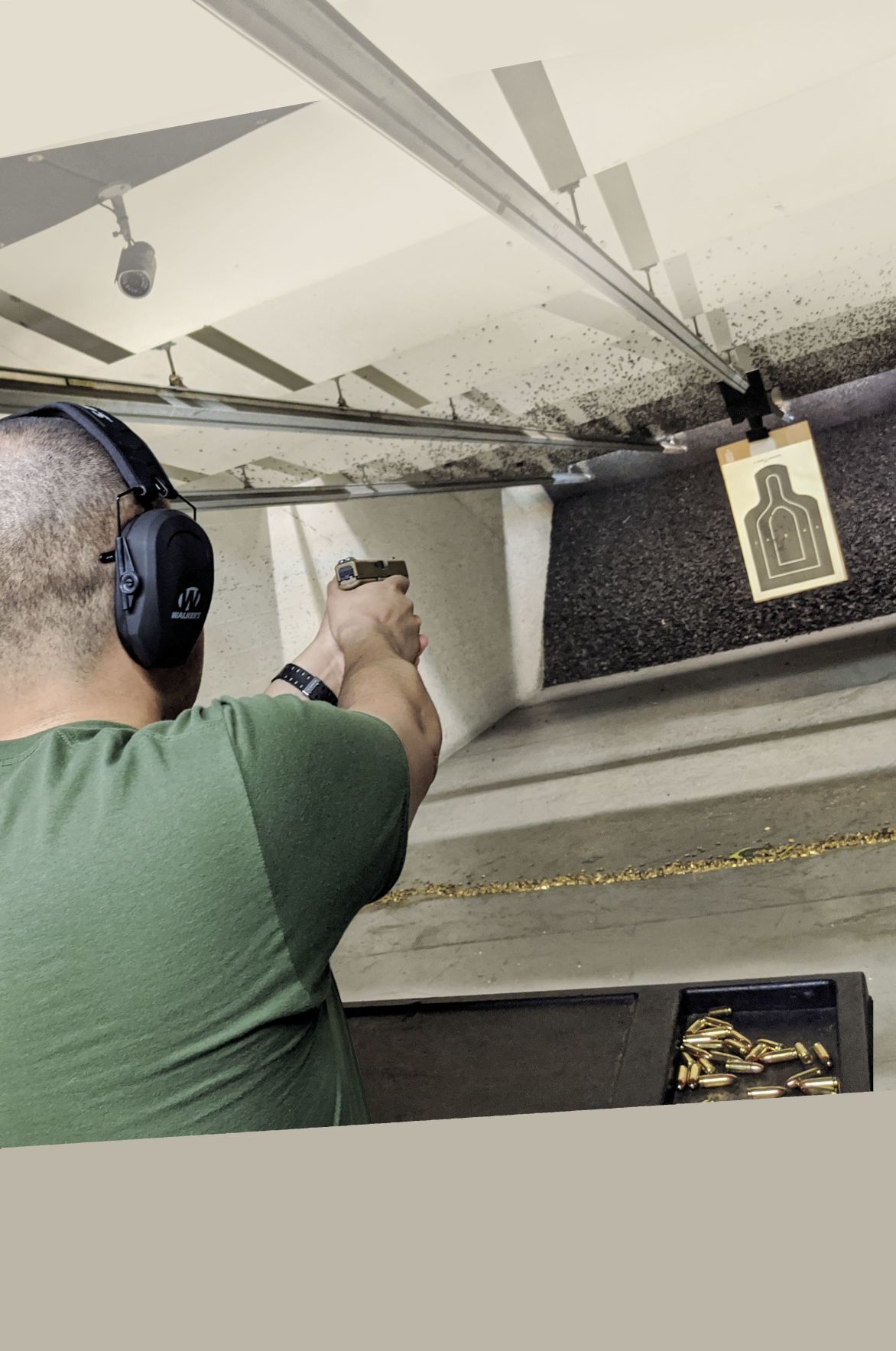 Army Cpl. Nazario Saucedo works on his shooting skills before the pandemic at Gun Central, one of several recreational shooting ranges that have since reopened to the public. 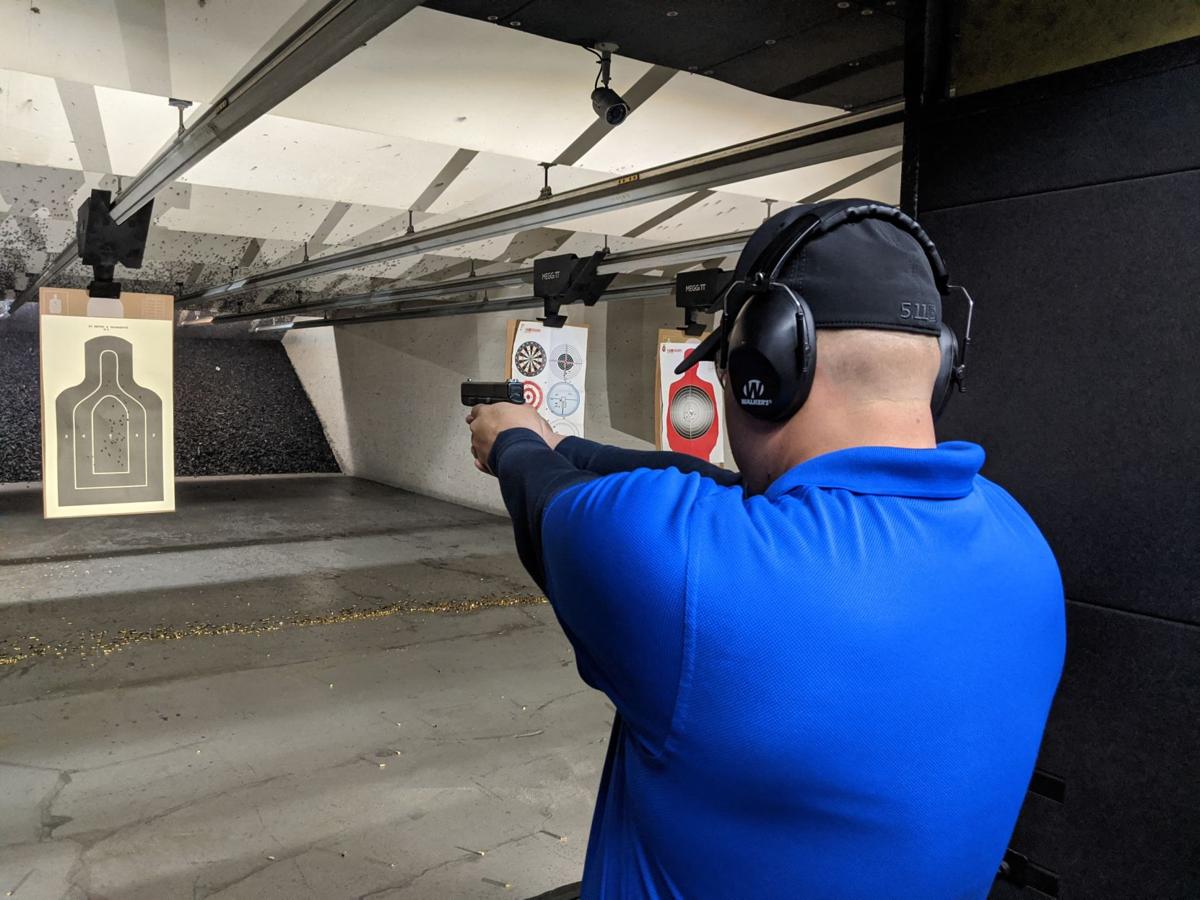 Army Sgt. Adolfo Uribe shoots off some rounds at Gun Central before the pandemic. 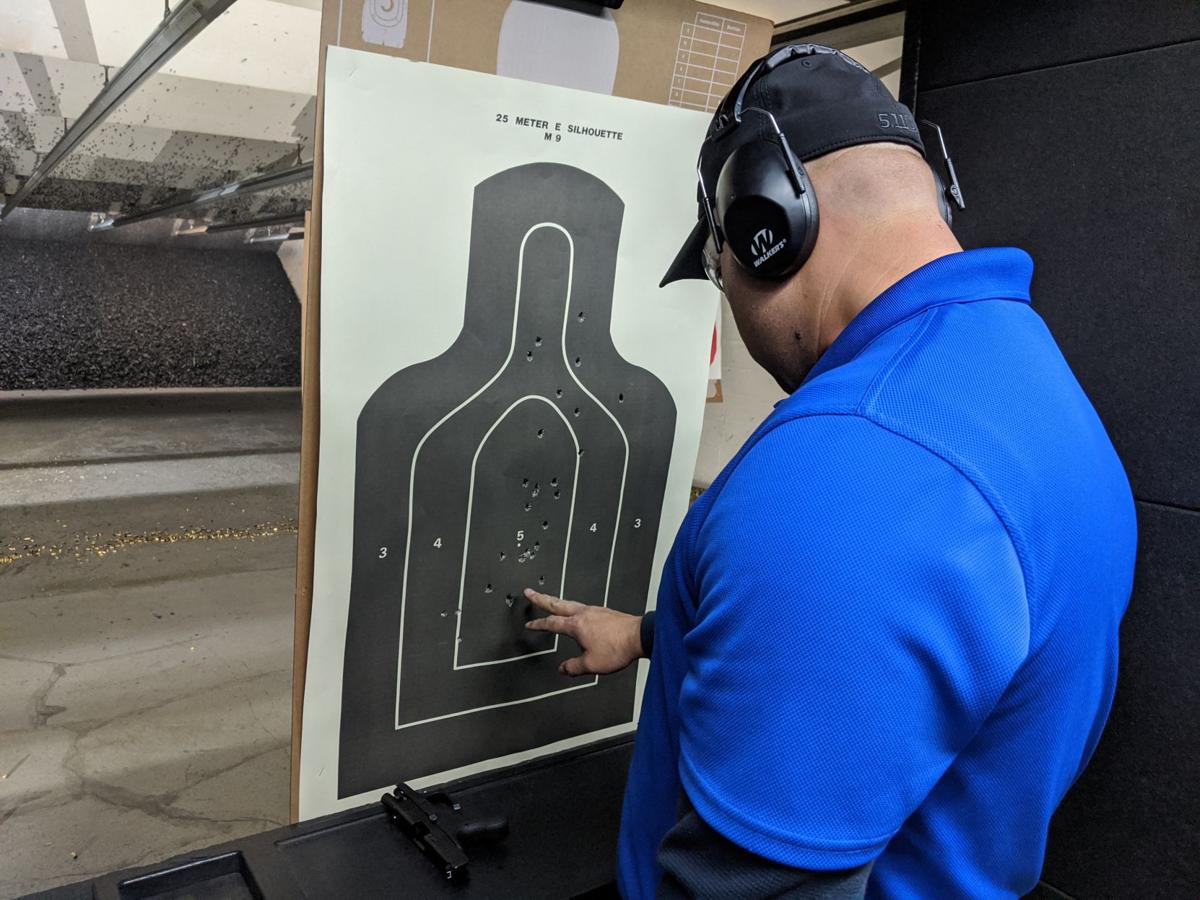 Army Sgt. Adolfo Uribe takes a look at his target at Gun Central during a trip to the Central El Paso shooting range before the pandemic. 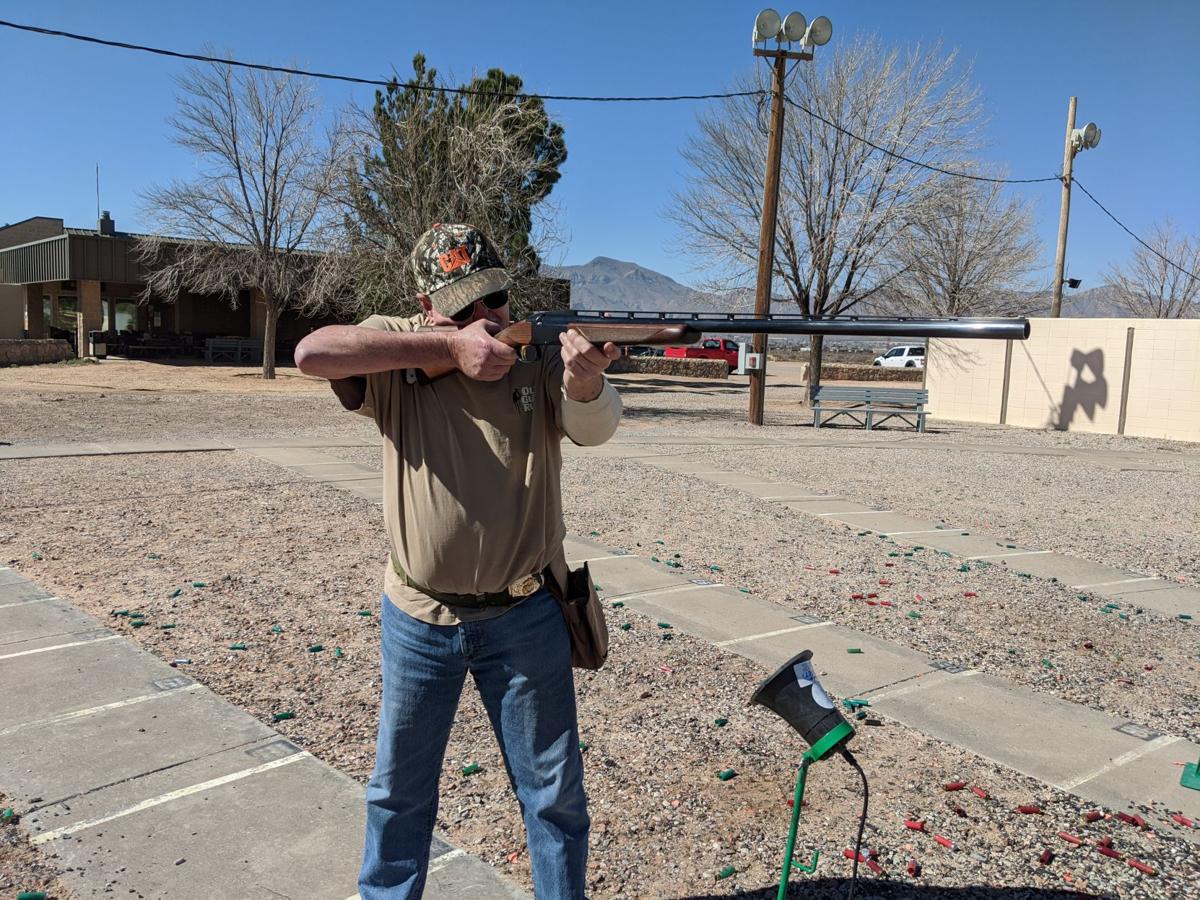 Dave Teague fires a shotgun at the Fort Bliss Rod and Gun Club before the COVID-19 pandemic. 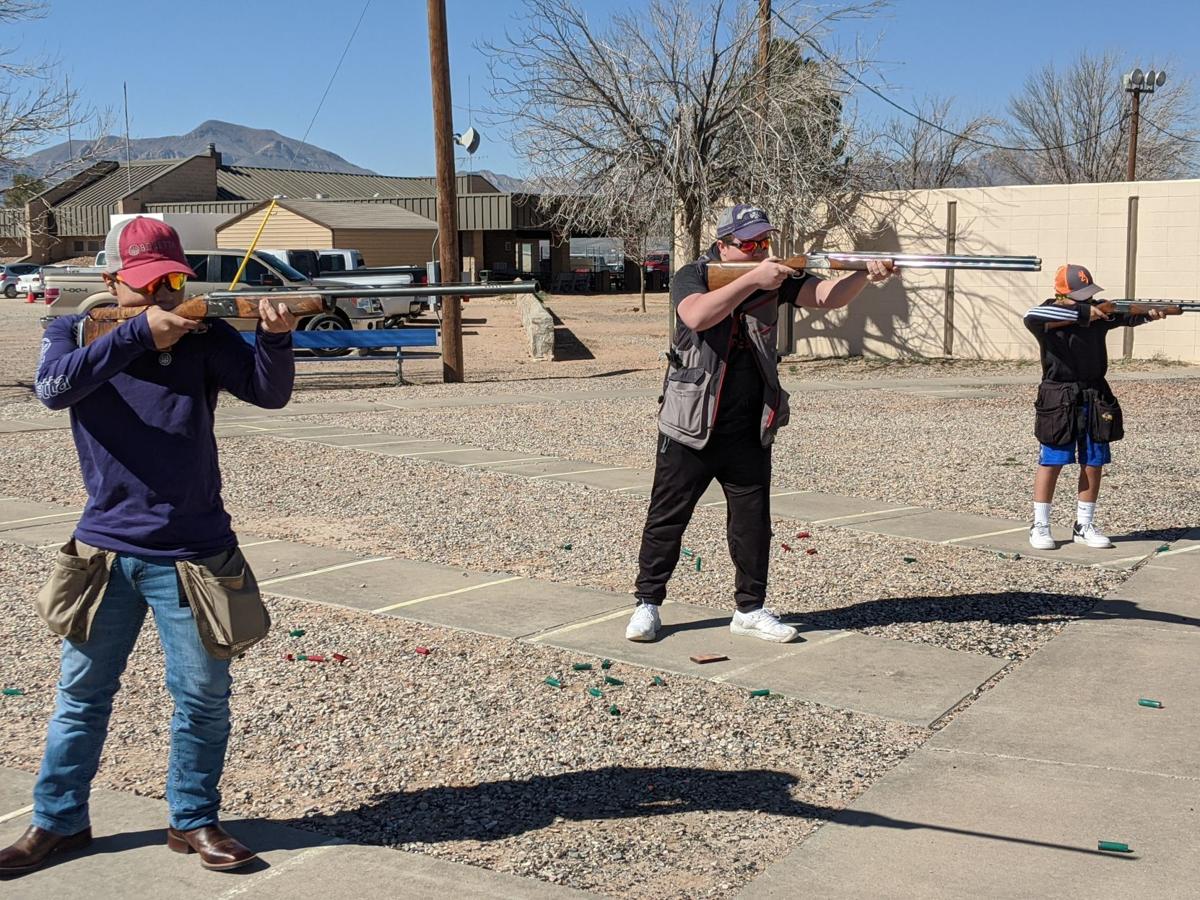 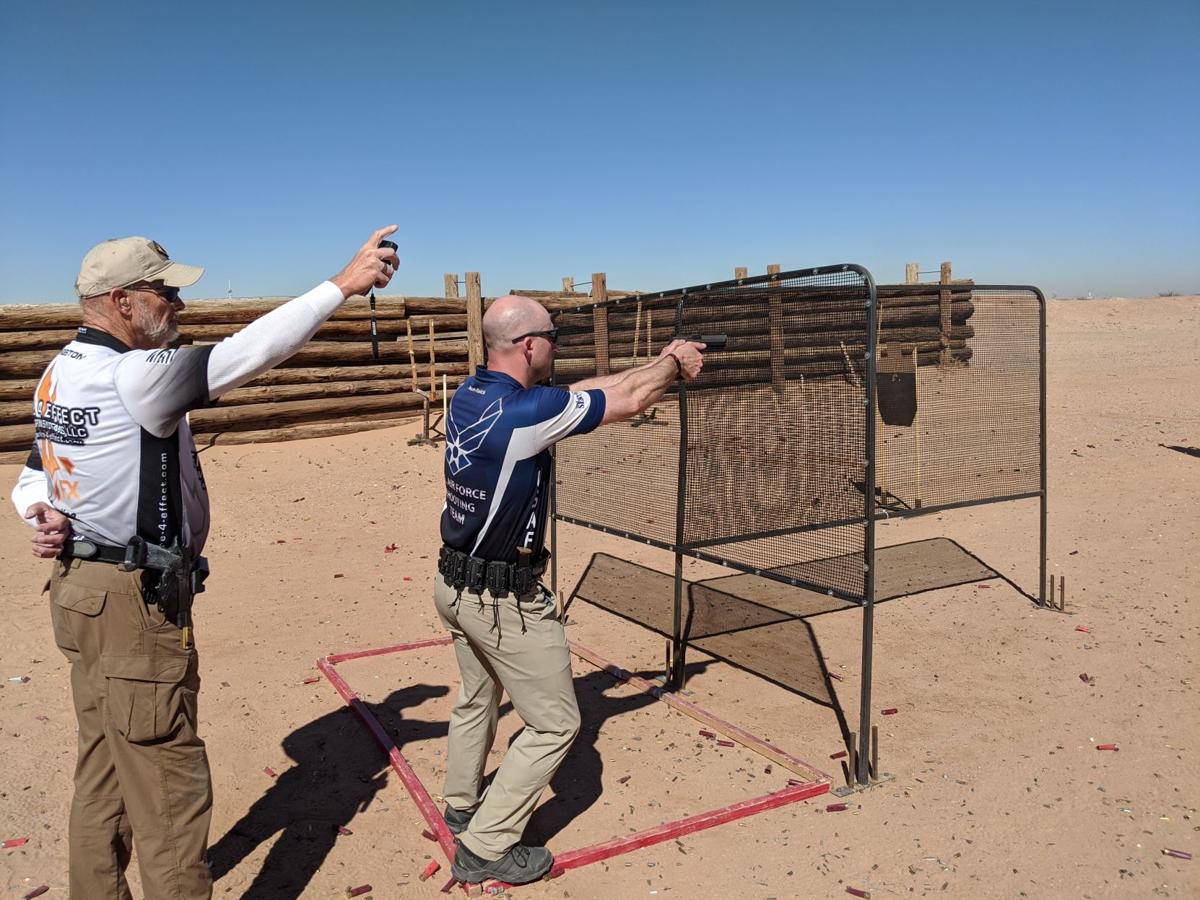 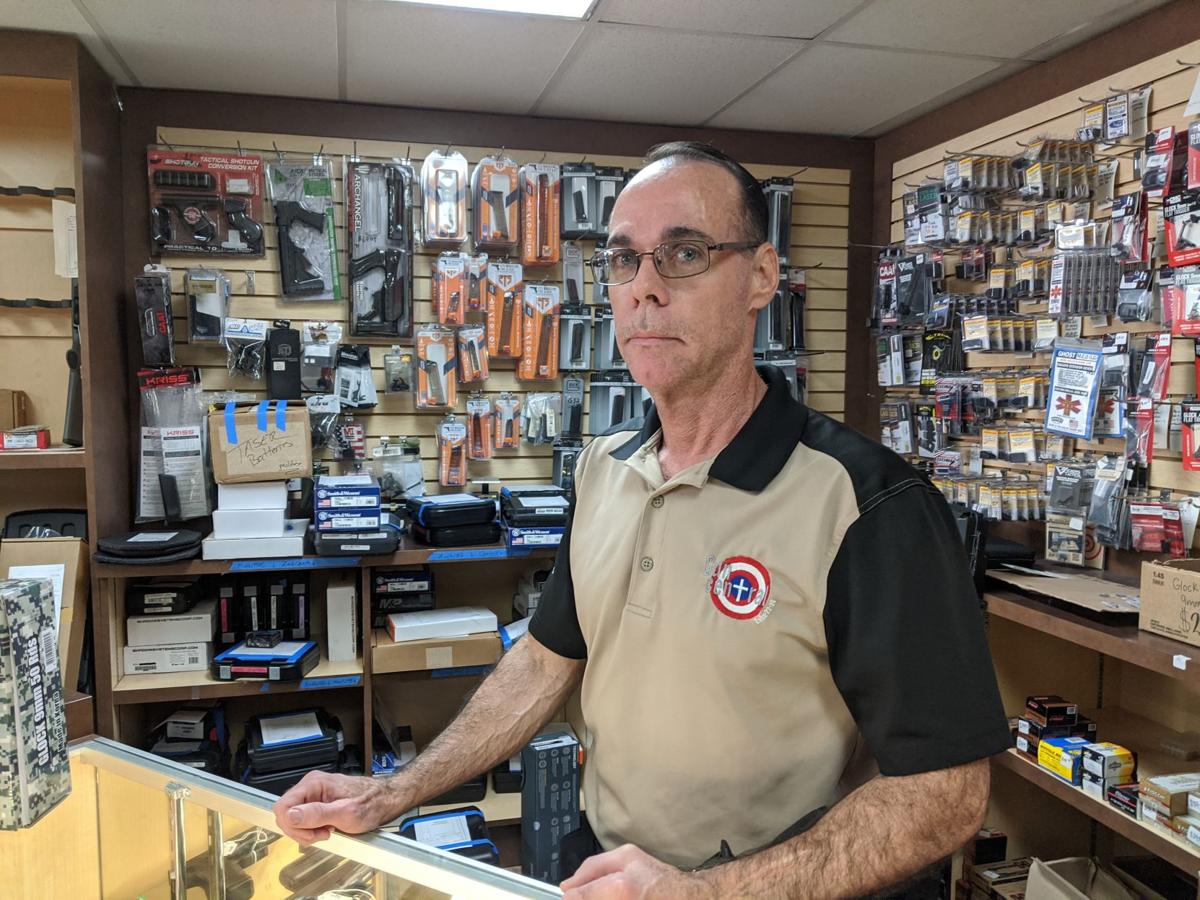 Gun Central owner Mike McIntyre says he and his family strive to create a safe, fun place for people to practice their shooting skills and learn about gun safety.

Army Cpl. Nazario Saucedo works on his shooting skills before the pandemic at Gun Central, one of several recreational shooting ranges that have since reopened to the public.

Army Sgt. Adolfo Uribe shoots off some rounds at Gun Central before the pandemic.

Army Sgt. Adolfo Uribe takes a look at his target at Gun Central during a trip to the Central El Paso shooting range before the pandemic.

Dave Teague fires a shotgun at the Fort Bliss Rod and Gun Club before the COVID-19 pandemic.

Gun Central owner Mike McIntyre says he and his family strive to create a safe, fun place for people to practice their shooting skills and learn about gun safety.

The COVID-19 pandemic has had you cooped up at home for a couple of months and limited to doing only essential activities.

But now you want to blow off some steam or try something new and exciting.

Borderland shooting ranges have reopened and offer a perfect opportunity for the experienced recreational shooter to get back to their favorite sport or for the novice to try something new.

For a couple of off-duty Fort Bliss soldiers and many other like-minded sportsmen, going out shooting is a fun but challenging way to spend an afternoon.

Before the pandemic hit, Cpl. Nazario Saucedo and Sgt. Adolfo Uribe, both with the 131st Field Hospital, visited Gun Central in Central El Paso. It is a full-service gun store and indoor shooting range.

“We enjoy shooting,” said Saucedo, who is from Riverside, California. “It is one of those pastimes that get my adrenaline going. The better you get, the more you want to do it.”

Saucedo said going out and shooting some targets for fun not only helps them be better soldiers but also helps them de-stress.

In particular, it forces you to be “in the moment” and not worry about the past or future, he said.

“When you go shooting, it is important that you focus on everything that is going on around you,” Saucedo said. “You have to make sure it is safety first and you treat everything with caution, whether you are at an indoor or outdoor range.”

Uribe, from Queens, New York, says they don’t always get enough range time with their unit, so this is a fun way to work on their skills.

“Practice makes perfect and we come out here to get perfect,” Uribe said. “This is fun. We wouldn’t do it if it wasn’t fun.”

Gun Central, near Bassett Place, sells a wide selection firearms, accessories, targets and ammo. It also has an indoor shooting range, where shooters can practice their craft while out of the elements.

Gun Central never shut down its store during the pandemic but did close its range. It reopened on May 18.

Owner Mike McIntyre said they have incorporated many social distance and cleaning procedures to keep their clients and employees safe.

Over the years, McIntyre and his family have strived to create a fun, safe environment for people to learn about gun safety and to practice their shooting skills.

Their current offerings include License to Carry courses and one-on-one instruction.

People get into the sport of shooting for a lot of different reasons, besides wanting to defend themselves, McIntyre said.

“Being accurate. Having speed. There are levels you can work at,” he said. “Some people like to take their time and squeeze off a round at super long distance. Other people like to be able draw their weapon and get a round off really quickly.”

Others enjoy buying accessories and customizing their weapons, McIntyre said. “It’s like Barbies for grown men,” he said.

Gun Central isn’t the only place you can go to practice your shooting skills in the borderland.

The Fort Bliss Rod and Gun Club is open to the military community and to the public. It is on Fort Bliss property, but you don’t need to go through a gate to get there.

It closed on March 25 and reopened on May 21 with some restrictions. Its restaurant offers limited dine-in service  inside and on the patio. Takeout is also available.

Its ranges have limits on how many people can shoot at a time, among other restrictions and safety requirements.

“Our range is a really safe place to shoot,” McWeeny said. “We’re aware that many people enjoy shooting out in the desert. However, that is a dangerous practice.

“Here, patrons are all shooting in the same direction in the safest environment,” McWeeny continued.

“You don’t have to worry about someone shooting behind you because all of the firing lines are the same.”

The store does not sell guns, however, McWeeny said. Only one person is allowed in the pro shop at a time to meet social distance recommendations.

David Millis, a retired civilian, has been a life member at the Fort Bliss Rod and Gun Club since 1998.

Sergio Sanchez is a member of the Sun City 4-H Club and a student at Cathedral High School.

Sanchez comes out to the Rod and Gun Club regularly to shoot shotguns with other members of the 4-H program.

“It teaches you discipline with firearms and a lot of respect,” Sanchez said. “It is also a lot of fun and a really good challenge.”

In West El Paso, Sportsman’s Elite is a full-service gun shop that includes gunsmith and cleaning services and an indoor shooting range.

Sportman’s Elite reopened its shooting range to its members on May 25 and had a public reopening on June 1.

The gun shop has remained open during the pandemic.

“Safety is paramount,” said Richard Garcia, director of training at Sportsman’s Elite. “That is one of the reasons we offer these classes. Shooting is a lot of fun, but safety is really what we are focused on.”

Hours: 8 a.m. to 6 p.m. Tuesday-Sunday; Tuesdays are for members and active duty only. Closed Monday.

Memberships: 6-month memberships $40 to $70; yearly memberships $55 to $110; include spouse and children 6 to 17. Daily fees for non-members, $10 to $15. Memberships are being extended for three months to compensate for closure during pandemic.

Memberships: $9.99 per month; daily fee for non-members is $16 for first person and $11 each for two additional people.