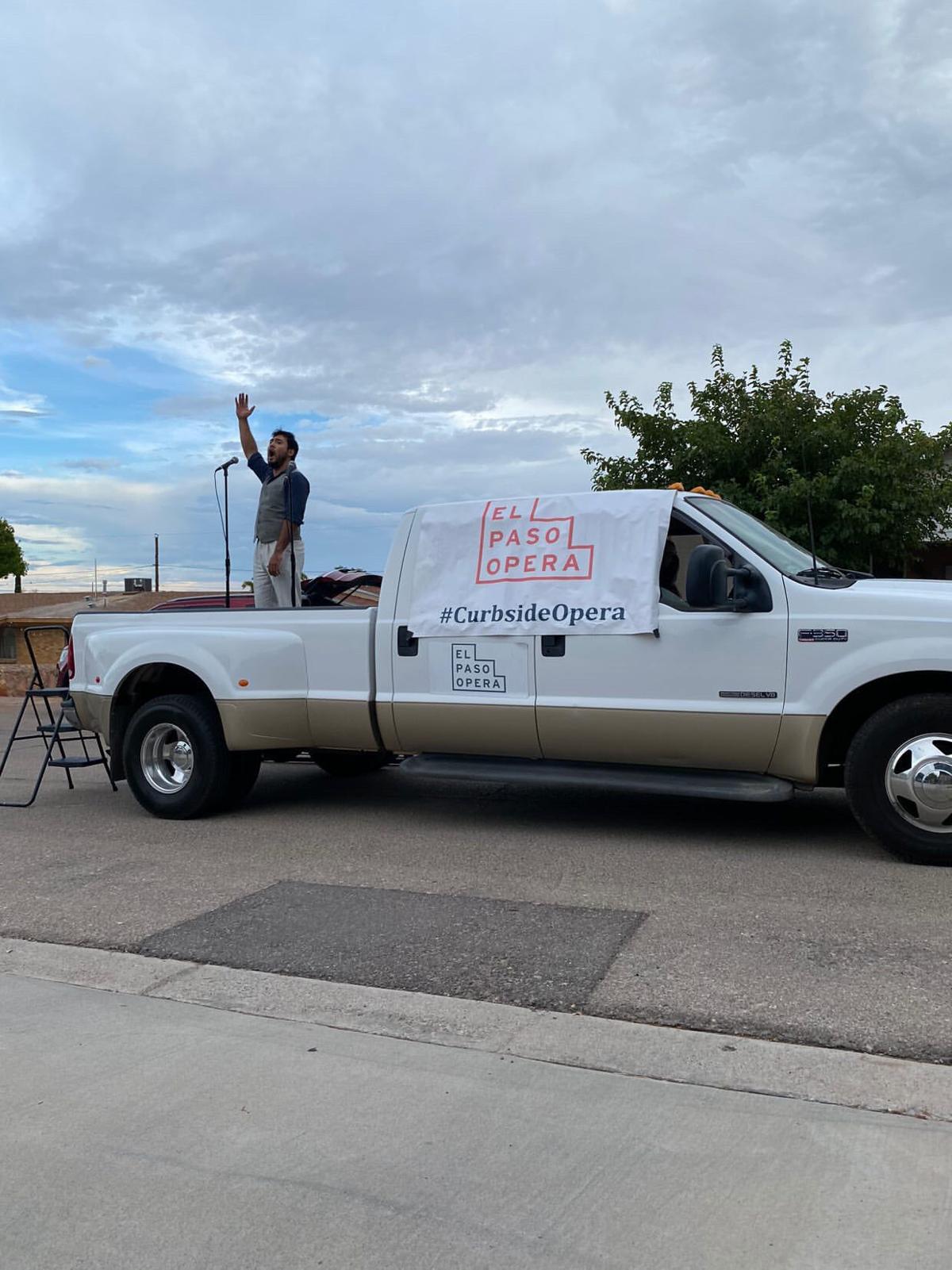 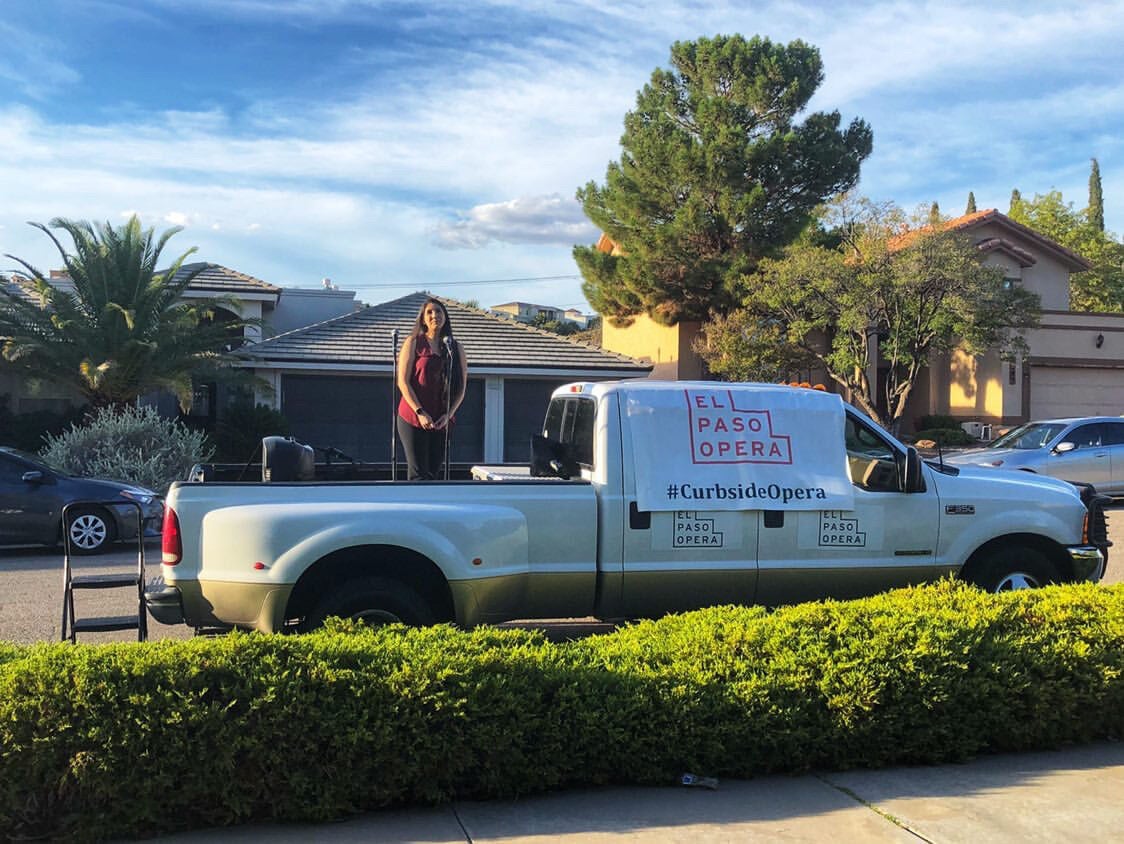 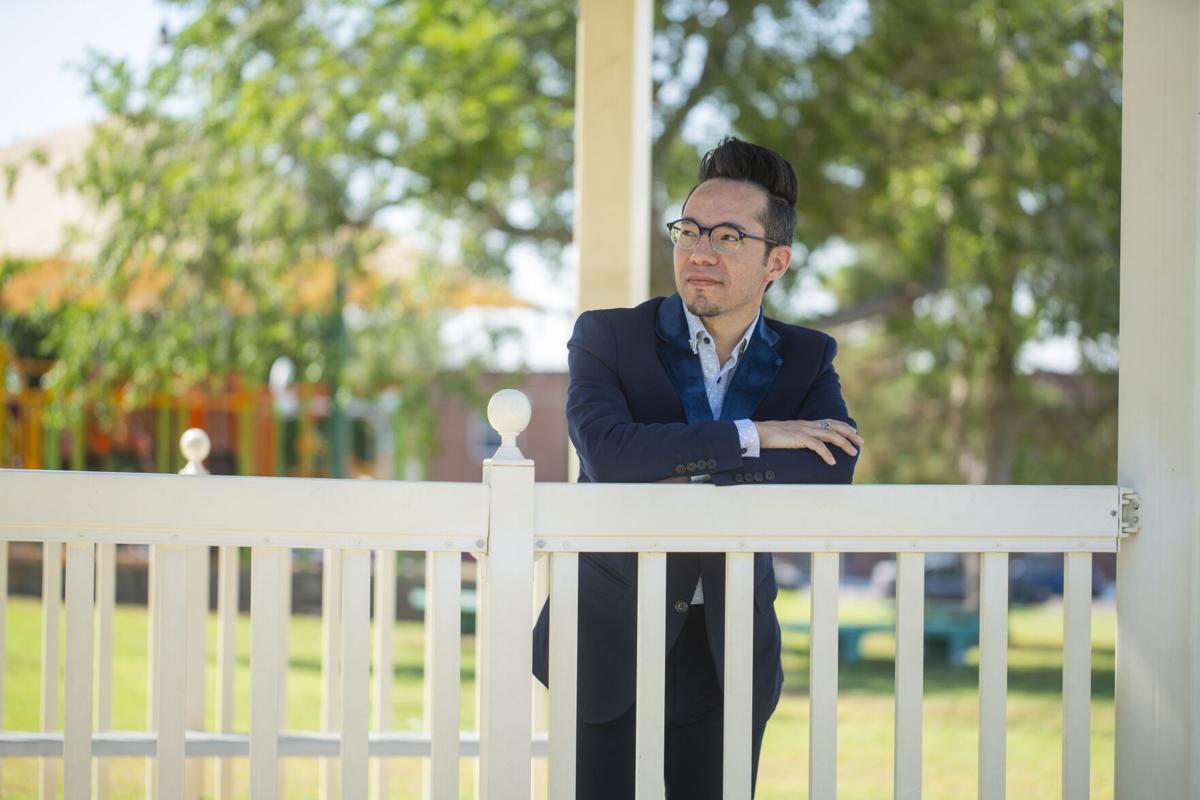 El Paso Opera has been taking the show on the road this summer with Curbside Opera, an innovative outreach program starring talented opera singers and a shiny white Ford 350 truck.

It’s been a win-win-win combination. People all over the city – from hard-core opera aficionados to first-time opera listeners – have loved having the opera come to them, the singers have loved the opportunity to perform, and the nonprofit opera group has received a financial boost during a difficult time.

“The pandemic brought deliveries to our houses and curbside pickups outside restaurants and grocery stores,” said Justin Lucero, EPO artistic director who came up with the idea in May. “I thought wecould go door-to-door to deliver opera music.”

Lucero’s response to the pandemic has put El Paso Opera on the map. Curbside Opera’s been featured in Broadway World magazine, discussed on NPR programs and may soon be replicated across the country.

After EPO executive director Arianne Marcee described it in her weekly conference calls with leaders of other opera groups, she was peppered with logistics questions.

“We post the times and place on our Facebook page and send out emails, but we don’t know if there will be any people there,” Marcee said. “It is so rewarding to drive up and find people already in their lawn chairs waiting.

Some people park their cars and listen. We call that drive-in opera.”

When the truck visited Mayor Dee Margo and Adair Margo in their Upper Valley neighborhood, they found neighbors and a few people on the mayor’s staff social distanced in chairs under some trees.

“We loved it,” Adair Margo said. “The sweetness of the moment and the beauty of the human voice in song raised to the sky – it was the essence of music. It reminded us of why we support the arts.”

At a park south of Alameda Avenue, an older woman said she had lived in the neighborhood for 66 years and had never seen anything like it.

“My son lives on the Westside and heard them sing,” she told Marcee. “He said ‘Mom, you have to see this.’”

From two to four times a week, Marcee accompanies the truck from the Lower Valley to the Upper Valley, from Downtown to Northeast. It’s a family affair: the truck belongs to her husband, Todd. Their 19-year-old daughter, Aislin, drives while 15-year-old Caia often comes along to help with set-up.

Lucero estimates they’ve made 60 stops in the last couple months. They began in mid-May by visiting Wilma Salzmann and other long-time supporters of the opera to show their appreciation.

Then they added public park visits and soon the buzz picked up and people began requesting performances.

For a $100 minimum donation, singers have shown up in front of homes to help celebrate milestone birthdays and anniversaries – or just a special evening.

“The donation offsets most of the costs and the singers have another chance to perform,” said Lucero.

EPO Resident Pianist Guillermo de la Garza records the tracks. “Opera is not stuffy,” Lucero said. “We’ve shifted people’s perspectives. After all, what could be more ‘Texas’ than having a pick-up truck for a mobile stage?”