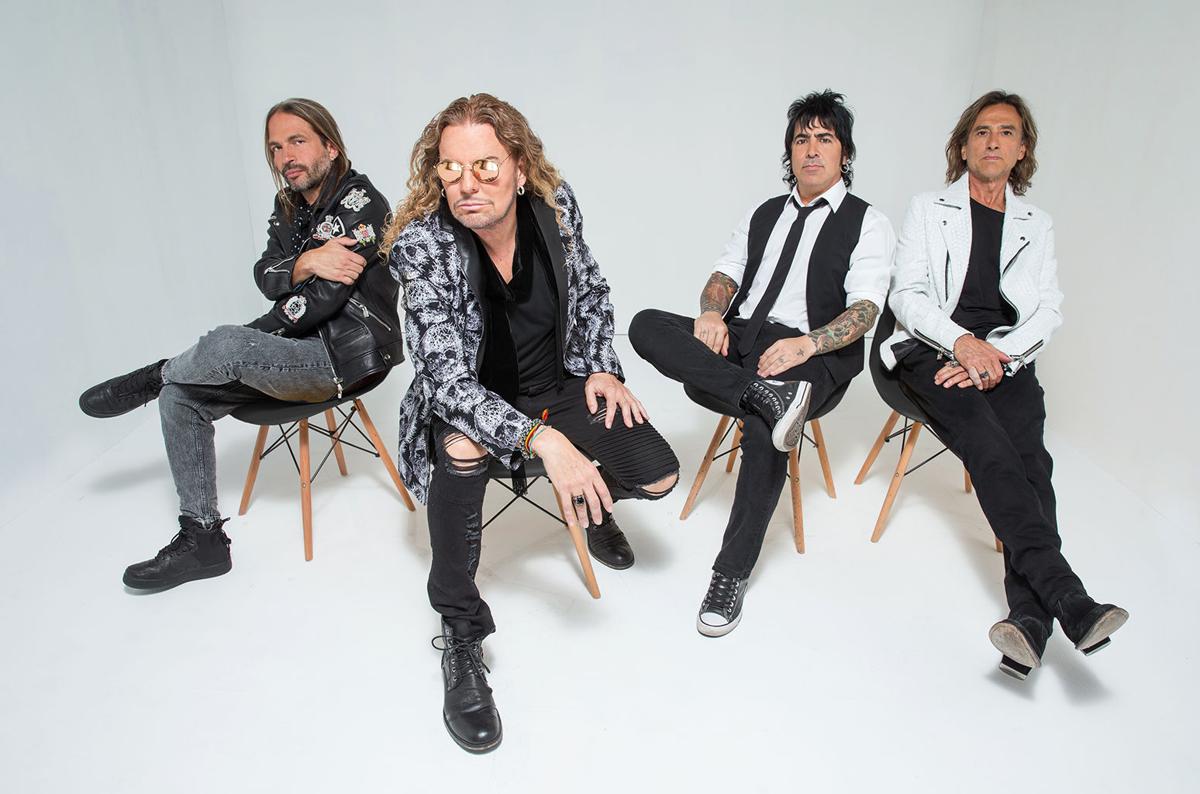 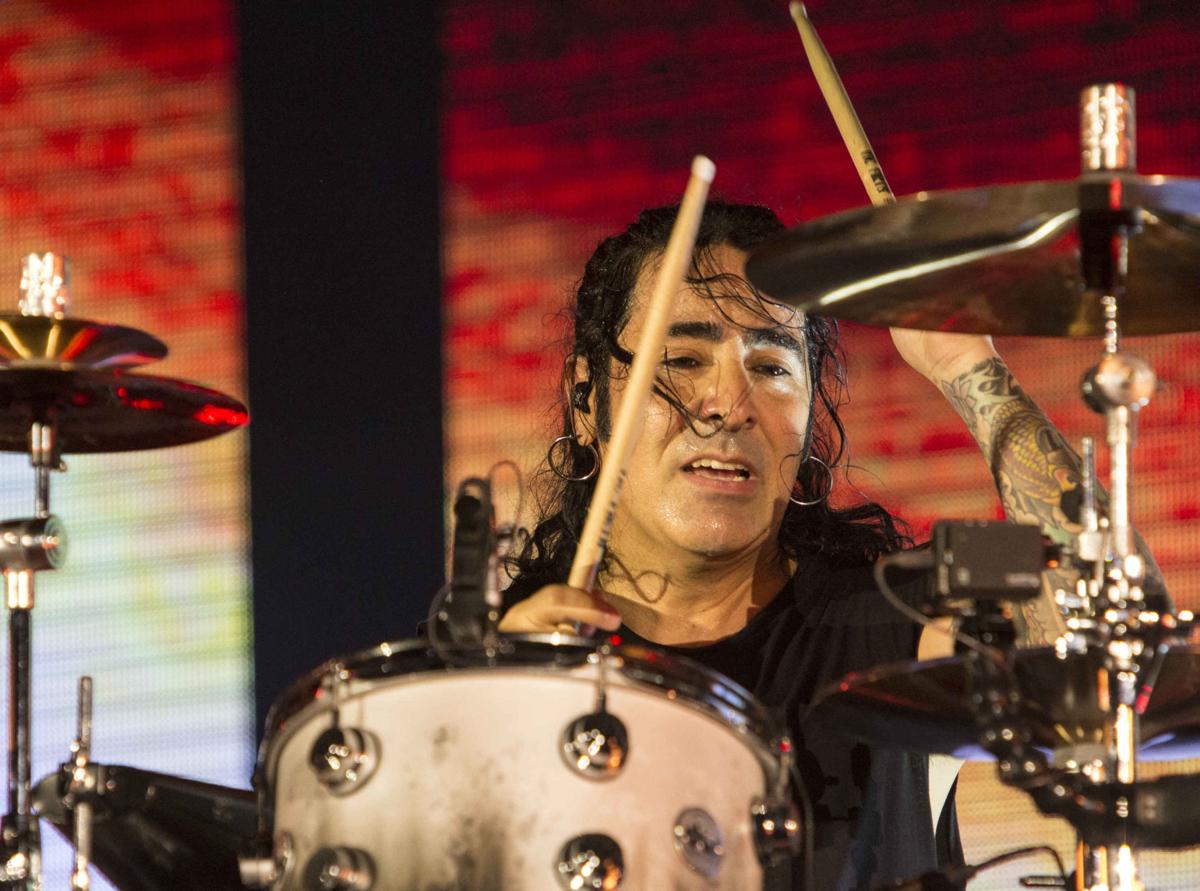 Alex Gonzalez with Maná perform during the Cama Incendiada Tour at Philips Arena on Saturday, June 27, 2015, in Atlanta. 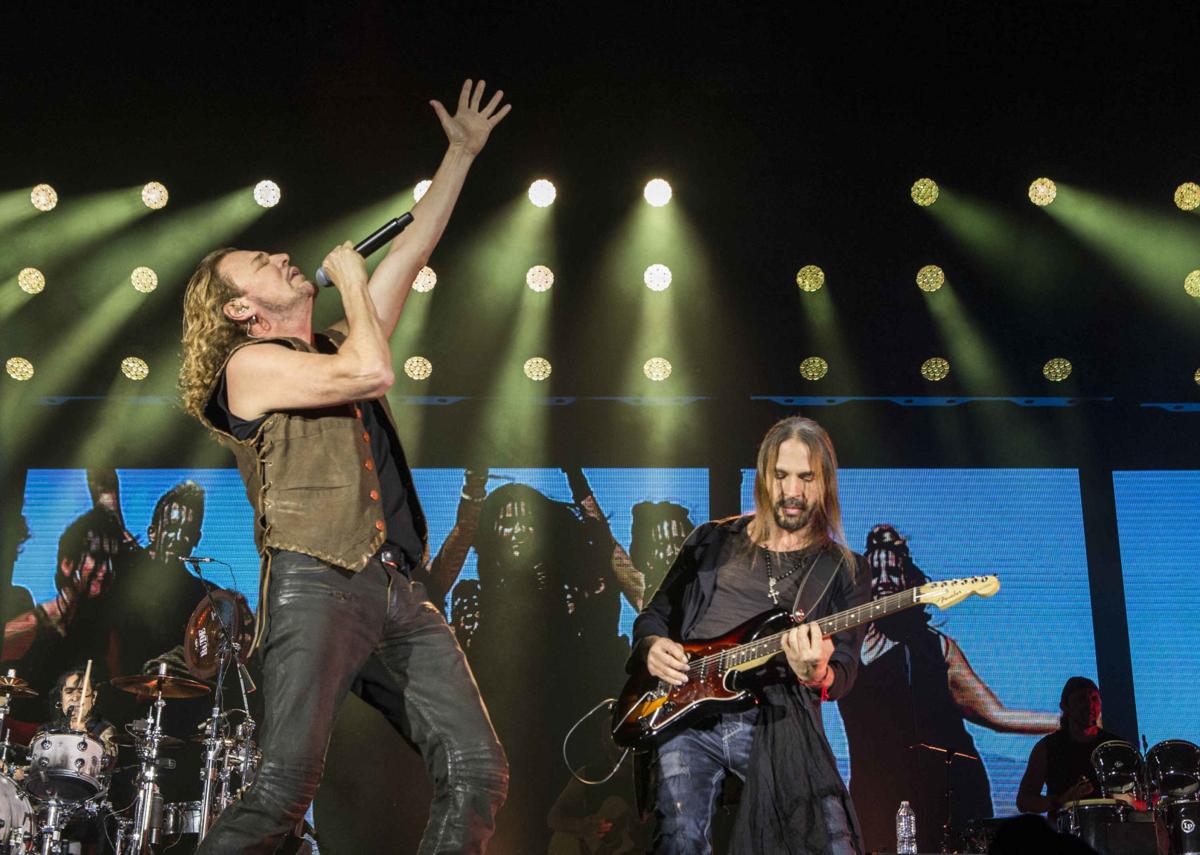 Fher Olvera and Sergio Vallín with Maná perform during the Cama Incendiada Tour at Philips Arena on Saturday, June 27, 2015, in Atlanta. 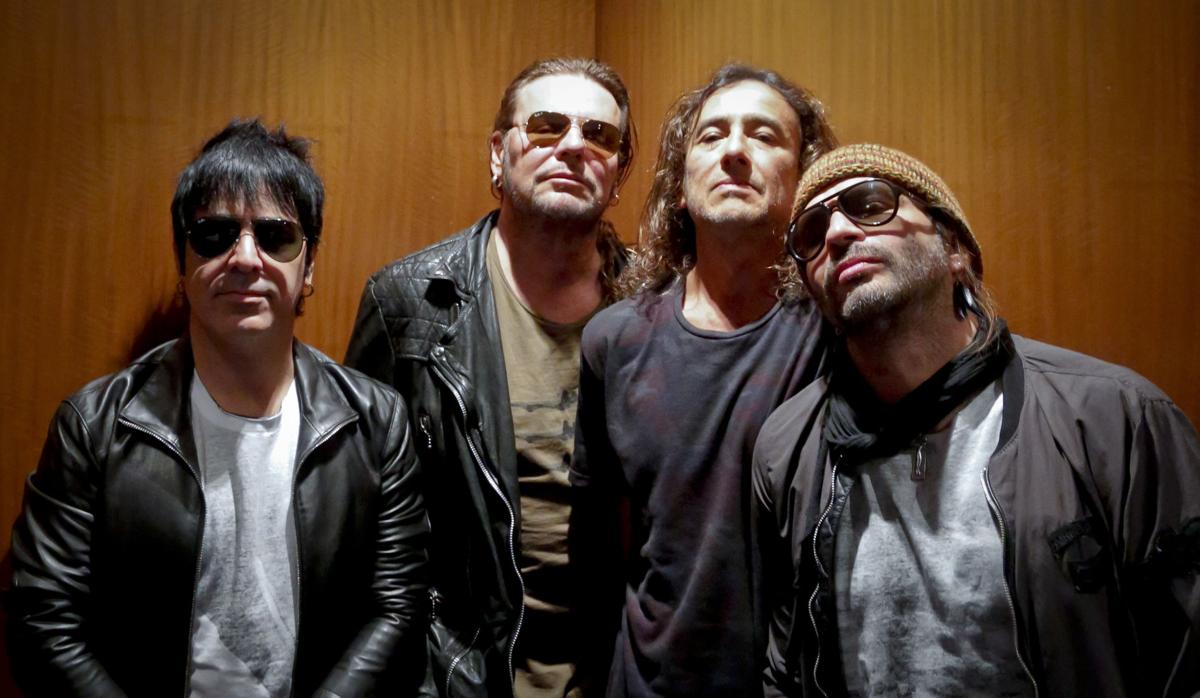 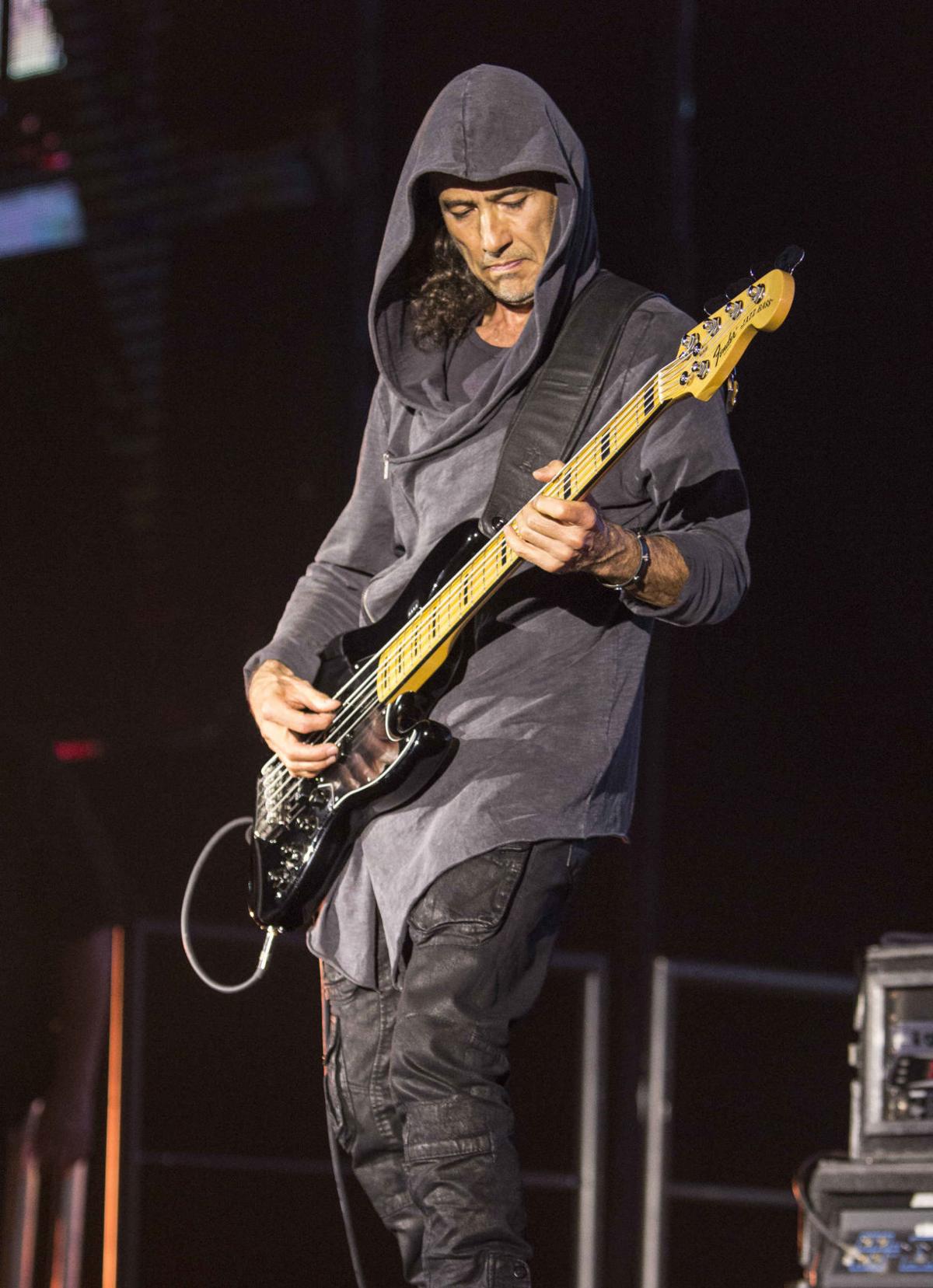 Juan Calleros with Maná perform during the Cama Incendiada Tour at Philips Arena on Saturday, June 27, 2015, in Atlanta. (Photo by Robb D. Cohen/Invision/AP) 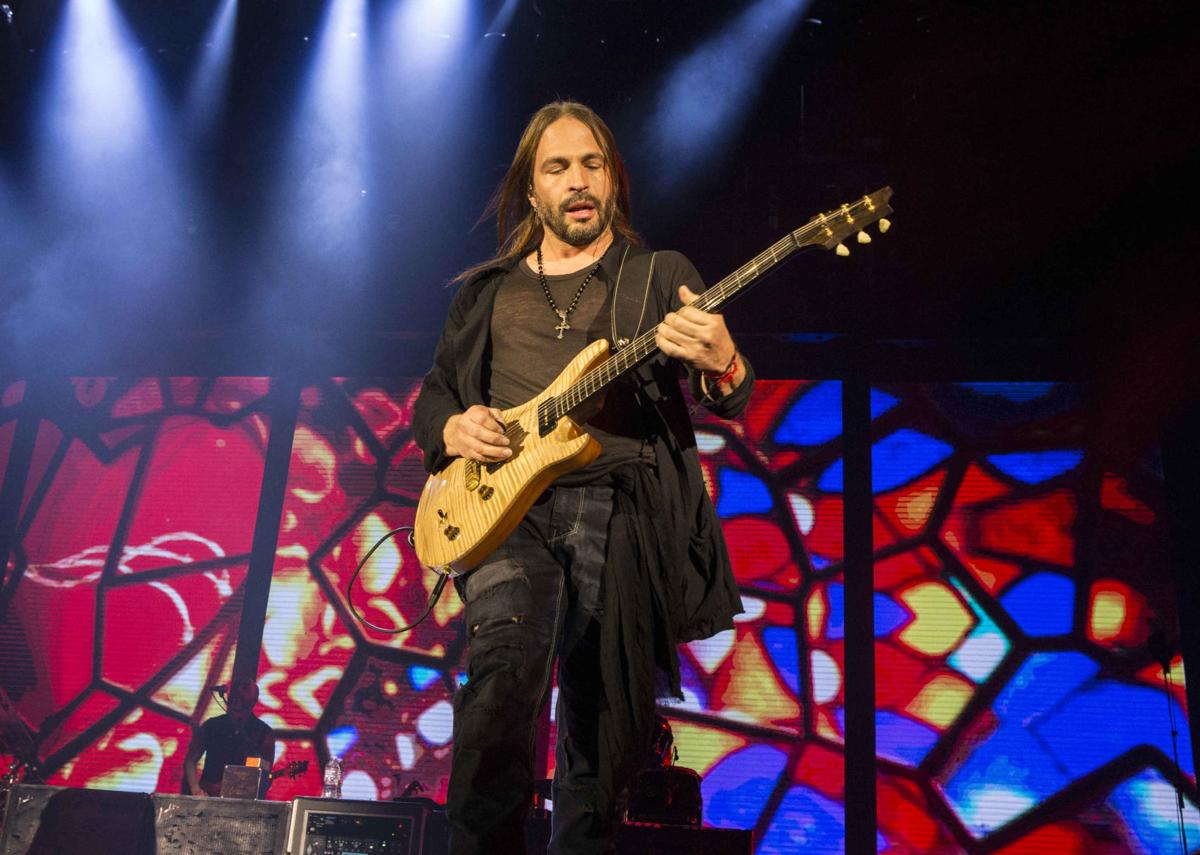 Sergio Vallín with Maná perform during the Cama Incendiada Tour at Philips Arena on Saturday, June 27, 2015, in Atlanta. (Photo by Robb D. Cohen/Invision/AP)

Alex Gonzalez with Maná perform during the Cama Incendiada Tour at Philips Arena on Saturday, June 27, 2015, in Atlanta.

Fher Olvera and Sergio Vallín with Maná perform during the Cama Incendiada Tour at Philips Arena on Saturday, June 27, 2015, in Atlanta.

Juan Calleros with Maná perform during the Cama Incendiada Tour at Philips Arena on Saturday, June 27, 2015, in Atlanta. (Photo by Robb D. Cohen/Invision/AP)

Sergio Vallín with Maná perform during the Cama Incendiada Tour at Philips Arena on Saturday, June 27, 2015, in Atlanta. (Photo by Robb D. Cohen/Invision/AP)

Latin music’s most successful rock band returns to El Paso for the first time in three years on Wednesday, Sept. 11 – and again Nov. 6 after quickly selling out its first concert.

The tour is named after one of the group’s early hits, from its second of nine albums, “Falta Amor.”

The song helped kick off Maná’s long run of hit albums and singles and a career that has garnered four Grammy Awards, eight Latin Grammy Awards and 19 Billboard Latin Music Awards – as well as many more worldwide.

While perhaps not musically groundbreaking, Maná was the first “rock en español” band to breakthrough in the U.S. and show how big the market was for Spanish-language pop and rock music in this country.

Maná, whose name means positive energy, is set to release its latest album this year, featuring an updated version of “Rayando El Sol.”

The 2019 version turns the popular ballad into a duet between lead singer Fher Olvera and Spanish singer-songwriter Pablo Alborán, while stripping it down to a harmonica and acoustic guitar.

Besides “Rayando El Sol,” fans can probably expect a career spanning setlist at the Don and a trip down memory lane.

So, here’s a playlist to get you warmed up:

Early comparisons to Sting and The Police aside, this track from Maná’s breakthrough third album “Donde Jugarán los Niños?” with its ska-lite feel and Olvera’s trademark inflections, is still a bop and a good way to start your playlist or your day.

Buzzfeed calls it “the greatest rock song of all time … if you’re not frio or aburrido.” Agreed.

It doesn’t matter who you are or if you’re a fan of Maná –when this song comes on at a bar,  club,  wedding or quinceñera, you’re singing along right from the first line, “Tu sabes como te deseo,” to the big chorus, “Oye mi amor, no me digas que no!”

Even your cholo uncle knows the words. In El Paso, it’s as inescapable as Chico’s Tacos or 100-degree summers.

While this song was released as a single off 1997s “Sueños Liquidos,” this is still a deeper cut in the band’s vast catalogue of hits. The song finds Maná experimenting with programmed drums in the intro before the bewitching melody and Spanish guitars take over. It’s easy to forget this is a Maná song until those reggae guitars and Fehr’s wails come in.

But back to the hits: Maná teamed up with Carlos Santana for this song off his mega-hit album “Supernatural” in 1999.

This is peak ‘90s Latin explosion and the band really brought it, with Santana’s searing guitar solo and the big sing-along chorus. It’s really a perfect blend of Maná’s pop hooks and Santana’s Afro-Latino-influenced rock – and it was a Top 40 hit in the U.S. despite being sung entirely in Spanish.

You can’t make a Maná playlist without a ballad. “Mariposa Traicionera” took the sentimental lyrics and feel of ’90s ballads like “Vivir Sin Aire” and updated it with more Latin influences.

That combo and a video starring Argentinian actress Julieta Diaz took the song to No. 1 on Billboard’s Hot Latin Tracks chart in 2003. It became the group’s biggest hit.

If this song doesn’t scream, “last call,” you probably weren’t old enough to be at a nightclub in El Paso (or Juárez) in the 1990s.

It’s not your typical Maná song.

But it’s definitely an anthem.

‘Me Vale,’ sung by drummer Alex González, is still a fan and live concert favorite for those who couldn’t “give a damn” what others think about them.

for his wild drum solos