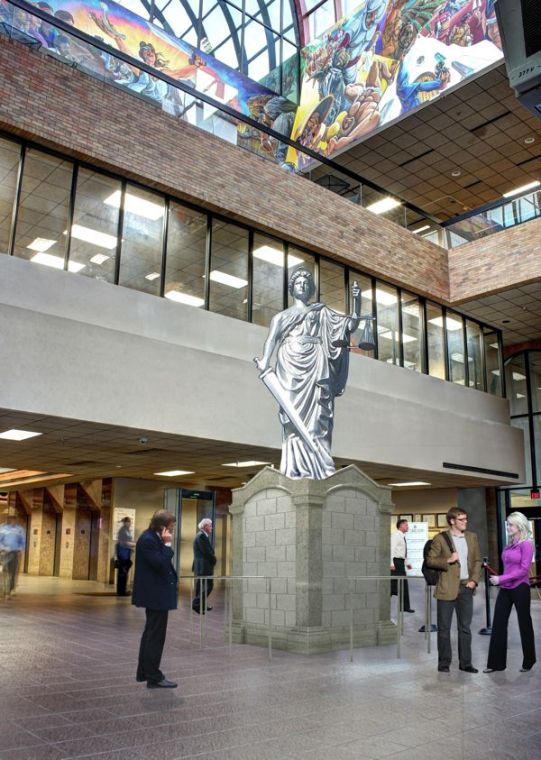 An artist’s concept shows the Lady Justice statue in the lobby of the El Paso County Courthouse. 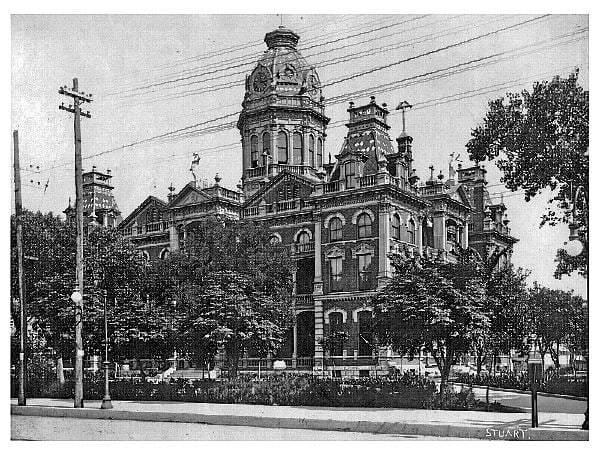 Two Lady Justice statues are visible in this photo of the county courthouse that was built in 1896 and demolished in 1917. Only one of the statues survives. 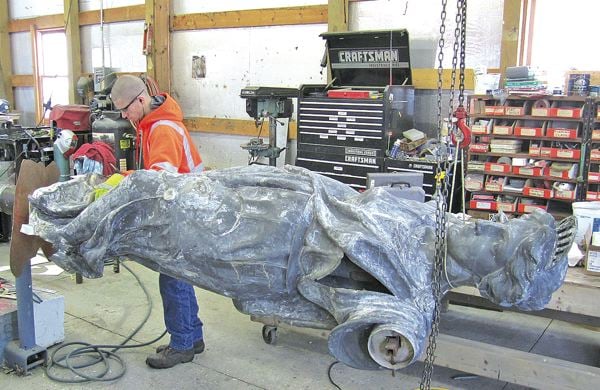 Craftsmen at the McKay Lodge Conservatory in Ohio worked all last winter to restore the statue.

An artist’s concept shows the Lady Justice statue in the lobby of the El Paso County Courthouse.

Two Lady Justice statues are visible in this photo of the county courthouse that was built in 1896 and demolished in 1917. Only one of the statues survives.

Craftsmen at the McKay Lodge Conservatory in Ohio worked all last winter to restore the statue.

Lady Justice has been restored and returned home to El Paso.

But right now she’s lying in a wooden crate at the El Paso County Sheriff’s Office awaiting her long-delayed installation in the county courthouse Downtown.

The rare zinc statue of Lady Justice wielding a sword and scales stood atop the 1886 El Paso County Courthouse before the building was demolished 95 years ago.

The statue has been called a “true American artifact,” an icon of El Paso legal history, and is one of only six known to still exist in the United States.

But it only narrowly survived its decades-long journey, which began on the roof of the grand courthouse and ended in Ascarate Park – missing some parts and deteriorating – when a local judge launched an effort to save it.

Now the statue has been painstakingly restored, and the El Paso Bar Association needs to raise at least $75,000 for a pedestal and interpretive rail that would tell the history of the statue.

When then El Paso Chief Justice David Willington Chew first saw the 8-foot statue, her gown was shredded, her scales and sword missing, and one of her feet was nearly severed. Exposed to the elements and a target of vandals, justice was nearly lost.

It’s a description that might also have fit the county, which has been the subject of a public corruption investigation since FBI agents raided the county courthouse several years ago.

The symbolism is not lost on Rosemary Neill, director of El Paso County Family and Community Services, who worked with the El Paso Bar Association and El Paso Community Foundation to rescue the statue.

“When you step into the (county courthouse) lobby right now, it is just an empty space. But once she’s returned, you’ll see that symbol of justice and it will remind everybody how important these concepts are,” Neill says.

The ornate 1886 El Paso County Courthouse, which looked like something from a Dickens novel, was built during a courthouse building boom in America. Statues were all the fashion then, and even the smallest communities wanted one grace their new courthouse. But bronze statues were prohibitively expensive for many, says Carol Grissom, senior objects conservator at the Smithsonian Institution’s Museum Conservation Institute in Maryland.

“The sheet metal statues were suitable, and, from a distance, you couldn’t tell the difference because they were covered in white paint,” says Grissom, who wrote the book on zinc sculptures in America.

The Lady Justice statues were made of thin metal supported by an armature, making them “a little flimsy,” so not many remain, Grissom says.

The Lady Justice statue in El Paso lost her home when the red brick Victorian building courthouse was demolished in 1917 to make way for a larger courthouse. That courthouse, which did not have a place for a statue on the roof, was also demolished, replaced by the 12-story glass tower where county government is today.

The Lady Justice statue was moved to various public spots and was eventually placed next to the old Liberty Hall, also now demolished, where the El Paso Symphony Orchestra played.

The statue spent some time in storage in a county warehouse and even some time at a farm in the Lower Valley, Neill says. Finally, she was placed in a wrought iron enclosure at the entrance to Ascarate Park.

The dilapidated statue was largely ignored until Prince McKenzie, curator of the El Paso Railroad and Transportation Museum, brought the statue to Justice Chew’s attention.

In 2007, El Paso County Commissioners Court approved a request by the El Paso Bar Association to restore the statue. The county tapped its hotel occupancy tax revenue, which can be used for historic preservation, to fund the $34,355 restoration, Neill says.

“So many times she had been smashed from the outside. We are not talking about a dent like a softball, but here whole body got smashed,” Podnar says.

The restoration, using the original construction techniques, took all last winter. “You really have to take your time,” Podnar says, “and every day you make a little more progress.”

Craftsmen were able to save the original material and, where pieces were missing, they used another surviving Lady Justice statue as a reference to fashion new parts, according to Podnar.

So how much is the statue now worth? “That’s in the eye of the beholder,” says Grissom.

Now that the statue has been restored, the El Paso Bar Association wants to put it in a more prominent position in the county courthouse. But the association needs to raise $75,000 for a 7-foot pedestal and display area that would tell the history of the statue and her restoration.

Progress on the fundraising has been slow, says Neill. She wouldn’t say how much has been raised so far, but the bar association hopes to meet its fundraising goal by the end of the year and “return Lady Justice to her rightful place in the county courthouse,” Neill says.