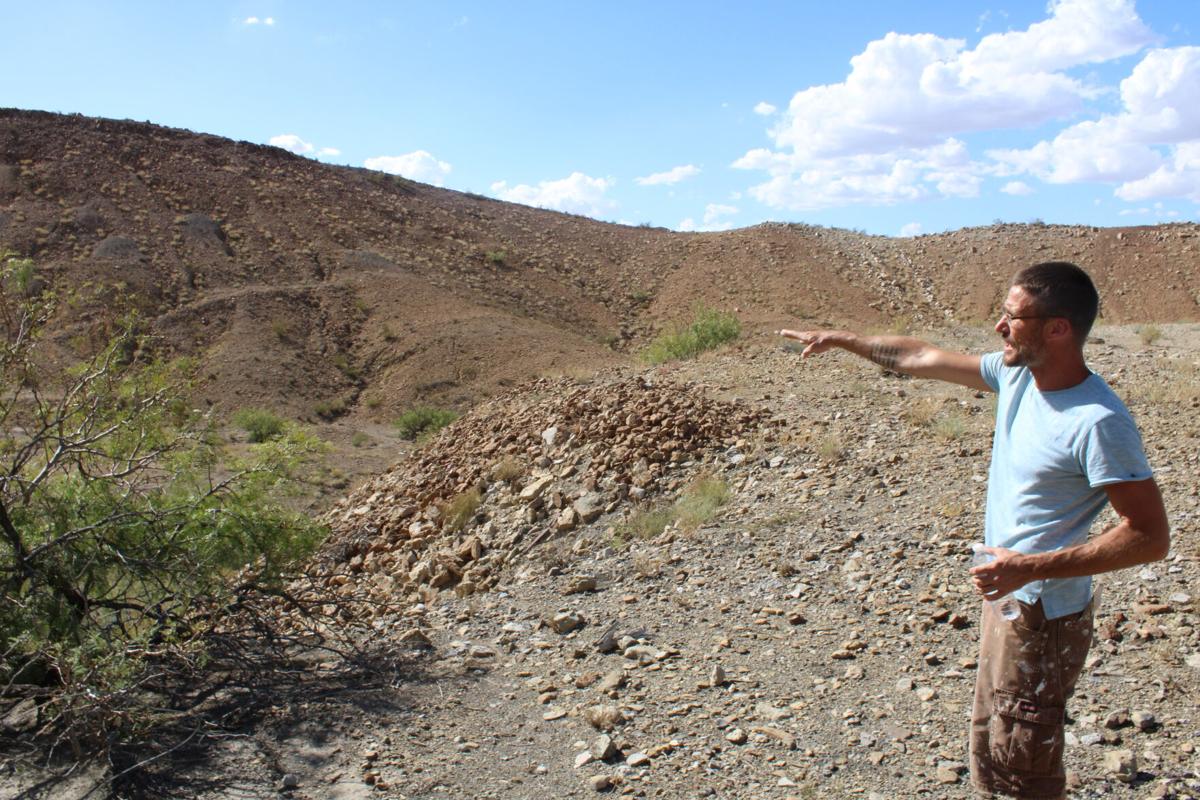 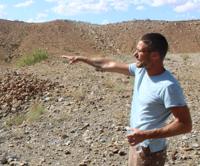 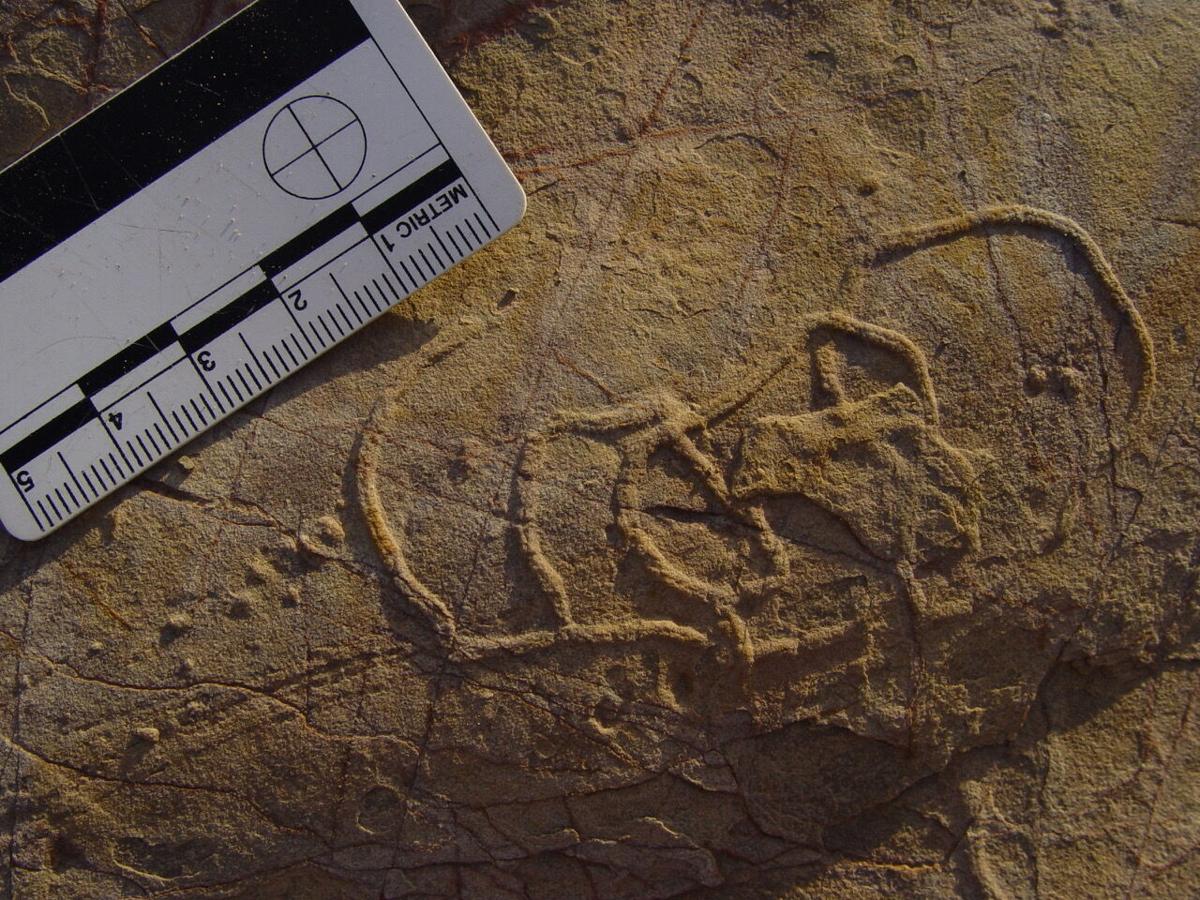 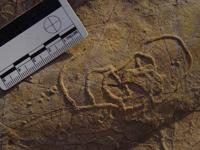 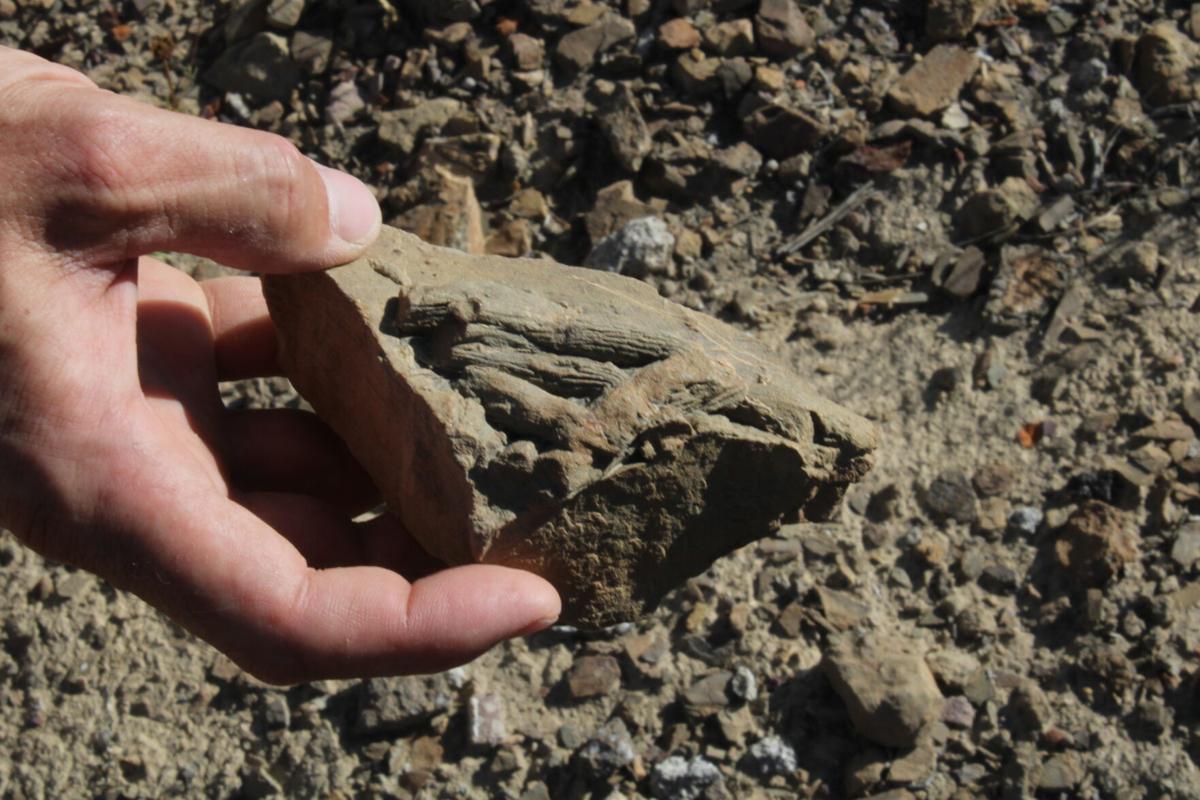 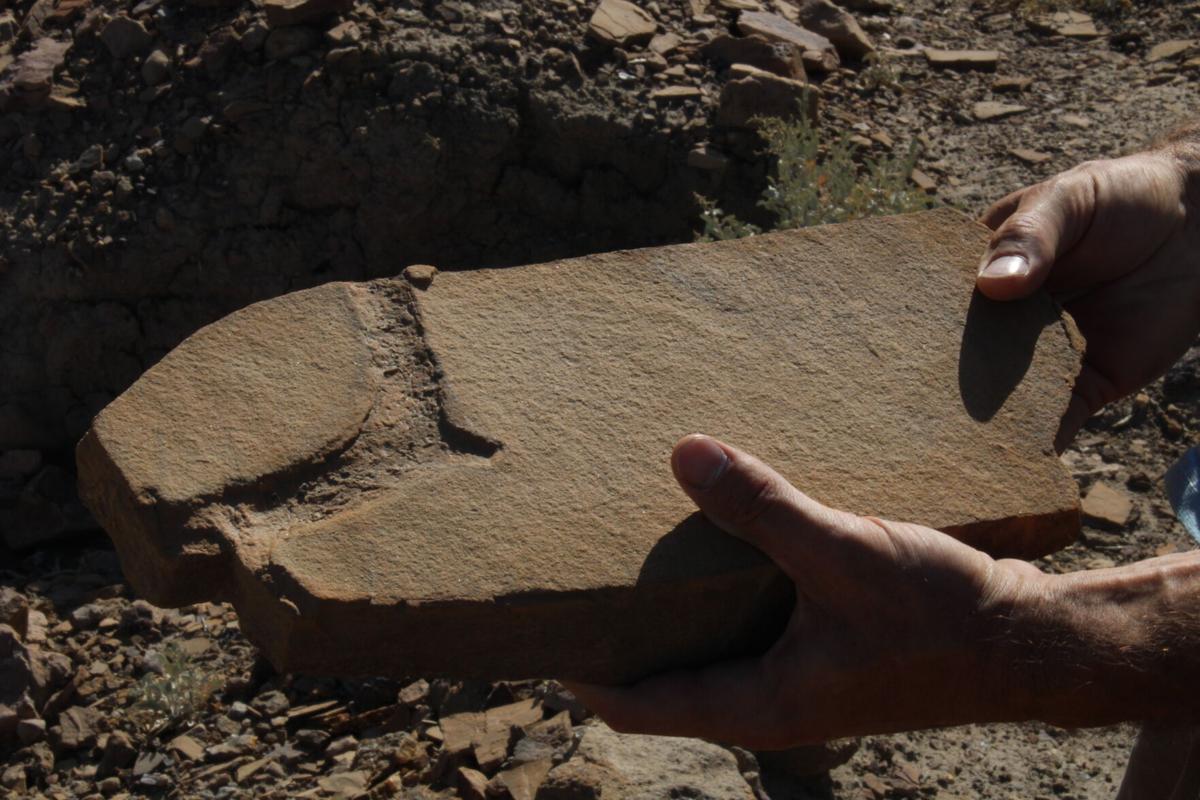 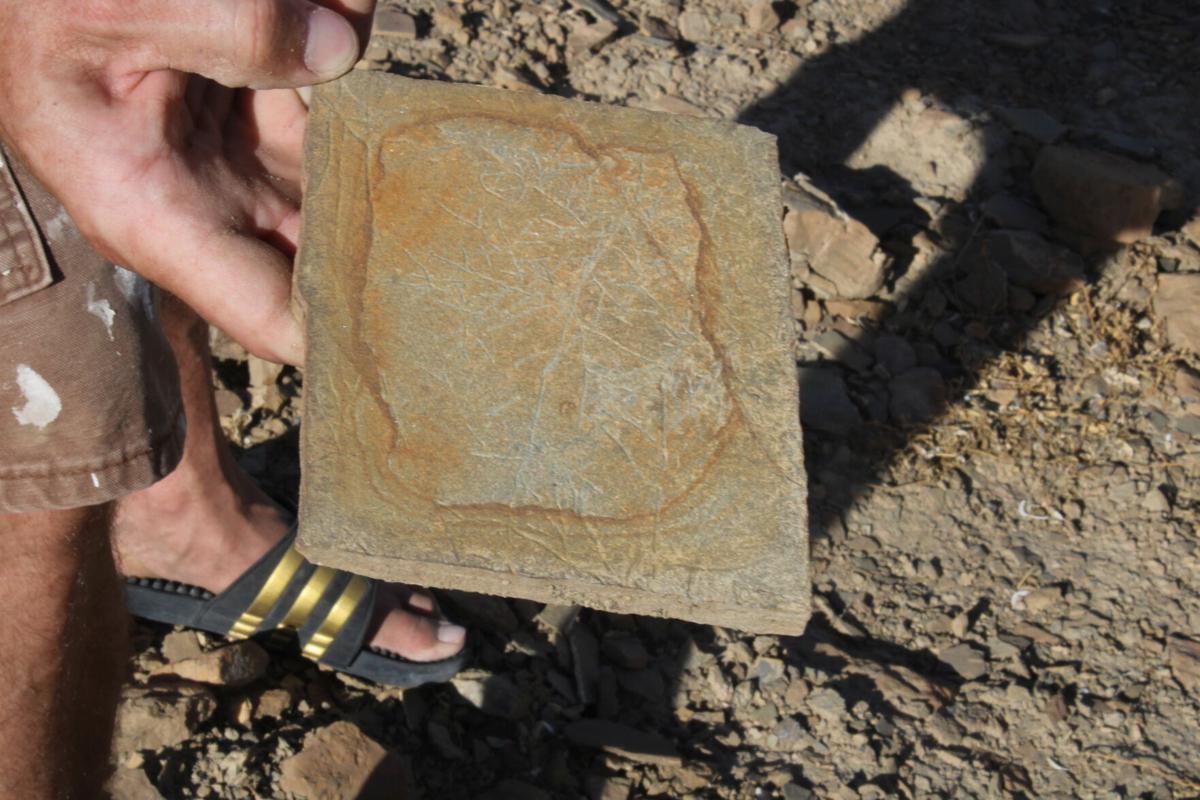 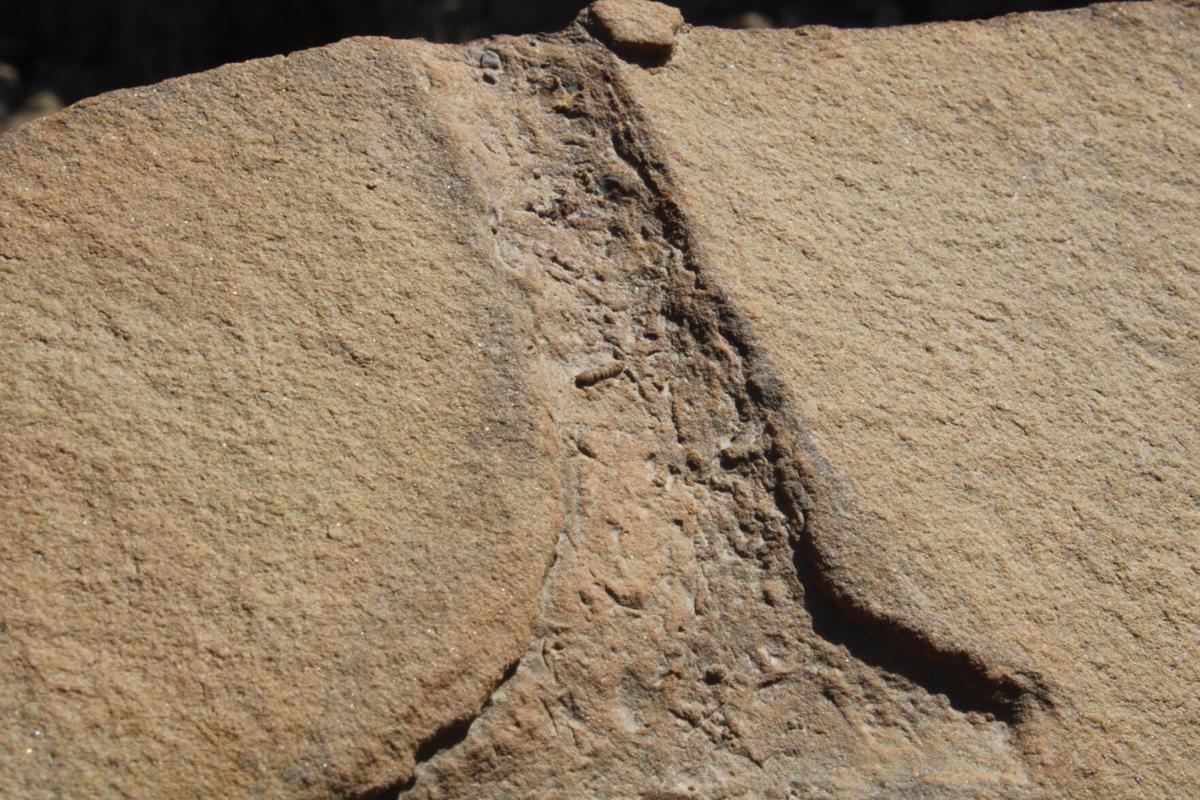 A close-up photo of a shrimp burrow. 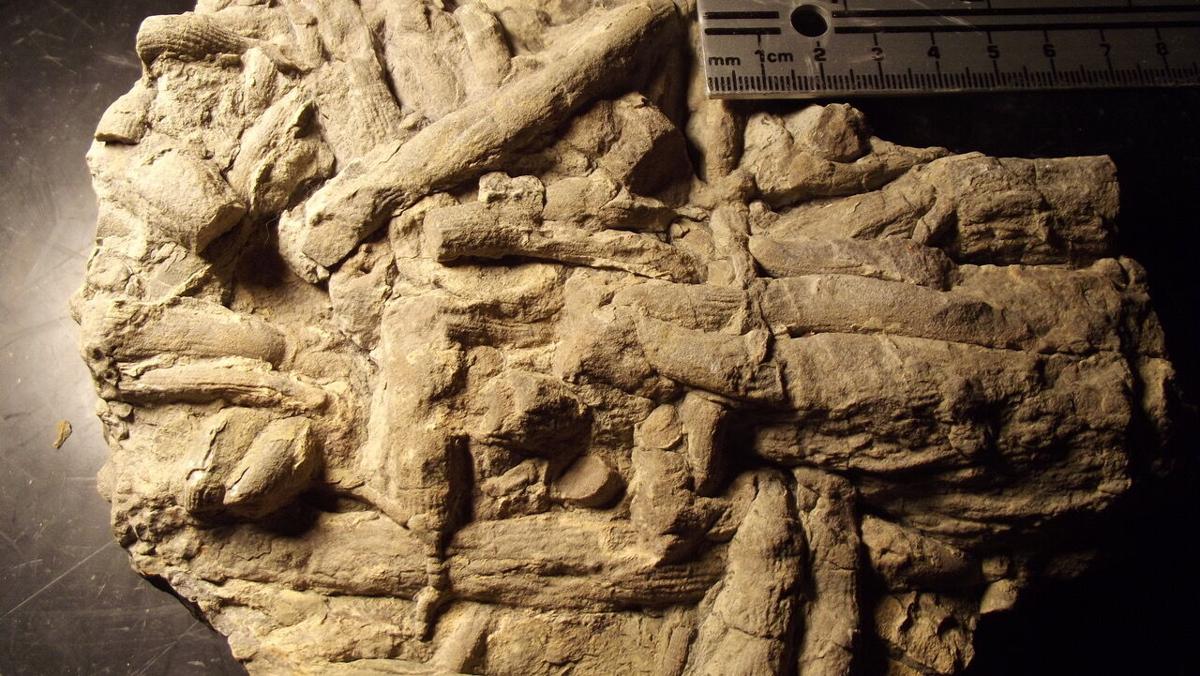 These burrows were made by either a spiked worm or arthropod, geologist Eric Kappus said.

A close-up photo of a shrimp burrow.

These burrows were made by either a spiked worm or arthropod, geologist Eric Kappus said.

Geologist Eric Kappus hands me a rock with raised lines that looks like a tree branch is embedded into it.

“Those are worm burrows. This fossil was probably formed when a storm came and swept a whole bunch of sediment into the burrows. One-hundred million years later, it’s in your hand.”

Kappus is in his natural habitat.

He’s standing barefoot on a 100-foot pile of rocks in the shadow of Mount Cristo Rey – ground zero for his latest research on the astronomical number of fossils that have been found there in the last two decades.

In 2002, Kappus was still in graduate school when he discovered dinosaur tracks in the quarries around Mount Cristo Rey, kicking off a renewed interest in the region’s geological history.

In 2018, Kappus discovered a new species of invertebrate called Cardioichnus biloba (It’s okay, you don’t have to pronounce it), a discovery that has helped put Cristo Rey in the national geological spotlight.

Most recently, Kappus published a scientific paper in New Mexico Geology – an online forum that publishes peer-reviewed research papers – on the 30 new kinds of trace fossils that he’s discovered at Mount Cristo Rey. The paper was published with Spencer Lucas, curator of the New Mexico Museum of Natural History and Science in Albuquerque, and introduces one of the fossils Kappus named for Mount Cristo Rey.

Why are there so many fossils at Mount Cristo Rey? As Kappus and I walked around the mountain, the answer was literally beneath our feet.

“Between the 1890s and the 1950s, this whole area was quarried to make bricks, so all of these rocks were blasted out of the mountain and all of the tailings – stuff that wasn’t used – was thrown into a huge pile over here,” he said, pointing to a huge mound beside the railroad tracks.

“All of these rocks were buried for millions of years, and now they’re everywhere! Same goes for the dinosaur tracks. I never would have found those if there hadn’t been quarrying.”

No bones about it

But the fossils that Kappus is studying aren’t just bones – in fact they’re not bones at all.

“I don’t do body fossils, I do fossilized behavior,” he said. “With trace fossils, you can learn how animals lived their daily lives. More than just what they looked like.”

Kappus points out a set of dinosaur tracks of varying sizes as an example.

The wide variety of fossils found at Cristo Rey is indicative of the environment in the region millions of years ago.

On our trek, Kappus and I constantly come across pieces of fossilized oysters and other sea creatures – giving away that the area was once underwater.

“If you want to know about an environment, you want to know what kinds of creatures are doing what where. If we find fossilized crab burrows, then it’s safe to conclude that what we’re looking at was once a beach,” Kappus said. “So this is the forefront of environmental interpretation.”

All of this evidence paints a fascinating picture of El Paso when dinosaurs roamed the Earth: 65 million to 100 million years ago, the entire heartland of North America was covered in a vast, shallow inland sea called the Western Interior Seaway. The Franklin Mountains were likely an island just off the coast.

Dinosaurs of all kinds walked along the beach and swam near the shore that is now Mount Cristo Rey. Kappus said that this beach stretched all the way to Alberta, Canada, and is referred to as “the dinosaur freeway.”

Kappus, who is now a geology professor at Southwest University, said he got his curiosity about understanding the past through artifacts and remnants from his father.

“My Dad could find any kind of metal parts on the side of the road and tell you exactly what it was, what it was used for, what engine it came off of and I was always fascinated by that. I guess I’m the same way now, but with fossils.”

Calling Cristo Rey his backyard, Kappus ended up in El Paso through the University of Texas at El Paso, where he obtained his doctorate and his master’s in geological sciences.

“There’s a renaissance going on at Cristo Rey. There is definitely a resurgence of research here related to the fossils. And that’s just the beginning. There are rocks in the Franklin Mountains that are 1.2 billion years old.”

These are among the trace fossil discoveries made by El Paso geologist Eric Kappus, from top:

A surface feeder such as a nematode worm likely left this track.

This is an imprint made by either a spiked worm or arthropod.

This mark was made by a crustacean, like a shrimp.